We went out to Red Ledges for a pizza party picnic this evening and this time we knew exactly where to go to find the arch (and everyone laughed about how difficult it had been for us to find it the first time we came). We set up our picnic right below it and the kids wolfed down their dinner so they could go play. Dinner went relatively smoothly. Only one piece of pizza ended up on the ground (Gavin dropped his slice before he'd even taken a bite) and I only dropped, like, three cups of water (so it's a good thing we weren't at home or I'd have been mopping up water all evening). 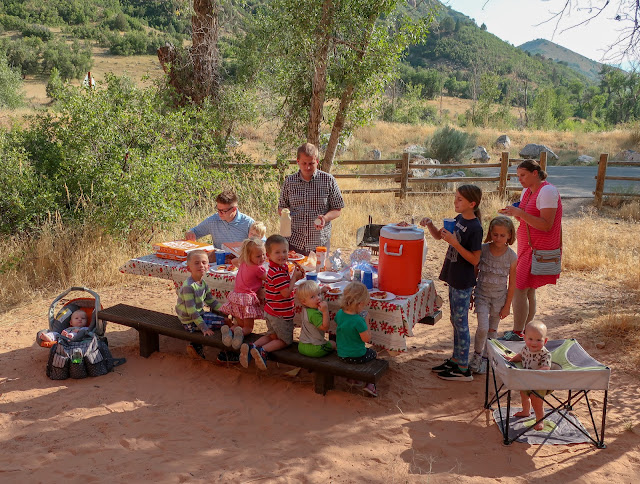 Zoë somehow ended up wearing the exact same outfit as our trip to Red Ledges in June, which is kind of wild. Andrew asked, "Does she purposely plan out outfits? Like, if I'm wearing this skirt then I need this shirt because they match well?"

It's kind of weird to have such a small child choose such a specific (and coordinated) outfit. Usually our children dress oddly when they dress themselves. I suppose Miriam was rather into coordinating her outfits, but Benjamin...well...he just dresses in whatever (Rachel wasn't a great outfit picker either (sorry, Rachel)).

Gavin likes to pee in the great outdoors and will do so without warning, anytime, anywhere. When we met up with Emily's family in Idaho a few weeks ago, Gavin somewhat-accidentally peed on Benjamin. Tonight he climbed up on a rock and peed all over the sand where the kids were playing (narrowly missing showing Zoë). Silly kid!

Auntie Emily helped Logan hike up by the arch. It's really a great "hiking" place for little kids—it's a little loop that goes up the hill and then back down, there's lots of rocks to climb on, and sand to play in. Grown ups can join in on the hiking or can sit by the picnic table to watch and make sure no one wanders off where they shouldn't. 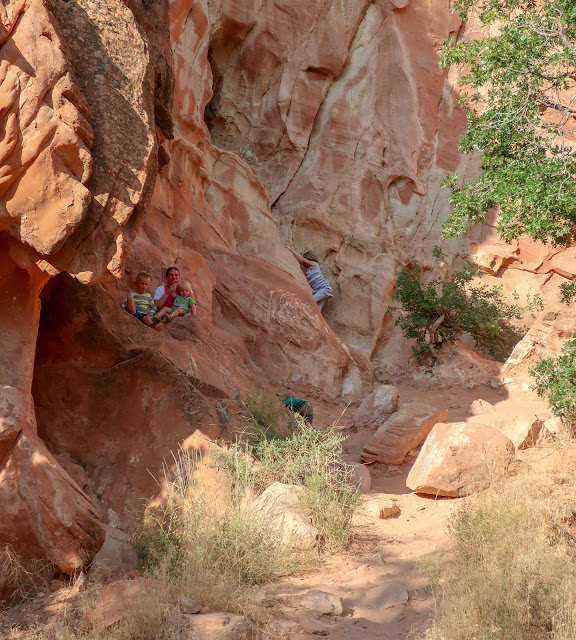 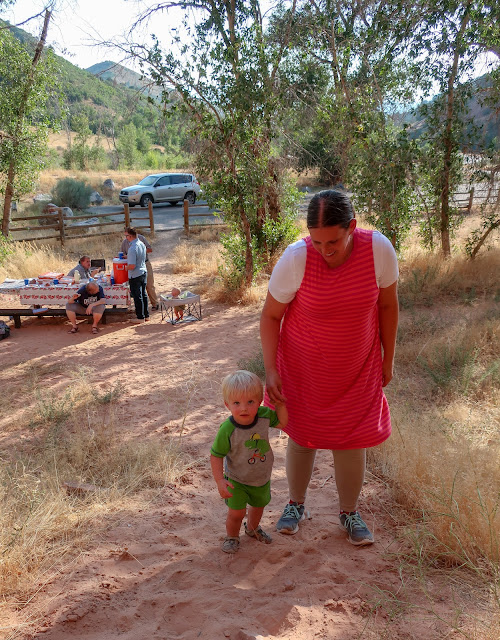 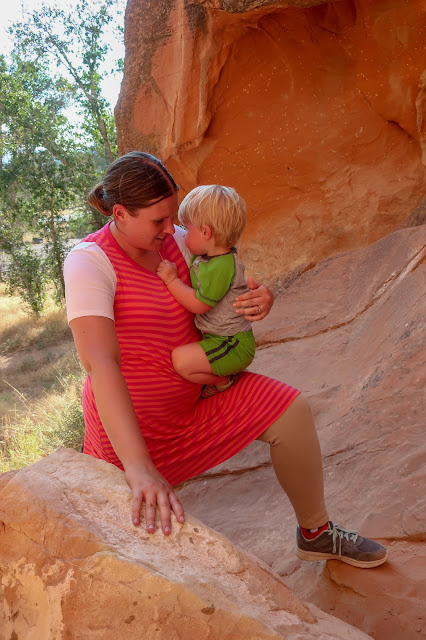 Here are the kids scrambling all around:


Zoë found a rock to carry around with her, of course. She has been so fascinated by rocks lately; everywhere we go she has to pick one up! She was so proud the first time she did the loop by herself. She popped out at the bottom and said, "Gook, Mom! I did hiked the 'oop by mine'elf!"

Rachel and Miriam focused on doing some bigger-kid climbs: 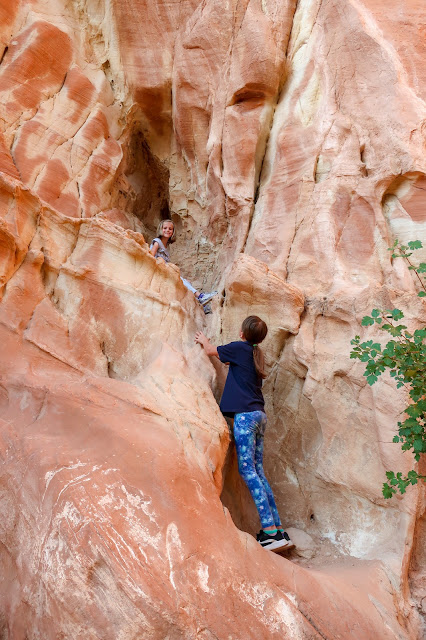 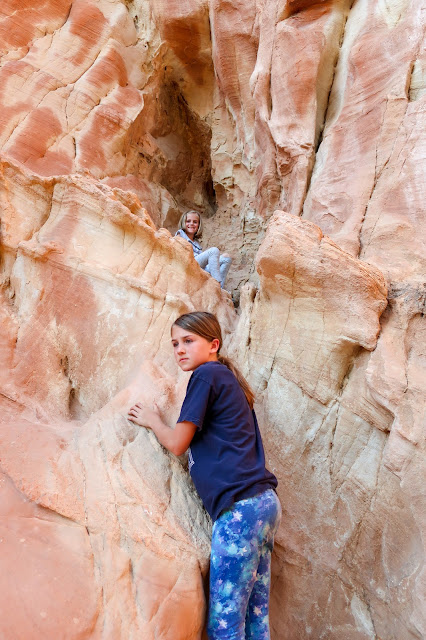 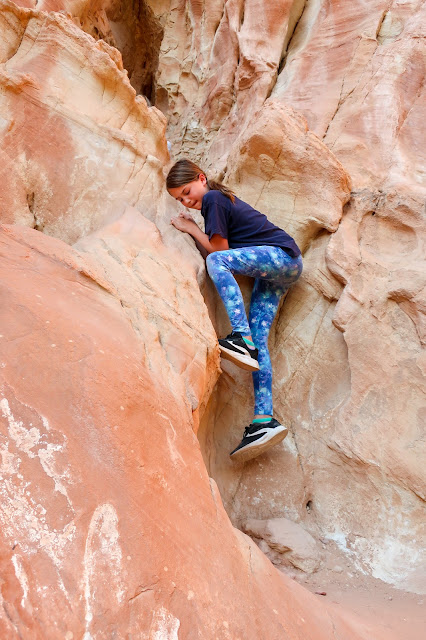 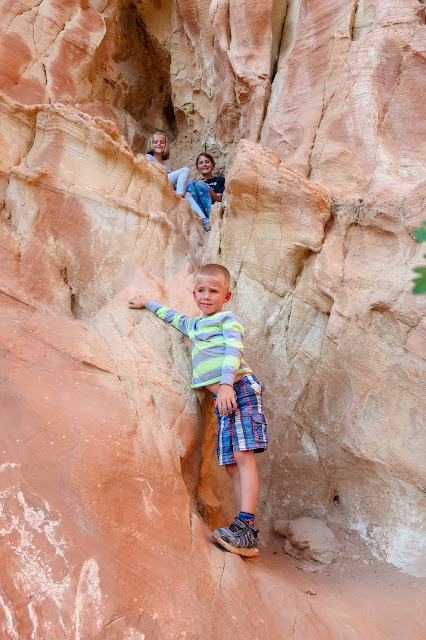 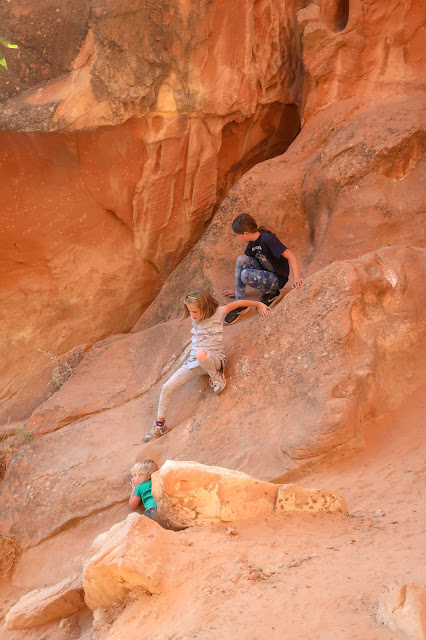 Grandma and Grandpa took on baby duty while Andrew, Jacob, and I took some of the kids up the back side of the arch (and Auntie Emily stayed behind with the smaller kids). 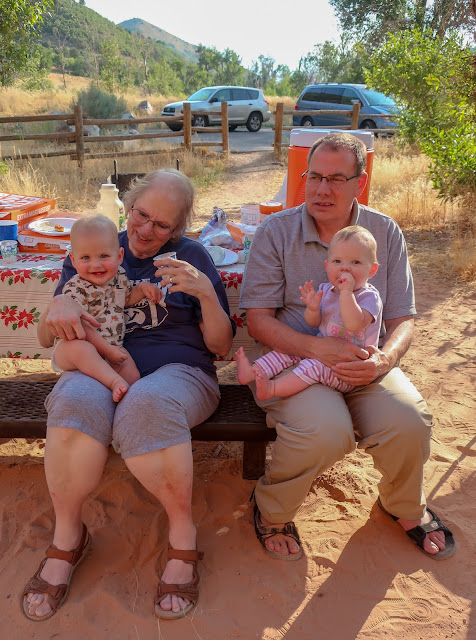 Jacob asked if he was going to be famous on our blog now and he totally is because this is my favourite shot from the day:

We're right at the arch here (was that obvious?) and could look down at the picnic table below: 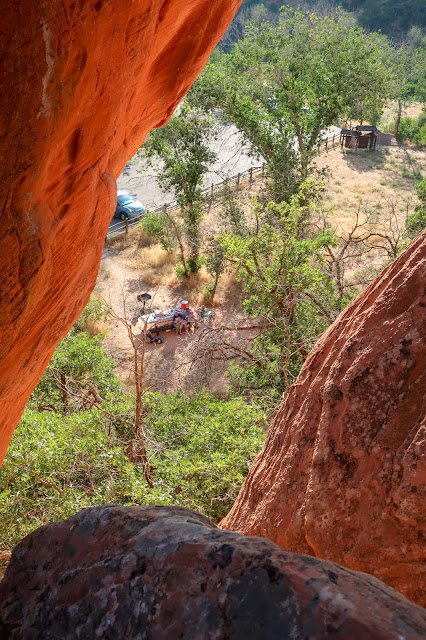 But still the kids wanted to climb higher, so higher we went (Uncle Jacob took Carter back down because the next part got a little too crazy to do while holding a toddler).

It did have some lovely views though! 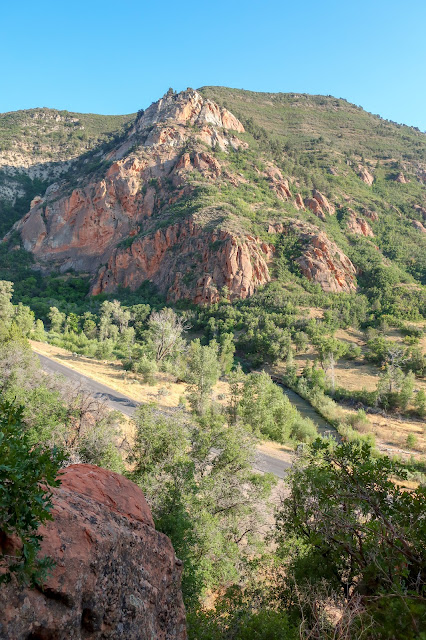 We'd hoped that we could climb to the very top of the arch, which I suppose we very well could have...but it would have involved some ropes and we didn't feel comfortable doing that (though someone had very kindly left a rope tied to a...something): 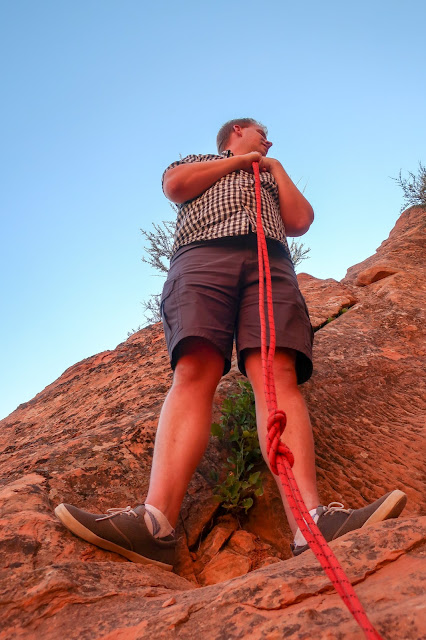 So instead we climbed around for a bit before heading back down to relieve Andrew's parents: 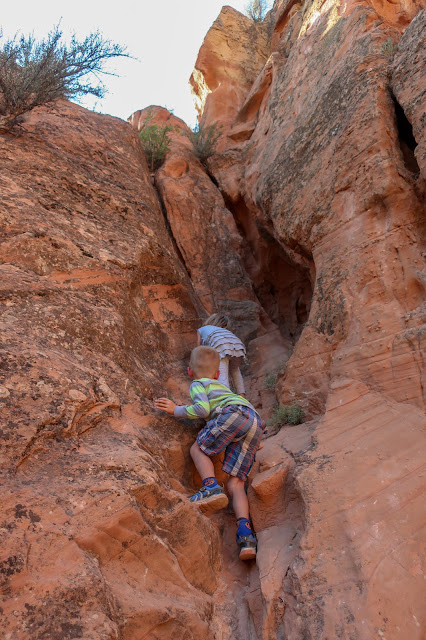 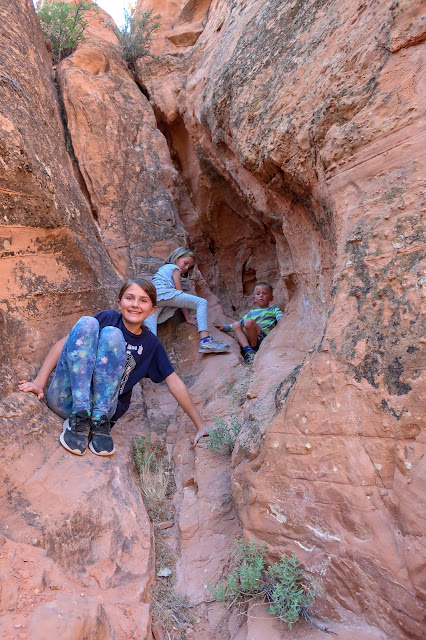 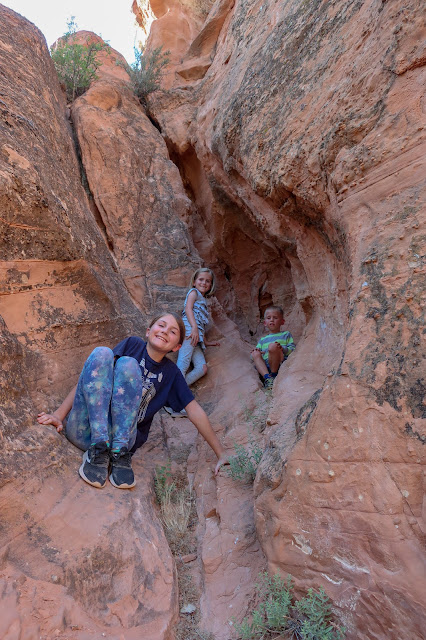 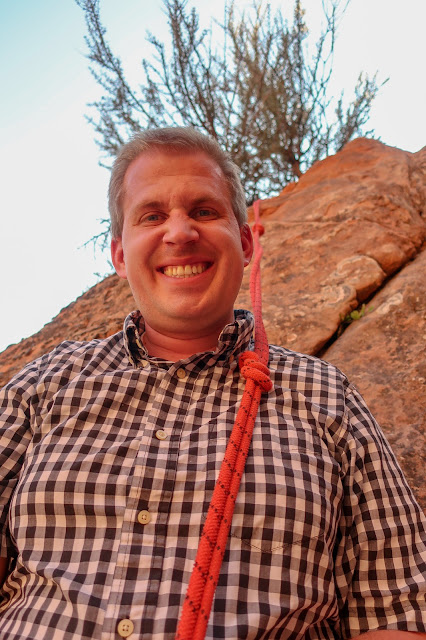 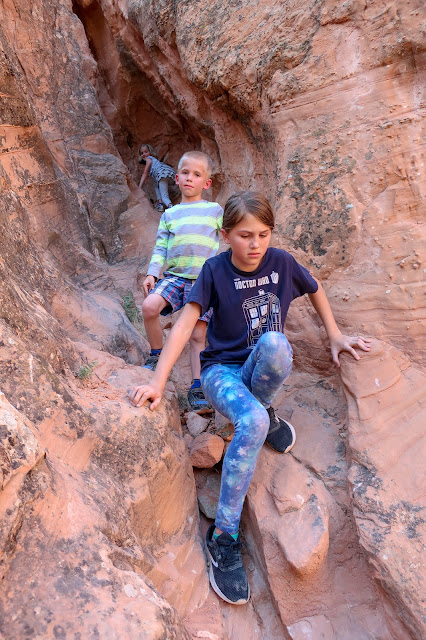 Andrew asked me if I'd climb the rope to see where it led. I was okay going up like two steps, where I could kind of hug the farther ledge, but then the rope kept pulling toward the cliff and I had to come back down. 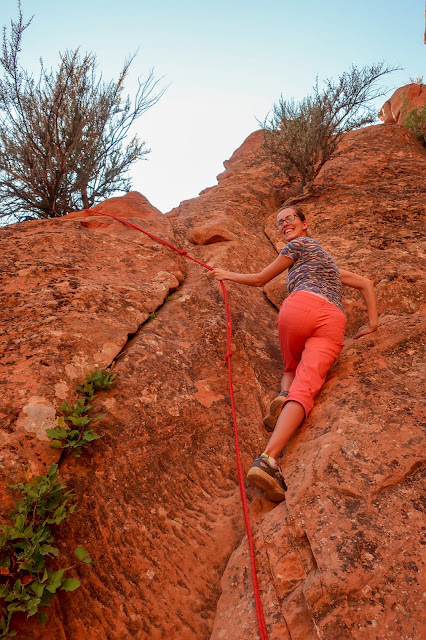 Once upon a time our friend Clark fell about 100 feet off a cliff, in front of his wife and friends, and I just...don't want to put anyone through that. You're welcome.

So, with our upward path effectively blocked, we made our way back down, stopping by the arch to grab some pictures of the girls (which are fine, but didn't turn out as well as that picture I took of Jacob and Carter): 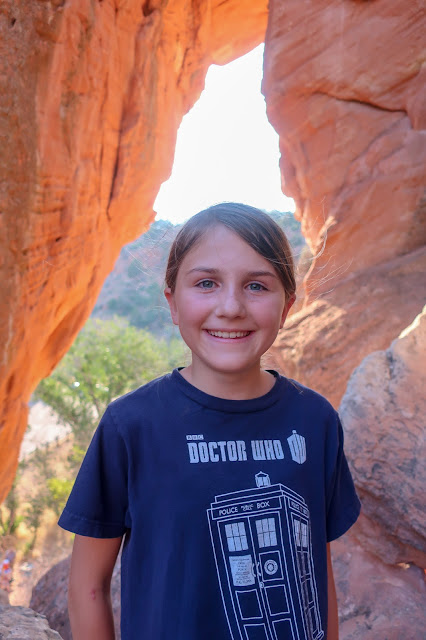 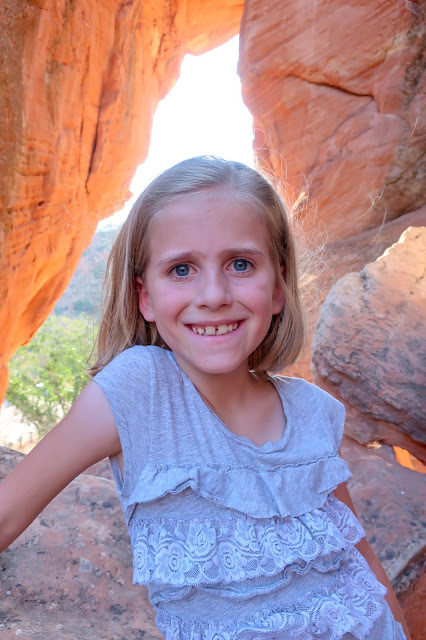 Also, Benjamin found this hole and immediately morphed into Gollum: 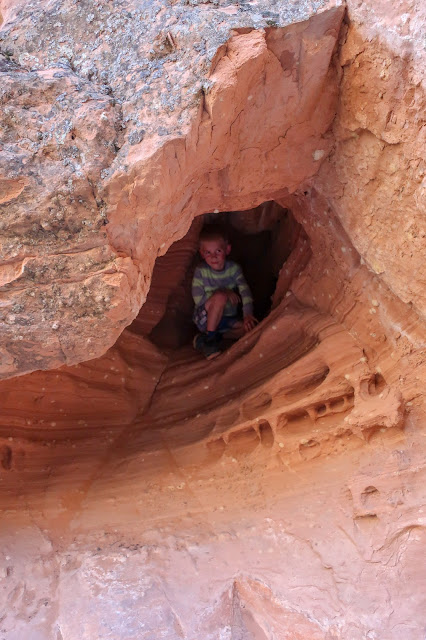 Once down we packed up from our dinner and said goodbye to Red Ledges again. Here's Alexander's serious face (he's still not 100% over whatever was causing his fever yesterday): 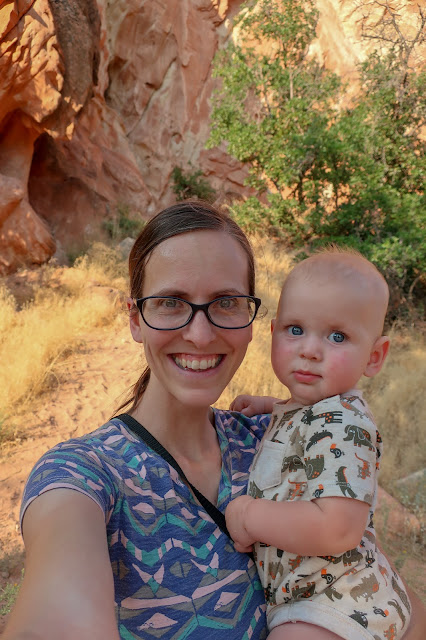 But Grandma hopped behind the camera and helped us get a smile: 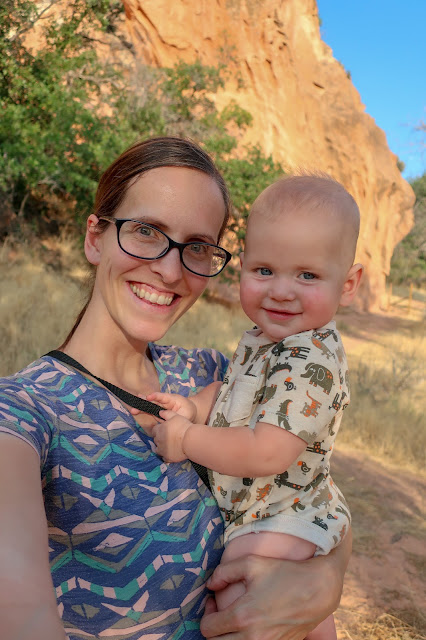 Speaking of Grandma, it took both of us combined to collapse Alexander's little camping...pod...thing. This thing folds up so easily once I remember how to do it. The problem is, I can never remember how to do it! I was pushing all sorts of buttons and things and none of them did anything. Finally Grandma lifted it up to look at it and I saw the correct button (hint: it's down by one of the feet) and it folded up nice and easy. I go through this every time I pull it out! 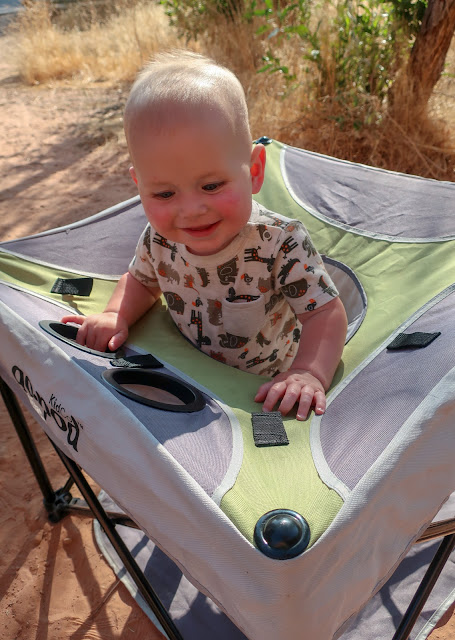 He'd better get used to this thing because he'll be using it a lot at Grover, I'm sure. Maybe we'll even remember how to fold it up when we're finished with it...
Posted by Nancy at 2:41 AM