Our ward's trunk-or-treat activity was a couple of nights ago. Miriam's been so confused about the name of this activity that now I'm confused. She keeps saying that we went treat-or-trunking (and I just typed that as the title of this post and then had to delete it when it didn't look right—it's trunk-or-treating). However you say it, it involves candy and costumes and the girls were excited about both those things.

Rachel was Hermione Granger, of course. She came off the bus one day, grinning from ear to ear, and announced that she and her BFF from the bus (Hailey) were both planning on being witches for Halloween. And I was like, "Uhhhh...you're not being a witch. You're being Hermi... Oh. Right; you're being a witch. Sweet—you guys are like twinners!" 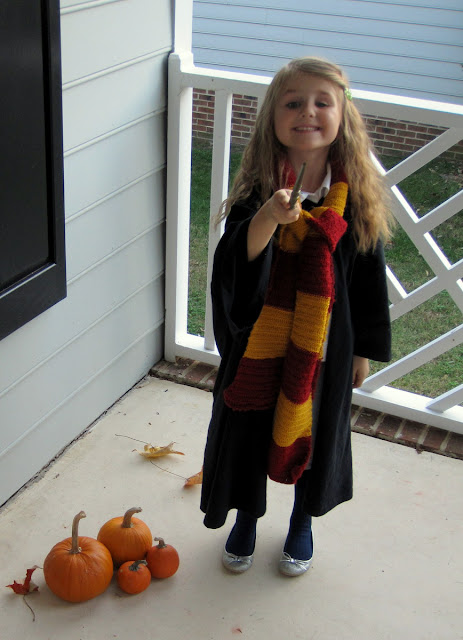 She was so excited to wear her whole costume all at once; we've been piecing it together for so long that she's never quite managed to get in the whole ensemble. I made the robe for her birthday (a black t-shirt cut up the front with a Hogwarts badge sewn on it), soon-to-be Auntie Shayla crocheted the scarf for her birthday, the wand was a gift from Auntie Katharine, the knee highs and blouse were hand-me-downs from my friend Lani's daughter, the skirt we picked up at a clothing exchange, and the shoes are from her friend Sydney (also hand-me-downs). 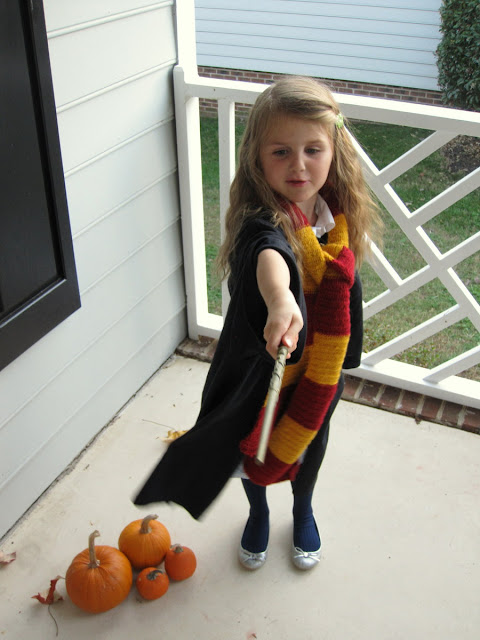 We braided her hair the night before so it would be crimpy for the party; that's really the finishing touch for this costume. Rachel has perfect Hermione hair. 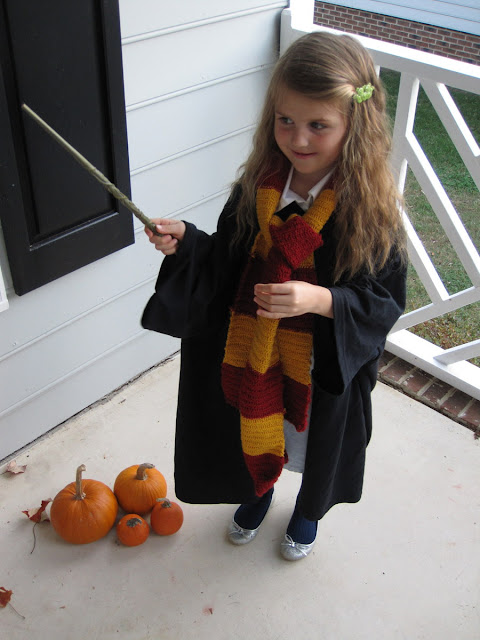 Miriam dressed up as Angelina Ballerina. She wore a leotard that Olivia and Sabrina passed down to her, a tutu of Rachel's (that she got for Christmas from Grandma a couple of years ago), some old tights, and some hand-me-down shoes. I crocheted her tail and ears for her from cast-off yarn we were gifted. 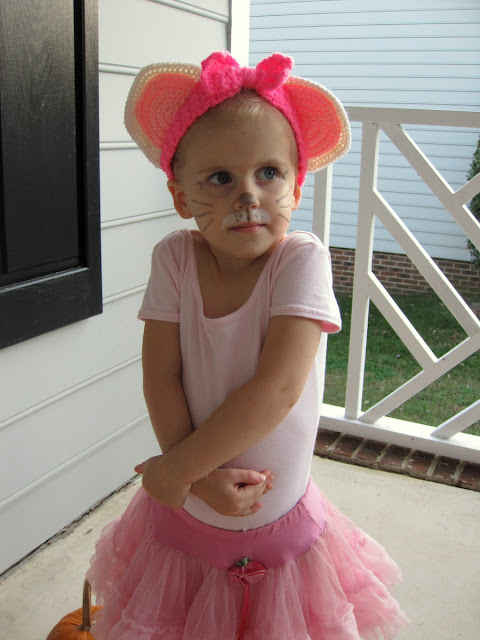 To put some pizazz into her costume, I painted her face. She was quite apprehensive about putting on makeup, which surprised me because she's my little fashionista, but in the end we were able to convince her to try it (with the option of washing it off if she didn't like it). She loved it.

She kept dashing off to the bathroom saying, "I just want to look at my face again!" 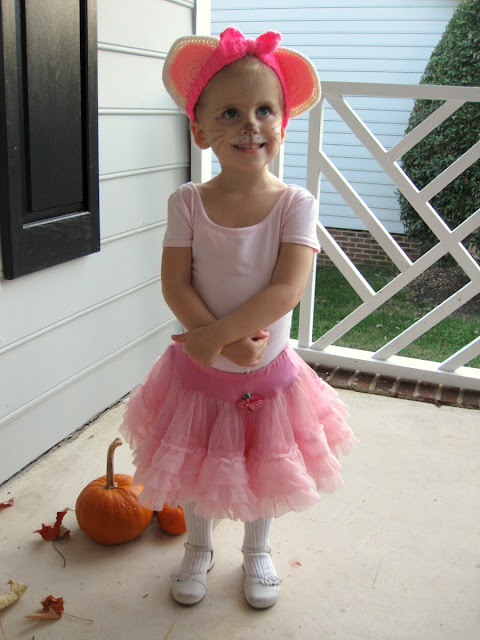 The face paints are from a book my mom got for me years ago—like from when we lived in Canada (so easily a decade ago—it's the 1999 edition). I hadn't really used it much (or at all) because I'm not actually a fan of makeup—it freaks me out to feel it on my face (like it freaks me out to see colour on my nails; I can't wear fingernail polish (for long)) but held onto it for some reason. Now that my children know it exists I have a hunch it will get a lot more use. 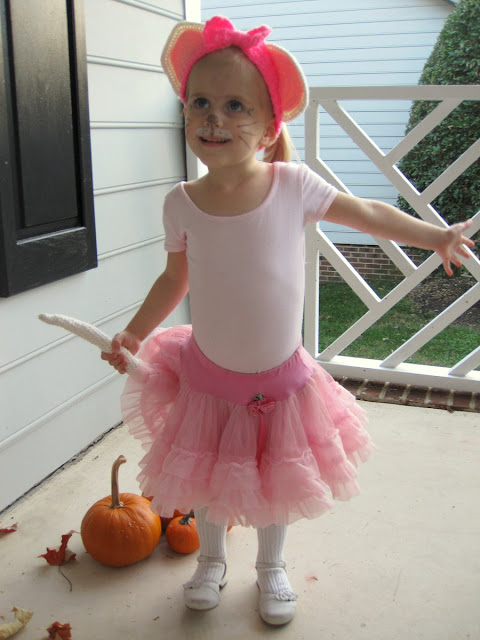 Here are my sweet girls together: 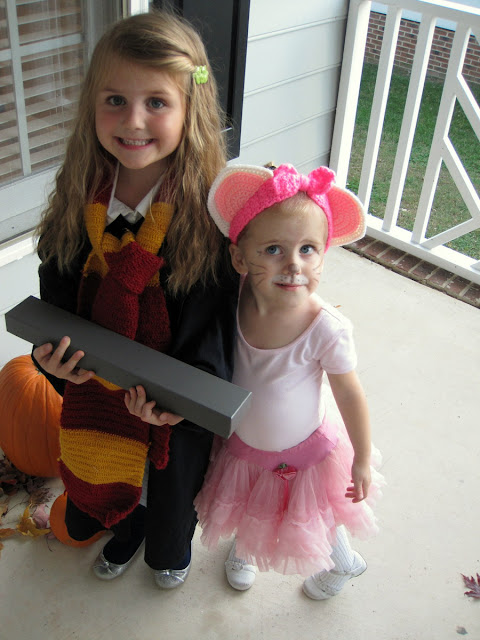 And here's my sweet little boy: 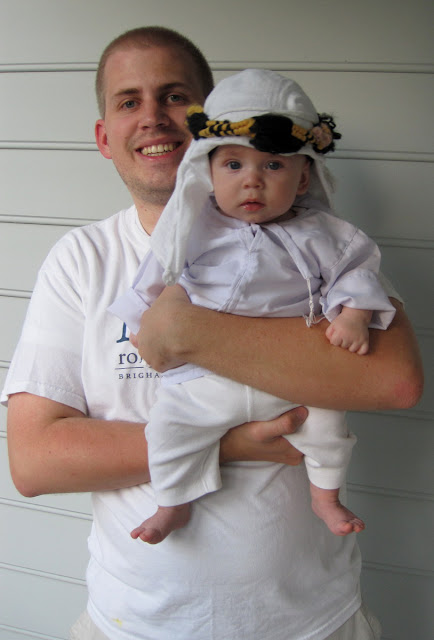 We picked up his little galabia/thawb at the Khan when I was expecting Miriam. We thought it would be fun to bless a baby boy in it. But then Miriam was a girl, so she wore the dress that I wore and that Rachel wore. When we blessed Benjamin he was hopelessly too small to wear it. And so we broke it out for Halloween.

His headdress...I think we got in Egypt as well. It was a super cheap-o tourist one and we lost the actual keffiyeh part so he actually has a birds-eye cloth diaper in lieu of that. He's so adorable though that it doesn't matter—he could've had a dirty diaper on his head and his eyes still would have melted the hearts of any living creature in a hundred-foot radius. 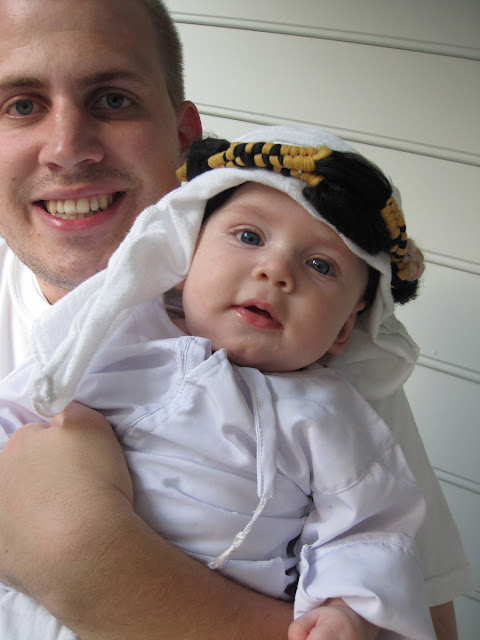 There were prizes for the best trunk. We decided to go with an Egyptian theme and the girls and I worked on our display for quite a while. Andrew picked up a big box at a hardware store and we made a pyramid out of that. We also made two little proto-type pyramids that the girls decorated and decided we should put one on the top to look like the outer casing of the pyramids, specifically that of the pyramid of Khafre (since it is still peaked with its casing). 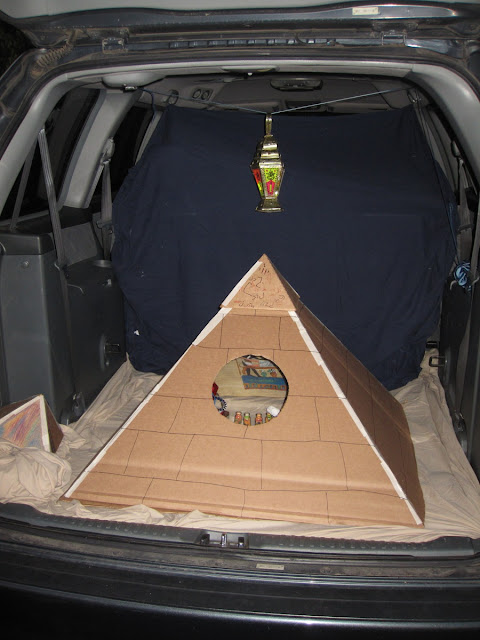 Both girls decorated a "casing" pyramid and then they battled over whose should decorate the top of the pyramid. In the end Miriam cared less about cardboard pyramids and more about getting to the party so Rachel won. Besides, Rachel decorated hers with hieroglyphics while Miriam's was simply rainbow-coloured so Rachel's fit our theme better. Now that Rachel's literacy has been increasing in English her interest in Arabic has been rekindled—you might see the word "camel" written in Arabic on her pyramid. We have Arabic fridge magnets and she'll sometimes ask Andrew to spell words so that she can copy them down (though connecting the letters is tricky since our fridge magnets are obviously the stand-alone version of the letters).

We worked just as hard on the inside of our pyramid—we made a mummy to go inside! 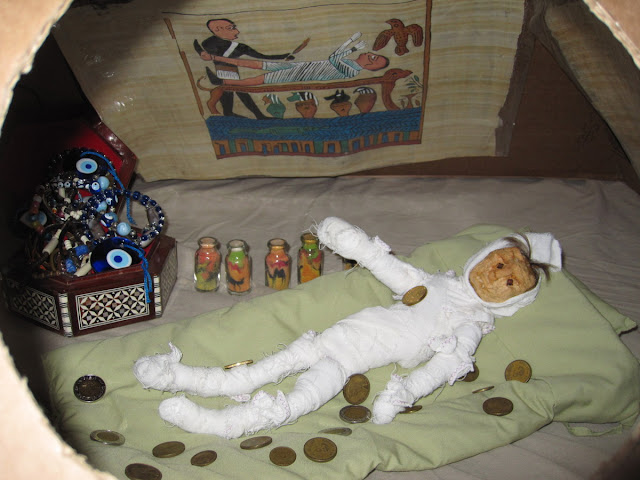 Rachel's been begging me to teach her how to sew so I mustered up every ounce of patience I have and we sat down and sewed together. We used old tights stuffed with old pillow. I held the fabric for her and she drew the needle up and down. I was completely frazzled by the time we were finished and then, before we'd attached the limbs to the body, we lost one of the legs!

No one started looking so I urged them again.

"It's alright, Mom," Rachel sighed lazily from the couch where she sat flipping through a magazine. "We can just make another one."

I told her that while that was possible she should still care enough to look for it. We did eventually find it (and it was hidden in such a way that makes me think that Miriam was playing with it and stuck it there and forgot about it) and while it took us a while to find it I think it took less time (and patience) than sewing a new one would have.

Once we had all the limbs we sewed them onto the body. After we'd done that we took an old, old burp cloth (that my friend Lydia gave to us when we had Miriam (that had been through her children)) and ripped it into strips and then wrapped it around our mummy.

The head was the girls' favourite part though. We carved a face in an apple and then set it in the oven to shrivel up. We pressed whole cloves in for the eyes and glued a couple of grains of rice in for teeth. Later I gave Andrew a haircut and we reserved some of his hair to use for Mummy hair. The result was satisfyingly legit.

After lying the mummy in its tomb, we taped the papyrus version of the facsimiles found in the Pearl of Great Price (1, 2, and 3) that we found at Sobri's shop on Road 9 when we lived in Cairo. We also put a bunch of costume jewelry, some "canopic" jars, and some Egyptian coins in the tomb.

At the last minute we decided to grab our Ramadan lantern as well and I'm glad we did because otherwise it would've been too dark to see anything—we put a flashlight inside our pyramid but oddly enough the light stayed mostly inside our pyramid. Go figure. 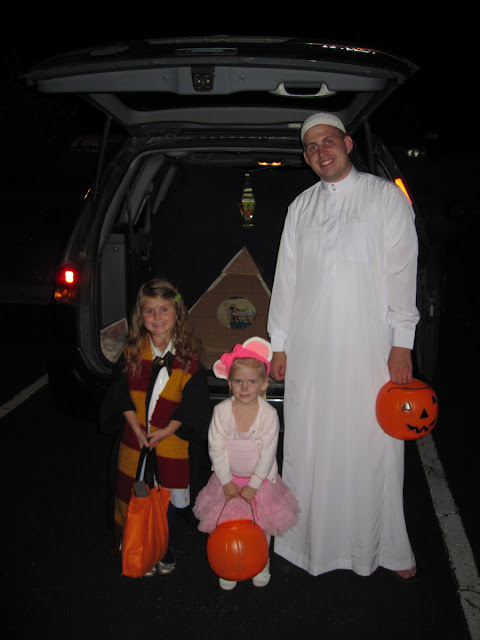 We ended up winning third prize! But more importantly we had a lot of fun building our display together. And look, I even convinced Andrew to dress up.

"What?" he asked when I told him he had to dress up...as part of our display, "Do you think I'm like my father who only dresses up once a decade? Do you think I don't like dressing up or something?"

"Uhhh...yes," I said because Andrew hates dressing up.

"But you'll do it because you love us?"

"Yes. And because Benjamin and I match."

So Andrew and Benjamin both dressed up in thawbs and keffiyehs. 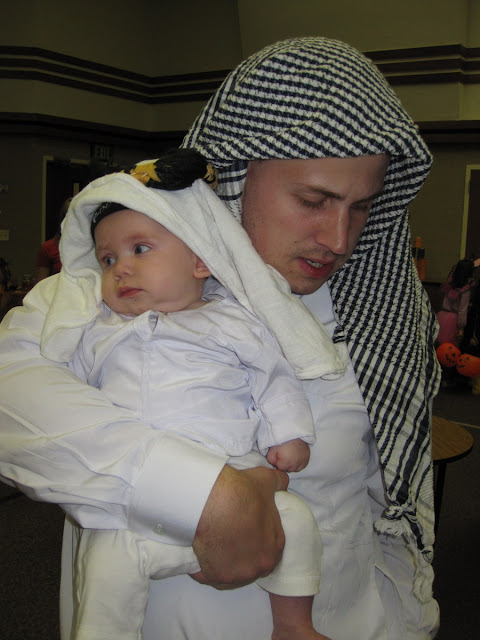 And they were darn cute together! 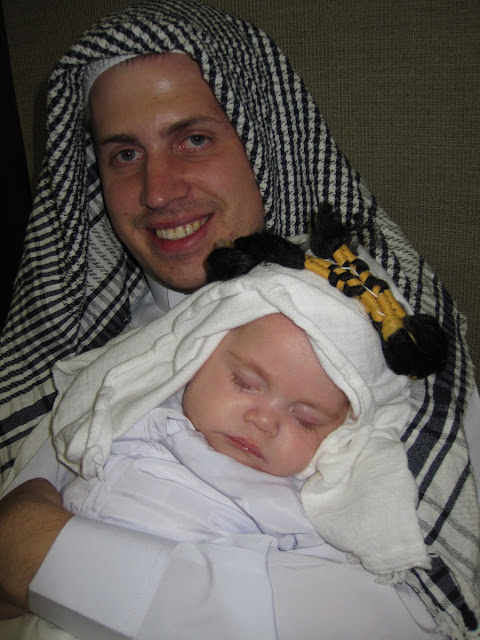 At some point in the evening (before I snapped these pictures obviously (and I didn't even notice that it was missing when I took these pictures!)) Andrew lost his agal (the rope that holds on the keffiyeh). He was a little upset when he discovered it because where are we going to find another agal in America? The girls and I went back into the church to hunt for it after the trunk-or-treat and we found it right away—so all's well that ends well.

I dressed up in my Egyptian garb, too, but there are no pictures of me...

I'm getting way ahead of myself though because before we did the trunk-or-treating there was a carnival of sorts inside the church. There were a lot of games but I only took pictures of a few.

Here's Rachel in the mad scientist's lab, trying to gather her courage and stick her hands in the mystery containers full of ogre eyeballs and monkey brains and things like that. 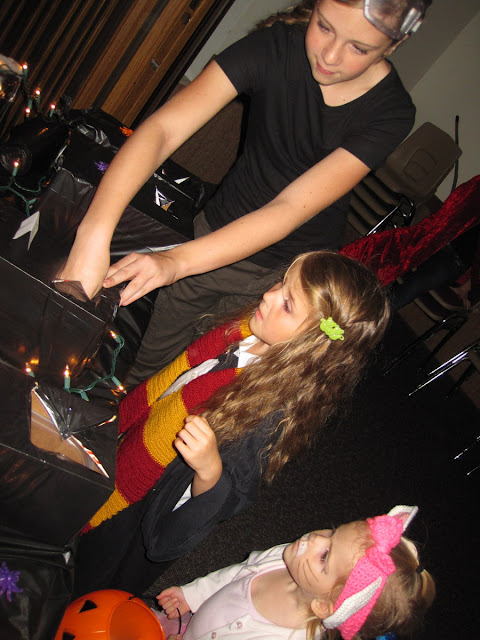 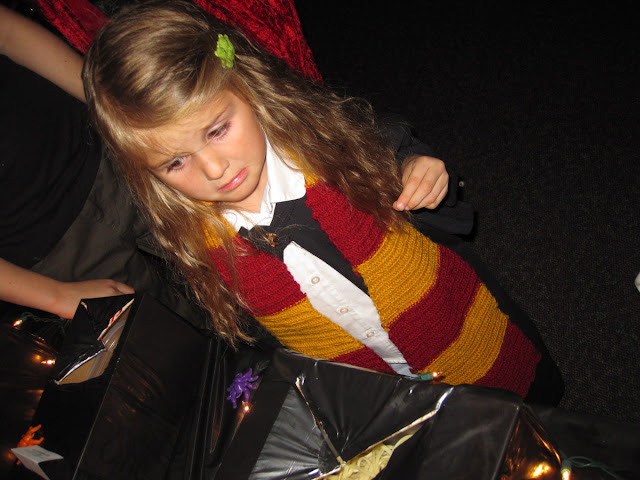 (I just now told her that the brains were cooked spaghetti and the eyeballs were peeled grapes; "WHAT?!" she said. "They tricked us?!" Well, yeah! Did she think they actually had those things in them?!)

And here are the girls at the donut-eating contest stand. This was hilarious to watch. 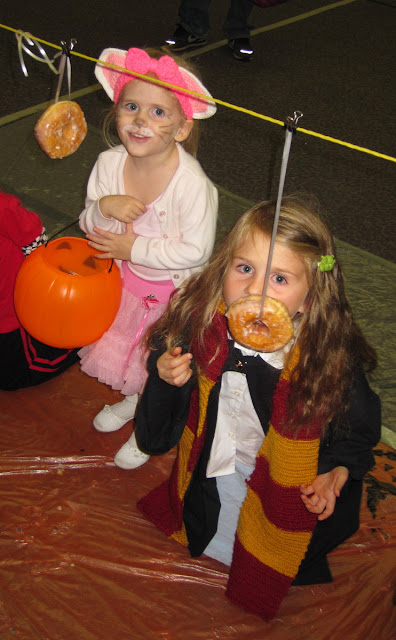 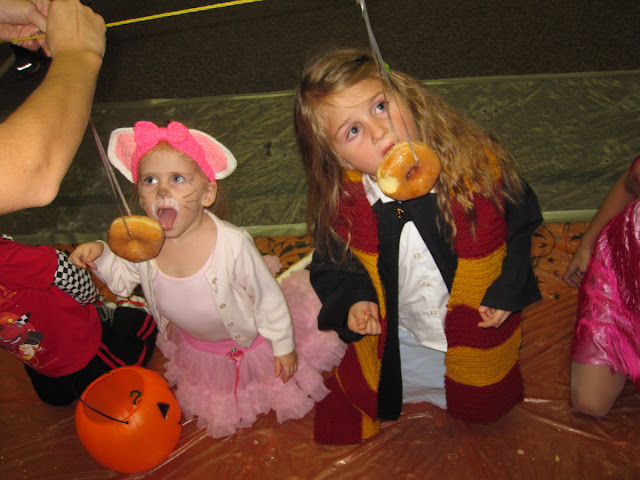 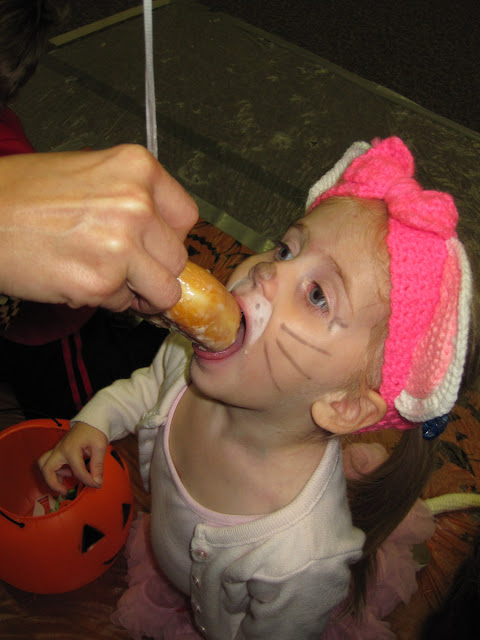 We had a great time and the girls got a ton of candy—much more than I expected. Now they're trying to consume all that candy before next week when they'll go out to get more.

'Tis the season to rot your teeth out, right?

(Their candy may start disappearing faster than they recall eating it because I had this brilliant idea to begin "assimilating" it into our stash of candy for Halloween trick-or-treaters).
Posted by Nancy at 1:18 PM