Alexander's cast was removed on Wednesday morning, which was quite the ordeal for him. Although it had been a month since we'd last been to the doctor's office he seemed to remember that his last visit had not been a fun visit—with the doctor examining his sore arm, the cold, scary x-ray table, followed by the trauma of casting! He was not happy to be back in that place.

Well, he was happy at first because they have some fun toys in the lobby, but when they called his name and we went back to our room he was as nervous as could be.

The poor nurse took his temperature—just sliding the thermometer across his forehead—and he wigged right out and turned around in my lap so he could wrap his arms around my neck while he howled.

"I'm going to go find someone to help you hold him down for me because I don't think he's going to cooperate for us..." she said, leaving the room.

She came back with a second nurse who helped me hold him down while the first nurse picked up the cast saw and went to work. Alexander squirmed and cried enough to work up quite a sweat by the time the cast came off his arm (which didn't take long at all).

Then he sat and pouted on my lap until the doctor came in to examine his arm.

Alexander did not want the doctor to touch him, but the doctor concluded that he didn't seem to be in any pain (compared to how miserable he'd been when we brought him in to get his cast put on).

The doctor wanted to make sure he had a full range of motion in his hand, so he tempted him to use his hand by offering him a tongue depressor.

"Do you want this?" the doctor asked, holding it out for Alexander to take.

Alexander took it—with his left hand (not the hand the doctor had been hoping he'd use)—but to show that he was not friends with the doctor he immediately handed it to Zoë.


"How about this one?" the doctor asked, holding a new stick out a little farther to Alexander's right.

Alexander snatched it again and quickly handed it to Zoë.

"Let's try one more," the doctor said, holding another stick out very much to the right of Alexander, but again he reached across his body with his left hand, grabbed the stick, and thrust it in Zoë's general direction with a defiant snort.

He was not taking presents from this man. Not today!

Next the doctor took Alexander's right hand and tried to make him squeeze his (the doctor's) finger.

Alexander was not having that, so I (trying to be helpful) asked Alexander if he would hold my finer (and he would), and that seemed to satisfy the doctor. He said to just call him if I noticed anything funny about his arm, but it seems to be just fine.

At lunch he seemed rather perplexed that I didn't put his arm in a plastic bag and then he refused to use his right hand for anything. After lunch we had a nice long shower together because (confession time) I only gave him one actual bath the entire month of February (though I did wash his hair a few more times than that and gave him a few sponge baths). His hand was pretty stinky and scaly (so much dead skin under that cast) but the shower did wonders for freshening him up! We're both excited to get back to our regular bathing routine.

I mean, obviously bathing was more difficult for him because he had a cast, but it was also more difficult for me because I usually shower with him (because I honestly cannot leave Zoë alone with him...still) so instead of showering whenever I wanted to I had to shower when he was asleep or when someone was home to watch him for me (big sisters are wonderful, wonderful things).

He's transitioned to mostly walking now, spurred on—we think—by breaking his arm, since he was not at all motivated to walk before this whole broken arm ordeal, so he isn't doing much crawling these days. But when he did crawl, he was still crawling on the knuckles of his right hand—like a little gorilla arm—and the palm of his left hand, still hobbling along. He's since realized he can crawl normally again (but, like I said, is walking most of the time these days).

He will still sometimes hold up his right arm when you ask him, "Where's your broken arm?"

It was rather funny at first because he'd act a little surprised when he'd grab his used-to-be broken arm and find no cast there. He'd frantically grab higher and higher up on his arm, while his eyes got wider and wider, and then he'd lift his arm into the air and wiggle his wrist a bit (just because he could).

He's very quickly gone back to being right-hand dominant, using his fork and/or crayons in his right hand again. I found this a little surprising. I thought he'd keep using his left hand for a while.

He no longer wakes up at night screaming, "Ow! Ow! Ow!" That doesn't mean he's stopped waking up at night. It just means he no longer screams "Ow!" when he wakes up.

The screaming was a little worrisome at first—we gave him tylenol the first few nights because he was so upset about his arm and was clearly trying to tell us that it hurts. But he never complained about it during the day so I wasn't too worried about it. After seeing what his skin was like under the cast, Andrew has determined that he was itchy rather than in actual pain.

Here's what his hand looked like shortly after we got home: 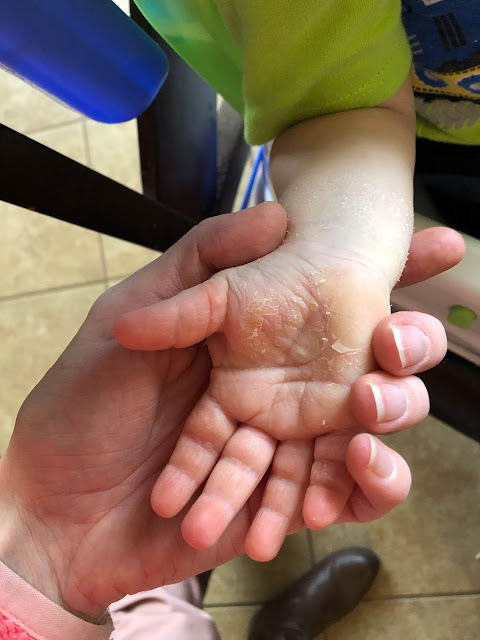 Here he is trying to tell me that he needs a bag to cover his hand: 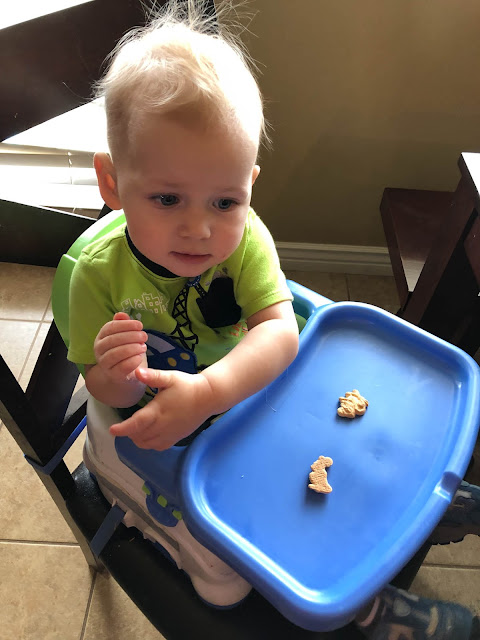 And this is basically how he ate his lunch, holding his right arm out like it was useless (disclaimer: I did give him more than two animal crackers for lunch): 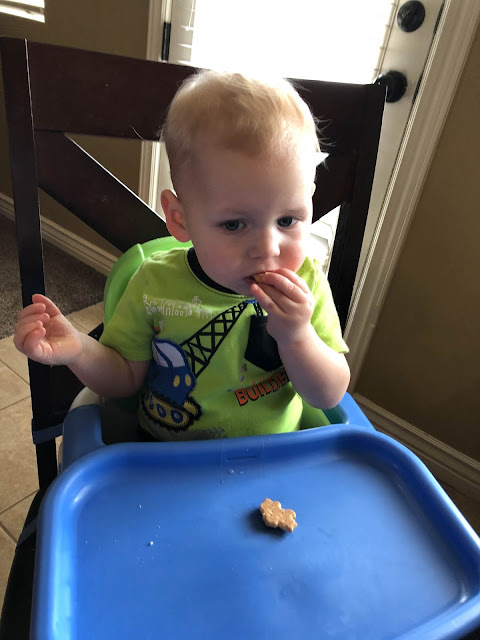 They sent us home with the cast, so if anyone wants to see how small it was or smell how stinky it was (honestly, not very—like a faint nacho cheese) they are more than welcome to do so. I don't know how long we'll keep it. The nurses suggested keeping it for his baby book, but I'm not sure they know how books work...
Posted by Nancy at 2:55 AM