We celebrated Grandpa Frank's 90th birthday on February 23 (though he was still three days shy of 90 then) and I finally got around to cobbling together a family picture where everyone is more or less looking at the camera with a somewhat normal face on: 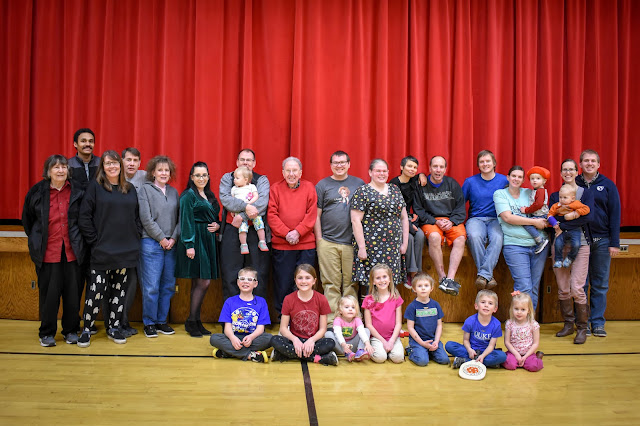 Andrew's family is picture-averse, as a general rule. My family could stand around taking pictures for hours. I mean, sure, half of us might be gritting our teeth, moaning, "Take the picture already," behind our grins, but we will stand there until the photographer thinks they have captured the shot they were going for.

Andrew's family does not do this. Andrew's family grimaces at the camera or will duck out of the frame or hold something in front of their face or pull a goofy face.

So you can imagine the reaction everyone had when Grandpa Frank asked for a picture. But how can you say no to this face: 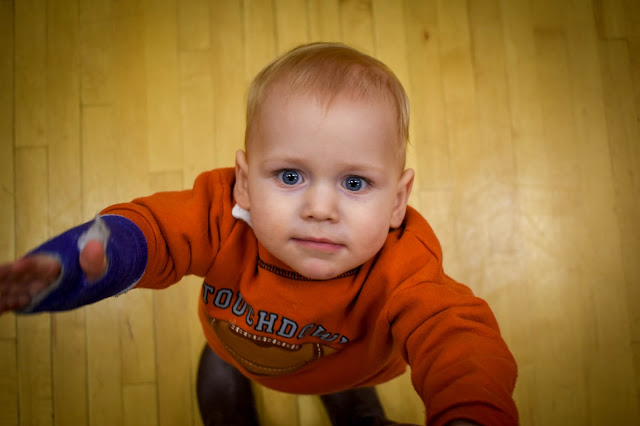 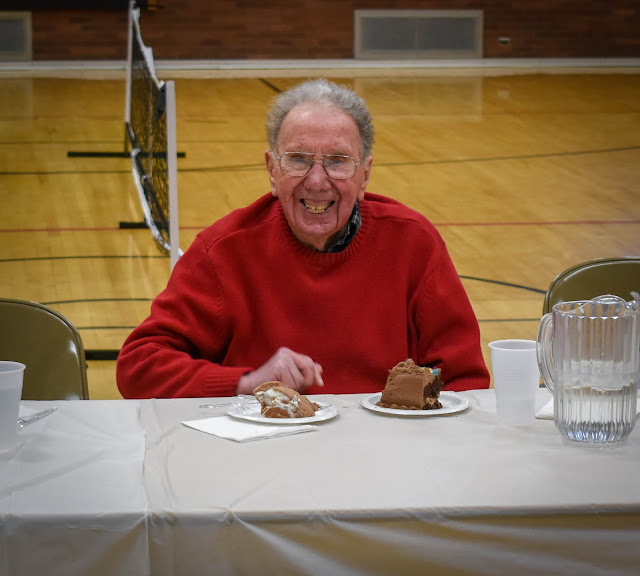 So we gathered everyone for a picture—26 strong (with a handful of family members missing). 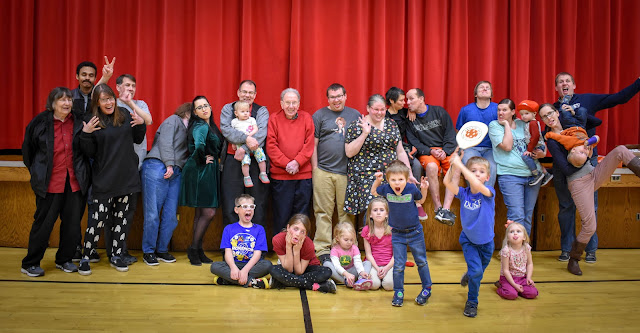 He seemed genuinely happy when he looked at these pictures on the tiny screen on the back of our camera. "Would you look at all those people?!" he crooned proudly. And, really, it's quite a feat that they're all there because of him—the only (and I imagine often lonely) child of immigrant parents, now surrounded by a big, crazy family. Pretty cool.

The kids were more than happy when we told them they were free to play: 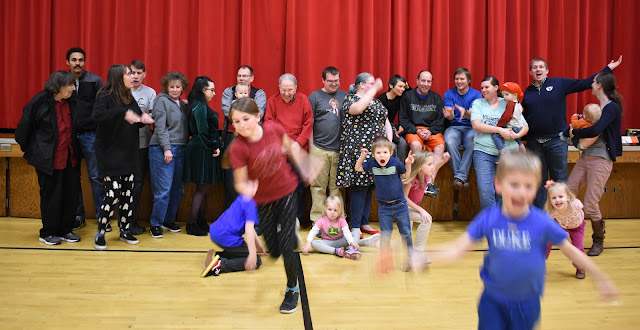 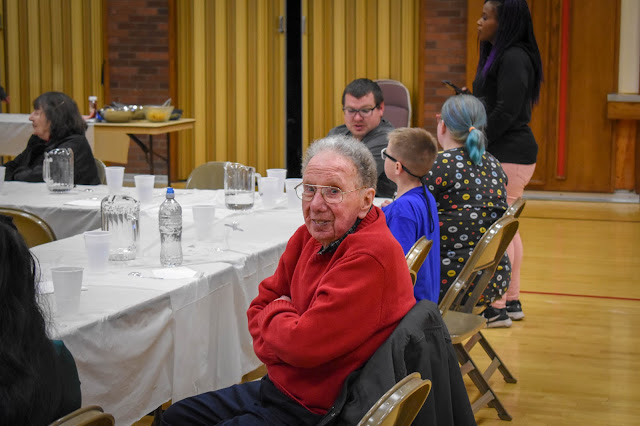 Here's Grandpa Frank being presented with his 90th birthday cake (that's a whole lot of cake over the years): 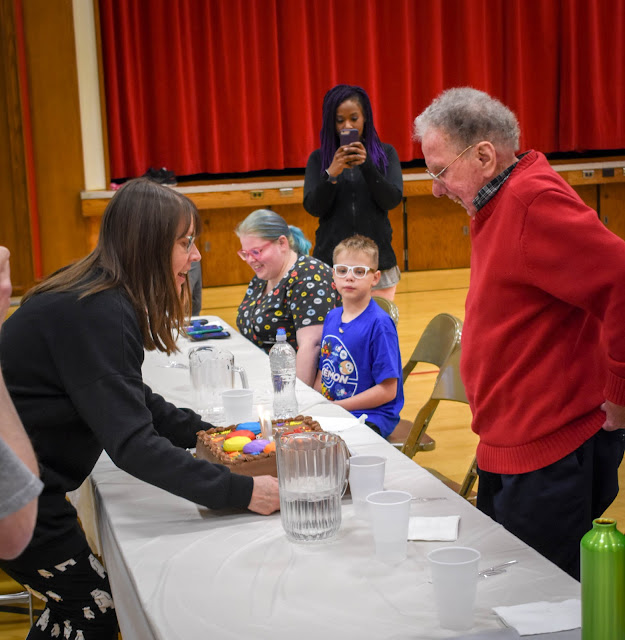 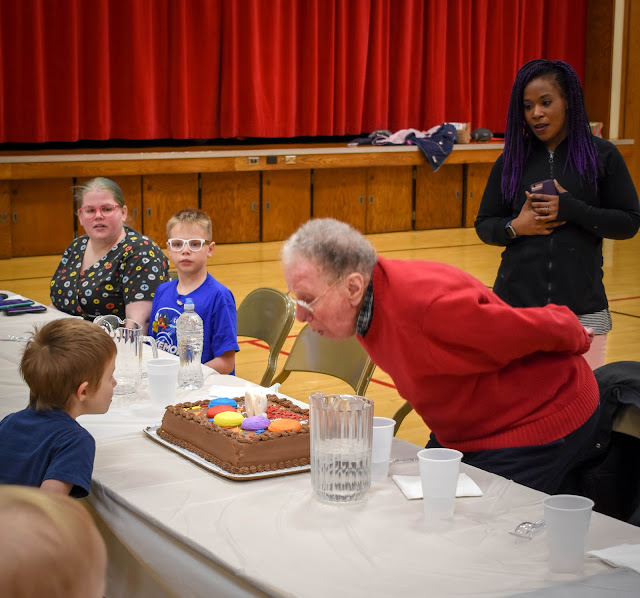 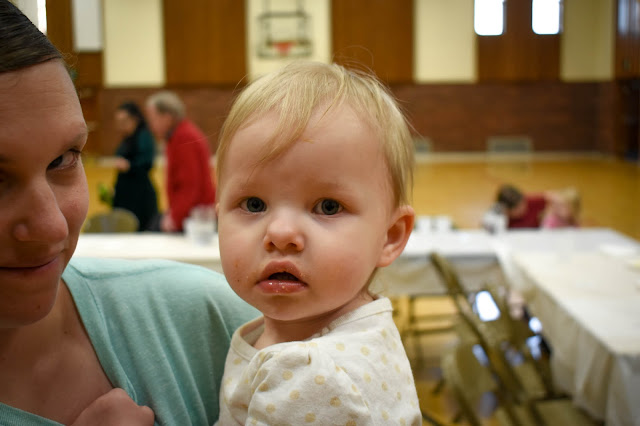 Emily's family drove down from Idaho for the party and poor Arwyn, who is a little prone to carsickness, got sick on the way down (again). There's nothing quite like making a road trip with a pukey baby!

Here's Rachel with the three-year-olds, Zoë and Maren: 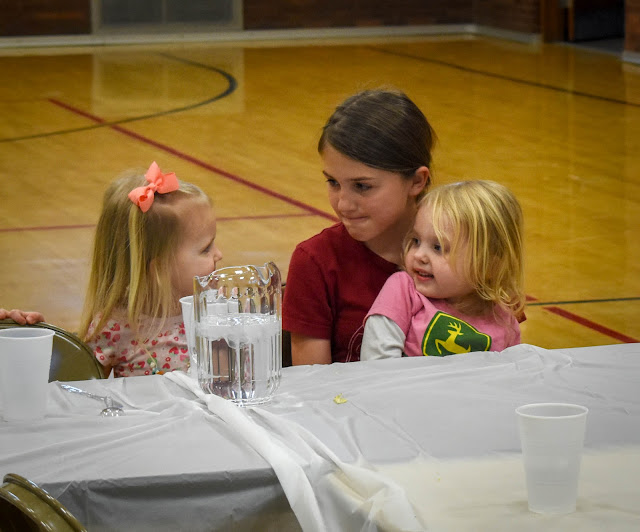 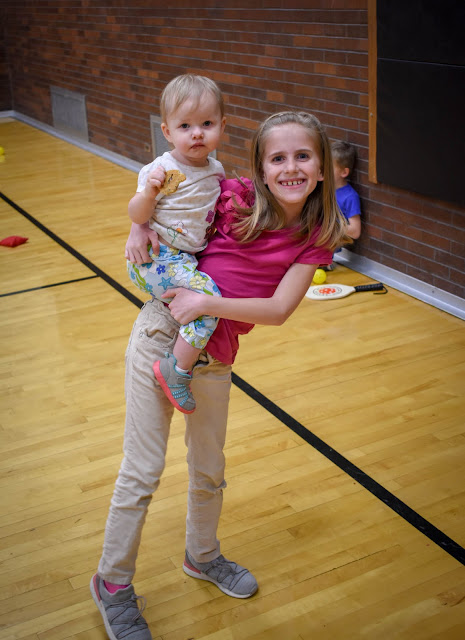 Here's Grandpa Frank hoping for some company during dessert: 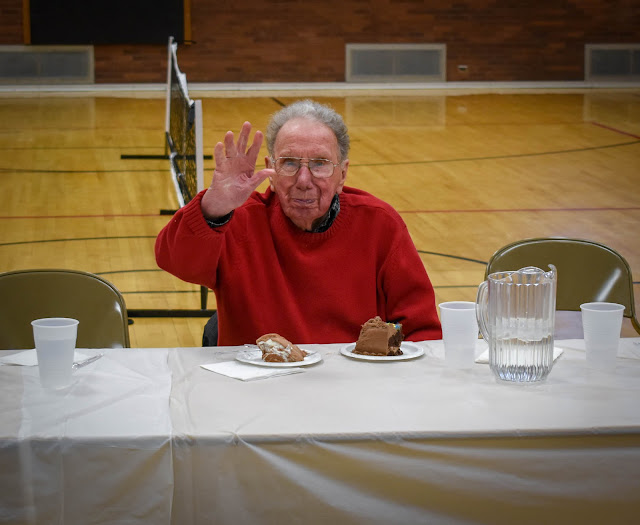 Here are the little kids enjoying their dessert: 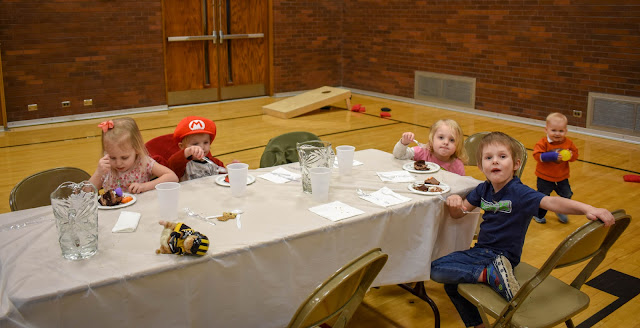 Here are some of the bigger kids enjoying theirs: 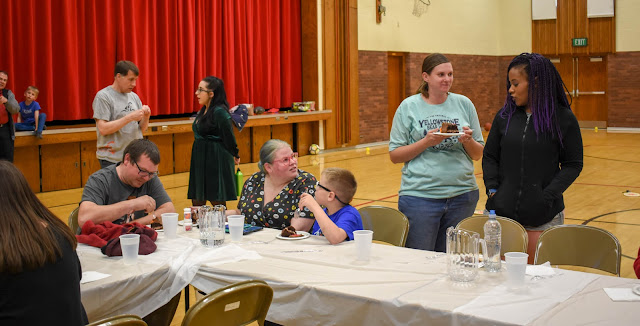 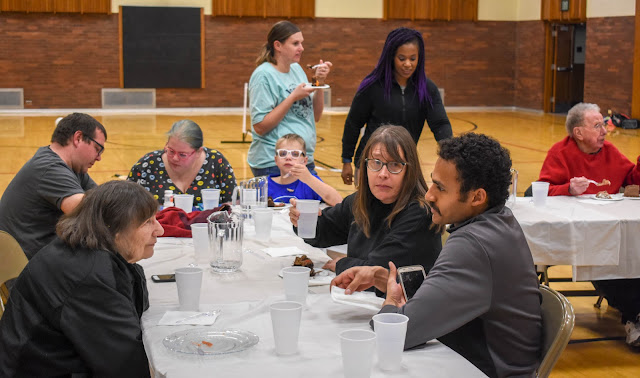 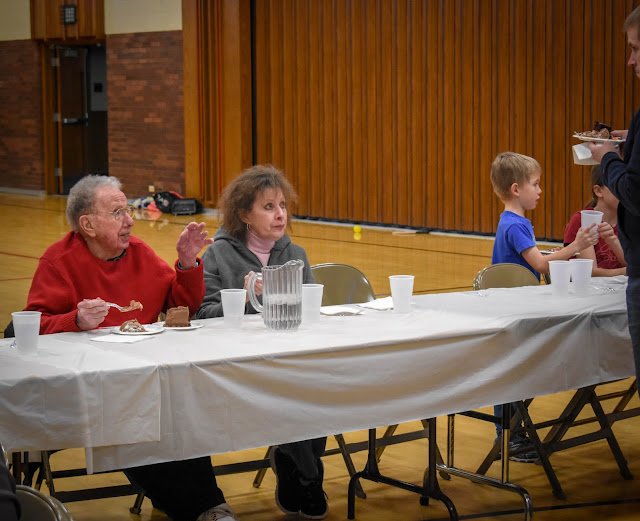 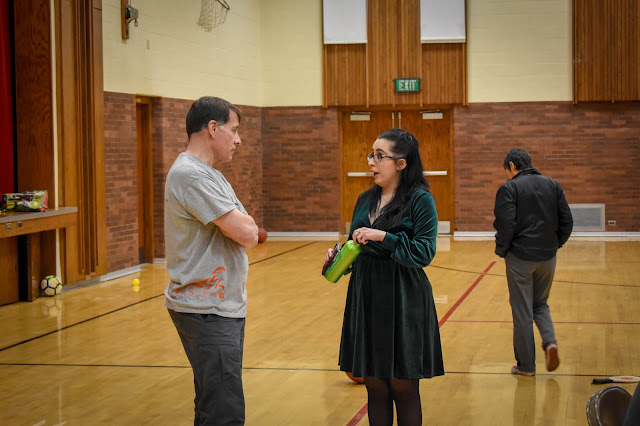 Here's Grandpa with the littlest ones: 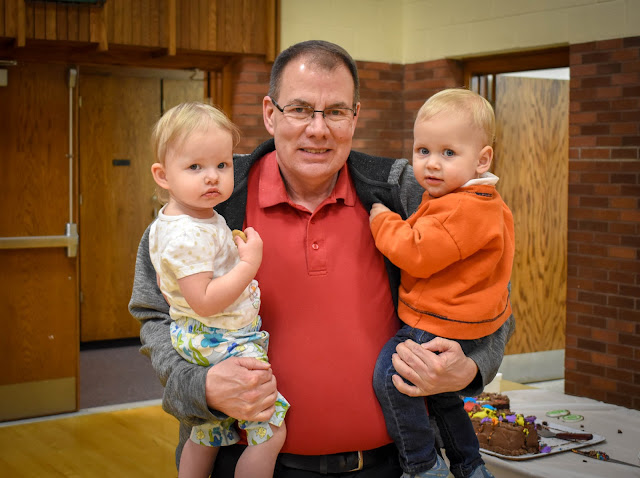 Alexander could not let Arwyn take over his grandpa. Every time Grandpa picked up Arwyn Alexander would toddle over and demand that Grandpa hold him as well. He didn't seem to mind sharing Grandpa, but he certainly couldn't allow Arwyn to have Grandpa to herself.

Uncle Rod and Aunt Marie brought some fun games for everyone to play—pickle ball and corn hole (and an assortment of other balls). Here's Marie and Rachel playing on one side: 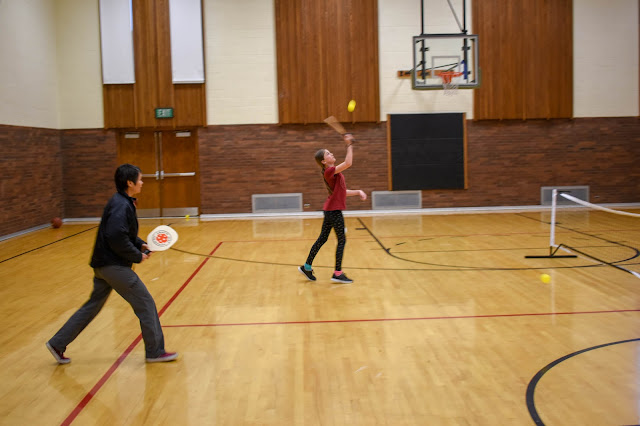 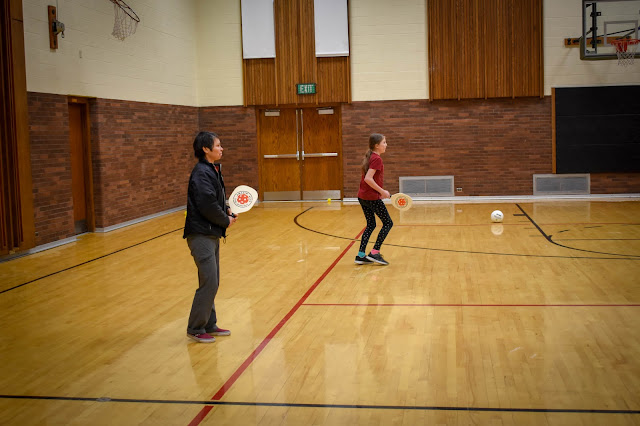 With Uncle Rod on the other side, assisted by Benjamin and Kayl: 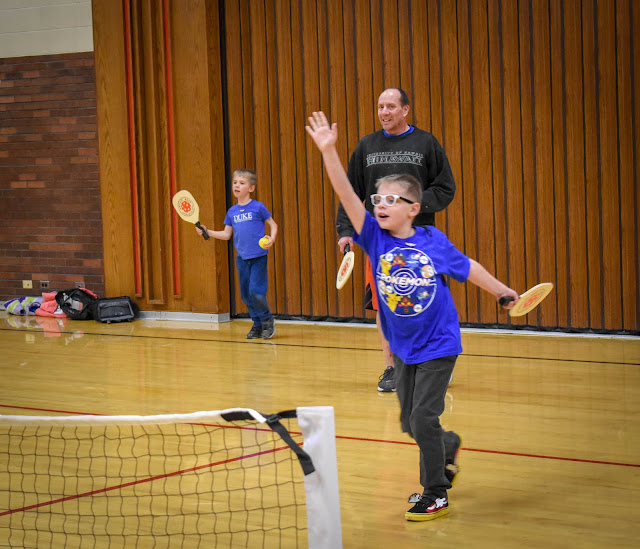 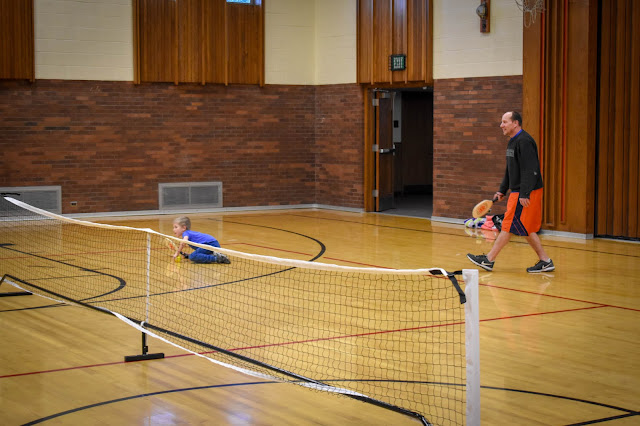 It was while they were playing pickle ball that we noticed that Rachel has grown as tall as Aunt Marie! 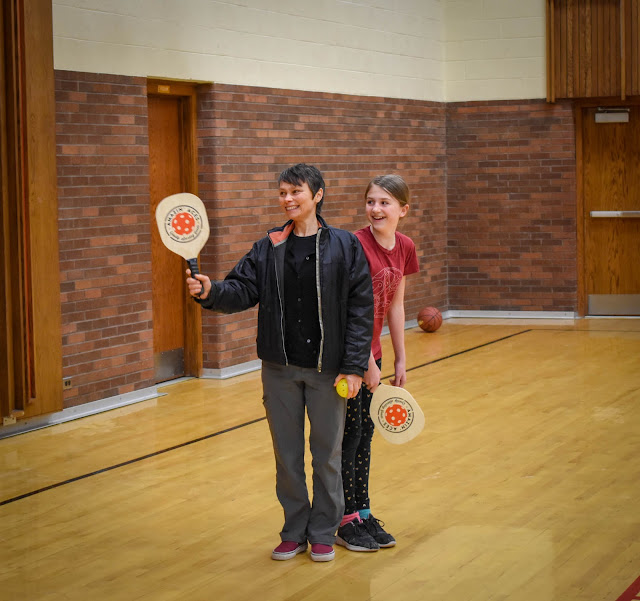 Kayl (and his parents) love Pokemon, so this is their little PokemonGo station—four devices going all at once: 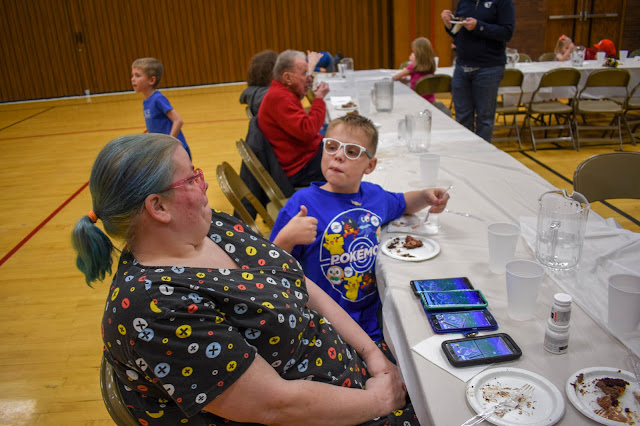 Here's little Gavin peeking out from under the stage curtain: 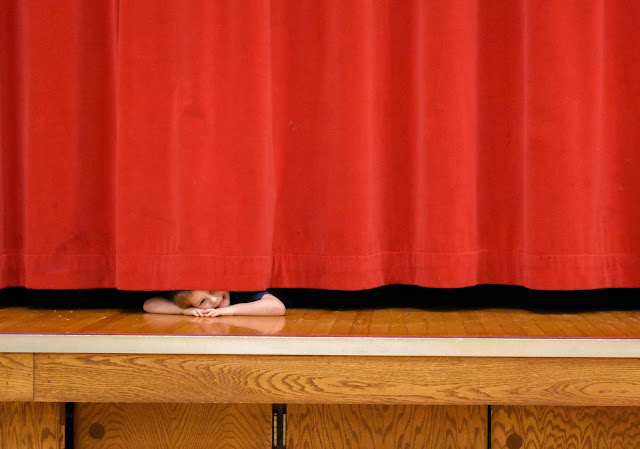 He is probably getting excited for his acting debut as "little boy" in the local (middle? high?) school production of Cinderella. We think that's great because Rachel is also preparing to perform in Cinderella (as "narrator 6")! What are the odds of that? 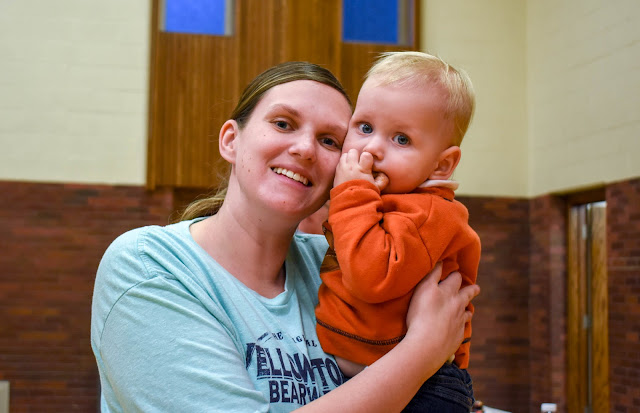 I wish someone would have gotten a picture of me with Arwyn. She is my little buddy and always wants me to hold her! As soon as we walked in the church, Arwyn came over to me and lifted her arms up to me. She let me carry her around for a good portion of the evening and would come to me for snuggles when she was sad. I don't know why she likes me so much, but...I'll take it!

And here's just a final shot of part of our crew relaxing after they thought picture-taking was over (but it wasn't—bwahahahaha): 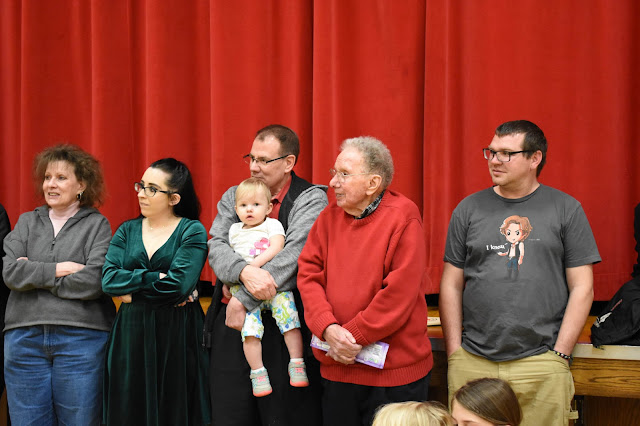 As Aunt Nicki would say, "A fun time was had by all!" and it was certainly nice to get together for a happy occasion!
Posted by Nancy at 12:45 AM