Today we celebrated Riley's birthday, though he won't actually turn four for a few more days. We don't go to his house often (in fact, I think the last time we went to his house was for his third birthday party) but the kids always have fun when we do because there are so many little people to pal around with.

I was pregnant with Benjamin at the same time that Cory's sister was expecting twins (if my memory is serving correctly) so when we all get together we have 5 rather rambunctious children—the 3 six-year-olds, Riley, and Zoë (plus Alexander and a motely collection of older cousins). It's pretty fun—so fun that Zoë even faced her fear of dogs so that she could play in the backyard with all the kids.

When we arrived Riley was already out in the backyard with the twins and his dog. Benjamin made a beeline for the backyard and Zoë trailed along behind him like she always does, but when she saw the dog she immediately backtracked and quickly closed the door behind her. There was no way she was going out there!

She sat forlornly for a few minutes, watching the children outside playing their little hearts out. Then she turned to me and said, "Mom, I think I'll go outside 'cuz you know what? Puppies don't bite people. They just run around and scare people!"

And with that she ran outside to join the passel of children in the backyard.

Abby (the dog) was having a blast playing fetch with some of the older cousins and wasn't paying the little kids any attention at all, so Zoë was pretty safe (Abby didn't even come up to sniff her).

We went through the typical birthday activities: pizza, presents, and cake. 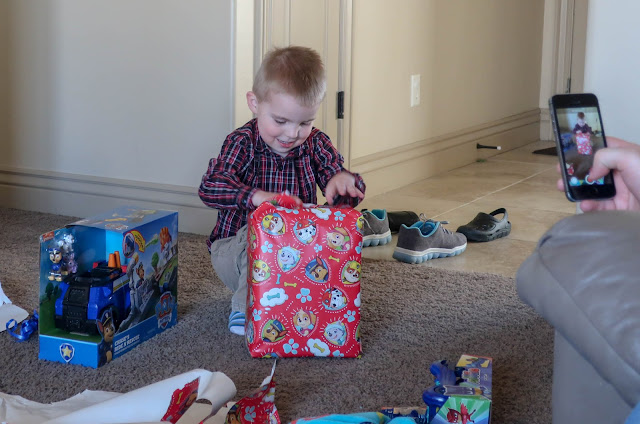 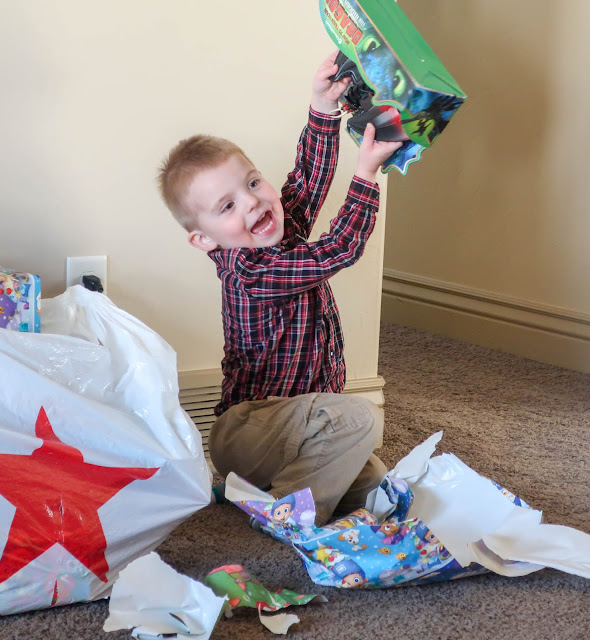 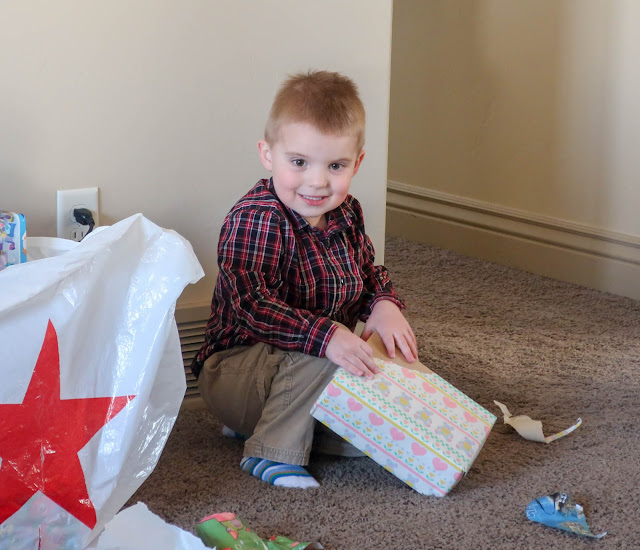 He peeled off a little piece of wrapping paper from this present and said, "I think it's a box." Then he tore off the rest of the paper and said in his raspy little voice, "IT IS A BOX!!!" 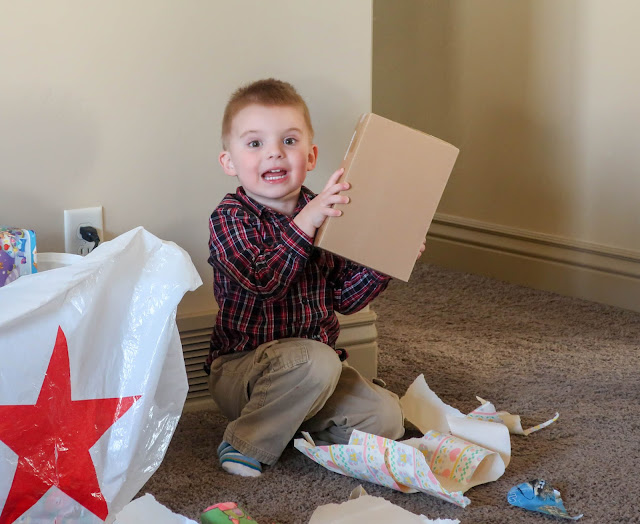 He was just about as excited about that as anything else he opened! But Zoë gave him some gentle encouragement from the sidelines. "Does it have anything in it?" she asked.

Riley rattled the box and squealed, "I think there's something inside it!"

Zoë half-way stood up (and then sat back down) several times, fighting the urge to get in there and rip the box open for him, while saying, "Do...you...need...any...help?"

In the end her manners won out.

Poor Miriam was crushed because she'd drawn a birthday card for Riley, but he didn't even really look at it and it got thrown away with all the wrapping paper—but she handled her emotions astoundingly well when we explained that Riley was...four...and her card had been thrown away by accident.

She really shouldn't feel too terribly about it because we accidentally threw out Cathy's glasses (that's Riley's other grandma). Too many hands gathered up that wrapping paper too fast, I guess (also, Cathy's son dug through the trash to find the glasses (which wasn't hard because the wrapping paper was all in its own bag)).

Here are a few pictures of Riley with his Paw Patrol cake: 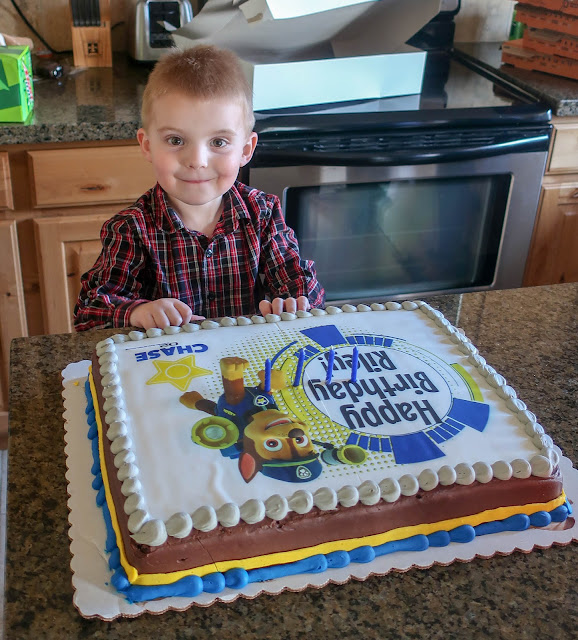 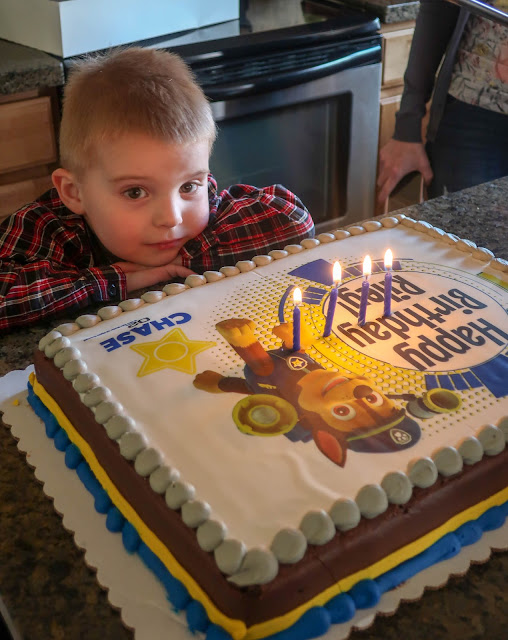 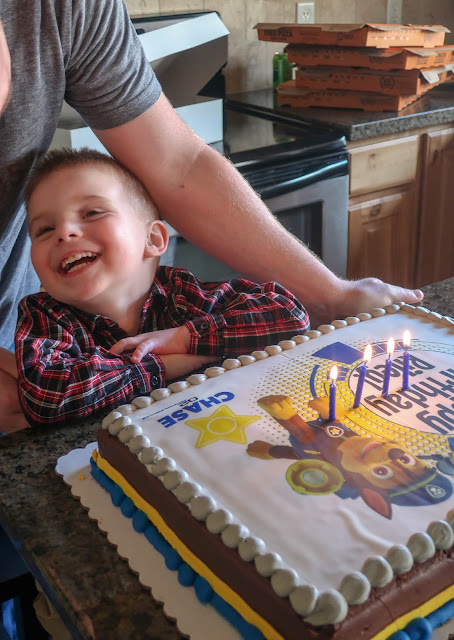 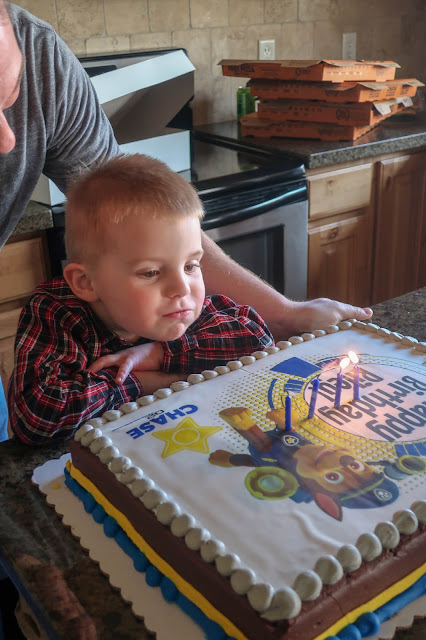 Riley's birthday starts a domino-effect in our little trio of cousins. He turns four in March, then Maren turns four in April, and next Zoë will turn four in May. And how can that be possible?

When they were three it seemed like they would be three forever and here they are...turning four.

Four will (fingers crossed) be easier than three-years-old, but it just sounds so...old.

My friend's little guy just had his second birthday and she posted a picture of her snuggling him the evening before his birthday with the caption, "It feels surreal to be holding my last one-year-old," and I realized that time is creeping up on me, too! Not for seven more months, but still!