Growing up, f-rt was considered such a vulgar word in my home that to this day I cannot hear it without cringing. Andrew's home was the very same way. So very naturally, the word still goes largely unused in our home (though, weirdly, many of our siblings use it with reckless abandon, which, I mean, like, to each their own, but...how?! How does it not grate your ears, guys?!).

Oddly enough, however, the phrase "artsy-fartsy" does not bother me in the slightest, so that would be the one use of the word f-rt that I would consider appropriate.

And that's just the kind of weekend we had—an artsy-fartsy one! It was a long weekend because the children didn't have school on Friday and BYU had Friday off for spring break day. It felt marvelous to get to take things slow Friday morning. Rachel went to the temple with some friends. We puttered around the house. And then we headed out to the Springville Museum of Art, which we've somehow never been to even though it's amazing! 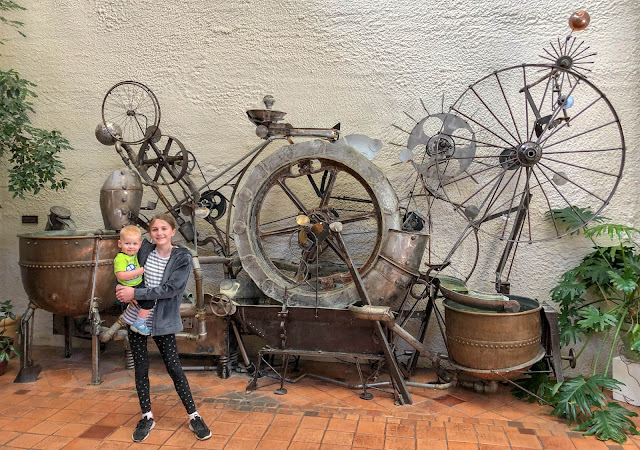 The building itself is on the National Register of Historic Places. It's not terribly old (1937) but is the "oldest museum in Utah for the visual fine arts," and is very architecturally interesting, "designed in the Spanish Colonial Revival style by architect Claud S. Ashworth." Then-apostle David O. McKay dedicated the building to be "a sanctuary of beauty and a temple of meditation" (thanks, Wikipedia). 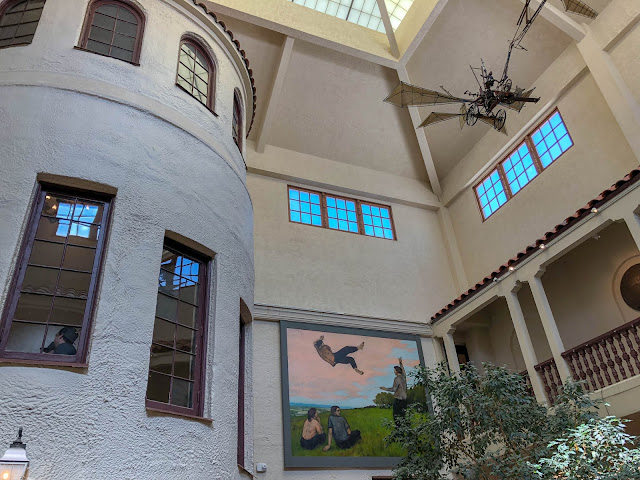 The exhibits were largely designed with children in mind—they had a train room with toys (and artwork of trains) where the younger three played for quite some time while Andrew took the older girls off to see other things: 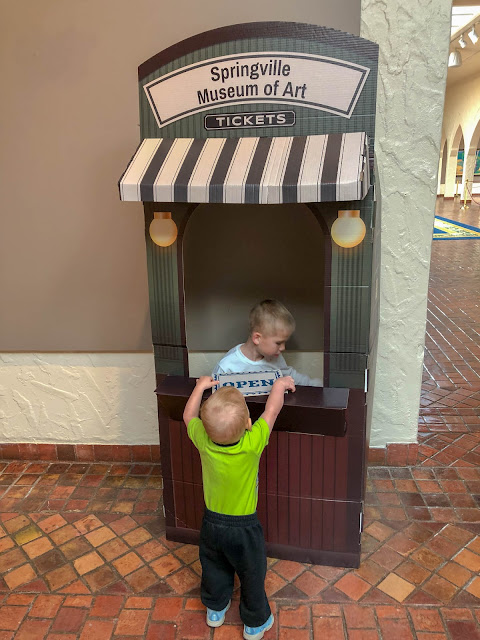 They had a drawing station where kids (or adults) could create their own comic book character, which Zoë and Benjamin loved. We talked a lot about the different styles artist use and how they're all valid ways of creating art—some artists use smooth strokes, other pieces had chunky streaks of paint. This artist incorporated geodes and other things into their painting: 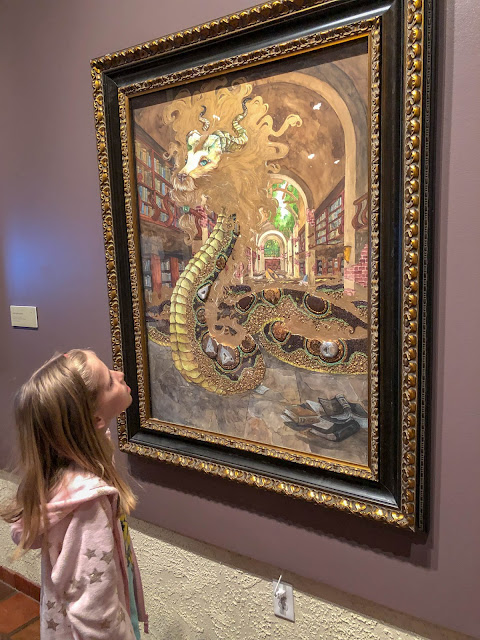 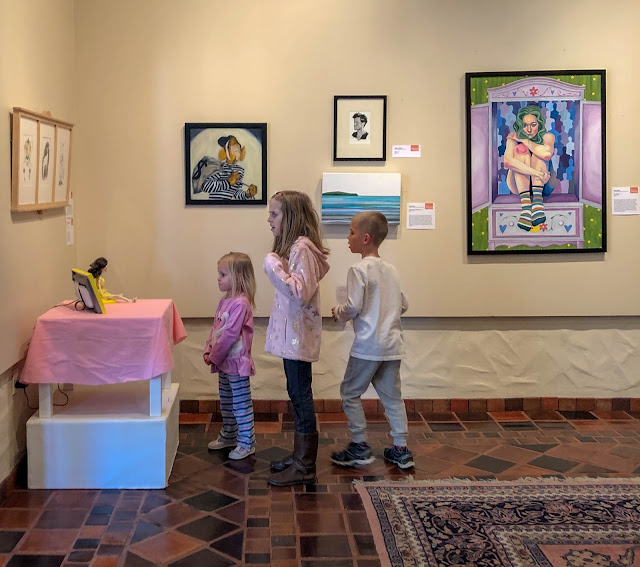 All of them, however, made us think new things, each of them helped us have new ideas and conversations and feelings. That's something we've talked about a lot in my writing class—that creating something that wasn't there before is magical and how witnessing someone's creativity is somewhat of a sacred experience. 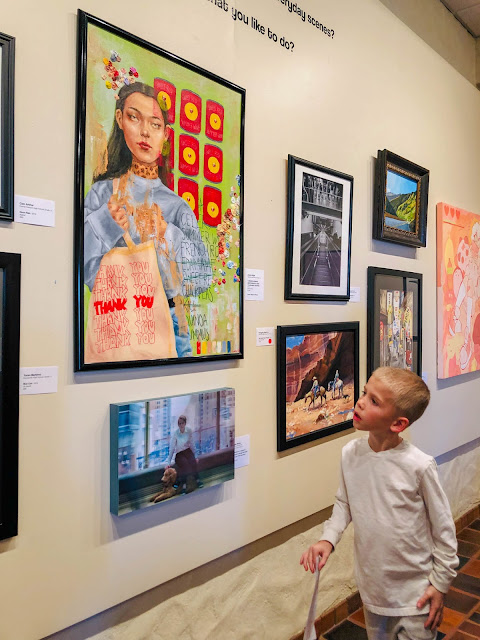 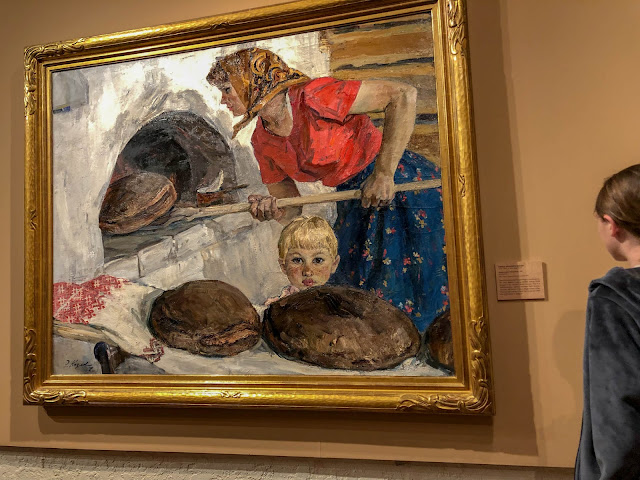 When we exhausted the upstairs galleries we headed into the basement to find the children's area that the woman at the front desk talked up so well that we could not leave without visiting.

They had some very colourful artwork down there, a table with play food, a reading nook, an easel and a still-life display, a big community chalkboard, and blocks. 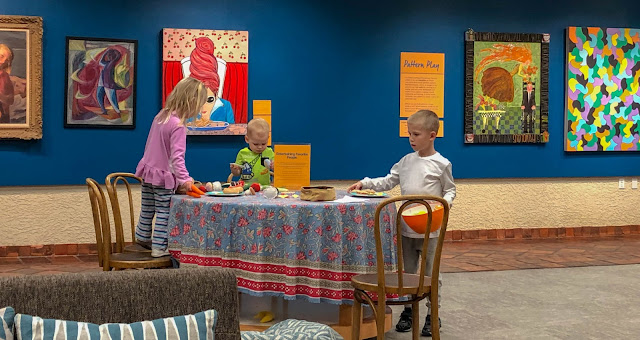 We had the room all to ourselves and had a wonderful time! Here are my boys drawing together at the easel: 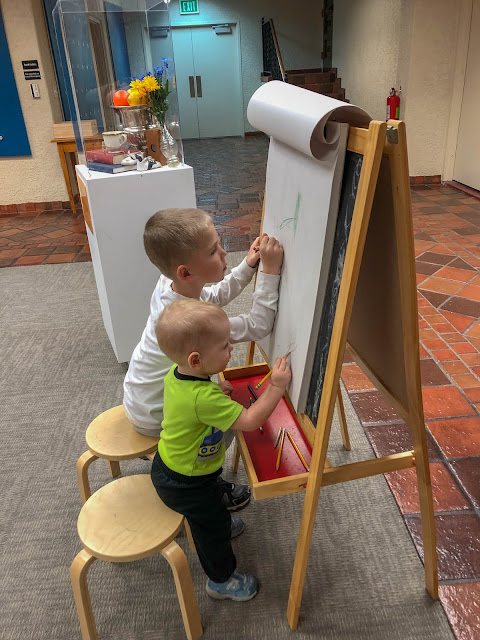 I thought it was cute when they synchronously stood up to work harder at their drawings: 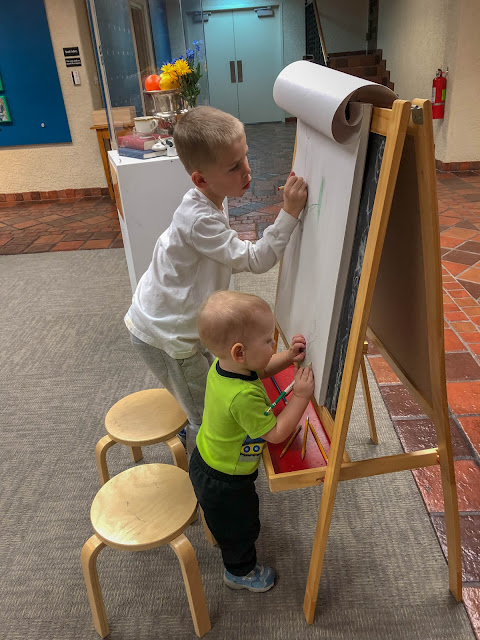 Here's Alexander flashing me his "What a Good Boy Am I?" smile: 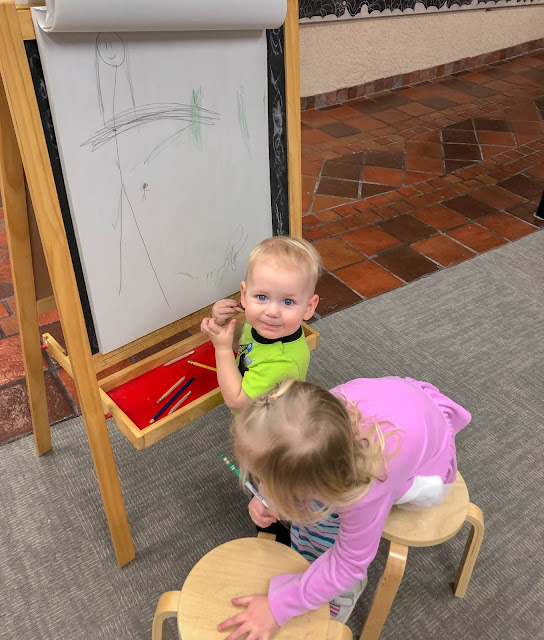 And here he is flashing that same smile again over at the blocks after putting another block on the tower I helped him build:

On Saturday attended the "SUPERcussion" children's concert at BYU with my mom. It was a fabulous program—in addition to regular percussion stuff (marimba numbers and so forth), they did a number with brooms, a number with boomwhackers, a number on barstools, and a number on garbage cans. The children were, for the most part, riveted.

The one number that lost their attention was a story telling segment, accompanied by foley. I think the kids would have enjoyed the sound effects had the story not been so dry. Had they chosen a more familiar story and selected children to come on stage to help make the sound effects, I think it would have been much better received. That was an activity they suggested in the paper program—attempting to tell The Three Little Pigs at home, using various items from around the house to make sound effects.

But other than that the concert was wonderful!

We popped into BYU's Museum of Art on our way back to the car, where I snapped this picture of Naanii and Benjamin enjoying Patrick Dougherty's exhibit Windswept: 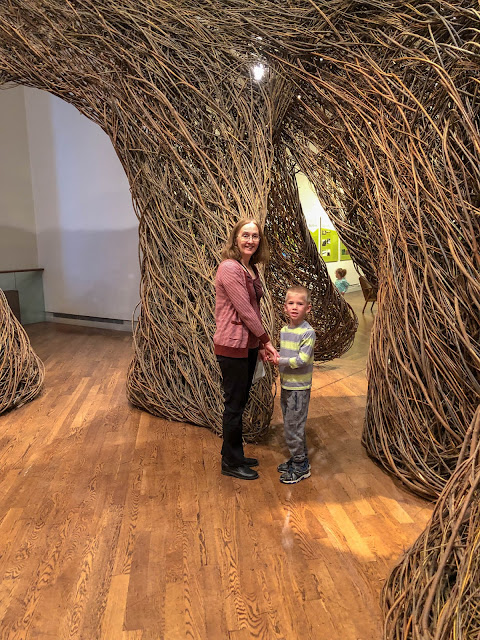 As luck would have it, Grandpa had been at home pruning fruit trees all morning on Saturday and while he managed to fit an impressive number of branches into the garbage can, there was still a rather big pile that did not fit, so the kids dragged a bunch of them into the backyard on Sunday afternoon to build a Dougherty-inspired teepee: 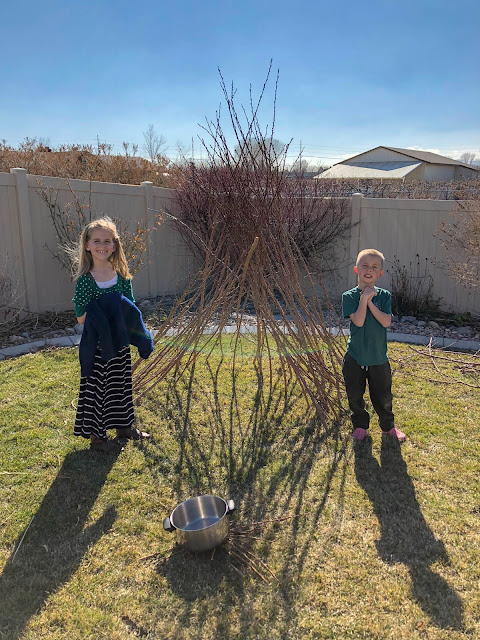 I should also mention that on Saturday afternoon we left the older girls at Naanii and Bumpa's house so they could paint pysanki with Auntie Josie. I will have to take a picture of the girls with their eggs because they turned out beautifully! I'm sure they took an amazing amount of patience to finish (both on the part of the girls and their intricate designs and on the part of Auntie Josie who was coaching them through the whole process—wax, fire, dye!).

Oh, and here's a little video of Alexander flashing his "good boy" smile (and an attempt at spinning, which I'll have to film later because he was too distracted to get a good spin in):

And that wraps up our artsy-fartsy weekend!
Posted by Nancy at 12:25 AM