Despite Benjamin's teacher only wanting him to be reading at a level M when he finishes grade one (which means she hasn't tested him to move reading levels and hasn't been giving him any sort of challenging reading material all year long), he brought home a book report today about his favourite book, which is currently Little House on the Prairie.

This makes sense because (A) we've been reading through the series, but also because (B) it's like history time (his favourite pastime) and (C) it's been teaching him a lot about how to be a mountain man, which is still his chosen profession (though he's since decided that he could also like to go to school to be a doctor because that would only help him when he goes off to be a mountain man and because he was born in the year of the dragon and that's something kids who were born in the year of the dragon tend to do (and he wrote about this in a school assignment as well and I'm sure his teacher found it puzzling but...that's just what our dinner conversations are like sometimes)). 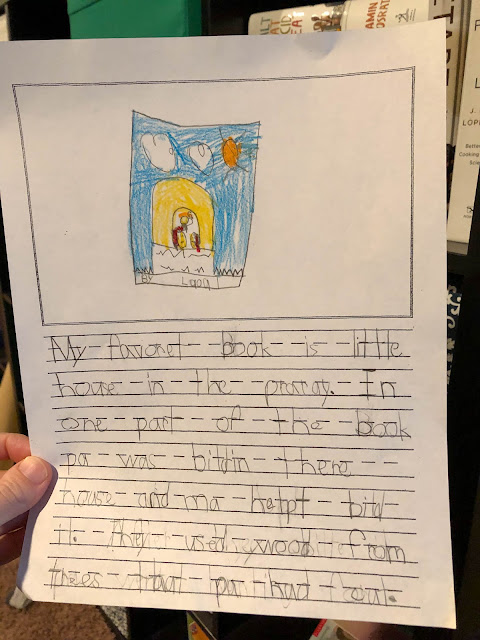 It says (in case you're not fluent in small-child writing):

My favoret book is little house in the praray. In one part of the book pa was buildin there house and ma helpt build it [sic]. They used wood from trees that pa had cut.

And on the verso:

They also used pegs that pa had made.

He drew a picture of the cover on the top half of the page and it says, "By Laoa" on it, which is the most darling phonemic spelling of the name Laura ever. I'm sure he could have gone on to explain more about the book had he been encouraged to do so but...you know...they're only encouraged to write three sentences about anything, so he fulfilled the requirements (and then went onto the back).

He loves the long (what I consider one part interesting, two-parts boring) descriptions of how everything was built back then. We just read the chapter "Bobsled" from Farmer Boy this evening and he was riveted through the whole chapter, which was literally a step-by-step process of how they built the sled.

Zoë was relatively interested, too, actually. I closed the book and threatened to quit reading right in the middle of the sentence I was on because she'd done something to torment Alexander (again) and she just started howling.

"Yes, please, Mom! I have to know how to fit the tail of the bobsled on!"

Seriously kids? If you insist (and if you leave your little brother alone).

Anyway, both Little House on the Prairie and Farmer Boy are level Q books (and she's had Benjamin sitting at a level L for months on end, refusing to test him or move him up so that he can finish the year neatly on level M). At least I can challenge Benjamin at home.

I'm going to stop obsessing over this now. I'm sure he'll be fine.
Posted by Nancy at 2:23 AM