Rachel was kept hopping on Wednesday and Thursday with four performances of Cinderella! We skipped her matinee shows and instead hit her evening shows. Andrew had to work late on Wednesday so Grandpa and I took the little ones and saved seats for Naanii and Auntie Josie. On Thursday Andrew and I took the kids again (since Andrew hadn't seen it yet and I didn't want to stay at home with all the kids).

Small children were invited to sit on the floor at the front of the gym, so it was actually a rather relaxing evening. I don't know 100% that they behaved up there, but they probably behaved better than they would have had they been sitting back with us!

Benjamin got to see the show all four times, while Miriam only saw it twice (because she stayed home sick on Wednesday).

Anyway, Rachel was one of the narrators, which means she popped on stage a few times to give a few short lines, but was mostly off stage. She was mostly excited about her costume—black pants, white top—because she prefers to not dress up, when she can. 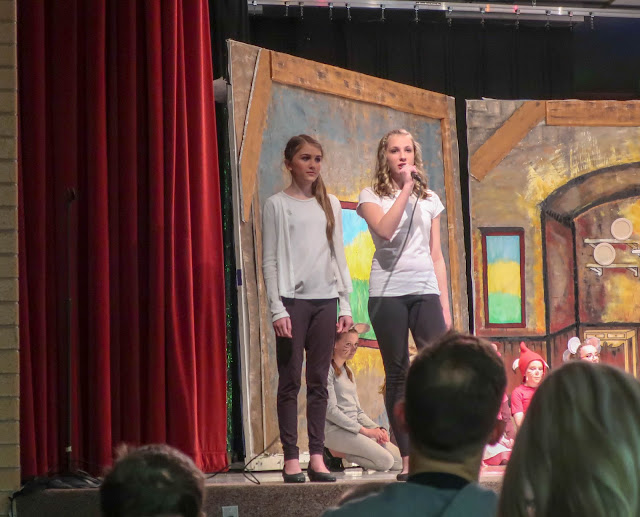 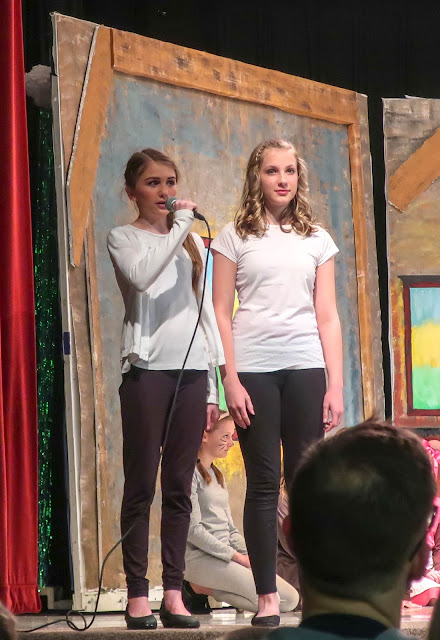 Here are all six narrators together: 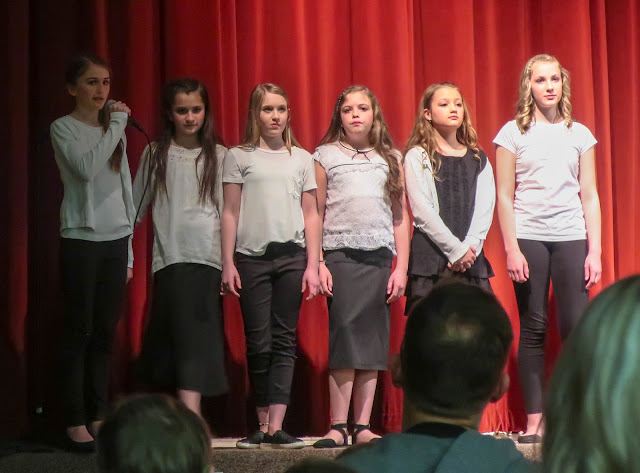 And here's Rachel on stage for the one song she sang: 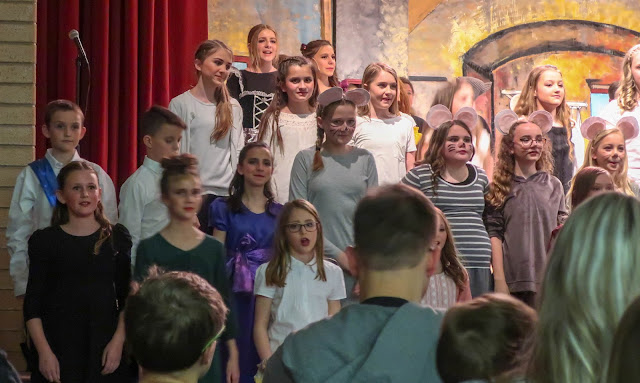 She was rather unanimated the first night that we watched her, so I showed her the video of herself so she could see just how much room she actually had to move her arms and the next evening she did a much fuller job (which we unfortunately didn't film). I think it's pretty cool that she's brave enough to take constructive criticism and improve herself, rather than shying away from hard things.

She had a wonderful time with her friends at play practice, but we're also kind of glad it's over so we can have some free time again: 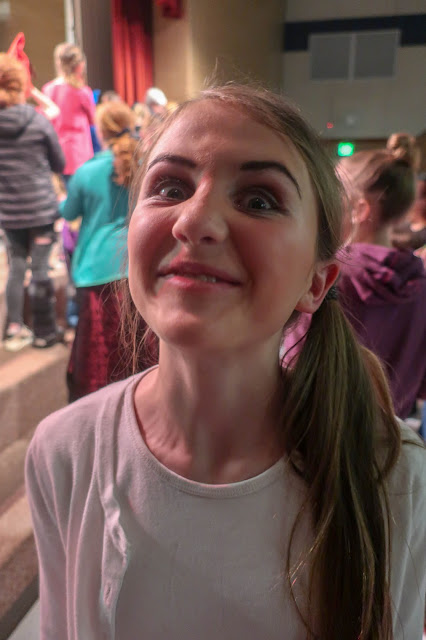 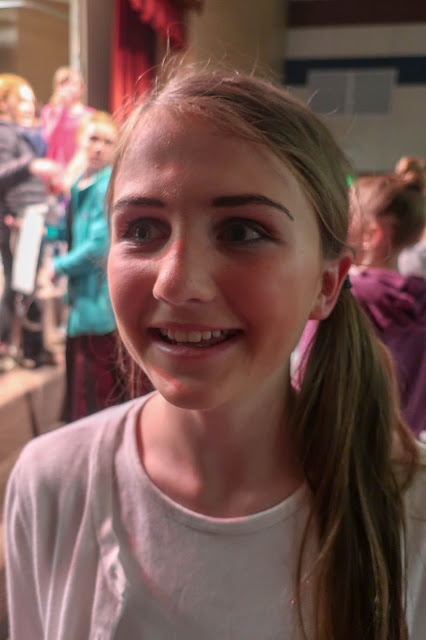 On Wednesday evening the Beehives came to watch the show to support all the girls that were in the show. This isn't every body who was there, but it is quite a few somebodies: 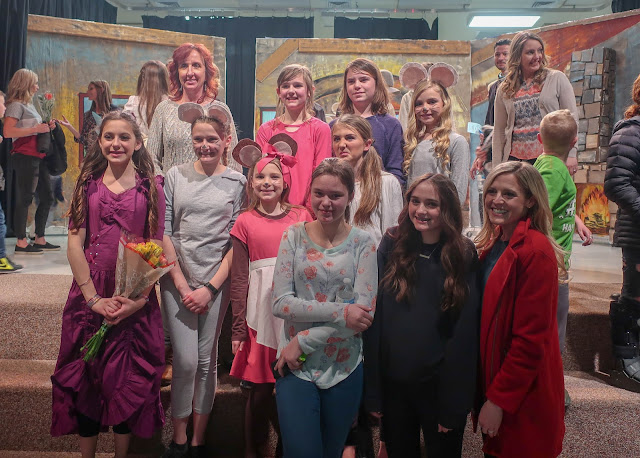 We had to take two pictures because Rachel (in the middle) kept pulling silly faces: 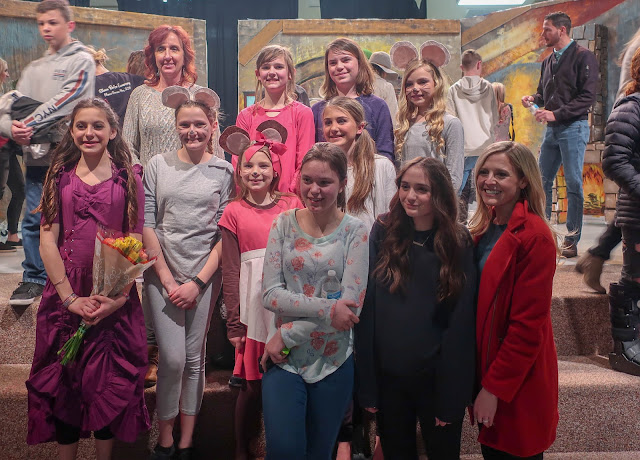 Here's Rachel in front of the pretty spectacular set: 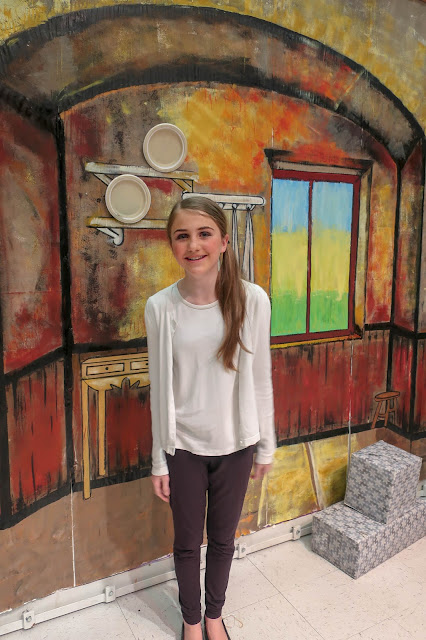 And here she is with a few of her good friends:

Rachel hasn't quite hit the post-show blues yet, but is already hankering for another musical opportunity. In fact, at the beginning of the school year we'd advised her to not to choir since she was doing so many things, but she begged us to let her join choir for the second half of the school year "because they're doing show tunes, Mom!" So that will have to fill her musical cravings for now.
Posted by Nancy at 11:50 PM