We spent a relatively quiet Christmas Eve day at Andrew's parents' house. My mom, David, Josie, and Grandma Layton joined us for dinner, along with Grandpa Frank, Katharine, Todd, and Kayl. We had the traditional beef and green chili burritos (Karen's family tradition) for Christmas Eve dinner and then my grandma was ready to go home.

She's been going downhill relatively fast the past couple of years. She's spent her whole life taking care of everyone else--raising her seven children, helping to run the family business, and then taking care of my ailing grandfather until his death. After he died it's like she hasn't know what to do with herself. She's suffering from dementia quite badly now and after my mom and I got her inside her house (it took a few minutes to convince her to go through the proper door because she's was sure she could open the garage with the code--but, of course, she couldn't remember the code) and helped her settle into her living room (finding light switches and showing her where my mom'd left Christmas presents) we turned to go and Grandma said, "Thanks for coming to see me."

We hadn't come to see her at all. We'd only been in her home for a couple of minutes. It had been she who'd come to see us.

Mom and I drove back to Andrew's parents' place and we played a quick game with David, Rachel, and Miriam before settling in for the nativity story.

Rachel was the narrator, Miriam was Mary, Benjamin was Joseph, and Baby Nora was Baby Jesus. Cousin Kayl, Grandpa, and Aunt Katharine were the three wisemen. Andrew was the awkward fourth because he couldn't remember whether he was supposed to be a shepherd or a wiseman. Uncle Todd was the shepherd, Uncle David was the sheep (named Haste, apparently, because Haste came with the shepherds to the stable), and Auntie Josie was the angel. 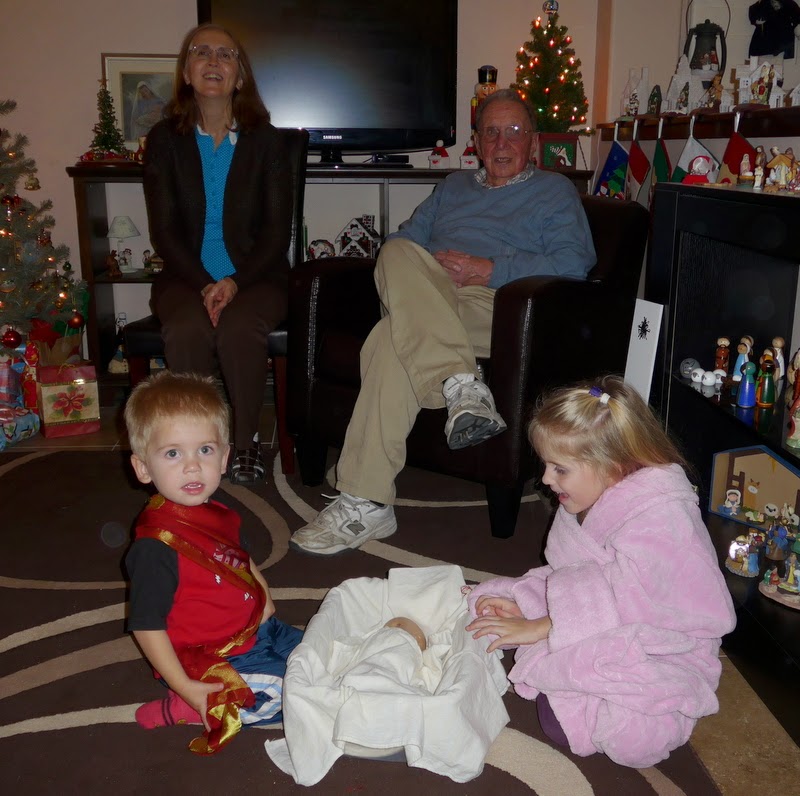 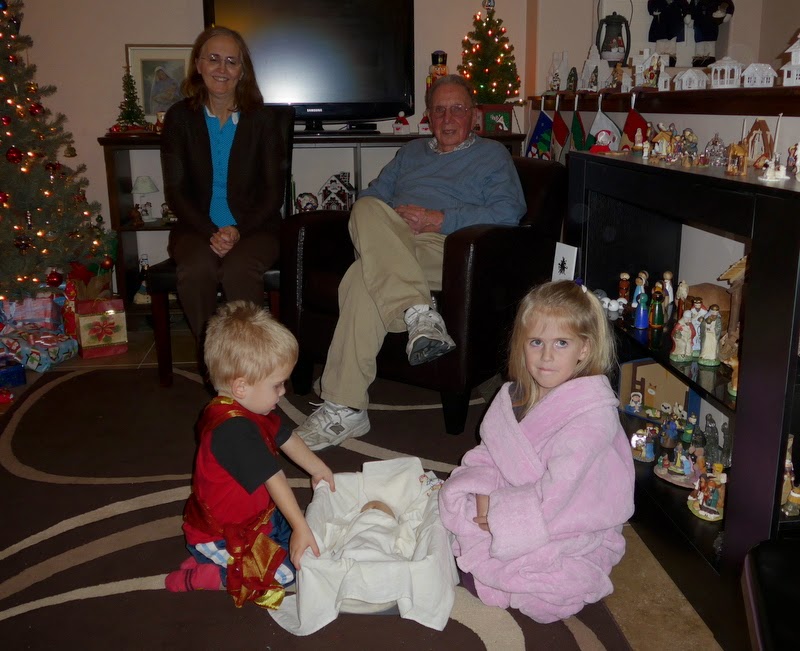 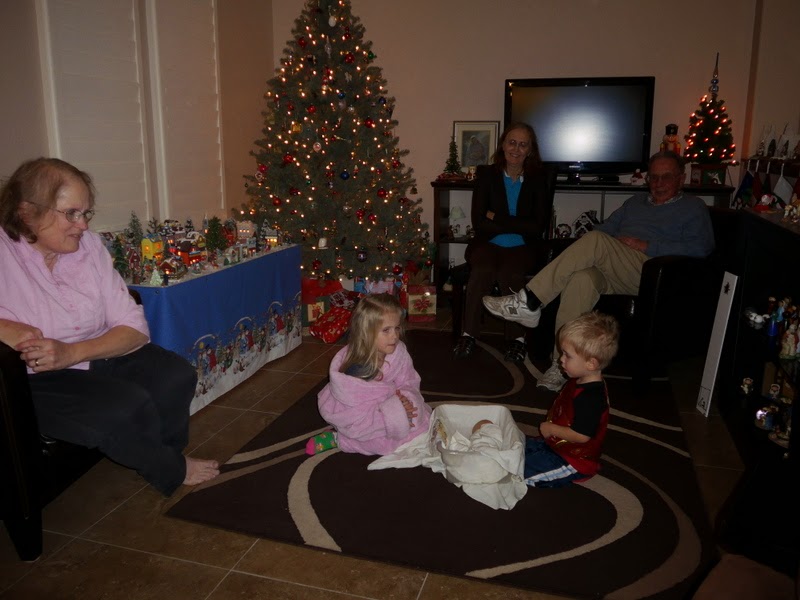 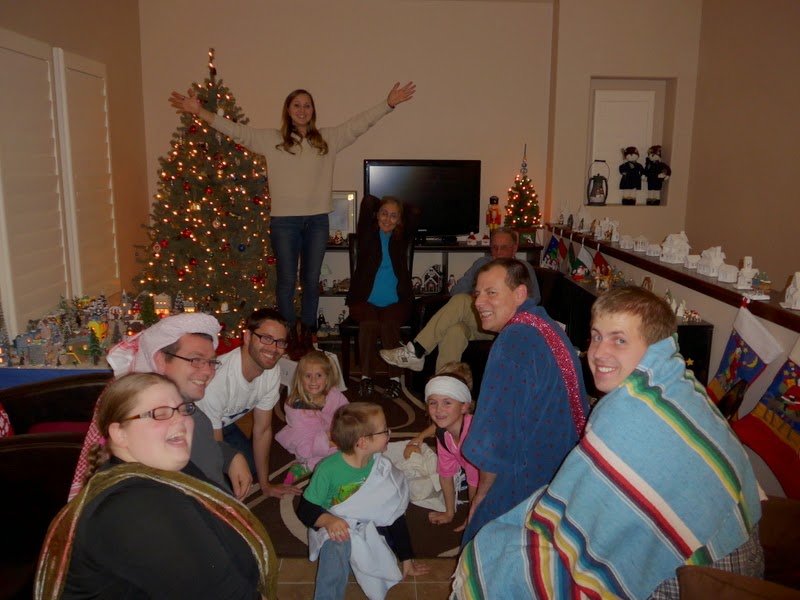 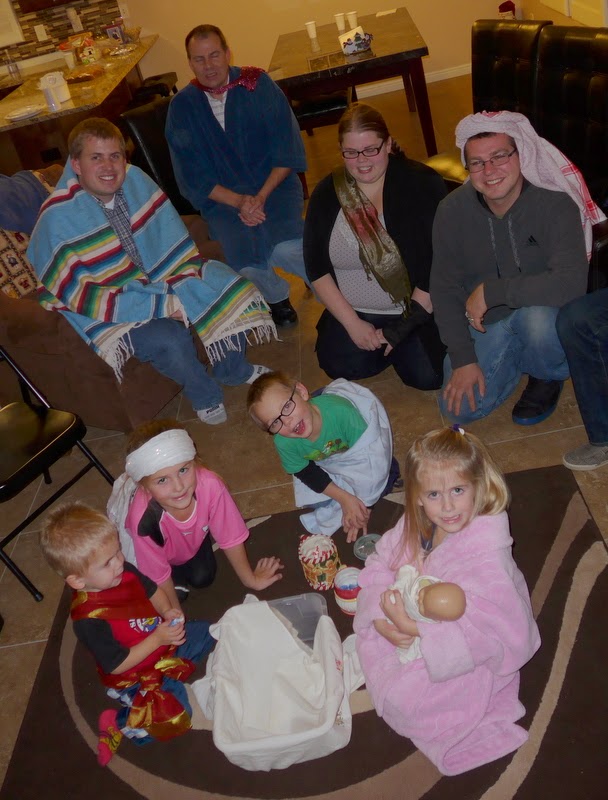 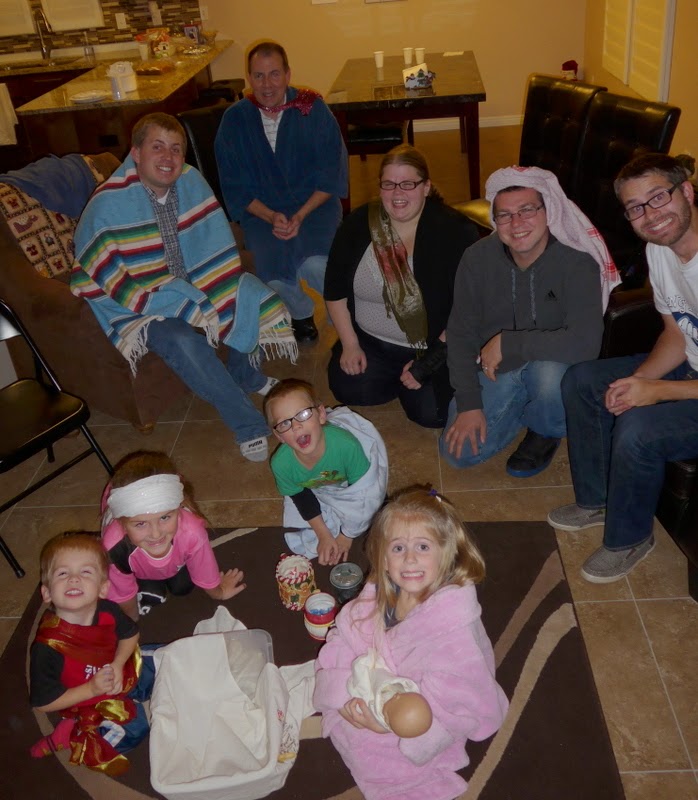 After the nativity story, we took turns telling stories about Christmases past. Grandpa Frank told about meeting the Krampus while on his mission in Germany. They were at dinner at a member's house when suddenly a devilish character dressed in black, with horns on his head, armed with a chain and a stick, started pounding on the window. The children knew what was going on and they dove under the table, terrified.

"Don't open the window!" they begged, but their father went ahead and let the Krampus in.

He tormented them each in turn, making the children recite multiplication facts and pounding on the table with his stick when they got an answer wrong. Then he turned to the missionaries and asked them if they were being good missionaries. He chased them around the room and spanked them with his sticks, right on the rear. The children, who moments ago had been so terrified, thought that this turn of events was great fun.

After Grandpa Frank's story was over Reid told about the time his friend Bob dressed up as the Krampus and burst into one of their family dinners at Christmas--wearing a scuba suit, wrapped in bicycle chains, he chased Grandpa Frank around the house.

Bob is a childhood friend of Reid's and he's been doing some work on Reid and Karen's basement. The children are slightly terrified of him, especially Benjamin (more on that later), so when Reid mentioned "Bob" and "Krampus" in the same sentence, Benjamin latched onto the concept and wouldn't let it go.

He spent the rest of the evening worrying about the Krampus. The Krampus has scary teeth, and he wears black (or sometimes green, according to Benjamin), and he drums on the windows and doors, and he bites children, and he's very, very scary! Benjamin was talking about him incessantly.

After company (besides us) went home, we sent the girls down to the basement to clean up the toys. Instead of cleaning up they started fighting. Andrew started heading down the stairs to set them straight, but Karen stopped them.

"Go outside and bang on the window," she suggested. "I need you to go put the cover on before it snows, anyway. Bob left it off. He used that window to bring supplies into the basement and never put the cover back on."

So Andrew did. And the children freaked out splendidly.

For good measure, Andrew banged on the upstairs windows before coming inside.

Benjamin was going on and on about Krampus. I couldn't help but break out the video camera:

We've since told Benjamin that the Krampus comes when little boys poop in their pants (he's been having a hard week with that; travelling always seems to throw little ones off the potty-trained wagon (and fear can be an excellent motivator)) and he's had a few close calls. "Sorry, Mom," he told me once as he tugged me toward the bathroom. "Krampus not come tiny poops? Just tiny poops, Mom. Krampus not come."
Posted by Nancy at 12:13 AM