We've been working hard to transform the basement from a dank, scary cave into a place worthy of play. We weren't looking for anything fancy. Just somewhere our children could play without inhaling mold spores or getting caught in Aragog's web or getting lost in some deep, dark corner somewhere.

So we had the basement walls sealed so that rainwater wouldn't pour through them anymore. We ripped the carpet off the ceiling and walls and floor. We had someone come in to frame the basement and install electricity for lights—and even put them add switches instead of a pull-cords (fancy). Then we decided to sand the carpet glue off the floor since our contractor told us it would make it easier to keep the floor clean.

In the long run, he meant to add (I'm sure), because—boy, howdy!—did we ever make a mess!!

At first we tried scraping it off with a little scraper tool. I spent about an hour scraping and covered about one entire square foot. It was ridiculous. Andrew tried scraping, too, quite sure he would be better at it than I had been—and he was. But it was still slow going. So he decided to rent a floor maintainer, a hulking behemoth of a machine.

It was much more efficient...once we figured out how to work it.

Andrew turned it on and it yanked him across the room, leaving a wild swirl of uneven scrapes across the floor. He tried a second time and again it went screaming around the room. Finally (after watching a few YouTube videos), Andrew learned that you have to really lean into it and use your hips and entire upper body to kind of guide it where you want it to go.

Once he knew what he was doing, we zoomed through it.

And by "zoomed" I mean it took us like five hours.


The kids made themselves dinner (chicken nuggets and peas), played together, and finally settled in for a movie (in addition to bringing us things when we called—ear plugs, garbage bag, another garbage bag, a cup of water, go see if Mr. Paul has a shop vac we can borrow...).

By the time we were finishing up the dust was so thick that we couldn't see each other across the room. Andrew was working the floor maintainer and I was busy sweeping up piles of dust, but we were both working somewhat blindly. It was awful, but it had to be done (and I've never been so thankful for a face mask in all my life!).

Here we are at the end of the evening when we decided to call things good enough: 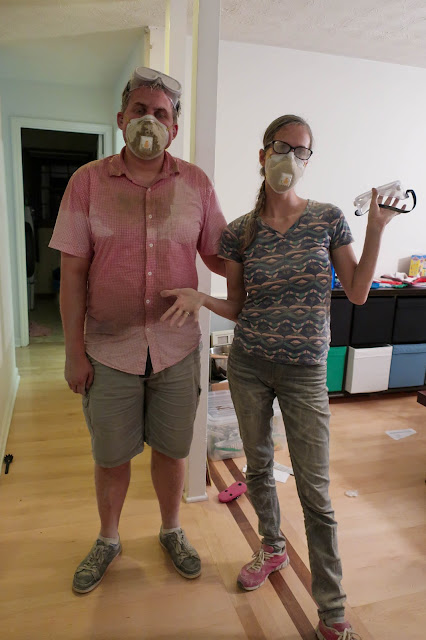 We left the dust to settle and spent Saturday afternoon sweeping, vacuuming, and mopping, and then on Saturday evening we put together some shelves and brought some of the kid's toys in.

We still have a lot of cleaning to do (from the dust that settled indiscriminately everywhere) but I think in the end it really will be easier to sweep down there...and it looks a lot better!

(House pictures are forthcoming, I promise...for anyone feeling anxious about that...)
Posted by Nancy at 10:12 PM