Canadian Thanksgiving (or: Why isn't our InstantPot instant-ing?!)

Due to Rachel's Monday evening soccer awards ceremony we had to postpone our annual Canadian Thanksgiving dinner. Tuesdays are usually somewhat crazy, so we planned on having Thanksgiving dinner today (because Thursday is far too crazy). Unfortunately, I forgot that Rachel had a doctor appointment this afternoon after school (and then we sat and waited for the doctor for over an hour before we were finally seen) so today ended up being a little crazy as well!

Plus they were out of the flu shot so we have to go back again.

All four of the older kids have had their annual check ups now, though. I was going to do them all on the same day but Rachel had a field trip the day of our appointment so I had to cancel her slot and reschedule her for today. Alexander's well-check is scheduled later this month.

Rather generally, they're healthy kids.

They're all tall and thin for their age (even Benjamin; I never thought I'd hear a medical professional tell me, "He's rather tall for his age!" but here we are) except for Miriam, who is short and thin for her age. On the way home from the doctor she said, "I've just decided that I'm going to be the shortest person in the family. That way I won't be disappointed when I am."

So all that was left was the turkey (we just got some turkey breast), cranberry sauce, stuffing, and green beans. No big deal.

Miriam made the cranberry sauce more or less on her own. I guided her while I made some topping for the sweet potatoes and put the turkey in the InstantPot (which really lives up to its name). I set the turkey to cook for a half hour after looking at various recipes online and hoped for the best.

By the time we had everything prepared the turkey timer was just about over so we waited those last few moments, released the pressure, and stuck in the thermometer. "89 degrees!" Andrew exclaimed."That's not even near done! We know from West Wing that it's supposed to be 165!"

Considering we had put raw (not frozen) turkey breasts into the InstantPot this was rather odd to hear. I can cook frozen chicken breasts in a half hour. Why was our InstantPot not instant-ing?!


Andrew put the turkey into the oven to finish cooking while we ate our now-vegetarian Thanksgiving meal, which was delicious. The sweet potatoes, to my surprise, we gobbled up—no leftovers! I wonder if it's because Andrew accidentally bought white sweet potatoes, rather than the traditional orange. Or it could be the marshmallow topping. I don't know.

The cranberry sauce was a big hit, too. Miriam's "family project" for the month of October is to prepare a family recipe (with her family) and then write up the recipe to share with her class (her teacher is compiling a cook book). We're contributing whole-berry cranberry sauce because we all love it and we use it year-round (for both our Thanksgivings, as topping for sweet potato or pumpkin pancakes, as a sauce to go with our meatballs when we have "IKEA" for dinner, and so forth).

1. Wash cranberries.
2. Dump all ingredients into a medium-sized pot. 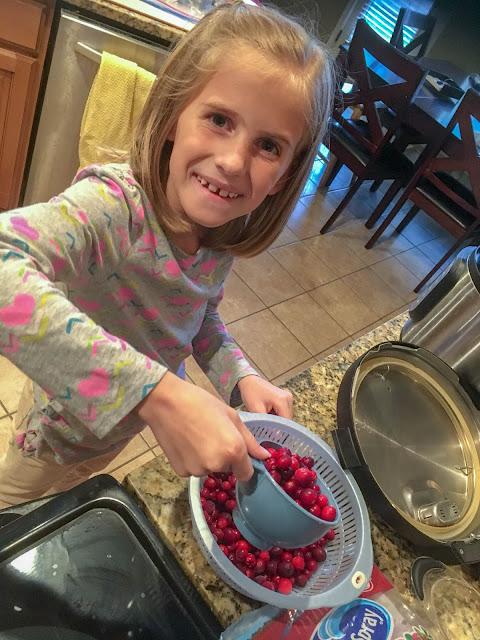 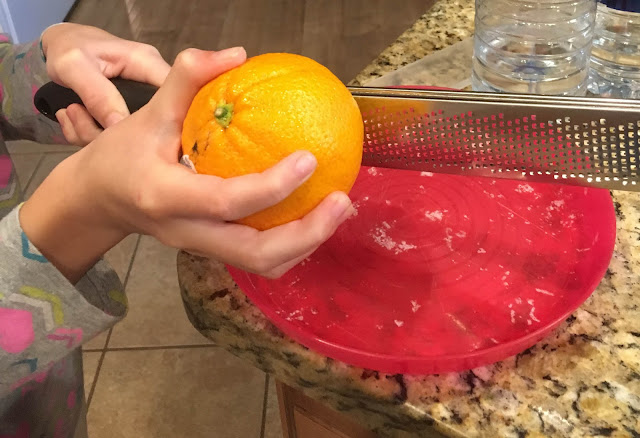 2. Bring to boil on medium heat, stirring fairly constantly to make sure it neither splatters all over creation nor scorches on the bottom. When the berries start popping you're almost finished. The longer you boil, the thicker your sauce will be. About 10 minutes is good. 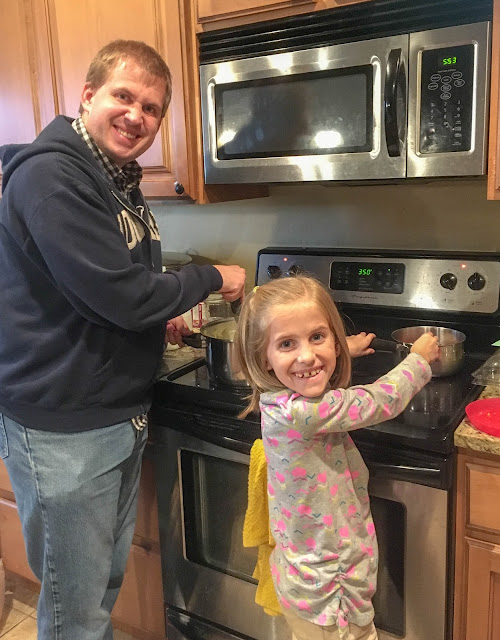 3. Let cool for a few minutes, then pour into a serving dish. Enjoy! 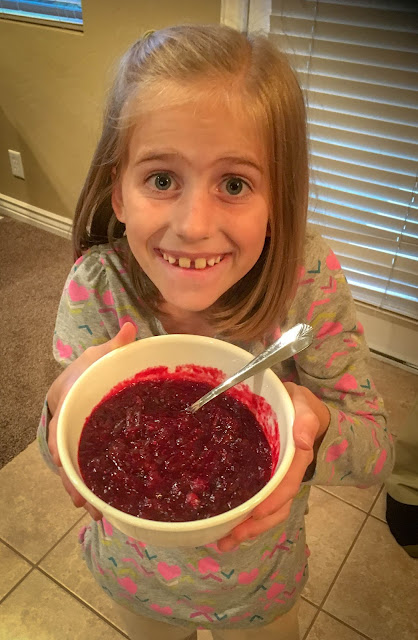 I think we might even try canning some cranberry sauce this year because we always want it at other times in the year so we stock up on cranberries, which we keep in the freezer. But then we have to make it from scratch every time we want it. So why not bottle it?

I looked it up and it should work the same as any other jam.

Speaking of canning and Thanksgiving we thought it would be fitting and proper to break open some of our harvest from this summer. Behold the literal fruits of our labours:

They turned out just beautifully, if I say so myself.

After dinner we hurried upstairs to do our family home evening lesson/activity because we'd neglected to do that on Monday (because soccer). We reviewed the story of the ten lepers and started on our Thankful Tree, which is an aspen this year. In years past I have coloured paper brown in order to make the trunk of our Thankful Tree, but this year I realized that (life hack!) not all trees even have brown bark. So now we have an aspen tree in our living room to remind us to be thankful and to give us a chuckle because aspen trees are hilarious. 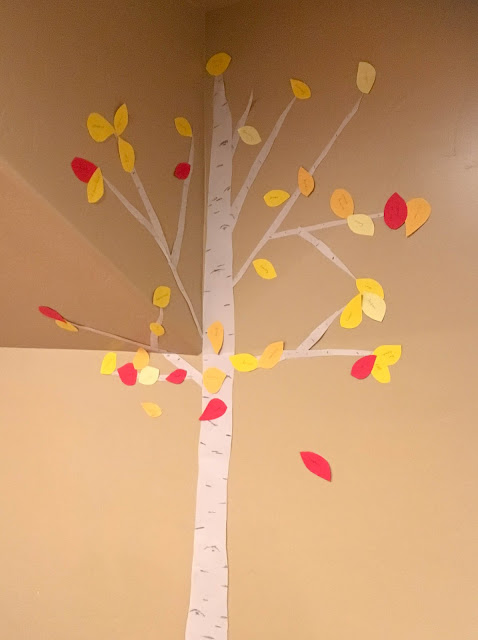 "You can tell that it's an aspen tree because of the way it is."

We had to show the kids that "Neature" episode because ever since we watched it (a decade ago) we haven't been able to mention aspen trees without thinking about it.

And then we watched a Lego version of the ten lepers that was on YouTube.

And then we voted that it was far too late for pumpkin pie, so we'd do pie tomorrow.

But then somehow Benjamin and Zoë thought that we'd voted to have pie tomorrow and today and were terribly upset when that wasn't the case.

So I sent them to bed without any pie, feeling a whole lot like that mother cat from the nursery rhyme Three Little Kittens. "Then you shall have no pie!"

With the kids mostly tucked away neatly in their beds, Andrew went down to check the turkey again while I nursed Alexander, because, here's the thing: it had been in the InstantPot for a half hour and the oven for hours and it we weren't any closer to being done than we were when we opened the InstantPot. It was getting rather frustrating!

He came up the stairs laughing.

"You switched the thermometer to Celsius, remember? Do you know what 89°C is? It's 192°F! The turkey was cooked all the way when we took it out of the InstantPot and now it's just been drying out in the oven!"

It's true. I switched our digital thermometer to Celsius while I was canning applesauce last week because I needed to know exactly how close my water bath was to the true boiling point (sometimes it's hard to tell what constitutes a rolling boil, even with the bubbles, and I'm super paranoid about accidentally killing our entire family off via botulism (thanks a lot, East of Eden)). Unfortunately, I can never recall what the boiling point is in Fahrenheit (212—what sort of rando number is that?!) so taking the temperature of the water in Fahrenheit is useless for my brain. But measuring the temperature in Celsius—a beautifully even 100 degrees? That I can wrap my head around.

Both Andrew and I are used to checking meat temperatures in Fahrenheit, however, and neither of us noticed that the thermometer was still set to centigrade until we were hours too late.

So now we have a dry turkey (probably heading for a stew) and a funny story about how mixing cultures into one household can sometimes be confusing.

Happy Canadian Thanksgiving! It is officially fall.
Posted by Nancy at 12:44 AM