This morning I woke up and remembered that Benjamin was supposed to give a talk in primary today. Luckily we woke up with time to spare since the kids woke up well before my alarm went off and we didn't have to be to church until 10:30 (yay!), so I assigned Benjamin the task of writing three sentences about how he can be responsible for his own learning (since that was today's topic).

He and Zoë sat at the table writing and colouring, respectively...though not respectfully. They were elbowing each other and touching each other's papers and driving each other crazy.

It took twenty minutes (which was fine because I was nursing the baby and didn't want the other two in my hair anyway) but Benjamin finally came up to me with his three sentences and we sat down at the computer to flush out his talk.

His three sentences were:

1) Read The Book of Mormon every day.
2) We bulev that we can teach are own lernings.
3) We love Come Follow Me.

Clearly we had a bit of work to do. So we were talking about things and expanding his ideas when there was a crash and a clatter and...where was the baby? 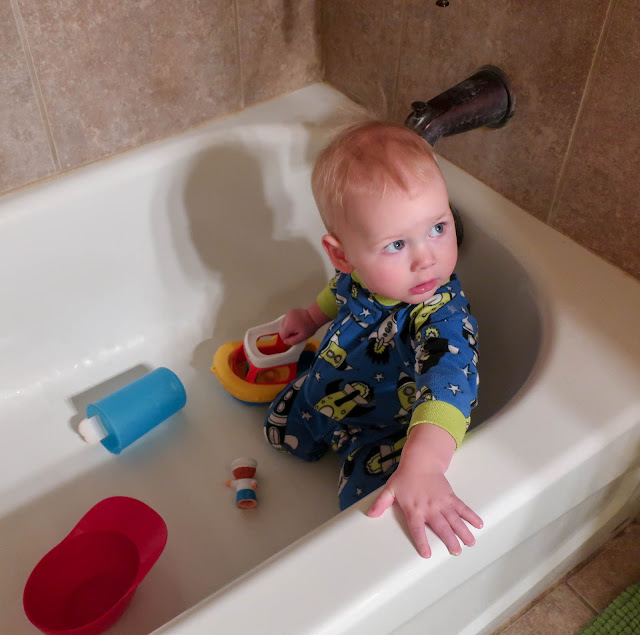 
Just so you know, he can turn on the water as well, so he was a bit of a soggy baby. 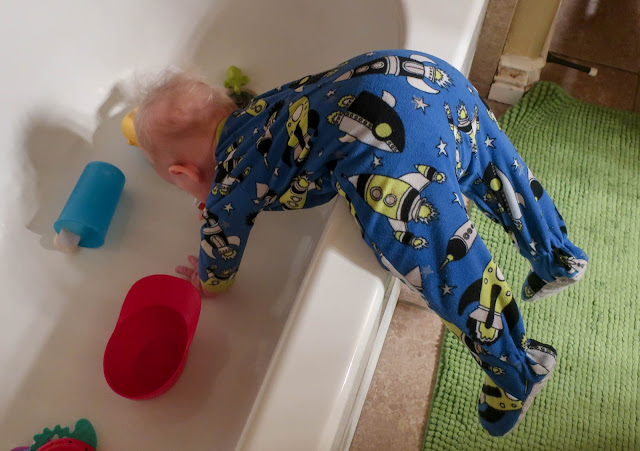 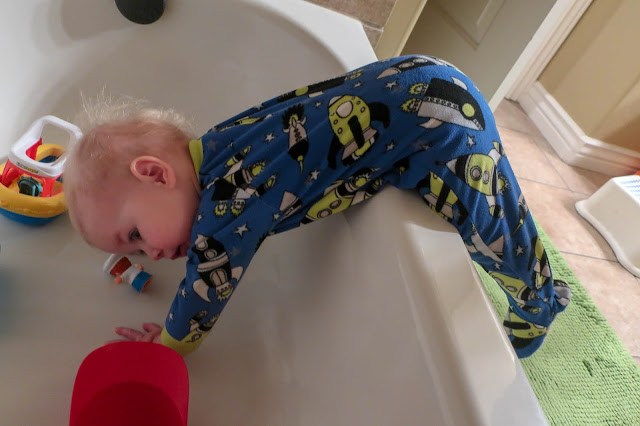 So I secured the bathroom and settled in to help Benjamin again.

By this time Zoë was playing at the piano, with headphones on (so it was silent for us), and Alexander was puttering around by my feet (which makes it a little harder to focus on any task at hand), and Benjamin was straying hopelessly from his topic (asking about Black Panther and Star Wars).

I turned to look at her and she was holding the music stand for our piano. Since our piano arrived in a flat box—some assembly required—I know the music stand is entirely removable. Unfortunately, she removed it in entirely the wrong way (she tried to fold it down, I guess) and snapped the connectors clean off. 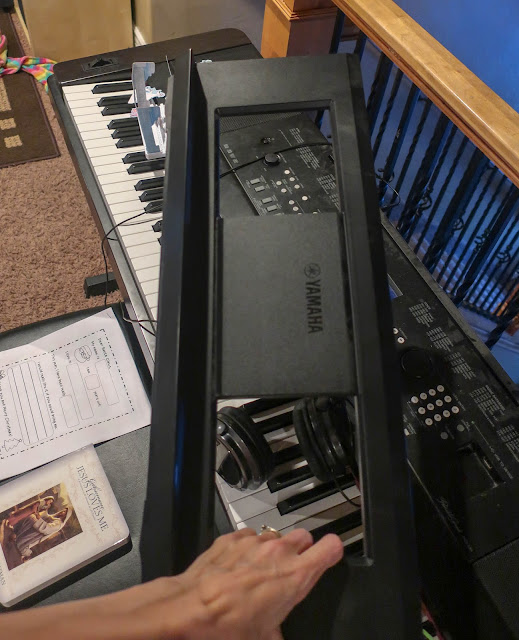 Andrew managed to pry the broken clips out of their slots on the piano and found that, although our particular make of piano has been discontinued, we can order a new stand for it. We also found that we can balance it well enough to hold up a music book or two (with the help of the banister behind it) so we'll wait to fix it until after we move.

Despite all the excitement of the morning we still managed to make it to church on time. We had sacrament meeting and testimonies and then broke out for one (one!) hour of classes. I had been asked to substitute in Zoë's Sunbeams class so I went to primary with Benjamin and Zoë, which made it very easy to listen to Benjamin's talk.


We learned this week that we are responsible for our own learning. We read some scriptures together as a family about how to gain our own testimonies. One scripture that we read was John 5:39— “Search the scriptures: for in them ye think ye have eternal life: and they are they which testify of [Christ.]”

We made a goal to read The Book of Mormon every day on our own, to study together as a family, to memorize some scriptures so we can ponder them whenever we want, and to follow the Come Follow Me book. We made a chart so we can mark off what we read. I am still in 1 Nephi and have missed reading a couple of days but that’s okay. I’m going to keep trying so that I can strengthen my testimony.

We’re going to keep studying as a family, too. We love the new Come Follow Me book and are excited to be “doers of the word and not hearers only" (James 1:22).

In the name of Jesus Christ, Amen

He did very well.

I had been a little reluctant to agree to sit with the Sunbeams when I was first asked because while Sunbeams can be awfully cute they're also all very much three years old, and as we all know, three-year-olds are the absolute worst, especially when they're fresh out of nursery and have no idea how to sit still for primary. It was much easier to say yes when I remembered that I only had commit to helping out for one hour instead of two. But then the person I covered for was like, "Thanks! There's just twelve of them and Sister So-and-So has the lesson so you don't have to worry about anything but showing up!"

That is far too many Sunbeams to have in one class. Trust me. I've spent a lot of time in primary (and have taught Sunbeams in three different wards). But, you know, I'm not the one calling the shots so, whatever. I can handle twelve three-year-olds for an hour.

The first half hour was spent in the primary room anyway. Benjamin gave his talk and did very well. And then we had singing time (where we just watched music videos of all the songs we'd be learning this year, which was...fine...but definitely hard for the Sunbeams (among other children)). And then we were dismissed for class, which is only twenty minutes long (instead of closer to an hour like before).

Dismissal was a bit of a mess. Since we have such a short amount of time for class they were really trying to hustle us out of there, but we successfully corralled our children into our classroom (which was down the hall and around the corner, a fair distance from the primary room) and sat down with them to do some introductions.

"I'm your new teacher, Sister So-and-So," said Sister So-and-So. "And I'm so excited to have you in my class this year! Let's go through this list and find out everyone's name. When I call your name you can raise your hand and say hello, okay?"

And so she started at the top of the list, which was alphabetical.

She got to Zoë, who raised her hand and said hello, and then moved on down the list.

Finally, finally, she got to a cute little guy who we will call Hendrix W.

"Okay, Hendrix?" she said, looking around all those many little shining faces to find Hendrix.

Then her eyes locked on mine and we both stammered, "Where's Hendrix!?!"

"I'll be...right back," I said, booting Zoë off my lap and standing up.

I found the primary president in the hall and explained that we had lost Hendrix, who is a bit of a...stinker. We didn't know if he had gotten lost in transition or if he'd run off to hide.

"You go that way, I'll go this way," I told her and we made a round of the church (which is actually a horseshoe shape rather than a circle, but that's fine).

We checked the bathrooms. No Hendrix.

We checked the coat rack. No Hendrix.

We checked the nursery. No Hendrix.

We, again, checked the hallways, this time also checking each classroom. I did half of the building and met with the primary presidency in the middle.

"This side of the building is clear," I was told.

And then I went to find Hendrix's mom.

"Oh, that little stinker!" his mom said. "Don't worry about it. It's totally fine. He disappears so fast. That's why we were called to nursery for a while, actually, because he was always getting out."

She joined us in our search, but we didn't find him in any logical—or illogical—place. He wasn't anywhere.

Hendrix's mom found his dad and we started looking outside for him, even though (or perhaps because) it was snowing heavily. We circled around the building, we checked between cars.

"Would he have walked home?" I asked.

So Hendrix's dad hopped in the car and drove towards his house looking for Hendrix and I went back inside to look some more.

He wasn't anywhere and we were all getting a little panicked.

And then I thought I should just check the side of the building that I hadn't checked myself. So I peeked in one classroom—no Hendrix. I peeked in another classroom—CTR 5A (why does their class get to be split in two but not the Sunbeams?!)—and—lo!—there was Hendrix being such a good little boy, sitting all reverently on his chair and listening to the lesson.

"HENDRIX!" I half-sobbed, even though I had been trying to be calm. "This isn't your class!"

"No! You need to be in Sunbeams with me!" (he comes to preschool at our house so he knows me pretty well).

"I thought he looked a little small to be in here, but what do I know," said the (new) CTR 5A teacher.

"Come with me, Hendrix," I said, holding out my hand. "We need to find your mom because she needs to give you a great big hug!"

And thus I add yet another story to my losing-Sunbeams-at-church repertoire:

I'm, like, crazy good at losing Sunbeams (I have a one-per-ward rule the past ten years, it seems). Either that or Sunbeams are just crazy good at escaping.

I think I'll go with the latter...

So that was my wild Sunday morning: one soggy baby, one broken piano, and one lost child. Do I know how to start the year out right or what?!
Posted by Nancy at 12:00 AM