It's the last day of this sweet little boy being seven years old. We started celebrating him on Monday with a portion of our Family Night devoted to writing on balloons for his birthday tree.

Alexander scribbled on a balloon and when we asked him what it said shrugged his shoulders and shook his head while saying, "Anyfing." This means either (a) that his balloon does not, in fact, say anything, (b) that we could say that his balloon said literally anything and he would agree with us, or (c) all of the above.

Zoë worked really hard on her balloons. The long red one says, "I love Ben because he is kind to me," and the yellow one says, "I like! Ben! I like playing..." but, she explained, she ran out of room before she could write "with Benjamin," so that part is implied. She did not, however, run out of room to draw a picture of Benjamin on the balloon.

Miriam wrote an infographical balloon with facts about Benjamin. He is curious, he loves nature, and he is energetic.

And thus starts our theme of describing Benjamin as full of energy. Now, this is not a bad thing. There are few people in the world who would decline having an extra squirt of energy. Benjamin has plenty of it. And it's noticeable.

Rachel wrote an acrostic for BEN: Bouncy, Energetic, Never give up. She also wrote, "I love Benjamin because he builds cool Lego creations, loves to read, is funny, and always thinks about other people."

I wrote: "Benjamin—my determined little boy. You were determined to be born and you've been determined ever since. Use this quality well!" and "I am so impressed by how well you learn. Once you learned how to read you took off soaring. Master the basics and you can do anything!" I also wrote him a little haiku.

Energetic boy—
So eager to be helpful,
A joy in our home.

Andrew, who knew now that some of us were going to write "long" balloon messages, got a little wordy himself: "You are so creative and always full of energy" and "You always find ways to be happy and quickly switch away from bad attitudes."

Our celebrations continued today because Rachel asked if she could bake his birthday cake for a Young Woman camp project. This is the week she should be at Young Women camp but instead of holding a campout they're holding a "home" camp with zoom break-out sessions and devotionals for the girls. She had a little meeting at 11:00 this morning with the stake where they learned about friendship and then had an activity with our ward at 4:00 where they held a bake-off.

This is Rachel's favourite one. She is very proud of that runny mascara! 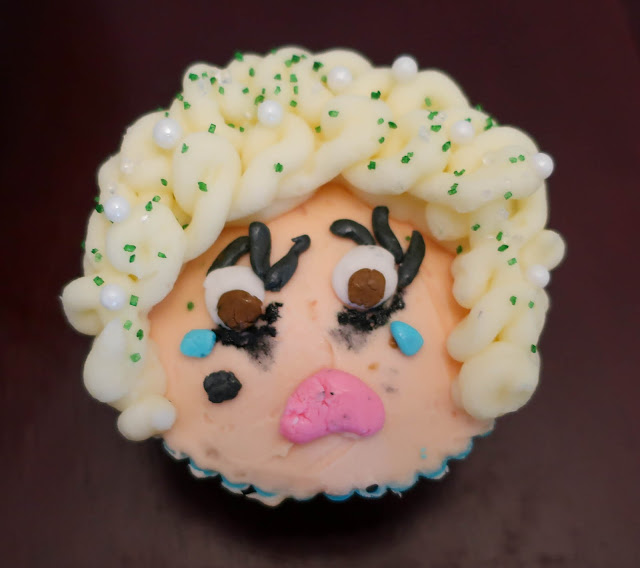 I believe this is Miriam's favourite one (Rachel said it was when I was taking pictures): 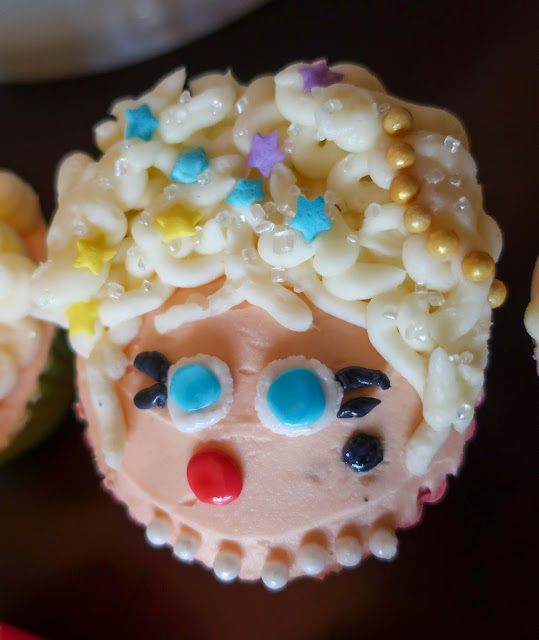 They made 14 cupcakes in total, displaying various emotions at the thought of being executed by guillotine: 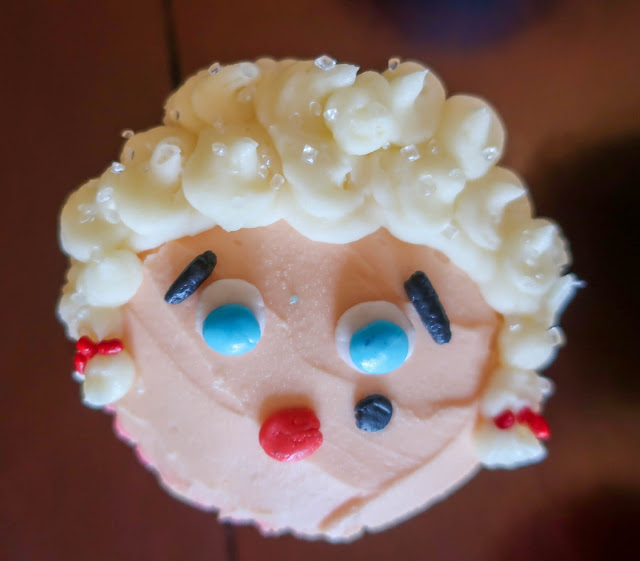 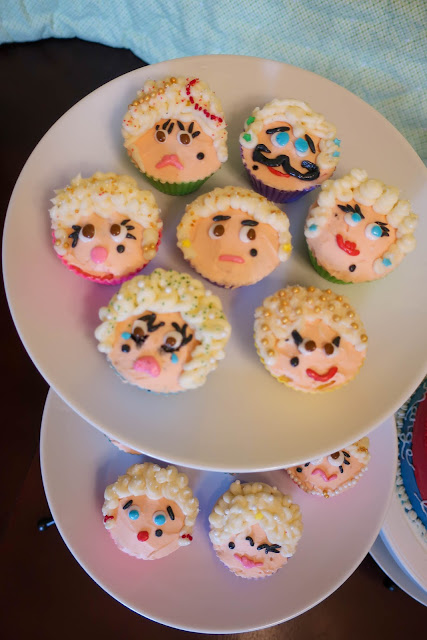 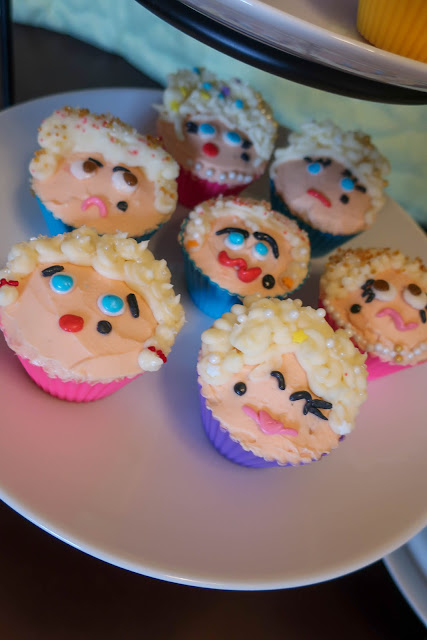 Today Rachel decorated the cake and mixed up some gingerbread dough. I helped her engineer a guillotine template that would fit together like a puzzle (so we wouldn't have to make royal frosting (we had already made so many things)). It was tricky to cut everything out and make sure everything would line up but in the end she wound up with a charming gingerbread guillotine. Benjamin demanded blood, however, so Rachel mixed some red food colouring in with corn syrup and... 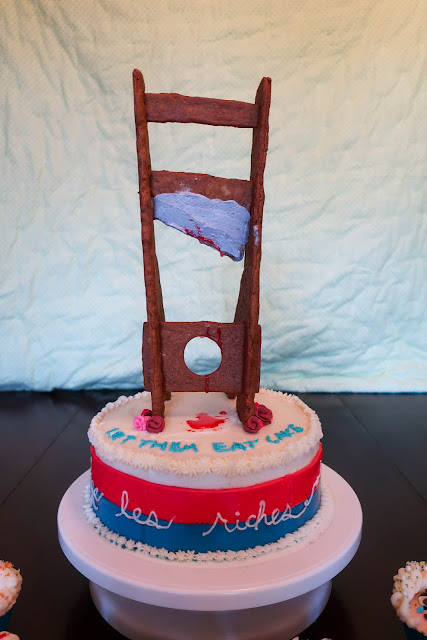 This is all perfectly normal, right? I mean, like, we are a normal family... Aren't we?

On the top of the cake Rachel wrote "LET THEM EAT CAKE," which we realized Marie Antoinette didn't actually say. However, Jean-Jacques Rousseau wrote the following words in his autobiography (which is a mix of truth and hyperbole):

At length I remembered the last resort of a great princess who, when told that the peasants had no bread, replied: "Then let them eat brioches."

Was it Marie Antoinette? Probably not (she was nine years old when the words were written). But did they aptly capture the attitude of the upperclass? Probably.

So we used them because, after all, this was an actual cake.

Along the red, white, and blue banner we (Rachel asked if I would do it because it's tricky to write on the side of a cake) wrote, "Mange les riches!" Another line, more or less, of Jean-Jacques Rousseau.

It was a whole lot of work for Rachel (and me, and Miriam). Here are far too many pictures: 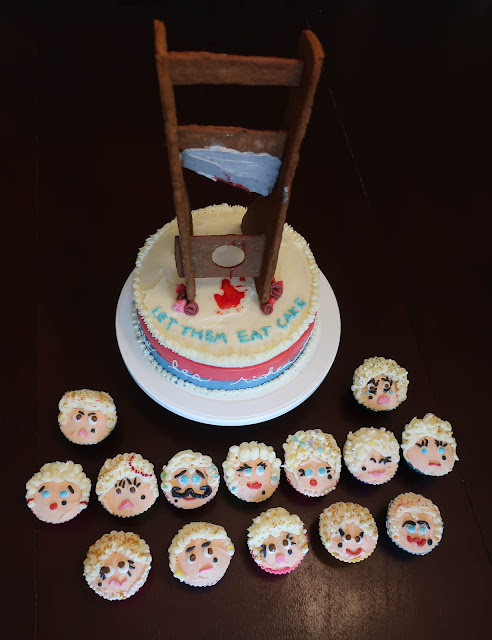 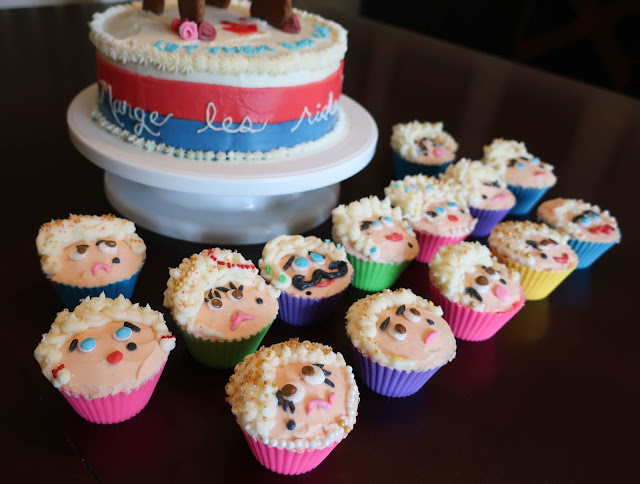 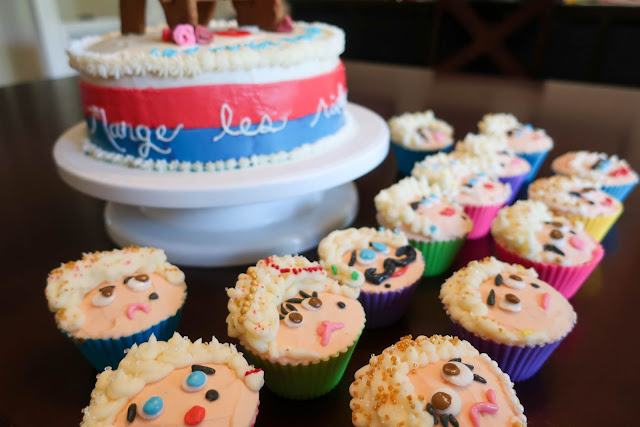 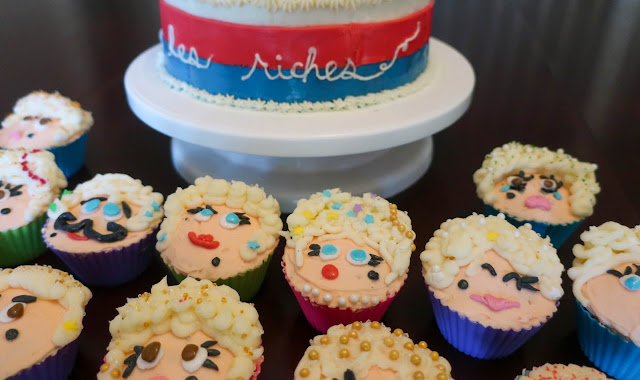 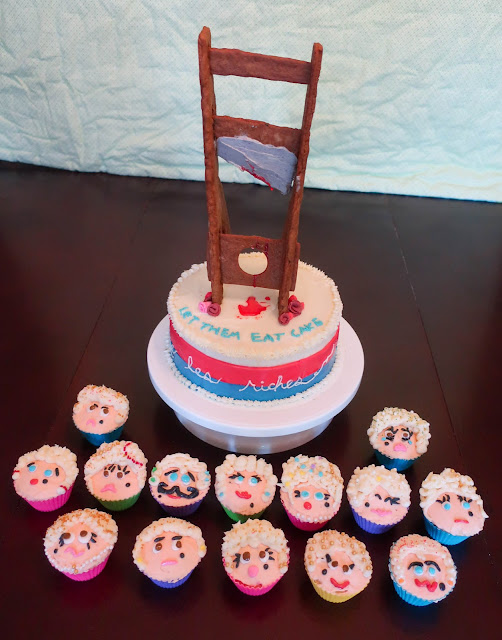 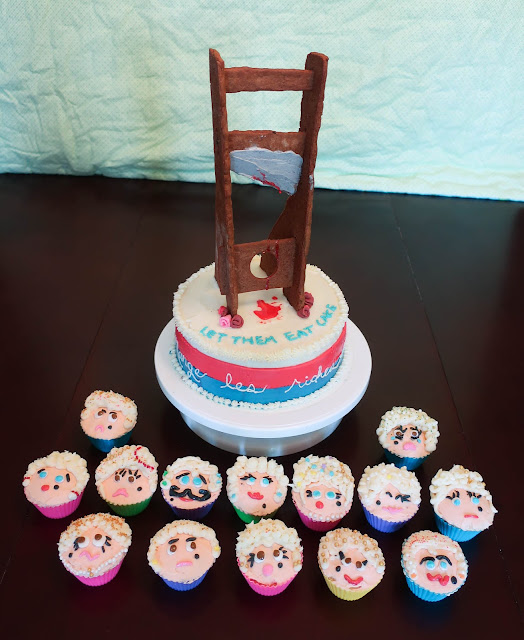 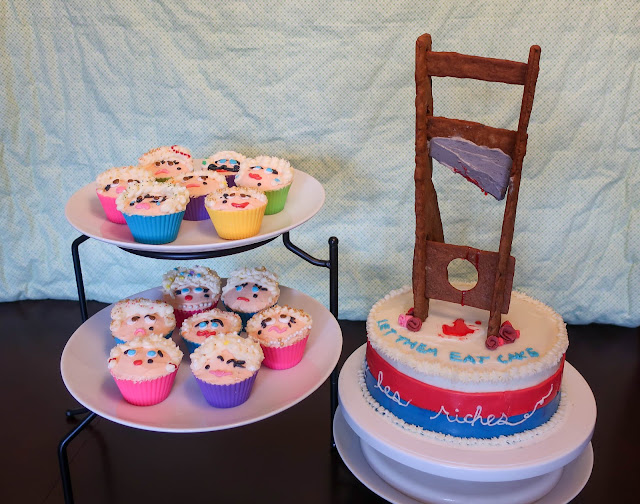 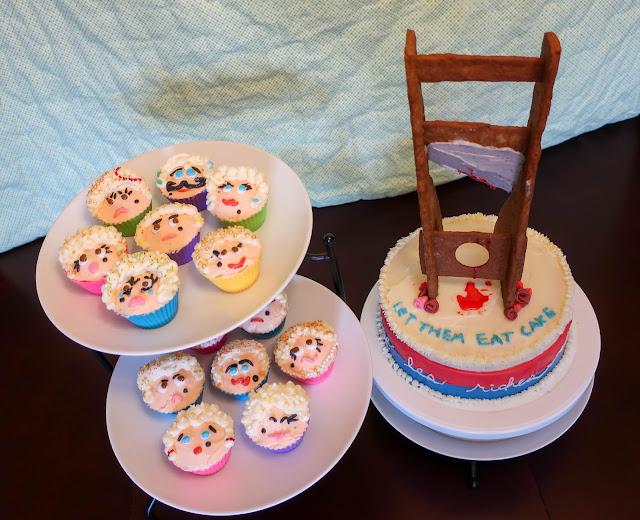 Rachel's fellow young women were pretty impressed with her cake-making skills. Her younger siblings were thrilled that she invited them to "zoom" with her. She wanted Benjamin there as proof that she hadn't been the one to select such a weirdly-themed cake. Her history-loving little brother did! They even used our big guillotine-like pizza cutter to chop a cupcake in half so they could show off the oozing insides. It was pretty great! 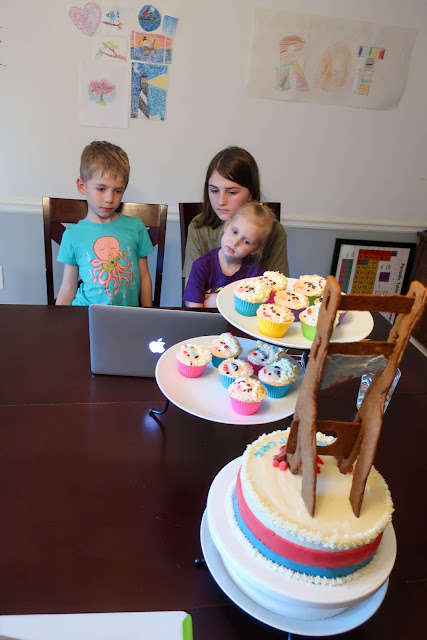 After the young women had shown off their baking adventures they played a round of "Would You Rather..." and included Zoë and Benjamin in their game, which was so sweet of them. (Actually, before that, one of the leaders asked if anyone had anything else to share and Alexander, who isn't in the picture but who had been on Rachel's lap earlier, said, "I do!" and he showed them a picture he had drawn). Rachel's Young Woman President asked Zoë if she would rather have dinner with Elsa or Anna.

"Elsa!" Zoë answered confidently. "Because she is my favourite character of Frozen."

Then without even hesitating she called on one of Rachel's friends and said, "Would you rather eat a cupcake or a pie?"

"A pie," the girl said, "Because I haven't had pie for quite a while."

Someone asked Rachel a question and then because she'd already had a few turns she allowed Benjamin to ask the next question. He asked, "Would you rather die on the battlefield or by guillotine?"

Everyone laughed because his question was very different from any of the other questions that had been asked (it was—how do you say?—very Benjamin) but it ended up being a thought-provoking question. The guillotine, it was argued, would be swift and sure. But it might also be nice to die fighting for something you believed in. And so forth.

Because we live in the south and humidity is starting to kick in, we decided we had better sing over the cake today because the gingerbread wouldn't last until the morning. It had baked up hard (as it's supposed to do, Emily) but it was getting softer by the minute.

By the time we returned from our post-prandial walk the guillotine had partially collapsed, so we stuck it back together with a little icing for glue and then quickly sang to Benjamin, who wasn't terribly happy we were singing to him on not-his-birthday (but we promised we would also sing to him tomorrow, over the cupcakes this time, so he quickly changed around his attitude (something he's good at doing)). 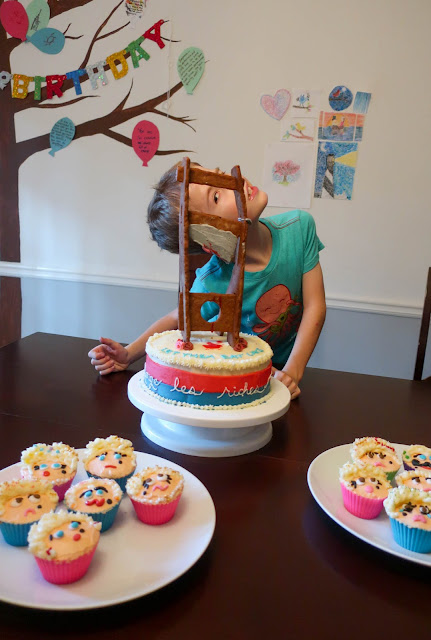 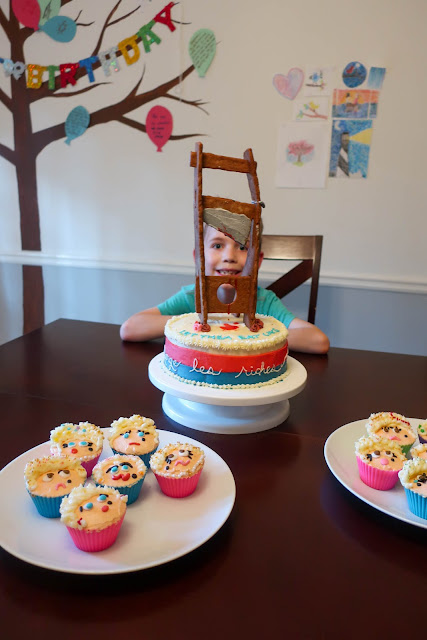 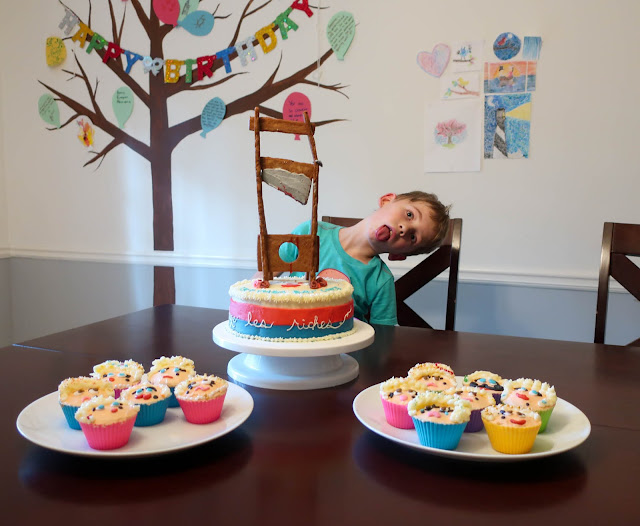 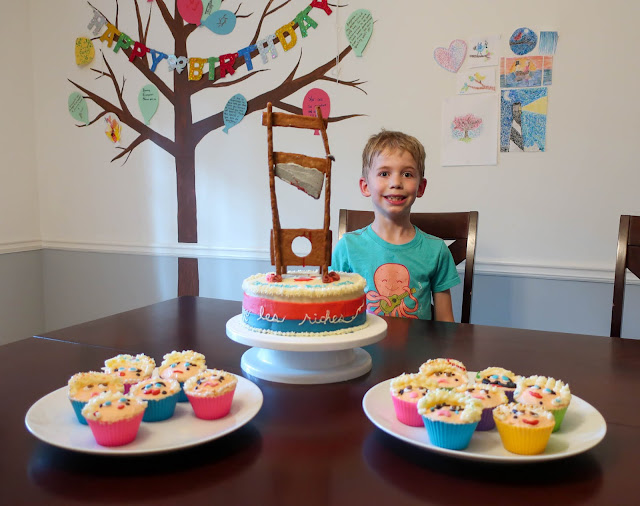 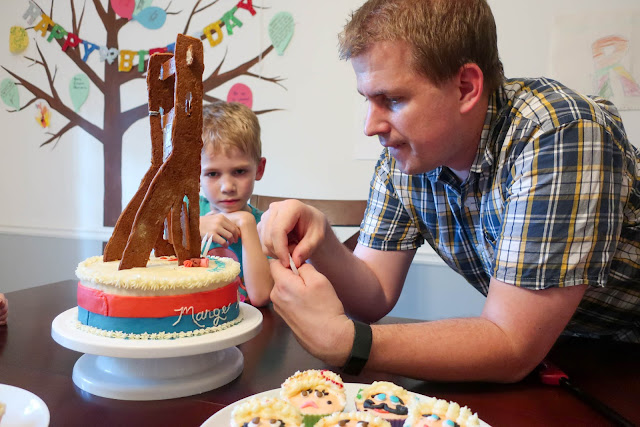 He was very excited for the fire: 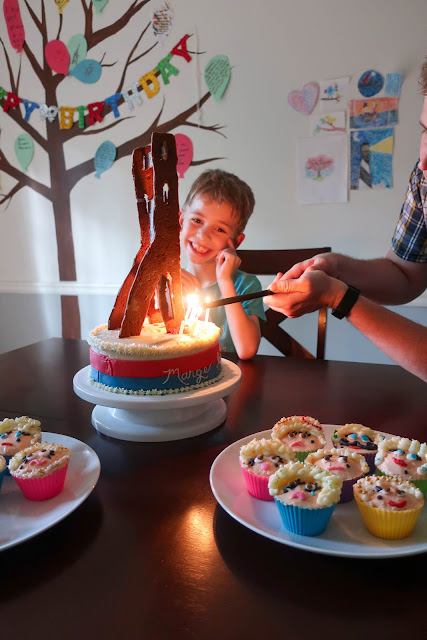 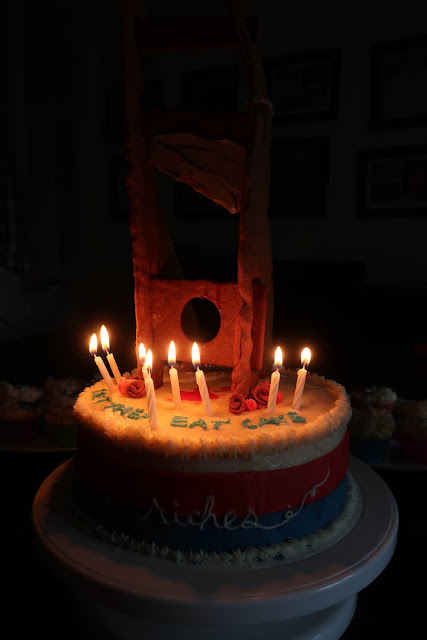 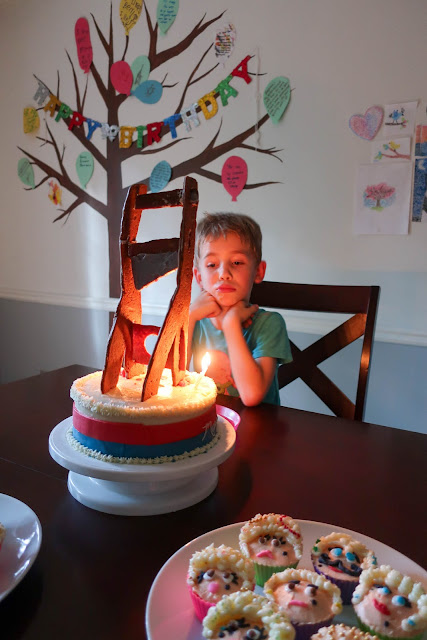 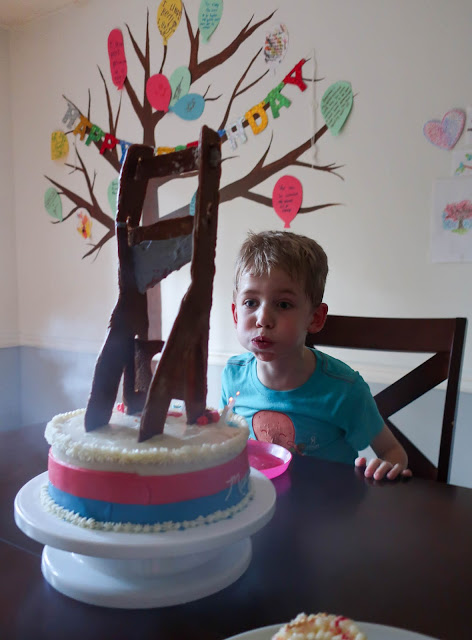 The cake was delicious and everyone enjoyed it, though Zoë liked the gingerbread best. She ate more than her fair share. I caught her back at the table eating scraps of gingerbread after everyone else had traipsed off to the family room for scripture and prayer.

We'd baked skewers into the stand so we could poke it into the cake to help it stand up and she was holding the skewer sideways and nibbling the gingerbread off it.

Benjamin was a little upset that she basically ate the entire guillotine, but we do have some gingerbread dough left in the fridge so I told him we can make more gingerbread later (not that we need more goodies in the house!) and he quickly forgave her and once again changed his attitude around.