Last night while the big kids were (at long last) finishing their Harry Potter movie marathon (which they started mid-May), I was reading stories to Alexander and Zoë when the sky turned red, drawing us all to the window, and then to the back deck. We stood and watched the sunset grow redder and redder, lighting up the sky behind the dark silhouettes of the trees. And as we were staring off into the woods we saw an elusive flash of light. Then another. And another.


We ran inside to grab our shoes (and a jar) so we could go hunt for fireflies. Alexander and Zoë were so excited to be outside as it was getting dark and they loved the fireflies. Alexander was so happy that he told me he felt like he was Daniel Tiger and then, quite in character for Daniel Tiger, he started making up a song on the spot. "Finding fireflies is so fun for our family!" he sang.

He sang a lot of things. But he wouldn't sing for the camera (the only song he'd sing for me when I had the camera on him was Daniel's bedtime song: "Bath time, brush teeth, pjs, story and song, and off to bed!" I suppose Alexander was also feeling a little sleepy.

We only caught three little fireflies last night, which was enough for the evening. 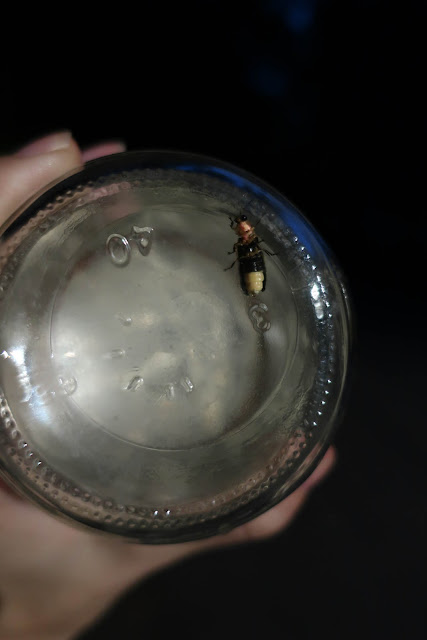 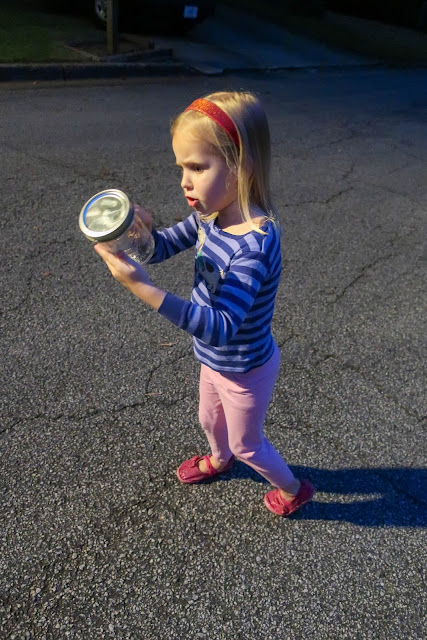 This is Zoë by "the fairy stump." There were a lot of fairies in this yard (no one lives here currently but some people are getting the house ready to sell). 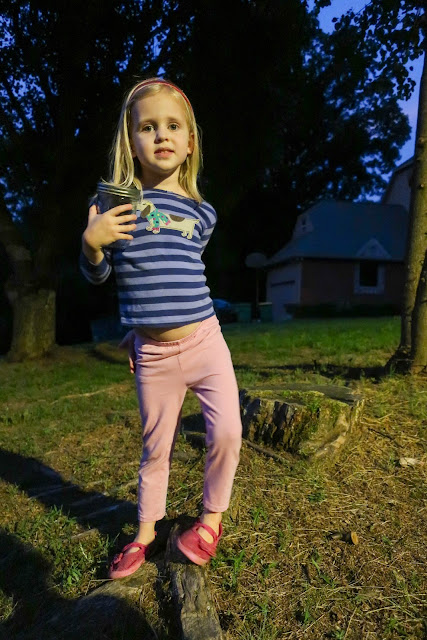 Tonight the kids were so excited about hunting for fireflies that we headed out a little before sunset to start looking for them. Our neighbour, Mr. Paul, told us that there had been a fawn in his yard all day and they'd just seen the mother deer come back for the sweet little thing. We didn't catch a glimpse of the fawn, but we're sure to see several fawns traipsing through our yard the next couple of months. We did, however, see a few bats and some bunnies hopping around.

Anyway, it was mostly Benjamin, Zoë and Alexander walking around the neighbourhood with me at first. We headed down a street that was a little darker than ours (due to the fact that it has more trees to create an even thicker canopy to blot out the sunlight even more effectively, which is mind-boggling considering how many trees we have on our street) and that was just the secret to finding our first few fireflies. 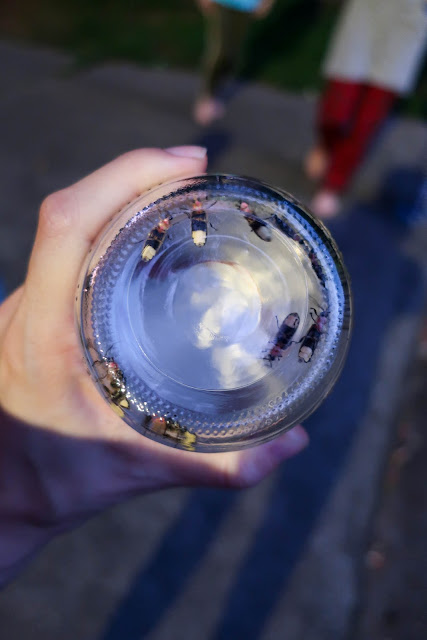 After we had about seven in our jar (Benjamin is very adept at catching fireflies) and the sun was beginning to set just so, we went back to the house to fetch our big sisters, who, upon seeing how many fireflies we'd managed to catch came out to join us in a firefly evening. 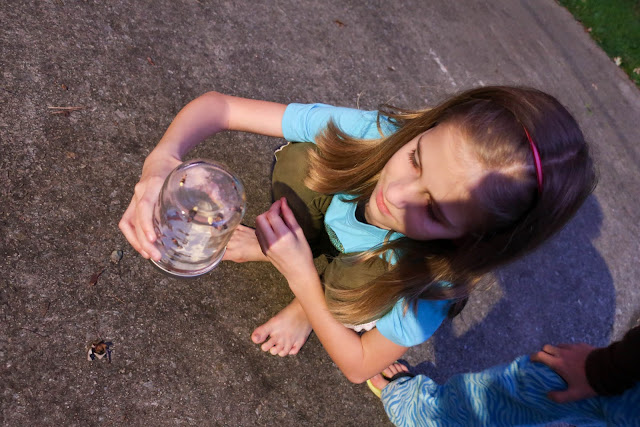 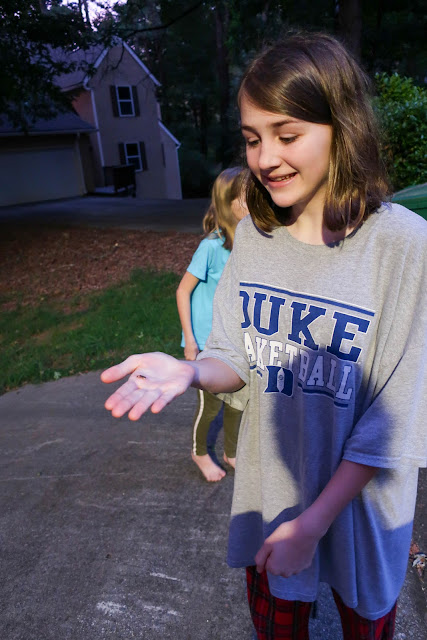 The kids immediately wanted to take them to "firefly city" (which is just the darker street) where they caught several more fireflies. All the big kids scrambled away, leaving me with Alexander. He and I slowly made our way to Firefly City (not far from the fairy stump, really) and when we were about halfway up our hill he turned around to look at the sunset and said sweetly, "Woot at bat bootiful fire-fie bunbet, Mom!" 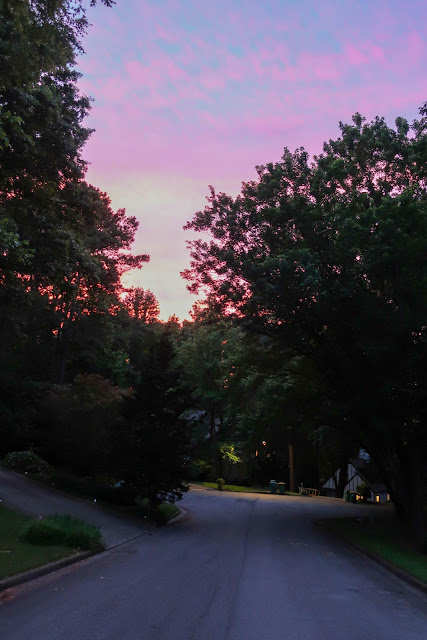 It was a rather stunning Firefly Sunset. 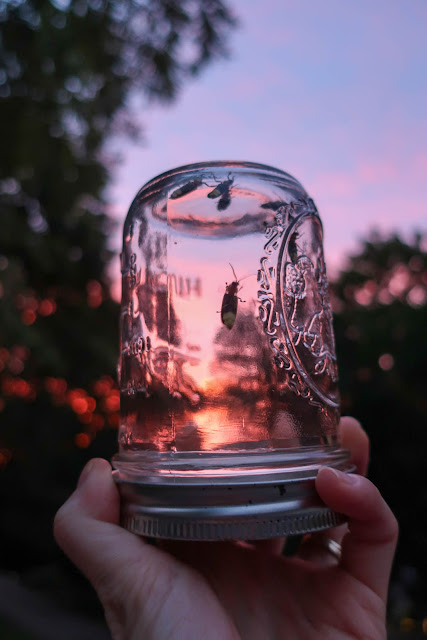 Here is my beautiful baby admiring our jar of fireflies with the beautiful firefly sunset behind him: 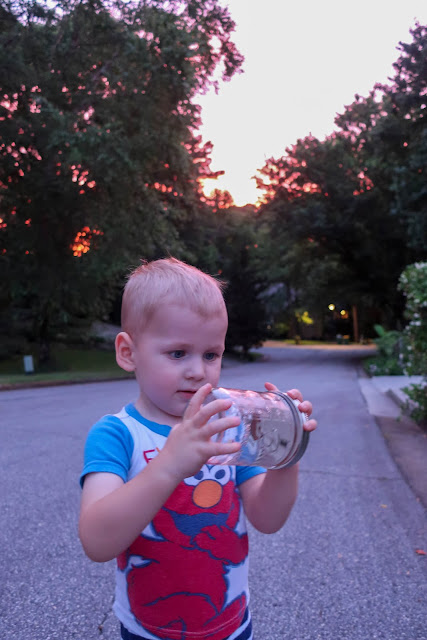 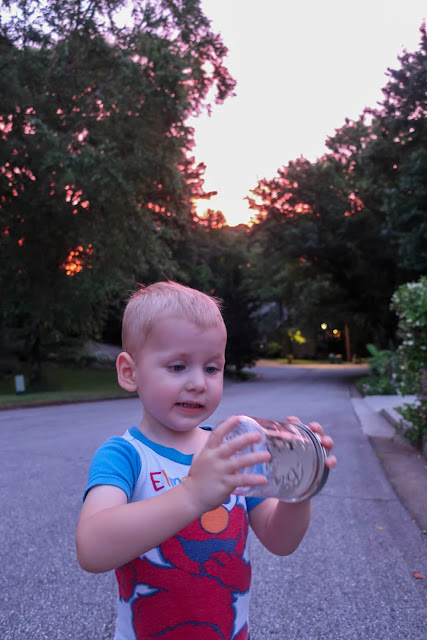 We've learned to hold the jar upside down because the fireflies seem to like to crawl to the top of the jar, no doubt looking for some way to fly away. If you hold the jar upside down you can watch them crawl around the top of the jar and it makes it easier to put new fireflies into the jar because you can just open the jar, stick your hand under it and the bug will fly up into the jar all on its own. 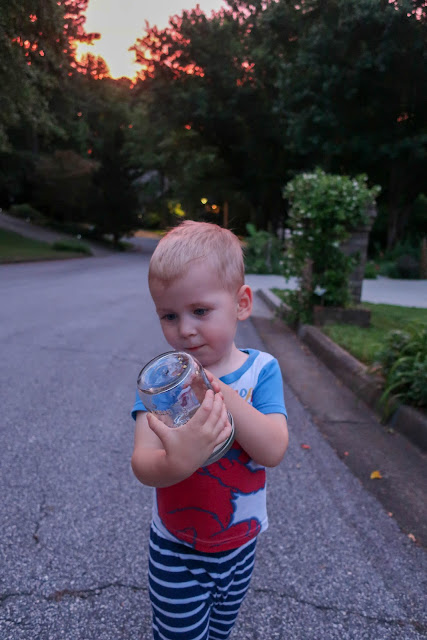 They don't light up very often once they're caught in the jar, which makes sense because a big reason they light up is to communicate (trying to find a mate) and there's no reason to do that when you're stuck in a small space with a million other fireflies (maybe?), but they will light up if they fall inside the jar, like they're sending out a mayday signal. Sometimes they'll fall off the top of the jar by themselves and sometimes they get a little shake....sorry fireflies. 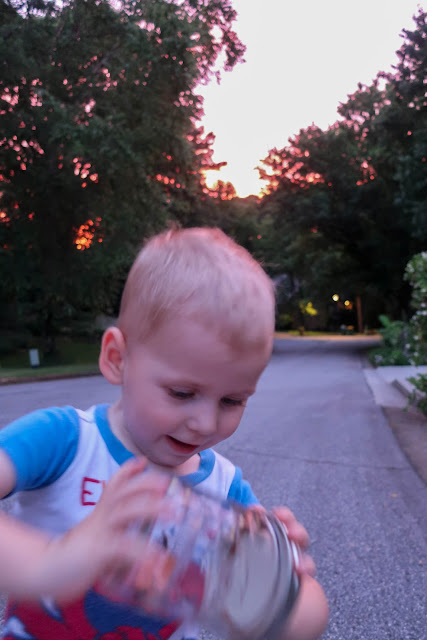 Here's a little neon-green flash I caught with the camera (the picture is horribly out of focus, but it's fine): 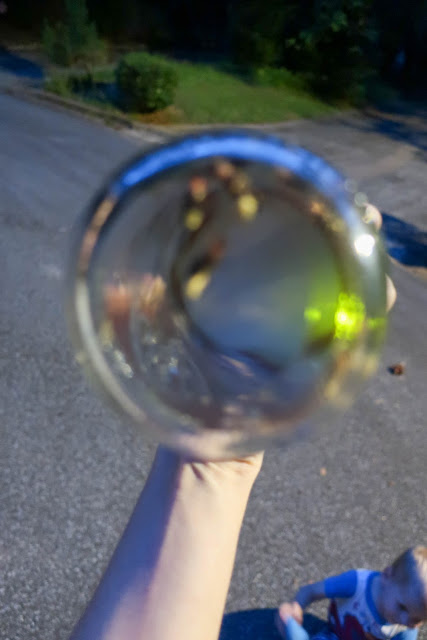 And here you can see kind of a lingering glow on one of the fireflies: 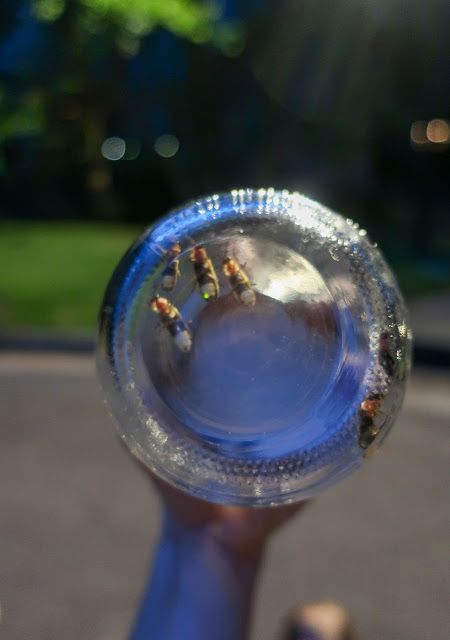 Benjamin was rather interested in knowing everything about fireflies. Why do they light up? Why are they only around in June and July? What do their babies look like? What do fireflies eat? 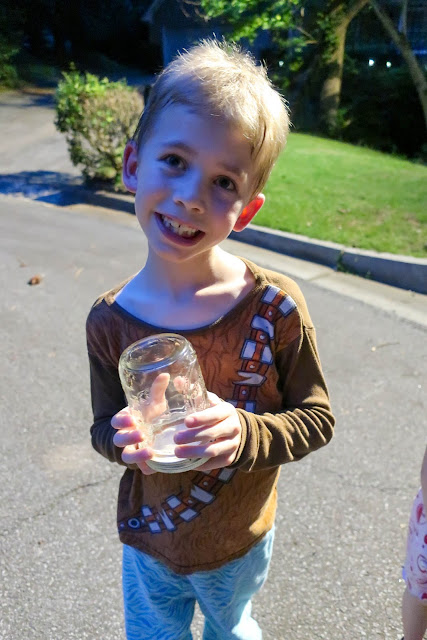 The answer to that last question was somewhat surprising for me because I would have figured they were vegetarian, harmless little bugs that they seem. But, no. They are carnivores, and not only that! They are largely cannibalistic! When they do eat, that is. Some species don't eat at all in their adult stage; their sole purpose in life is to reproduce and then they die (that part I knew). Benjamin was hoping we could plant something that would attract them to live in our yard. They do live in our yard, but our steep hill makes hunting fireflies hard so we're happy to roam around the neighbourhood a bit to do it instead! 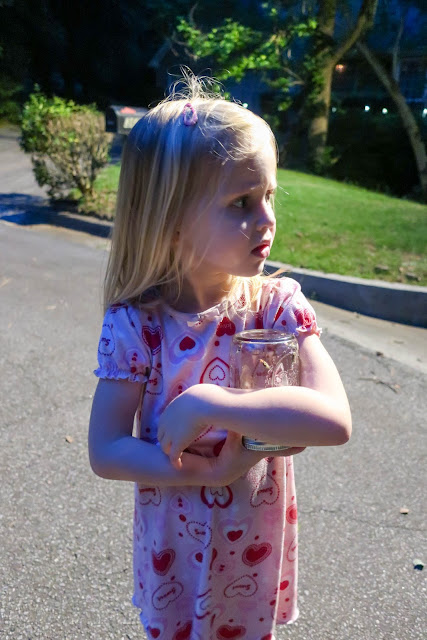 She likes chasing the fireflies and even touching them if she gets close enough but she doesn't really like holding onto them so she didn't manage to trap any this evening. Her favourite part is naming each one of the fireflies that we catch. She calls them her friends and had a hard time saying goodnight to them tonight. If you look closely you can see that one of the fireflies raised its flash for this photo (which is what my camera kept prompting me to do, but which I kept ignoring): 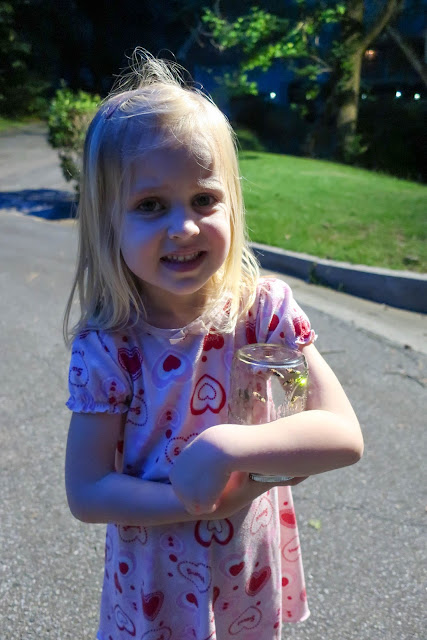 After we called it a night and took the lid off the jar, the fireflies all quickly flew away...except for this one: 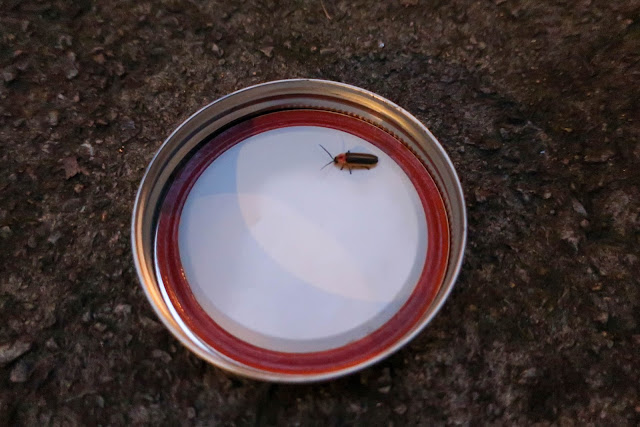 This one really took its time deciding to fly away. I felt like we needed a poem to sing to it, like we do for ladybugs. "Firefly, firefly, fly away home. Your tail is on fire so you'd better go!" Or perhaps, "Lightning bug, lightning bug, pants on fire, fly on up to the telephone wire!"

Eventually our relucant-to-leave guest opened its wing and flew, flashing, into the night.
Posted by Nancy at 11:21 PM