We are getting set to open our homeschool academic year very soon (Monday is the plan, actually), which feels very strange to me as I'm seeing my Canadian friends just barely posting their end-of-the-year pictures. But, honestly, our social life is pretty bland right now and we have no plans to do any sort of fun vacation this year, so I figure we may as well get a little bit of our formal learning out of the way. We're abandoning the school calendar this year, anyway, and are embracing a year-round calendar (which is something we've missed since we said goodbye to Easley Elementary School). Plus, I think it will be nice to have the kids into a routine and feeling comfortable with their new curriculum before I begin my classes (because I'm a little nervous about that).

Our math text books arrived a couple of weeks ago and the kids were rather excited about that. I just ordered our science curriculum (it's downloadable, though, so its delivery is fairly instantaneous). Various novels have been trickling in. We just built frames for and hung up our maps (finally). I reorganized our kitchen cupboards and reclaimed an entire cabinet in the dining room for our homeschool stuff. And when our new notebooks arrived, you should have heard the children squealing with joy—so many colours, so many ruling options (wide-ruled, college-ruled, primer-ruled), so much bliss!

Zoë was thrilled with her new notebooks and was sure that her very first assignment will be the writing prompt featured on the front of her notebook. She wanted to practice writing the way she would for her notebook but she didn't want to write in her notebook because she wanted to keep it clean and fresh for kindergarten. So instead she got out some scrap paper and copied the writing verbatim and then drew a picture of a house next to it (it's a picture of Benjamin, in case you can't tell). 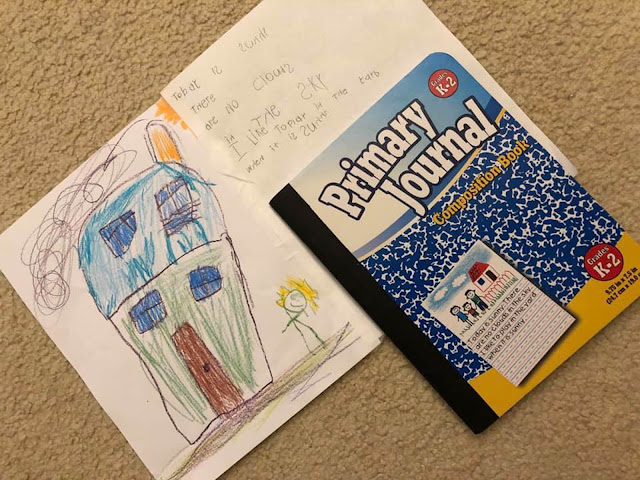 She writes a lot of things from her own brain as well, but I thought it was cute that she thought she would need to write the exact thing that's on the cover of her notebook.


People often wonder if their rising kindergartener is ready for school. Benjamin was probably my least-prepared child (but only because he didn't give two figs about the alphabet and would fight me on whether it was jk- or kj-lmnop) but he quickly (but with much work at home (teaching him to read phonetically (and abandoning the way his classroom was "learning" to read) was absolutely the right call for him)) got caught up to where he was supposed to be and grade one was a breeze for him. I never had any question that Rachel was ready for kindergarten (even though she entered kindergarten largely unable to read she at least knew her alphabet). Miriam, obviously, I knew was ready for kindergarten before she was old enough to attend kindergarten (so we did that whole moving her up a grade thing). Zoë, likewise, would probably find herself bored to tears in a kindergarten classroom.

She likes reading a lot. 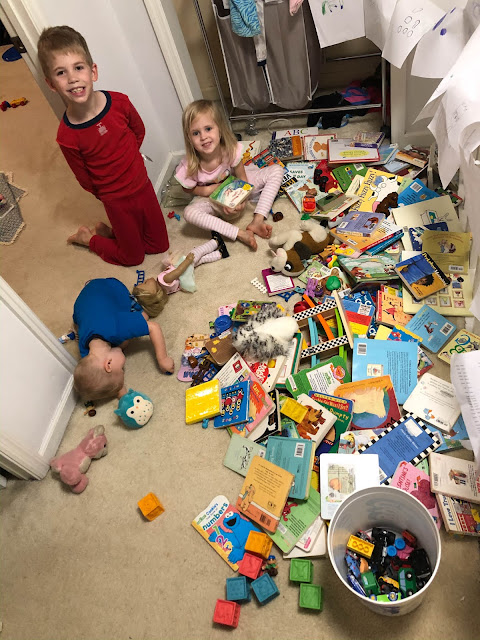 That picture is actually the ruins of a book castle the kids had built (my children will build with absolutely anything), but it's honestly not unusual for them to have that many books out to read, either. (Honestly, Benjamin is the only child in my house who has ever been obsessed with dumping out toy boxes; I thought he would grow out of it but he hasn't. Zoë and Alexander will get out the toys they want and leave the rest tucked away. Benjamin dumps out everything, always, which confused (and infuriated) me until I learned about object permanence and ADHD (which I'm fairly certain Benjamin has, but which remains undiagnosed); he has to see everything that we have otherwise he doesn't know what he wants to play with/read/whatever. Anyway, he was definitely the ringleader of this little mess (and, yes, that is a little mess at our house (sigh))).

Now, I haven't tested Zoë's reading level, per se, but I did an informal test with her today while she was reading Dinosaurs Before Dark (the first book in the Magic Treehouse series) where you count the number of words you have trouble with on any given page and if you have trouble with more than five words on a page then it's possible the book might be too difficult for you to read (though in my opinion that doesn't necessarily mean that you shouldn't read it). Anyway, she read four chapters out loud today (one to Andrew, three to me) and I counted words she struggled with on each page and I never got to five words. And she was so cute reading!

At one point Annie, one of the protagonists of the series, said, "Ahhhh!" and Zoë read it as if Annie was sighing but when she realized that Annie was actually in peril she went back and read it like a scream. And...it's just fun to listen to her read.

Anyway, Dinosaurs Before Dark is classified as "level M," which is end-of-second/beginning-of-third grade reading level. Somewhere thereabouts. I don't say that to brag, necessarily, although I am pretty proud of her, but to state clearly that she is without a shadow of a doubt on target for kindergarten readiness.

We still have some things to work on, like knowing exactly when to stop drawing unicorn legs and things like that (typically we stop at four, but it's a mythological creature so who's to say it can't have more than four legs?): 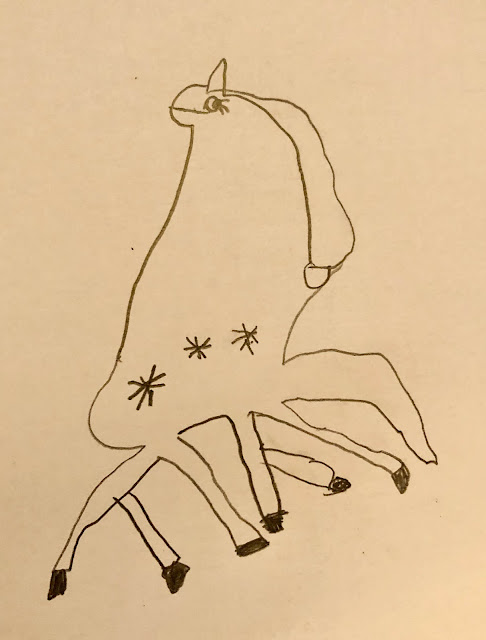 And I have been happy to learn that not all boys are like Benjamin. Not that there's anything wrong with Benjamins. Benjamins are great. They are clever and funny and kind. But raising Benjamins has proven to be a challenge in more ways than one. We love our Benjamin, we do, but convincing him that the alphabet was really the order that it was took me months. He absolutely never sits still and sproings around all over the place, constantly. And it's just so hard for me to understand the way he thinks.

I never posted about this on the blog (for reasons that will be evident in a minute, though I did manage to get it up on Facebook), but here are a few pictures of the "reading lesson" I did with Benjamin on Friday, October 13, 2017 (when I was in the very early stages of labour with Alexander). At the beginning of that school year we had begun trying reading lessons on the couch, but it was torture for the poor boy (kind of like letter flashcards (required practice for kindergarten, I'm sad to report); I quickly abandoned those and had him hop around on an alphabet floor mat/puzzle instead) so we took to the floor where he could freely do...whatever...without bouncing me on the couch (which was getting rather uncomfortable, what with the baby bouncing inside of me and Benjamin bouncing outside of me). Here he is kneeling down: 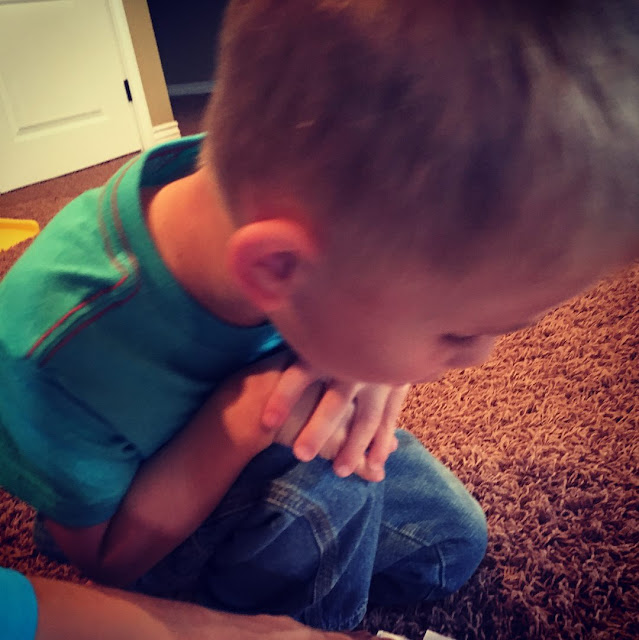 And here he is doing upward dog: 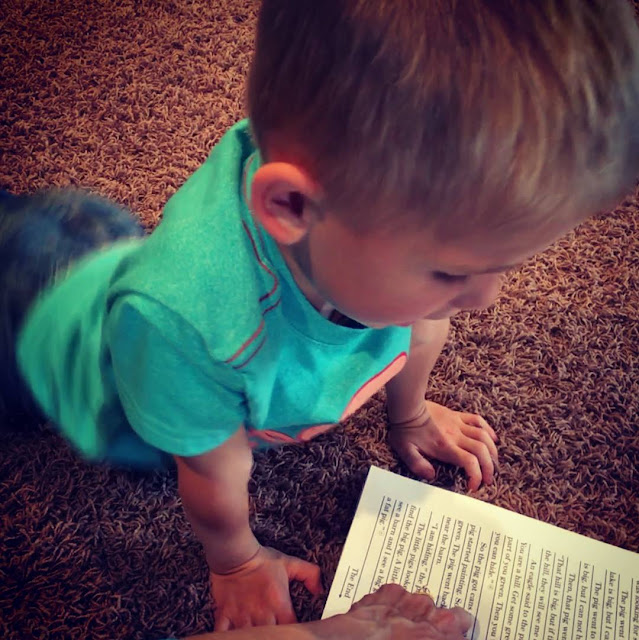 And here he is in downward dog: 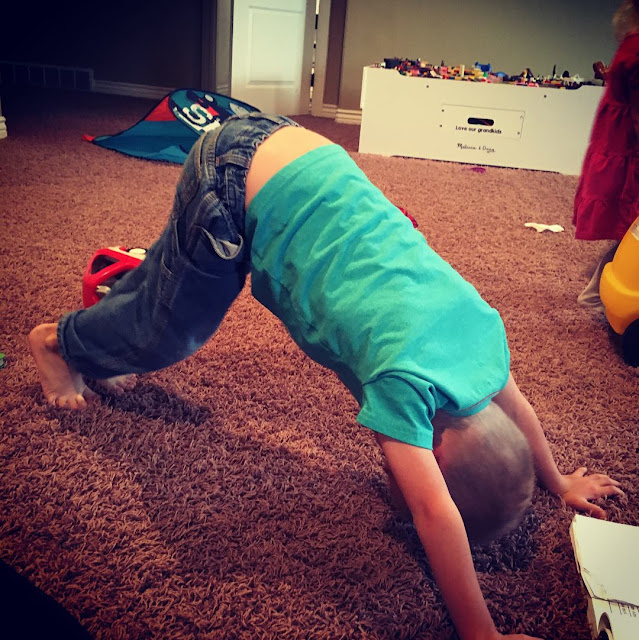 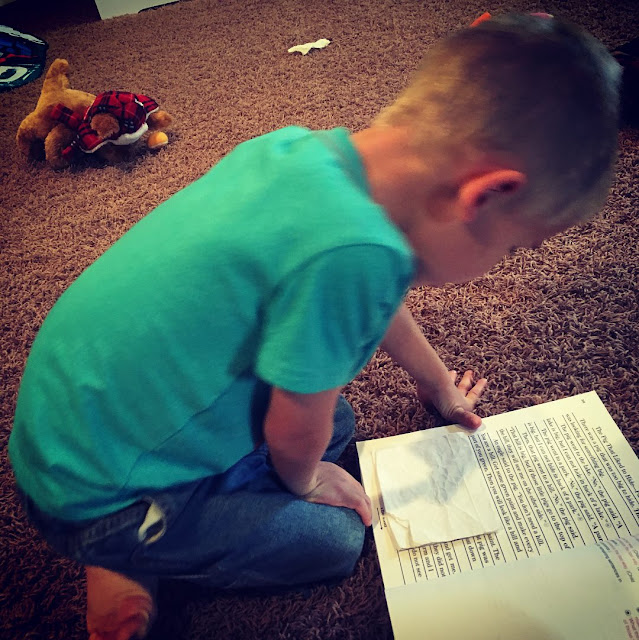 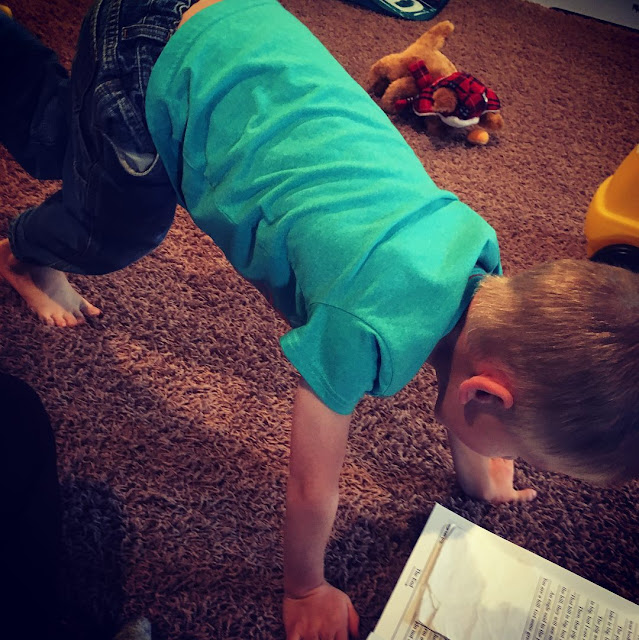 And we just kind of rotated around in a circle, twisting the book around to match whatever direction his head was facing while he did all the moving that he needed to do. And he learned how to read! We finished his reading lessons a couple of days later and from then on kindergarten was (relatively) smooth-sailing.

Teaching him is still a challenge for me because he thinks so differently than I do. I have to get very creative to even conceive how to reach his mind sometimes. For his part, I imagine that learning can be frustrating because he simply doesn't fit the traditional learning model (and that's one big reason we're schooling at home, where he can roll around on the floor while he does his math, rather than be forced to sit in a desk all day (which is not good for this particular child (or any child, really, but definitely this child)). Anyway, Alexander is a little more traditional in that he seems to care about the alphabet at the tender age of two. Rather than shrug his shoulders and run off when I ask him alphabet questions, he wants to know more. He knows "his" letter is A. He knows Zoë's letter is Z. And the other day he was so, so proud to have drawn this "big, big D!" It looks like a P to me, but I can agree to disagree. "Woot at mine bid, bid D!" he proudly demanded. 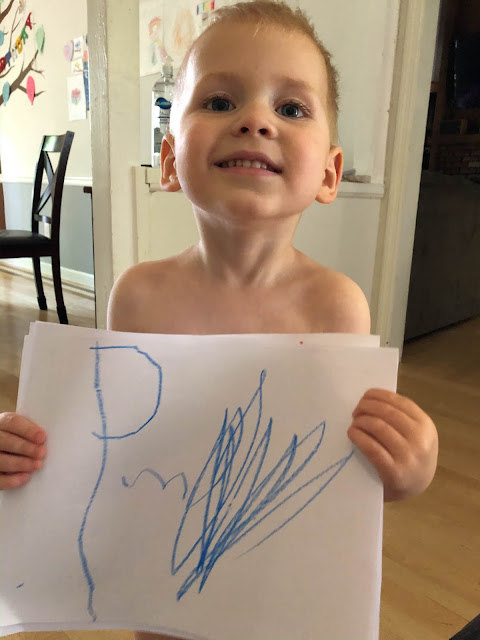 Anyway, all this rambling is to say that (A) we are starting up our homeschool soon, (B) Zoë is well on-target for kindergarten readiness, (C) children learn in different ways and the ones who seem to learn easier aren't smarter than the others; they simply fit the learning model of their classrooms better, and (D) as a parent/teacher it is more exhausting trying to figure out learning styles that are a little bit off the beaten path (but it's so, so important).
Posted by Nancy at 11:40 AM