As I mentioned, we've had some wonderful summer storms roll in (we're supposed to be seeing a Saharan dust storm but haven't really noticed if it's hit us or not because of all the rain we've been getting) and they've been knocking the power out quite regularly.

On Friday it was clearing up a bit so I told the kids we'd go play outside really quick before it stormed again, but as we were lugging our bikes out of the garage the storm clouds gathered together, blocked out the sun, and started throwing a temper tantrum. So we put our bikes away and sought shelter inside.

"I'm going to start making dinner right now," Andrew said, even though it was a little early. "I'm just afraid the power's going to go..." 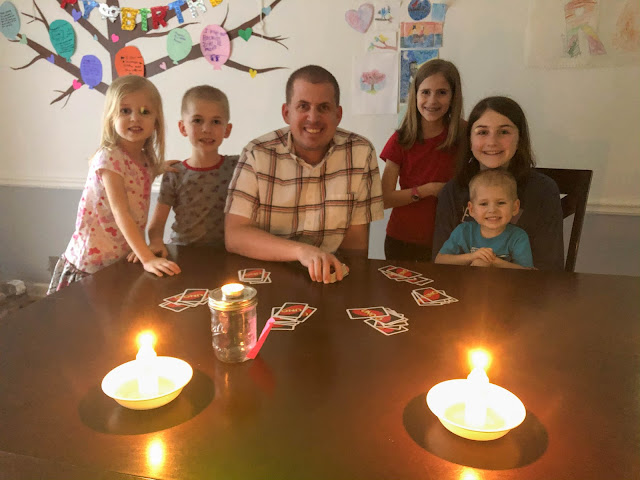 Eventually Andrew went out and got McDonald's for dinner because we didn't want to open our fridge (since we had no estimate of when the power would come back on) and no method of cooking, really (since all our appliances are electric and the grill was outside in the rain) and no one felt like having crackers and canned fruit for dinner. So he picked up some burgers and I cut up a cantaloupe we had sitting on our counter and we had a lovely candlelit McDonald's dinner. For dessert we roasted mini-marshmallows over the candle flames on toothpicks, which the kids really enjoyed.

Alexander was afraid to hold his marshmallow over the flame at first, so he asked me to hold his hand ("Daniel Tiger says, 'When something is new holding a hand can help you!'"). 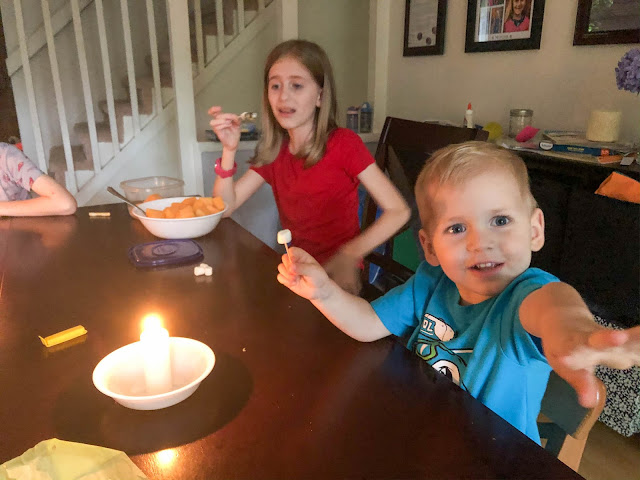 He quickly gained confidence (and I have a million pictures of him (and not so many of the other kids) because I was watching him rather closely). 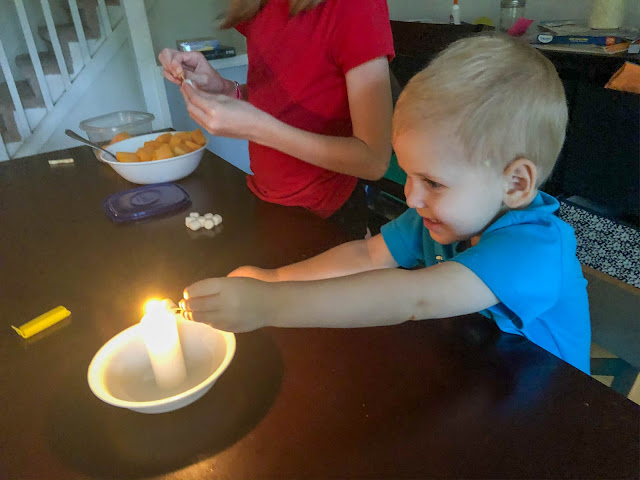 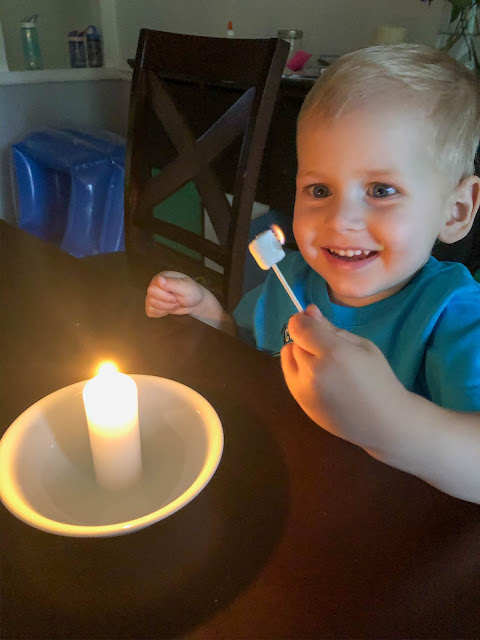 He didn't end up burning his fingers, nor did he burn anything down. The most annoying thing he did was snuff out the candle a handful of times. He kept putting the marshmallow directly on the wick and...poof. I went through so many matches trying to keep his candle lit! 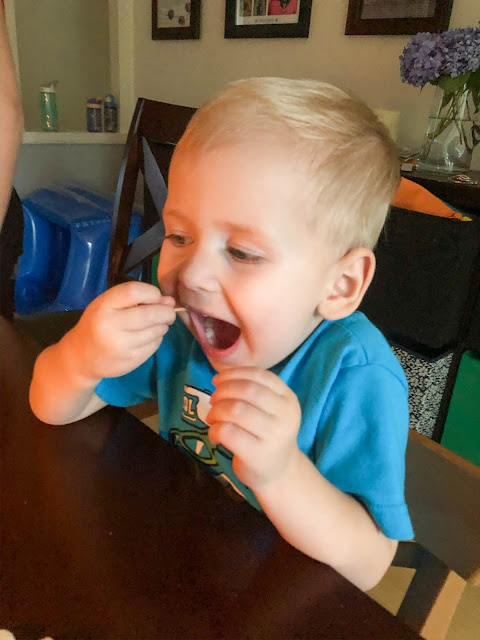 It made the power outage feel a lot less scary for Alexander. He really enjoyed those marshmallows. 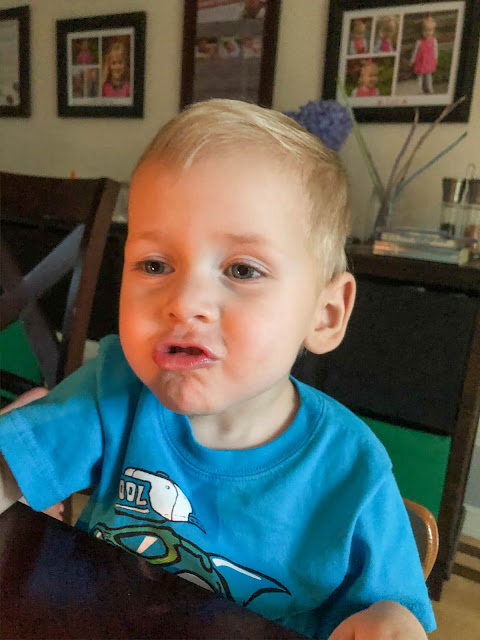 I should mention that we do have flashlights, but they are forever going missing (we find them when we clean out under beds and couches; they are often "borrowed" when the kids build forts but they never seem to find their way back to their "places") and we wanted to reserve our phone batteries (and the flashlight function on our phones) for bedtime in case the power didn't come back on. It's much safer to use candles at the dinner table than it is to use candles in bedrooms! 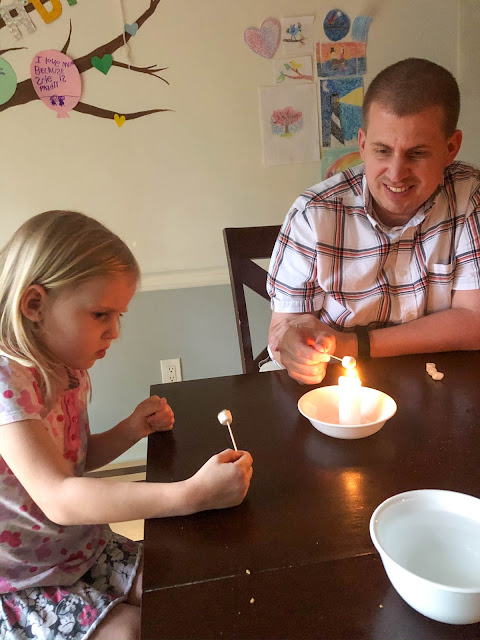 Not many pictures of her because she was sitting beside me, where I could so easily ignore her while I focused on Alexander. She had Daddy to help her so I wasn't worried about her. 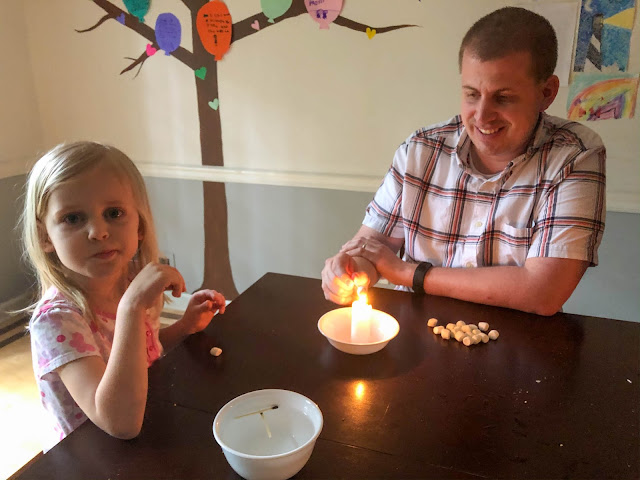 Benjamin was a bit of a concern: 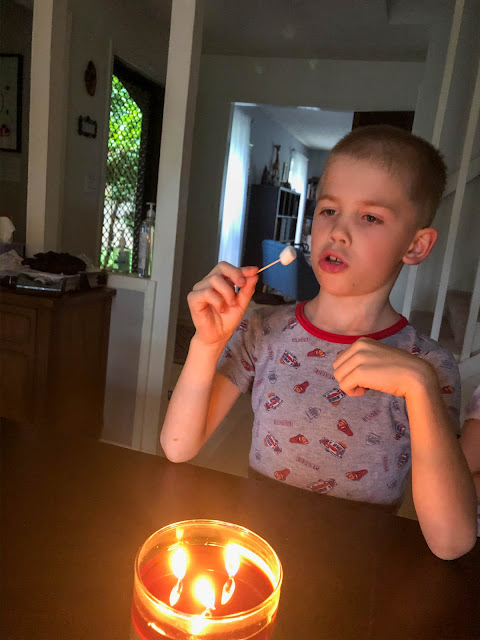 His most frequent question over marshmallow roasting was, "Can we burn _______?" and our never-ending refrain was, "No." 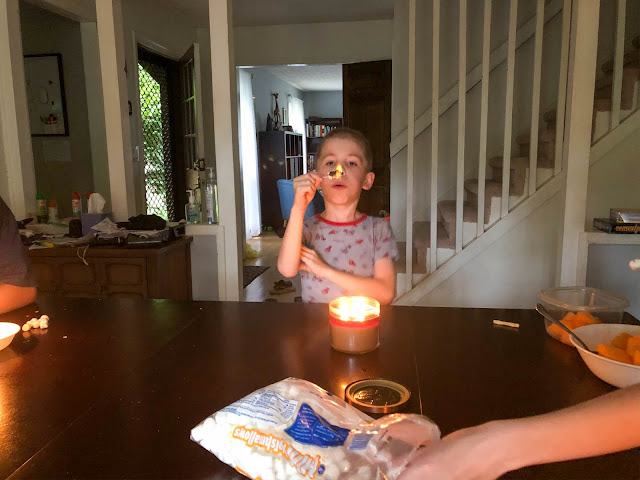 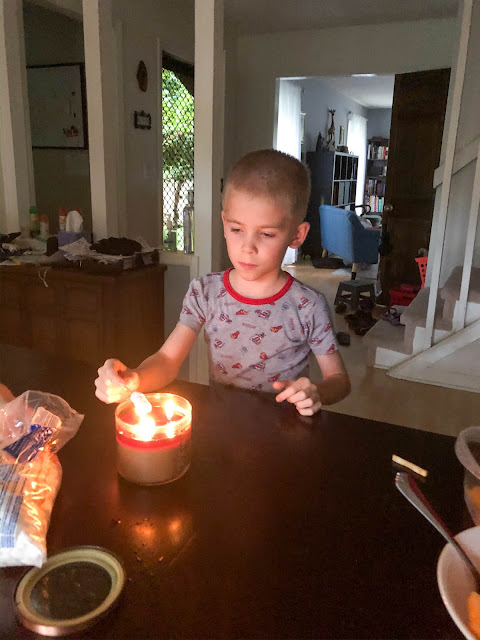 Miriam had a fun time with marshmallows as well: 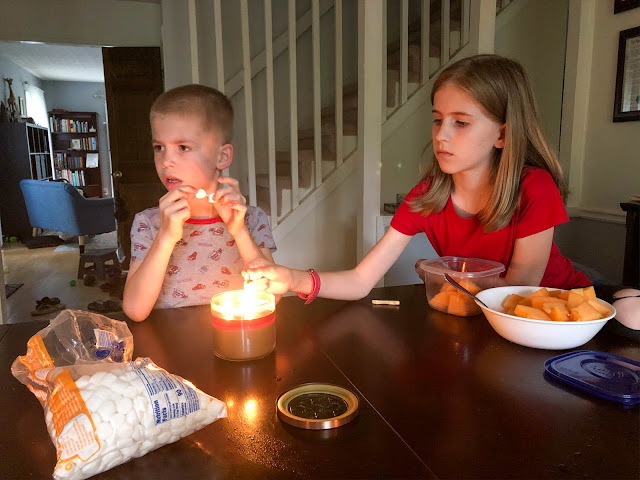 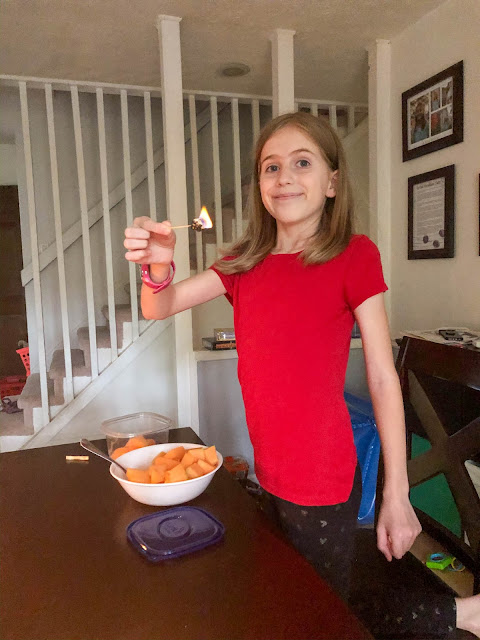 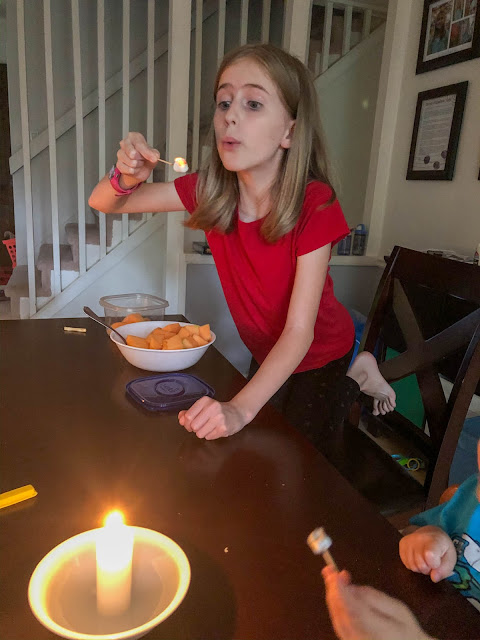 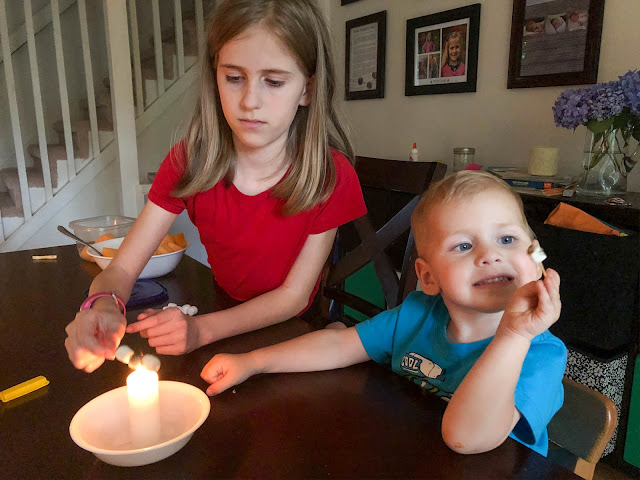 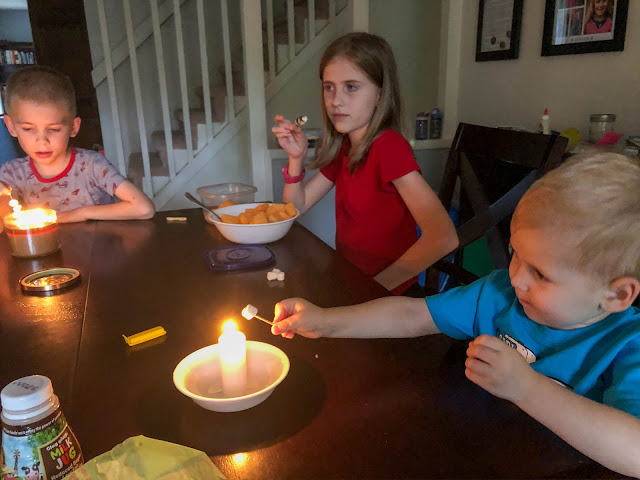 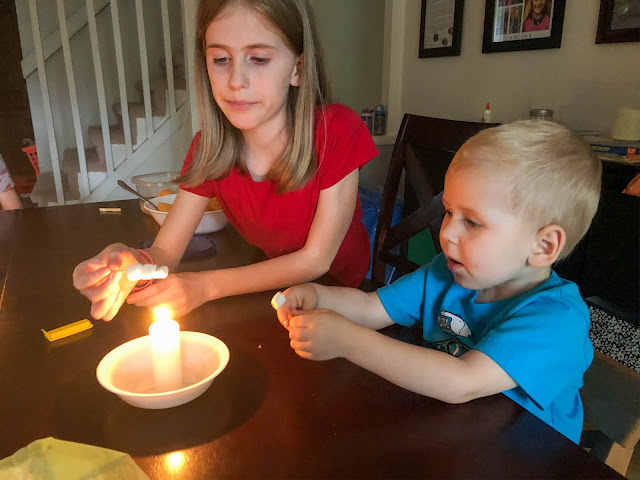 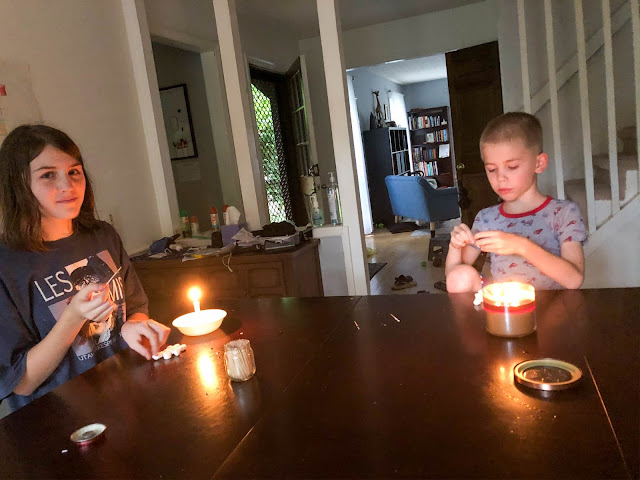 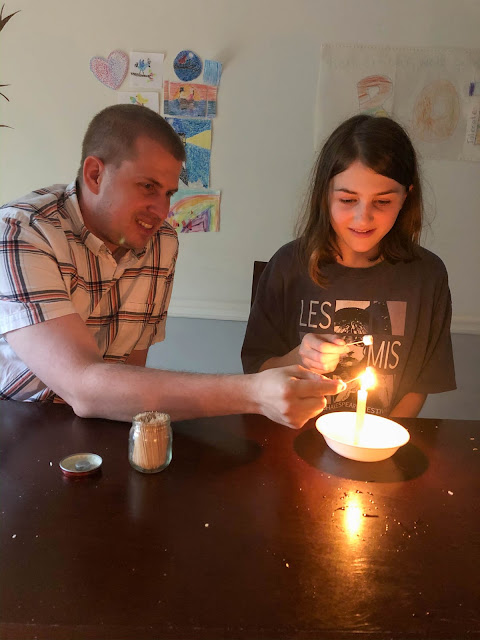 And here's Andrew setting a terrible example for the children: 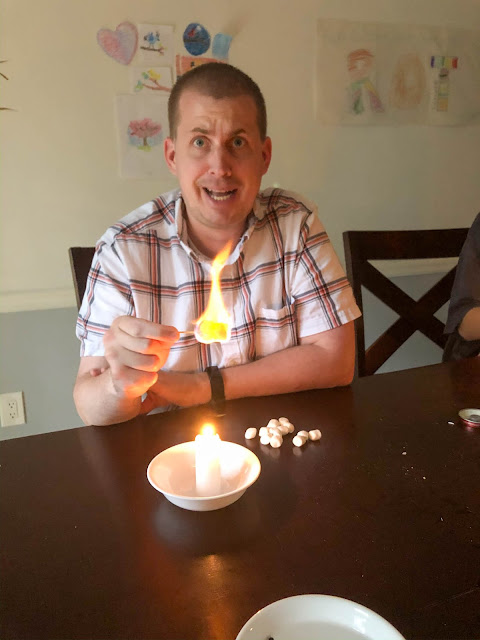 And here he is using a marshmallow inferno to roast another marshmallow: 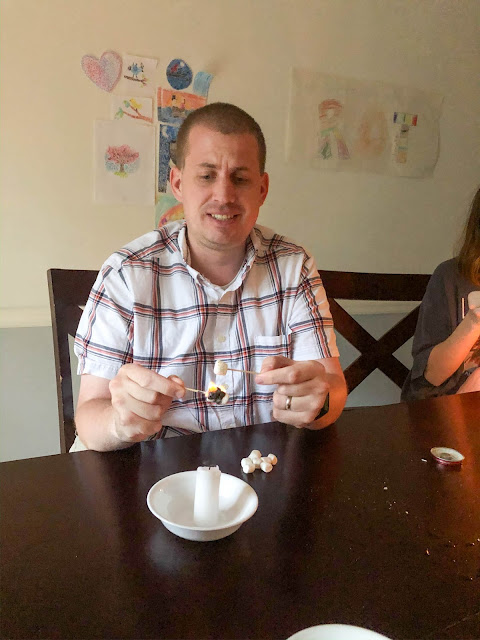 While Daddy was off getting McDonalds (with Zoë and Alexander, so they could get a break from being stuck in our scary, scary "power outage" home), Benjamin made a "thunder fort" and read with a flashlight, and Rachel and Miriam wrote their little COVID Quarantine parody. 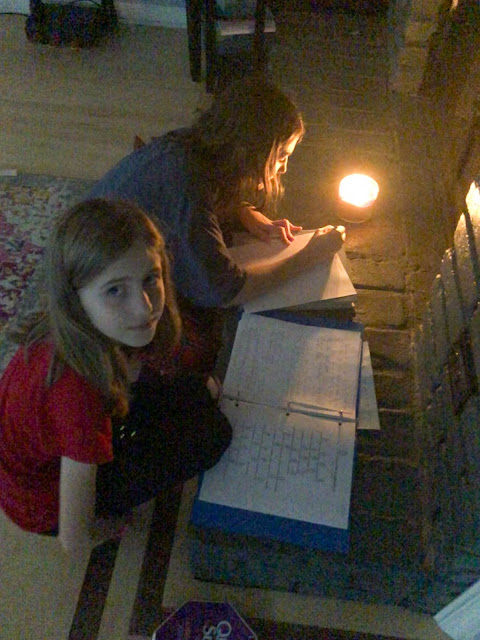 Later, after we had gone for a walk (because the storm had passed) and had gotten the little kids to sleep in their dark, dark bedroom(s), we gathered at the table to play a couple rounds of hand and foot. Rachel and Miriam liked that we each got our own personal candle. They felt rather Victorian, like they were in the story Dracula or something. 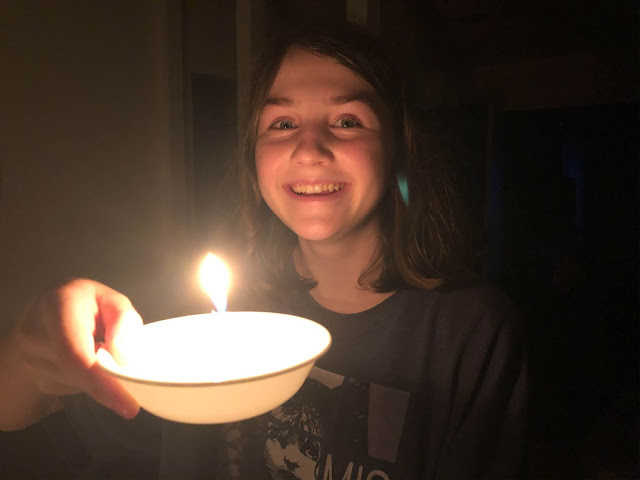 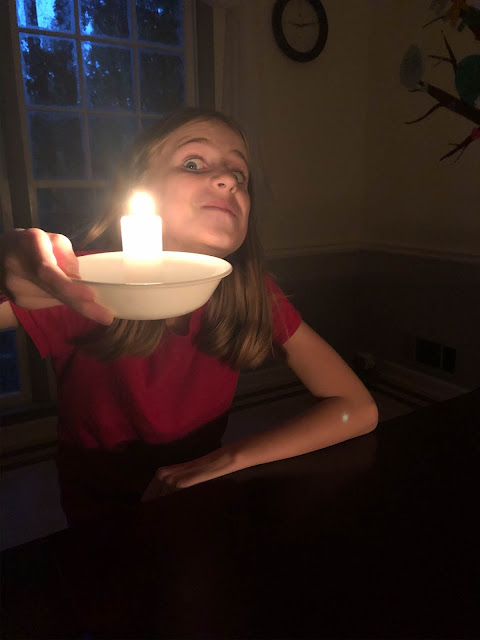 The girls asked Andrew for an update on our power situation and he said that the power company still had no estimate for when our power would be restored. The last time they had updated the website was at 5:30 and all they say is that they are "assessing the situation."

"Left in the dark," Rachel interjected. "Both literally and figuratively."

So we played a couple rounds of "hand and foot," as I mentioned, letting the girls stay up far too late. 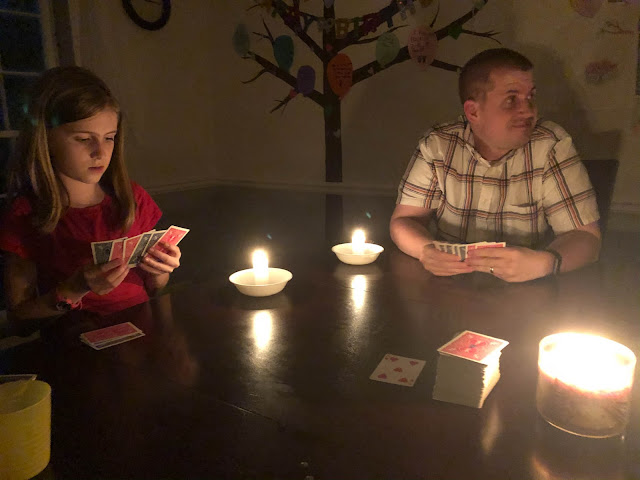 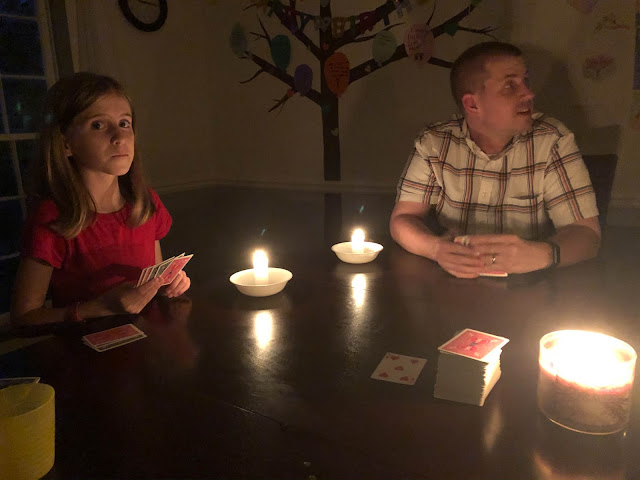 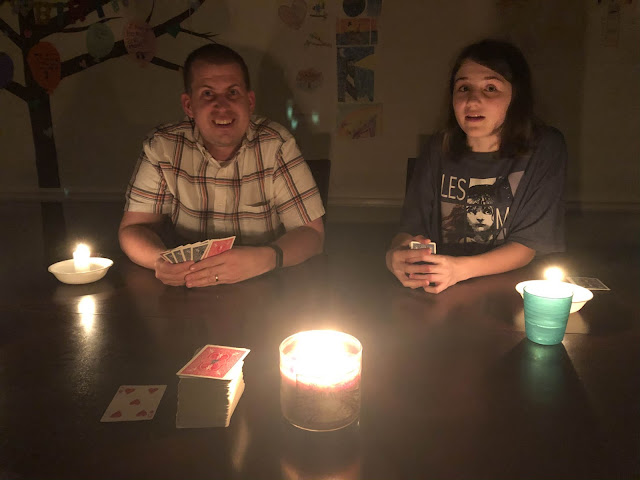 We saved the last two rounds of "hand and foot" for the morning (it's a long game). By the time we sent the girls to bed we finally had an estimate for when our power would be restored: 4:30 PM the next day. Twenty-four hours after the power went out, which made me rather concerned for our fridge food. Freezers can typically last 48 hours without power (if you keep the doors closed the whole time and your freezer, like ours, is jam-packed), but fridge food is only supposed to last four hours (which...I guess we should have looked up earlier because our power was out for eight hours and we have felt the contents of our fridge have been fine...but now I'm worrying about it (that said, I don't think eggs and cheese and produce are really going to "turn" in just four hours so I don't think I need to worry about those items as much as the leftovers...which we've already been eating for lunches and things the past couple of days; we're probably fine))).

The girls were too afraid to go to bed in the deep, dark basement, so they tucked themselves in on the couch upstairs and Andrew and I read while they fell asleep. 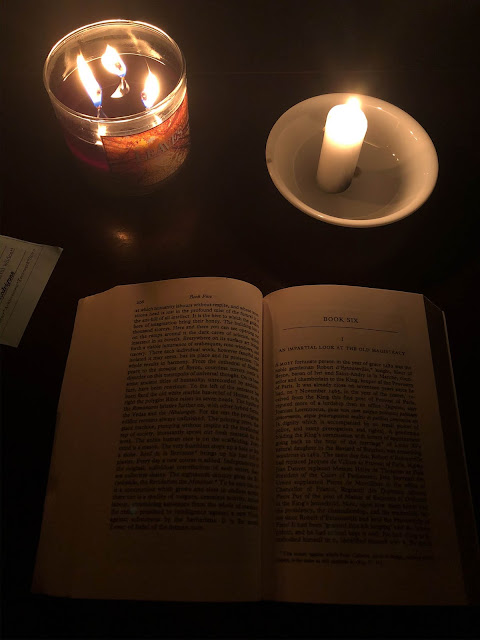 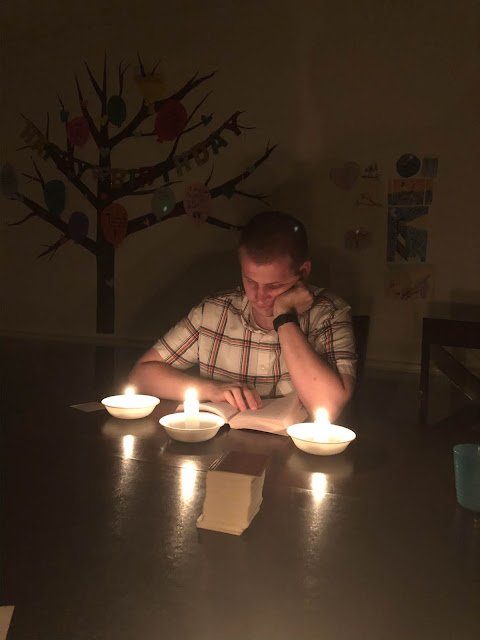 Soon we, too, went up to bed. We brushed our teeth by the light of our phones and when we stepped out of the bathroom, Andrew pointed to the closet.

"The closet light is on," he said.

"Let's go turn off all the lights, I guess," Andrew said, now noting the light filtering beneath our bedroom door. So we went through the house and turned off all the lights and then, ironically, felt our way back upstairs in pitch blackness because in our excitement to have the power back on we left our flashlight/phones upstairs. The last light we turned off was one on a special dimmer switch. You push the button and the light slowly fades on; push it again and the lights slowly fade off. In all honesty, I find them rather annoying, but that's only because I can't stand dimmer lights.

Lights buzz more when they're dimmed. My kids are forever dimming the lights (you can set the light to stay at whichever brightness you choose and my kids think it is interesting to have the lights be dim) and it drives me insane because of the extra buzzing. Anyway...

We hit the switch and then walked away, into the middle of the room, as the light faded out, plunging us into darkness again. It was rather funny. I just wandered ahead until I found the switch at the bottom of the stairs. You'd think that after being without power for so long (ooooh, eight hours) we'd at least equip ourselves with flashlights!

Anyway, that was our little power-outage adventure.

As we were going to bed I remarked that it was strange to think that our not-too-distant ancestors weren't ever concerned about losing power because they didn't have power. We're so dependent on it now and feel hard done by if we have to go a few hours without it.

It's true. We're remarkably blessed and we take far too much for granted.
Posted by Nancy at 11:55 AM