We have had a cool summer so far, which we're rather glad about since our air conditioner is broken. The transformer blew, I guess. We're waiting on our home warranty to decide how they want to fix it (cross your fingers they will decide soon because I don't know how long the cool weather will last). Today has been rather chilly and rainy so I'm fine upstairs right now, but when the days are leaning toward hot and humid (not that we've had many very hot days yet this year) things get pretty hot upstairs rather fast.
We've been joking that each level of the house is in its own biome: polar in the basement, subtropical on the main level, and tropical upstairs. One day it was 75°F on the main level and 85°F on the top floor. That heat felt rather heavy. Today they're about the same temperature, though.
Here's a look outside today on this wet and rainy day: 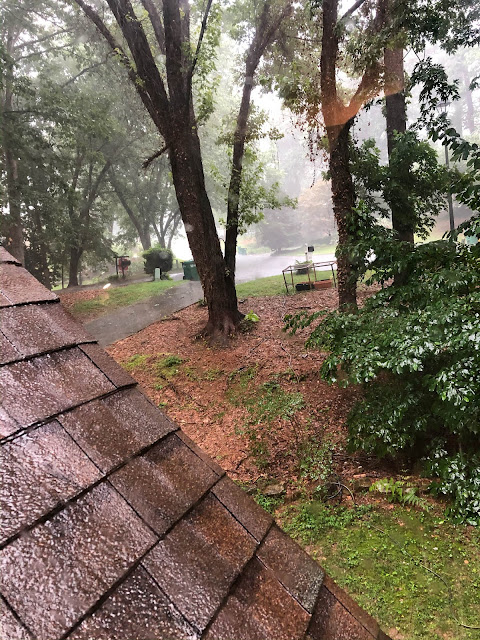 Things cleared up around dinnertime, so when Benjamin and Zoë were finished with their dinner we sent them outside to play in the puddles until everyone else was ready to go for a walk. They both took these instructions quite literally. Zoë put on the rain boots Auntie Kelli sent for her birthday and stomped in the puddles to her heart's delight. Benjamin...well...we came outside and he had completely blissed out on our front swamp lawn: 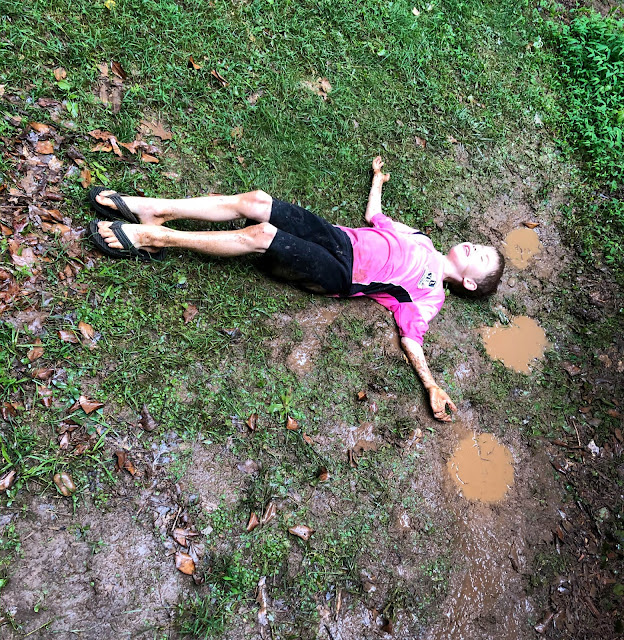 He was literally covered in mud from head to toe: 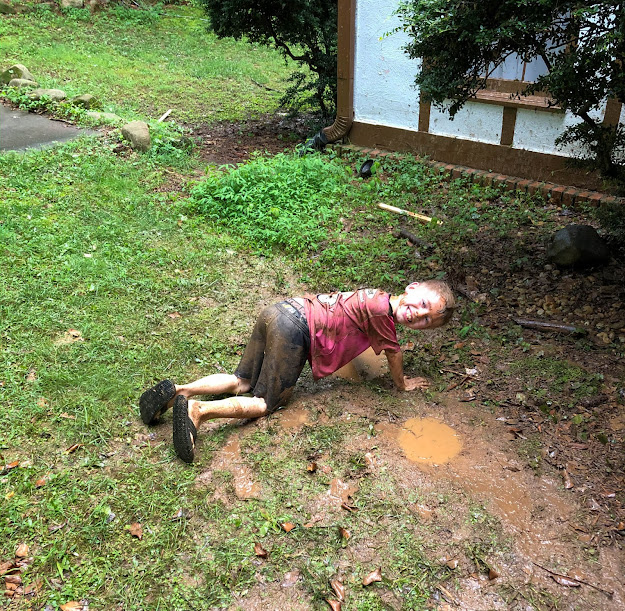 He decided he wanted to get his head wet and nobody stopped him because it's not like he could get very much muddier than he already was. So he stuck his head into one of the little mud puddles (that I have a sneaking suspicion he dug out himself): 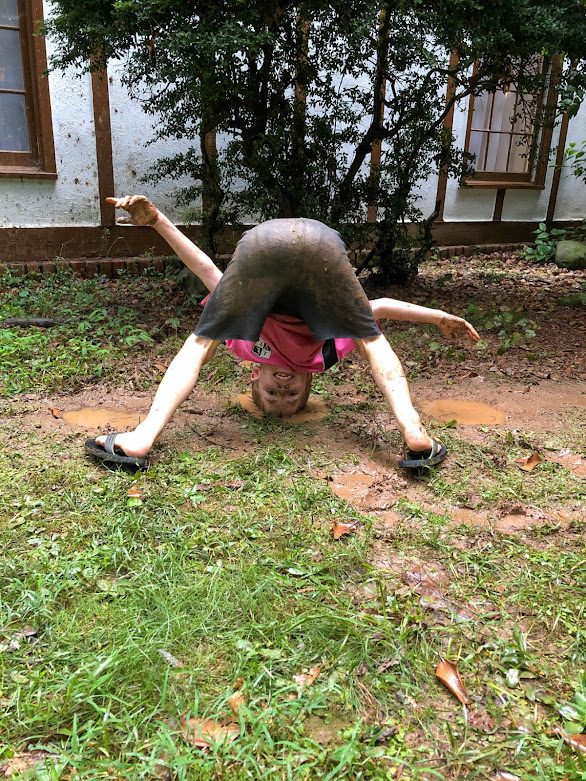 He reminded me quite a bit of his little two-year-old self on a family vacation to Palmyra in the summer of 2014: 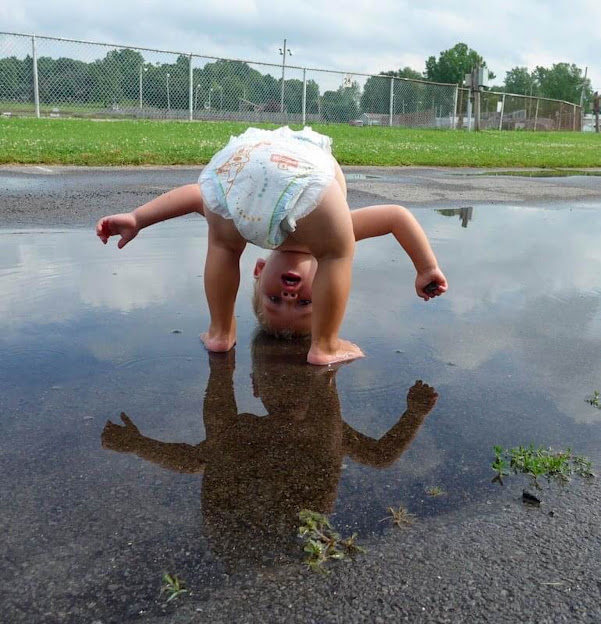 Some habits die hard, I guess. 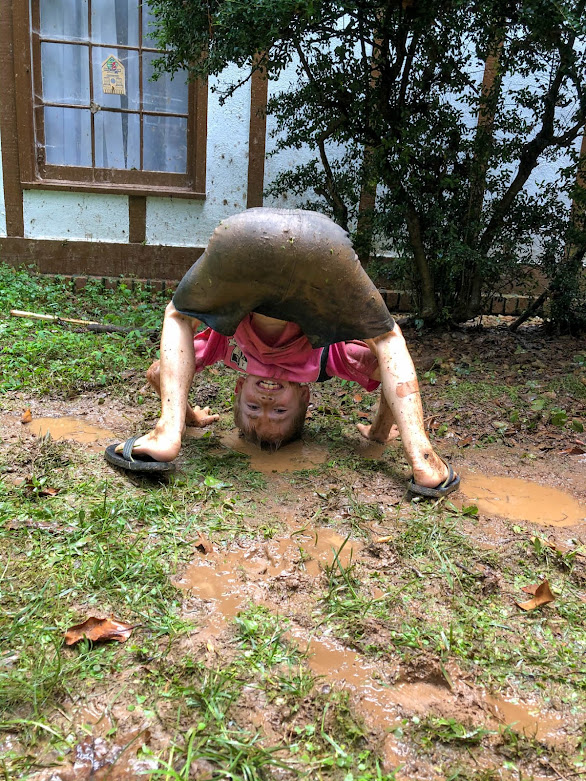 It ended up being a lovely day for Benjamin to do this because for FHE I had planned to have the kids listen to Elder Allen D. Haynie's General Conference talk from October 2015 (as an extension to what we'd talked about yesterday during our "church time"). Instead of simply listening to Elder Haynie's talk, however, Benjamin lived it!
Here's an excerpt from Elder Haynie's talk:

When I was nine years old, my white-haired, four-foot-eleven-inch (1.5 m) maternal grandmother came to spend a few weeks with us at our home. One afternoon while she was there, my two older brothers and I decided to dig a hole in a field across the street from our house. I don’t know why we did it; sometimes boys dig holes. We got a little dirty but nothing that would get us into too much trouble. Other boys in the neighborhood saw just how exciting it was to dig a hole and started to help. Then we all got dirtier together. The ground was hard, so we dragged a garden hose over and put a little water in the bottom of the hole to soften up the ground. We got some mud on us as we dug, but the hole did get deeper.
Someone in our group decided we should turn our hole into a swimming pool, so we filled it up with water. Being the youngest and wanting to fit in, I was persuaded to jump in and try it out. Now I was really dirty. I didn’t start out planning to be covered in mud, but that’s where I ended up.
When it started to get cold, I crossed the street, intending to walk into my house. My grandmother met me at the front door and refused to let me in. She told me that if she let me in, I would track mud into the house that she had just cleaned. So I did what any nine-year-old would do under the circumstances and ran to the back door, but she was quicker than I thought. I got mad, stomped my feet, and demanded to come into the house, but the door remained closed.
I was wet, muddy, cold, and, in my childhood imagination, thought I might die in my own backyard. Finally, I asked her what I had to do to come into the house. Before I knew it, I found myself standing in the backyard while my grandmother sprayed me off with a hose. After what seemed like an eternity, my grandmother pronounced me clean and let me come into the house. It was warm in the house, and I was able to put on dry, clean clothes.
With that real-life parable of sorts in mind, please consider the following words of Jesus Christ: “And no unclean thing can enter into his kingdom; therefore nothing entereth into his rest save it be those who have washed their garments in my blood, because of their faith, and the repentance of all their sins, and their faithfulness unto the end.” 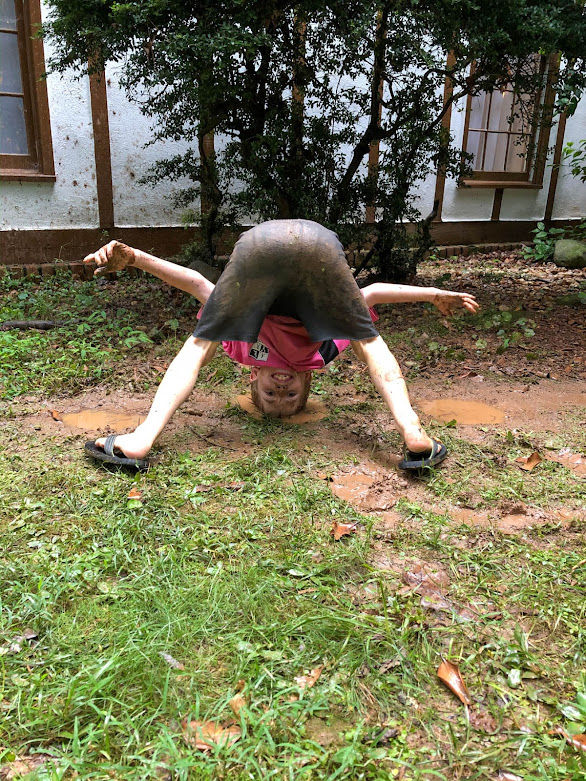 Benjamin had to be sprayed off before he was allowed to drip his way through the house to the shower. He didn't particularly enjoy being hosed down—hose water is cold and the spray, at times, uncomfortable. However, he needed to be much less muddy before he'd be allowed into the house (I wouldn't dare say we managed to get him clean). 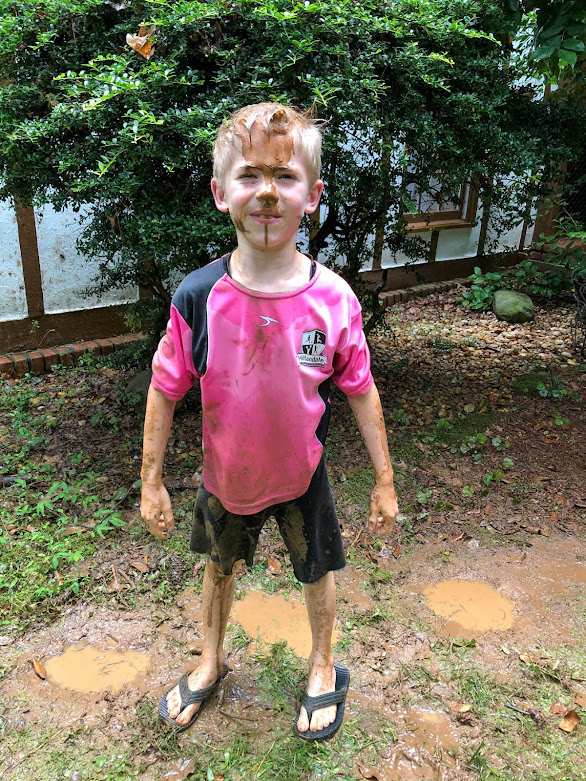 He did, however,  love being allowed to take our family walk "dressed" like this. Mr. Paul and his wife were laughing from their yard as they watched Benjamin dance by. "I don't even want to ask..." Mr. Paul chuckled.
Here are the sisters, who managed to stay mostly clean, despite stomping in a few puddles themselves: 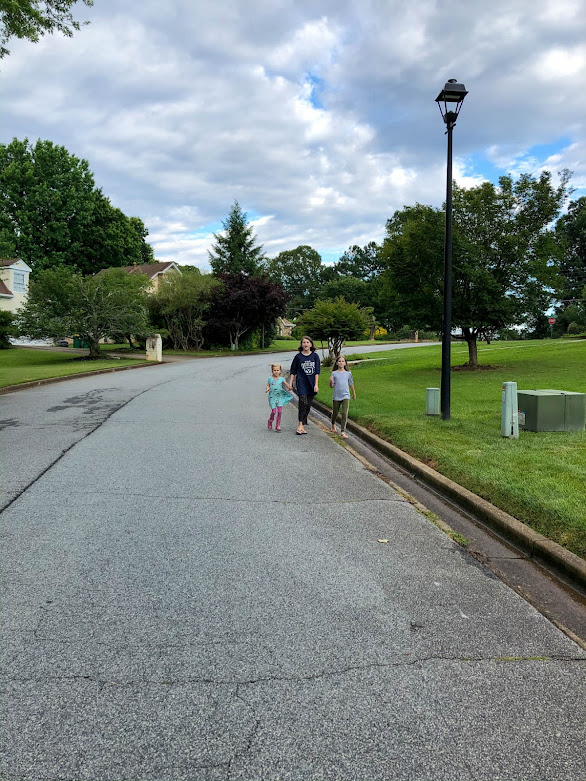 They somehow all ended up soaking wet as well when Daddy was spraying off Benjamin...
Alexander stayed clean and dry, however. We offered to let him play in the mud and he said, "No, thanks. That's yucky." And he fretted the entire walk over how muddy and gross Benny was. And after the children tiptoed soaking wet through the house, leaving little wet footprints behind, Alexander sighed heavily, announced the floor "too wet, too yucky, too messy, too gross" and got a towel so he could mop up after everybody. 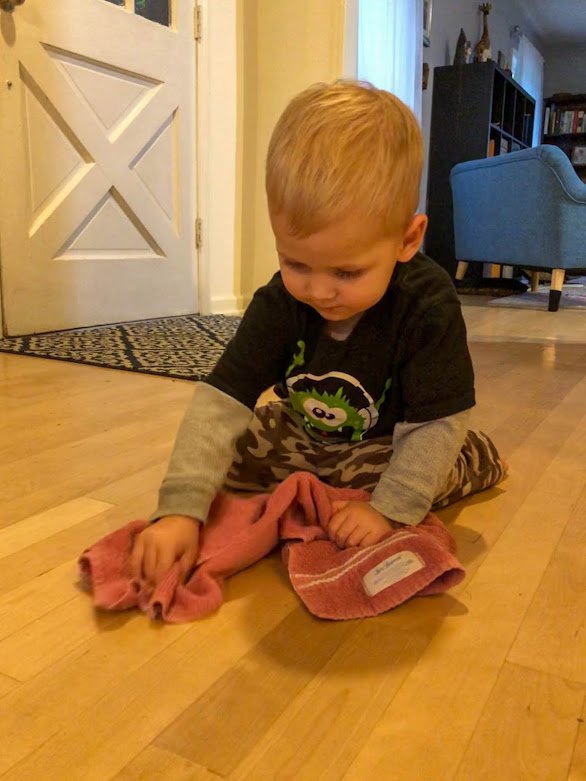 He's my tiny, tidy boy. He does not like having messy hands and will clench his fists when he's finished eating (because although he's tidy, he still uses his fingers*) and will beg to be washed off. He keeps his fingers tucked neatly away and won't touch anything with them.
And this afternoon he organized his board books by category: "These are all my animal books!" he happily declared. "These are my 1, 2, 3, A, B, C books! These are my..."
Be still my bibliophile heart! I think I'll keep him! His room is a disaster because he "organized" his books on the floor and has been sleeping in a tent for the past week...but he at least tries to be organized.
Anyway, once everyone was showered, dried, and in clean clothes, we gathered for our official family night lesson where we talked about getting muddy and then needing to be cleaned off and listened to a selection from Elder Haynie's talk.
Benjamin's cavorting in the mud couldn't have worked out better if I'd planned it!
Posted by Nancy at 11:18 PM