Late last year I got a message from my friend Tamsin, asking if I'd like to participate in the creation of a "neighbourhood newspaper," of sorts—the kind you might put together in your youth with your neighbourhood friends, only a step up from that because your neighbourhood friends have all grown up and now lives miles and miles apart. I thought it was a beautiful idea...but we were also a little swamped in schoolwork over here, so we just submitted some poems and artwork we made during our school time.

The magazine finally arrived—on Sunday evening—and it was a very exciting thing! 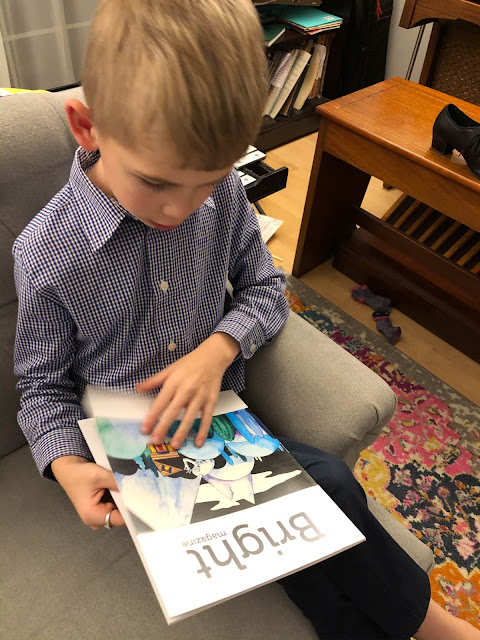 Benjamin was the first one to read it and when he came across my piece of artwork he said, "Oh, is there where you got the idea for your picture?"

"Keep reading," I told him.

"Wait! This is your picture!" he said. He was very impressed. 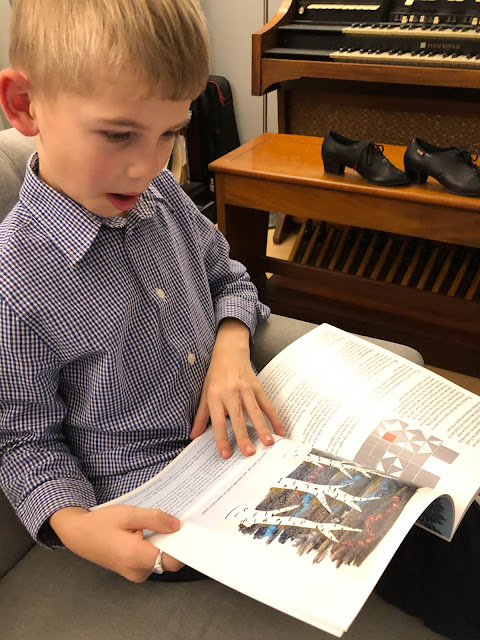 Really I should mention that while this particular picture was not an inspiration for me (since it was, in fact, my own artwork), there were many things that did inspire me. The black background was painted with the acorn ink that we made. I experimented with different paints to see which black was the blackest and the acorn ink won (beating out both Crayola watercolour and Miiram's fancier watercolour set). I sprinkled salt on to give a starry/snowy effect (my friend Brooke used this technique on some of the artwork in our upcoming book and I thought it was so beautiful so I asked for her secret; she's much better at it than I am). The aurora borealis idea came from Mrs. Robertson's classroom. We are studying Arctic cultures right now and I did a unit on the same theme with Mrs. Robertson. We did an art project where we made northern lights with chalk and torn paper. I couldn't smudge my chalk very well because of the salt encrusted on my paper...but I think it turned out alright. So my project was a mashup of many different inspirations.
Here's Benjamin when he spotted his artwork in the magazine: 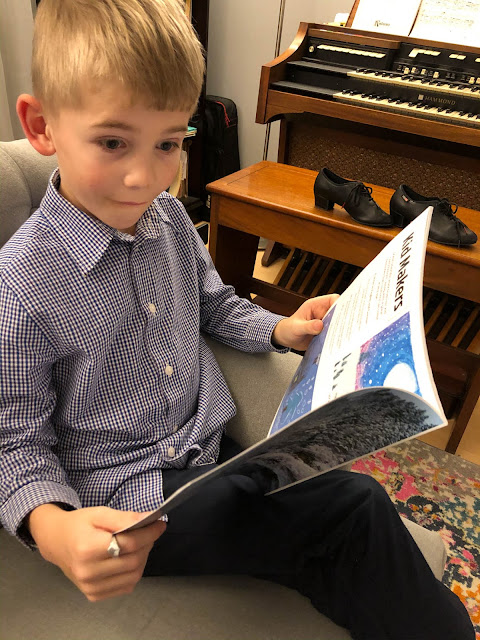 He thought it was pretty amazing to see his work in print (and I agree that that can be a very exciting feeling). Zoë and Miriam both submitted poems. Rachel...slacked off and didn't get anything ready so she missed out on this edition (I hope there will be future editions, though I know how much work putting together something like this is).

If you want to take a look at the magazine, you can preview it here.