We're trying a a Monday through Thursday school week this semester and today was our first Friday off (since this was our first week back at lessons). I have to admit, it was kind of nice to have an extra day to relax. The weekend doesn't ever feel long enough.

Besides, as seems to be a perennial problem in my homeschool planning, I was pushing way too hard at the beginning of the year. I always try portioning out the curriculum to last the whole school year but then end up blowing through everything. Like, we have three units left in our science curriculum...which I will be lucky to stretch out until the end of the school year. And I sat down with Rachel to finish pacing her math textbook and she'll probably finish by April, which surprised me (though considering we started the school year in July that probably worked out about right).

Anyway, aside from working on the odd "late" assignment and music practicing and mandated reading time and "working on goals" time, the kids are pretty free to do what they want. All of a sudden their free day is sounding rather micromanaged (so it might still find its way into our school records, depending on how much learning vs. free time I feel the kids are getting out of this experiment). Rachel and Miriam worked on cross-stitch and planned some sewing projects. Benjamin played a ton of LEGO and we built the tin can robot my sister Kelli sent him for Christmas. Zoë and Alexander played so many games. It was a good day. 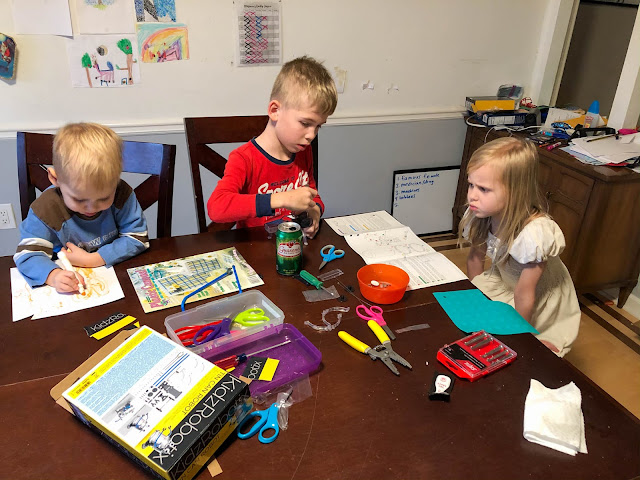 We had only one small problem with the robot when a wire that had been soldered to the motor popped off. But luckily we have a soldering iron! We bought one for fixing our van door years ago (figuring a soldering iron would be a lot cheaper than paying someone else to fix our door (and that was definitely true, but still we fretted quite a lot about whether we could afford to spend all of $20 on a soldering iron and I'm just so glad that we're not in that particular financial condition anymore (ie. feeling like $20 is an unconscionable amount of money to spend...even on something that is pretty close to a necessity)). Anyway, Andrew did the soldering in the van, so this was my first time using a soldering iron, but no big deal! It is pretty much exactly like using a pyrography pen and I figured those out last weekend!
There was just one incident when Alexander, who was colouring/cutting/gluing at the table (his favourite pasttime), accidentally dropped/threw/slid a pair of scissors off the table and they went flying right in front of my face literally just as I was soldering the wire back on.
So I yelped and the scissors clattered to the floor and Alexander pushed her chair back and fell off of it and there was screaming and Andrew ran out of his office and...there was a bit of pandemonium.
But no one got hurt.
And here's our final product: 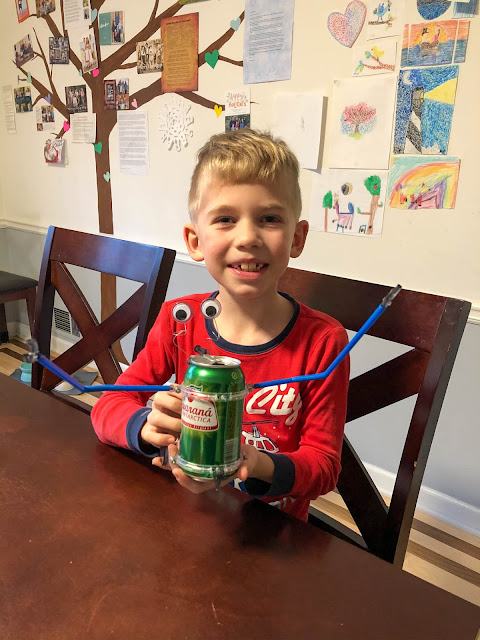 You might notice that the can is a Guarana can (a popular drink in Brazil).
After Christmas I mentioned (jokingly) on the blog that Benjamin would have to wait to put his robot together until we procure some pop cans, but that doing so would probably take awhile because we don't usually drink anything but water. So my sister sent us a case of Guarana! The kids thought that was pretty fun to try and Benjamin was happy to have a tin can, though he was bothered that he couldn't take off the "wrapper." The tin can on the robot package was a pure silver colour (no brand markings or anything). Benjamin asked if there was any way to take off the label and Andrew told him something about how...no...there's not. Cans are just squished, melted down, and turned into new cans. There's really no way to take off the paint (other than sanding it off, I guess)
Benjamin understood that to mean that he couldn't use these cans for his robot because they would just get squished, so today when I suggested he put together his robot kit he told me why he couldn't.
"We still need to get a tin can!" he said.
"What do you mean?" I asked, looking at the box of guarana still sitting on the floor. "We have plenty of cans. Don't you have an empty one already?"
"Yeah, but I can't use it."
"Why not?"
"Dad said it will just crumple."
"I don't think Dad said that."
"He did! You can ask him."
Dad definitely didn't say that, but we asked him and cleared everything up and used a guarana can for Benjamin's project.
At first it didn't walk like it was supposed to, but we soon figured out that we had a couple of loose screws and once those were tightened up he robot just took off. Here are the kids watching it walk down the hallway: 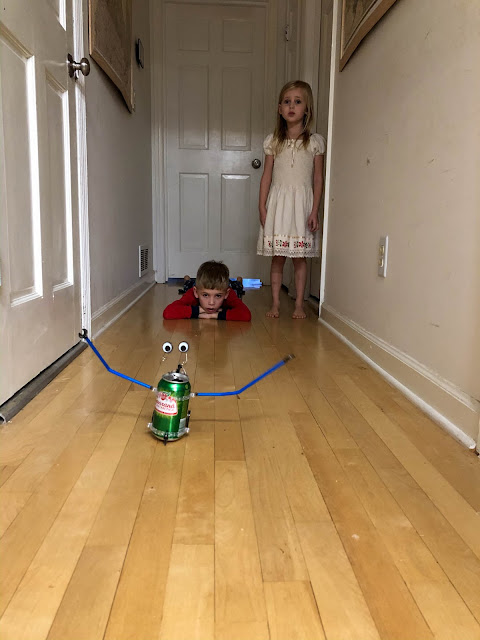 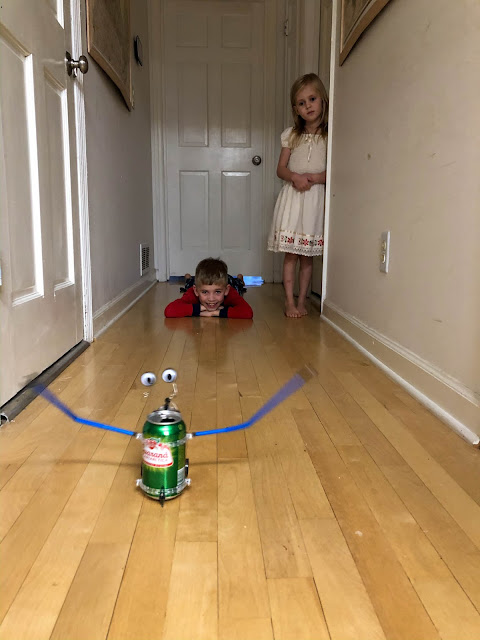 And here are the kids enjoying the new reading nook: 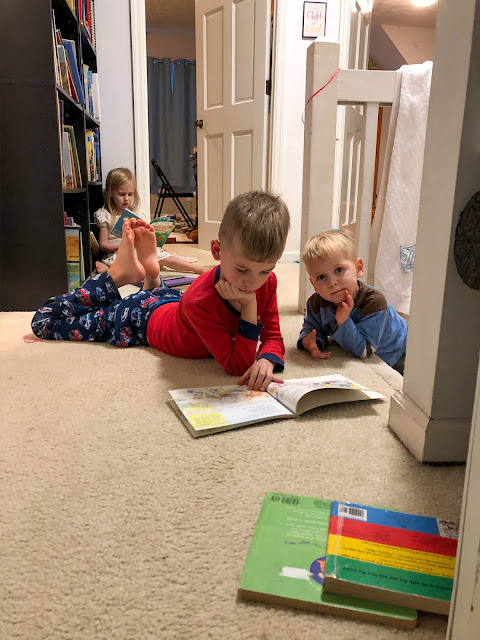 We rearranged some things and put two bookshelves at the top of the stairs and then filled them with the books. Miriam helped me sort them out into categories, so we have a shelf of fairy tales and classic stories, a shelf of animal books, a shelf of history and geography, and so on. So far the kids haven't been great at putting things away, but I'm hoping that if we stick with it long enough they'll learn a little bit about genres (and about keeping things tidy, but I really have no grand illusions on that front and fully expect books to be left scattered at the top of the stairs for the foreseeable future). Perhaps we'll add some labels to help the children out. 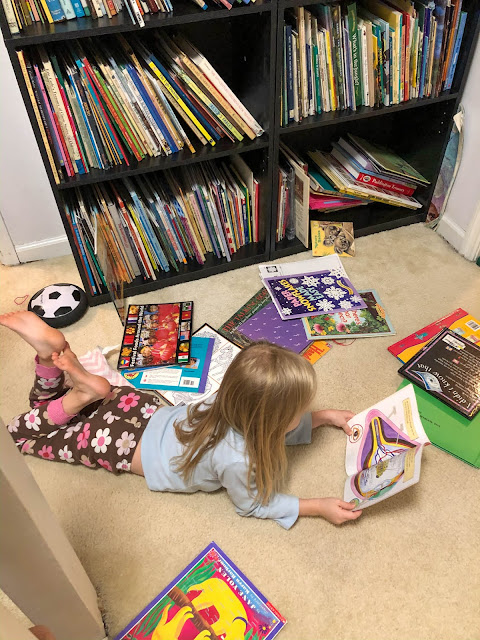 Having this many books almost feels silly, but libraries were always my favourite part about school—whether that was classroom libraries or the school library. I used to volunteer at elementary school libraries when I was in middle school. And my mom ran the IMC (Instructional Materials Centre) for the district and I would love going to work with her as well (so many books). I kind of felt like my kids were missing out on that aspect of school—the wonderful part of knowing there were far too many books in the world for you to ever read, and being allowed to choose from a zillion titles what you wanted to read in that very moment—especially since we haven't been able to visit our local library lately.
The library's status has been flexible according to local conditions. Recently it's been open and I went (on December 28) to handpick some titles (I had some holds come in and our last batch of books was due), but they're switching back to curbside pickup starting on Monday. It's a good call, really, since our numbers are a little wild here—over 300,000 cases in the United States today, with over 13,000 in Georgia alone! This week, however, they've just been shut down altogether "due to health reasons."
Anyway, the children haven't set foot in a library since March, so this will have to do (and, truthfully, it's been doing wonderfully). I'm not sure we'll end up keeping every single book from this particular classroom collection (we haven't—we drove around and filled up some "Little Free Libraries" with duplicates), but we'll read through them and see what we love and what we don't.
So, we haven't been to the library in ages (except for me to run in as fast as I can to collect all my holds) and we haven't gone grocery shopping in ages. I don't think we've done grocery shopping since before Christmas (and, honestly, we may have simply done an online order then). Our shelf-stable food supply is doing great, but our fresh foods are...not.
When I opened the fridge to see what I could possibly make for dinner I noticed that we had carrots, and that was about it. So I was googling recipes for carrots and chicken (we have some frozen chicken) when Andrew walked into the kitchen.
"Oh, are you going to make dinner?" he asked.
It was already past 5:00. "I figured somebody should."
"I was just going to tell the kids to have cereal or something."
"We have no milk."
"We have some milk."
"We have like an inch of milk at the bottom of the jug."
"That's some."
"That's not enough for dinner. We can't even do milk and cereal for dinner. How pathetic is that? I'm trying to find a recipe for chicken and carrots but the internet doesn't seem to understand that I need a recipe for only chicken and carrots. Like, those are the only two ingredients I have, internet! I don't have celery or potatoes or slices of ham or... Just carrots and chicken...that's it...here!"
I found a recipe for instant pot honey garlic chicken and carrots (it had to be an instant pot meal because it was already past 5:00 and I hadn't thawed meat or given much thought to dinner at all) and it was really quite good. We had it with brown rice.
Tomorrow we'll probably do a curbside grocery run.
Posted by Nancy at 12:33 AM