We watched the inauguration as a family, which I think is the first time I've ever done that (so I guess we're starting the kids young). It felt important, somehow, to watch it...after all these months (or years, depending on how you look at it) of...assault on reality. Like, if we watched it then it had to be real.

The Biden/Harris ticket wasn't my top choice. In fact, I was surprised when the ticket was floated and even more surprised when it won the official nomination. But I think it's going to be okay. In his address, President Biden stated, "My whole soul is in this!" And I truly believe that. I probably won't agree with every decision he makes, but I will at least be able to believe he'll be making decisions with the country in mind.

I loved what Fauci said about working under a new administration during his first press briefing (because we have those now!!) and how "liberating" it is for him: "The idea that you can get up here and talk about what you know, what the evidence, what the science is—let the science speak." Our nation's top office has been holding science hostage and...now science is finally free to do what it's supposed to do—to explore, to push boundaries, to tease out information (that, sure, is often refuted as we explore and learn more...but that's just the way science works).

Anyway, Fauci didn't speak at the inauguration so I'm getting a little off-topic. I'm just glad that man is finally free to do his job. And I was so glad the inauguration was kept "intimate" (though there were times when I was screaming internally at people to fix their masks and to keep their distance). Having a large crowd would have been ridiculous.

It was rather amazing to see a woman sworn in as vice president. I wish it could have happened years earlier. I wish we could have a female president. Women are great at running things. It's about time.

Maybe I'll write more about the inauguration some day. Maybe I won't.

We finished reading Julie of the Wolves yesterday as well, so I gave them the option of making a collage about the book or about the inauguration (or something else for those of us who needed a different topic to focus on (Zoë's topic was stuff-I-think-is-pretty-and-or-interesting)). 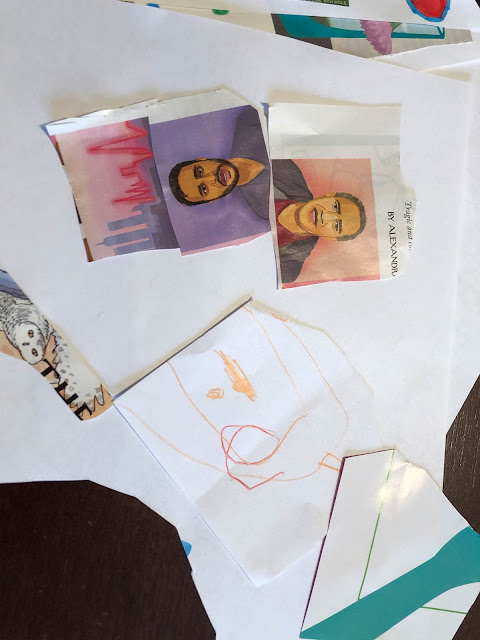 He cut out some faces, a city scape, and a snowy owl. He managed to find his name, which he was pretty excited about (even though it actually says "Alexandra"). He also drew his own picture to glue on his collage. And cut the corner off for some reason. I'm not sure what his theme was.

Zoë stuck mostly with cutting out a big, full-colour picture and then adding an element from another picture. In this case she added the beckoning cat (we recently read Maneki Neko: the tale of the beckoning cat so she was extremely excited to find an example of a beckoning cat in the wild, so to speak): 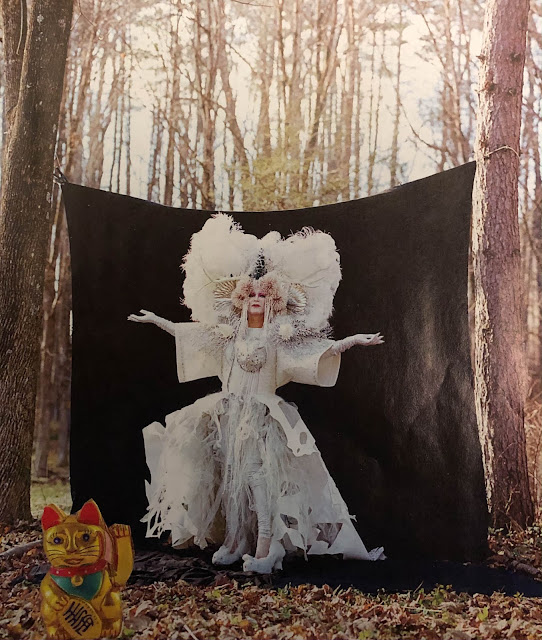 Benjamin made a couple of collages like this one, which I think is somewhat arctic-themed:

Miriam made an arctic-scape—she's got an ocean and mountains and northern lights in the sky: 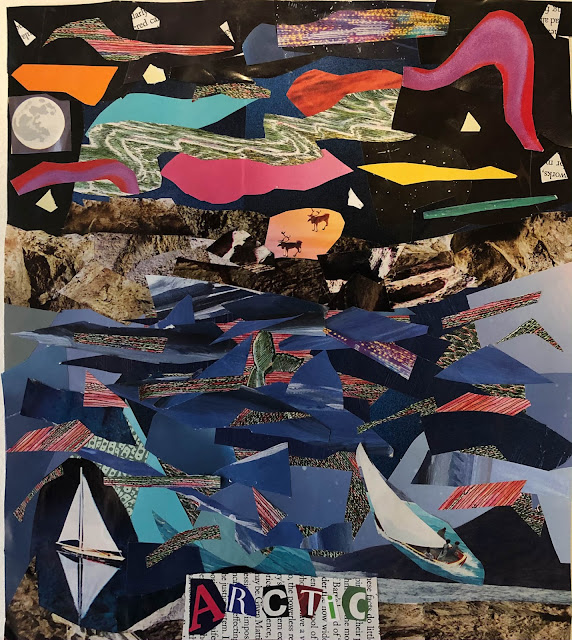 Rachel focused on the word "peace," which is how she felt while watching the inauguration. She found it refreshing to listen to a leader promote unity with soothing rhetoric and who didn't seem to want to prop the United States up as the best, but is simply hoping for goodness. That's all I want, too. I don't think we need to always be the "best" nation (being the "best" at anything seems rather lonely, really) but I do want us to be a good nation (that way we can be friends with other good nations—it's much less lonely that way). Here's to peace—peace in our hearts, peace in our homes, peace in our borders, and peace abroad! 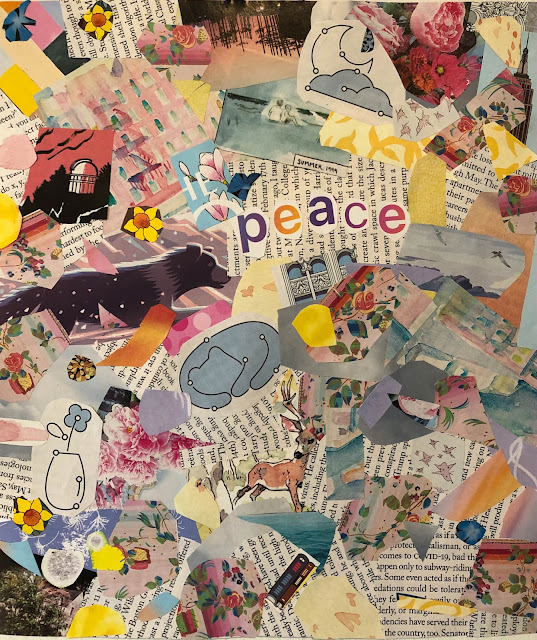 This is my collage: 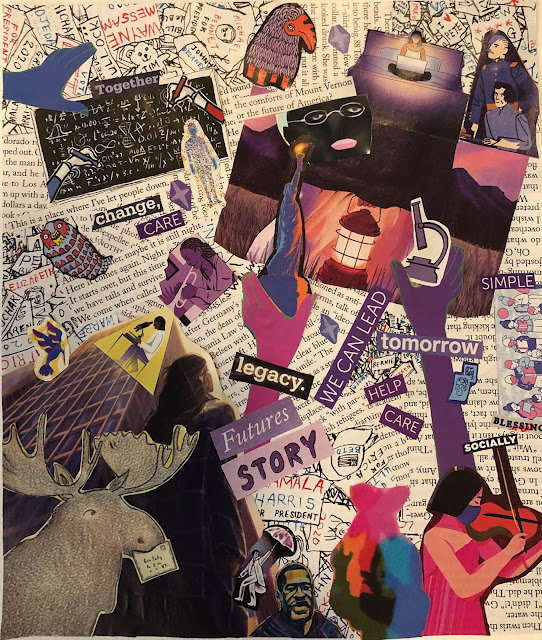 I probably would have kept working on it for hours more, but it was time to clean up and move on to other activities. In my "new literacies" class we've been talking about remixing—taking something familiar and merging it with something novel. I think collages definitely qualify as remixing. We were able to take old magazines and turn them into artwork and, in this case, a bit of poetry. Of sorts.
Miriam said that she liked how I used words in my collage and she very poetically described it as poetry, but I can't remember her exact words right now. A poetic picture? Something like that. And it is a bit political, but that's probably inevitable. Amanda Gorman said, the choice to create, the choice to be heard is the most political act of all. Honestly, I don't think there's any way to be apolitical. I've often heard people say that—they don't like politics or they don't like to get political—but I think the choice to be apolitical is a political choice. That's you saying that you're satisfied with the status quo.
Anyway, there's a lot in my collage. I will share some of the poetic symbolism I was trying for: I used a large political cartoon of old campaign signs being dumped into a heap along with clippings from columns to make the background. I tried to find pictures that were purple, symbolizing the unity of the red and the blue. You can see a red hand and a blue hand working together at the chalkboard to solve a problem. Purple hands are holding up our legacy and our tomorrow. The woman in the city is looking toward a woman carrying a lantern in the wilderness.
I clipped some lines from the magazines that I appreciated—from some poems published in the New Yorker, which honestly I wish I had kept the references for (but believe me when I say that things were getting crazy at the table with six people working on collages). One line is: the comforts of Mount Vernon or the future of America? (That's actually from "Mt. Rushmore" by Clarence Major). The other line is from "Shanghai" by Megan Fernandes: "This is a place where I've let people down."
But I added the words "change, care" under that line before putting in the concluding stanza: "for another, maybe it is still night. / Here it comes again. Night. / It starts over, but this time / we have tails and survive. / We come when called."
I don't think any other lines from the column clippings show in their entirety; if they do, they were not intentional.
The woman sitting on her bed with her laptop blends into the skirt of the woman holding the lantern. There is also the face of Sojourner Truth looking up at her while some Civil War soldiers (and some random purple creature) look over her shoulder. At the bottom left is an image of George Floyd with someone holding an umbrella over him.
The moose is there because he's cute. And because he's probably Canadian. Or at least, to me he is—a reminder that we can learn from outsiders, a reminder that outsiders can be insiders...
There's probably to explain in the picture, but I think that's mostly everything.
Andrew joined us to admire everyone's work and then spotted this cover of the Atlantic sitting on the table and said, "Oooh! Who made that one?!" He started laughing pretty hard when he realized the answer was "a professional artist." 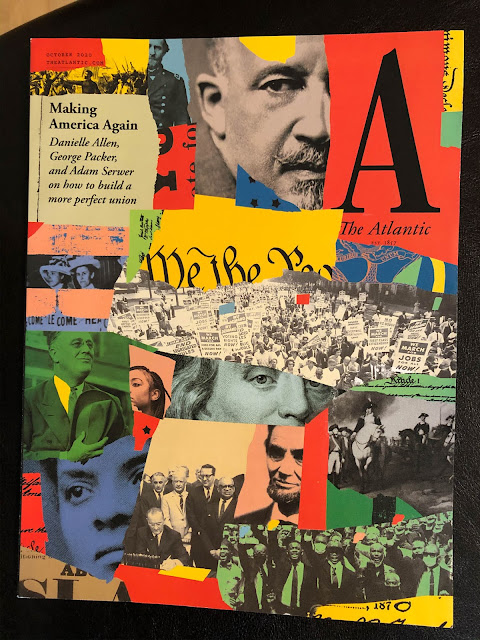 I have found my children making collages all over my house since we did this art activity. Here's a collage Miriam made on the floor, for example: 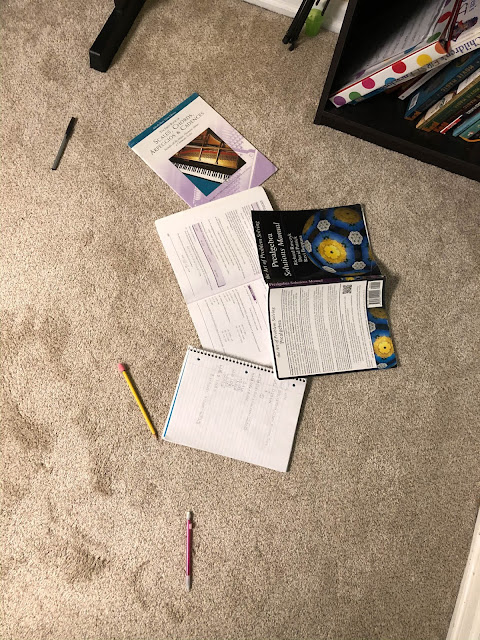