Today started off well enough. The kids got up and started working on their math right away. The Georgia run-off election was called in favour of Reverend Warnock, which is really cool because he will not only be the first "African-American United States senator from Georgia," but from the entire Southern United States. High time! There's some good information on African American senators here.

And Jon Ossof, the other senator elected today, interned under John Lewis for a while.

By noon I had convinced the kids to give me some time to write and I somehow managed to hammer out an introduction. I say somehow because while I was still working on it, Congress was trying to certify the election results and things got a little crazy. Naturally, there were protesters in DC, continuing to assert that the election results are fraudulent. I suppose they have the right to protest anything they want, though protesting against fairy tales (like tilting at windmills) seems like a waste of time to me. To be fair, most of the protesters remained outside the capitol building (asserting their freedoms of petition, speech, assembly, as is their right like normal, fairly decent people), but hundreds of right-wing extremists stormed the capitol building, interrupted the vote certification, and ransacked the place (I don't know how fully they ransacked it, but people were sitting in desks with their heels up, ripping signs off walls and doors, stealing letters and—quizzically—podiums?). There were a few bombs that were found (but they were disarmed before they exploded, thankfully).

It was all rather wild to watch go down. A certain someone...thanked the crazies and allowed them to go home "with love"...which was wild to witness given the treatment of BLM protesters this summer. But...whatever...

Oh, also, today was our deadliest COVID day, with 4100 deaths today (according to World-o-Meter). 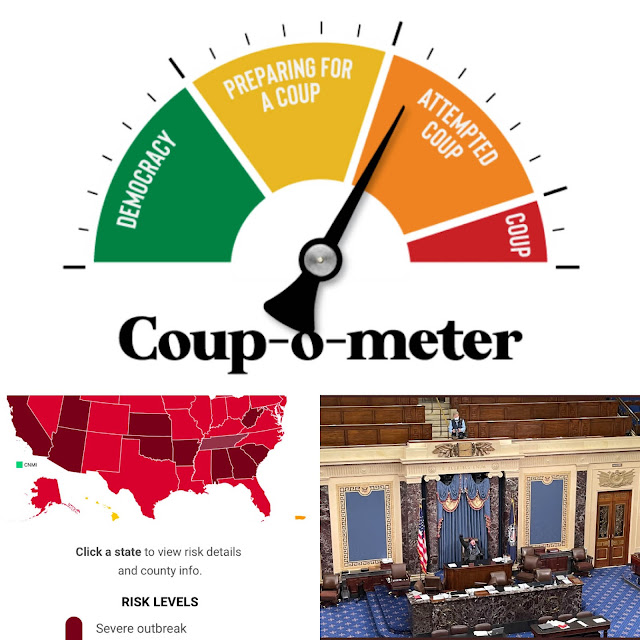