In my stomping boots...

Zoë already had boots. My sister had sent her some pink light-up boots with unicorns on them and, honestly, everyone's been mooning over them since May. I should have thought of rain boots for Christmas. But I didn't. So I told the kids this was their Valentine's Day present and they each got a pair of new rain boots.

They also need church shoes but I don't think we'll be going to church (physically) for a few more months so we'll wait on those. But we do need to go outside.

Yesterday boots arrived for Alexander, Benjamin, and Rachel...and me (I got boots for myself because I'm usually the one who takes the kids romping). Benjamin was thrilled with his blue camouflage boots and immediately started preparing for an adventure in the back-backyard. He wore his boots the whole morning while he was doing his school work.

Alexander put on his boots—green dinosaur boots—and started jumping up and down with glee. "Oh, mank you, Mommy! Mank you!" he said. And he happily clomped around the kitchen putting away the clean dishes.

Rachel was happy about her boots (plain grey), which also fit like a glove.

My boots were too big. Somehow I ordered the correct size for all of my children, but not for myself. So I'll have to return those.

Miriam moped a bit about not having boots yet, though I can't control when the packages arrive!

She was a little mopey today after lunch when I suggested we head to the river again to try out our new boots. I was very sorry hers hadn't arrived, but if we didn't go to the park on a Friday while everyone was in school then we wouldn't be able to hit the park until next week (because we avoid parks on weekends these days). Fortunately, just as she was putting on her ratty, old sneakers...a package was dropped on the doorstep.

Her boots—black and white plaid! And the perfect fit!

I mean, I evidently can't buy shoes for myself, but I got shoes for all the kids, so we're going to call this one a win! The kids had a great time splashing in the creek and mud while I watched from the bank in my plain, ordinary, not waterproof shoes. 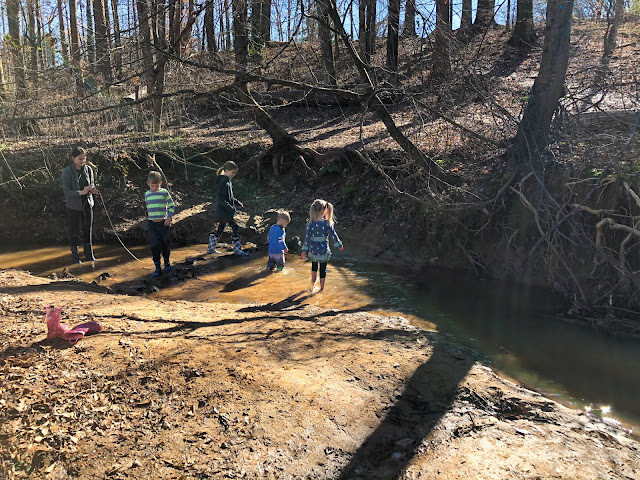 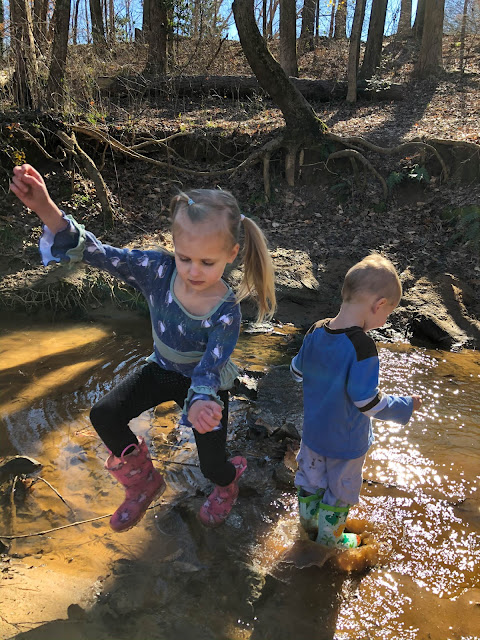 The boots worked surprisingly well for Rachel and Miriam. They understood the purpose and limitations of the boots and respected those parameters. 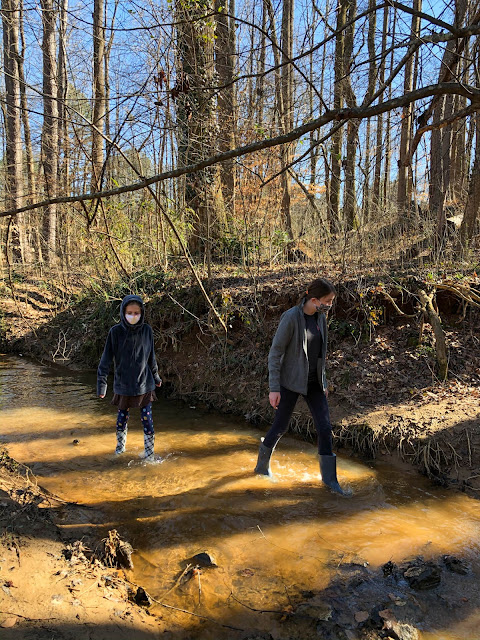 The littler three all learned that rain boots work very well up until a point but are completely useless if you push that boundary. All three of them flooded their boots within minutes. I should have gotten them hip-waders. Or wetsuits, perhaps. 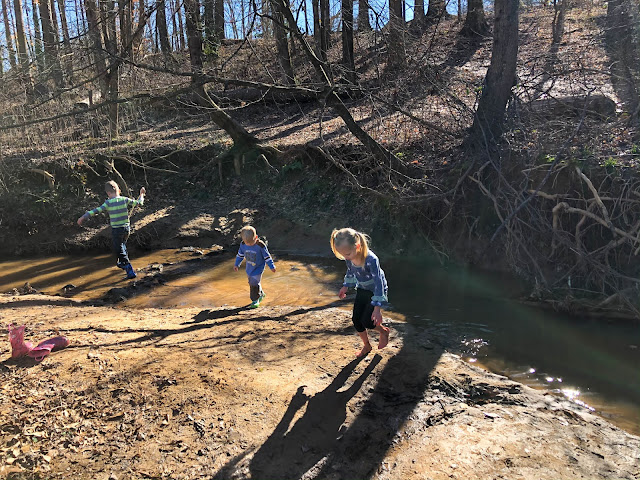 As you can see, Zoë didn't even keep her boots on the whole time. She took them off and waded barefoot. The water was really quite cold, but she didn't seem to mind a bit (until she had to stop wading, and then she was very glad that I had packed a fresh change of clothes for her). 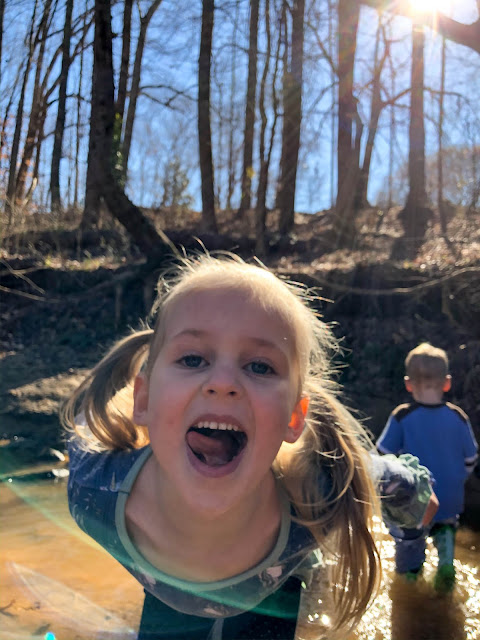 Alexander's tongue was killing me. Every time he slipped, his tongue would shoot out of his mouth, tightly curled. Hilarious. 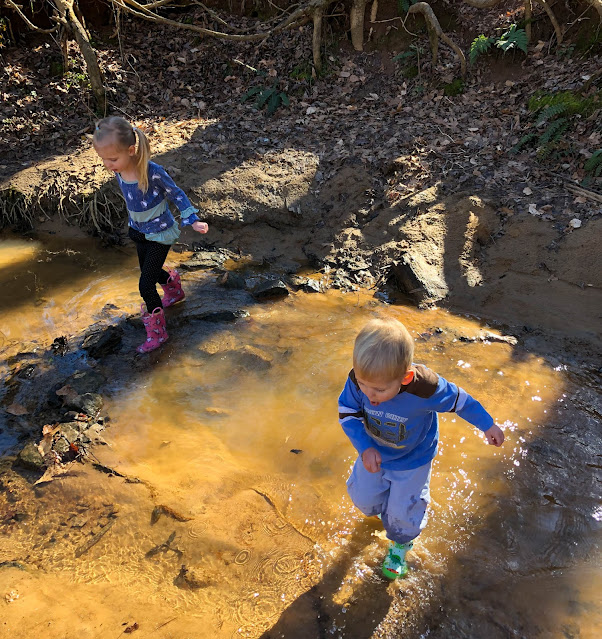 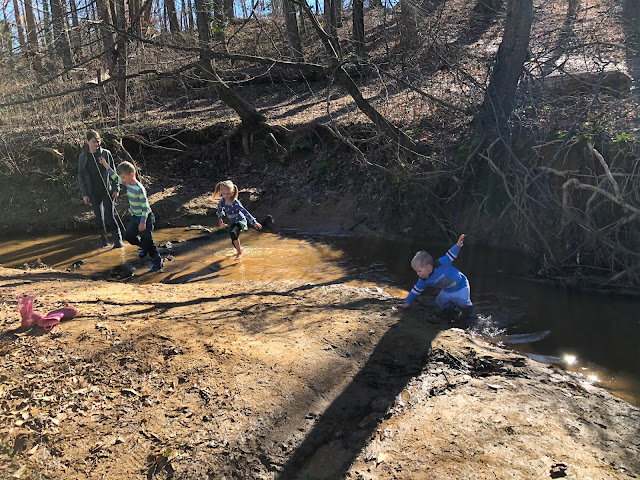 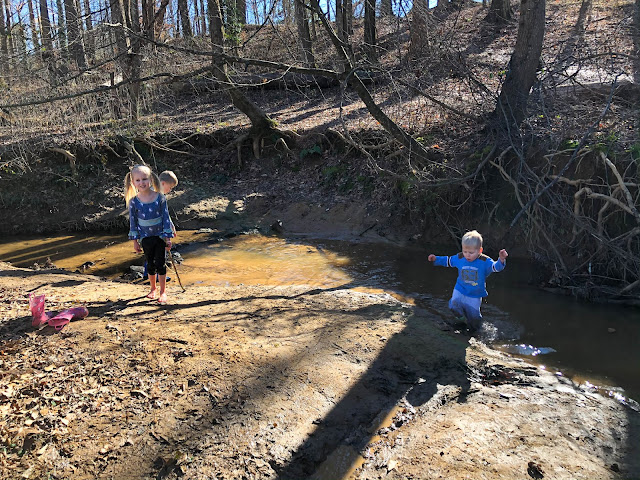 He was completely soaked and rather muddy by the time he was finished exploring the creek and was also very grateful for clean, dry clothes. 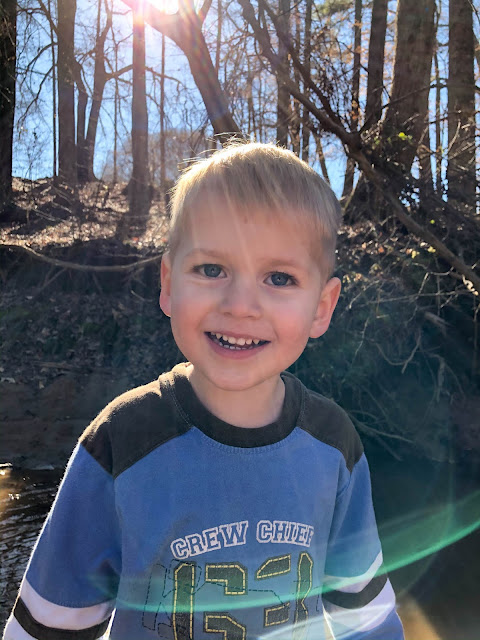 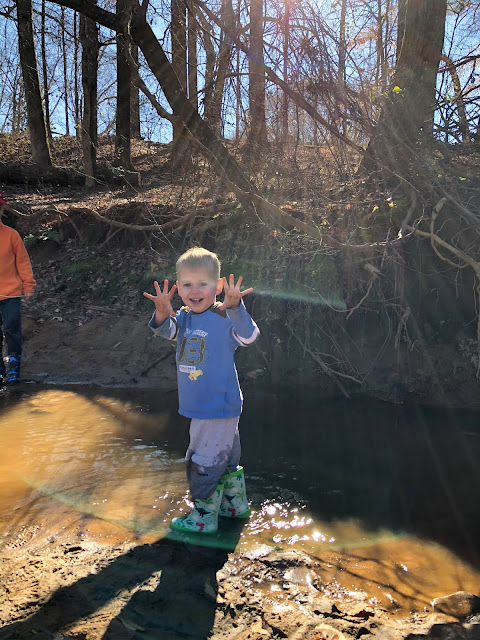 I usually bring clothes for Benjamin as well, but today I didn't because I explained to him how boots function and told him to be mindful of how deep his boots would allow him to go. He...was...not...mindful. I shouldn't be surprised. And I should have packed clothes for him. The child basically went swimming. He came back to me, dripping and shivering, and asked where his clothes were.

We stayed at the park for quite a while (doing dry-land activities in the fields) and he didn't complain about being cold at all.

Here he is before he got terribly wet, sitting down so he can empty out his boots, which were completely waterlogged. 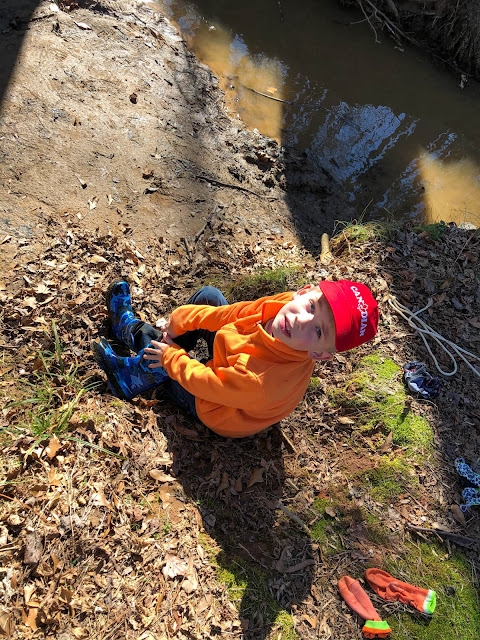 Zoë discovered that while the creek water was rather chilly, a nearby mud puddle had been warmed by the sun and felt nice and warm between her toes. She spent her time running between the mud (to warm up) and the creek (to rinse off). 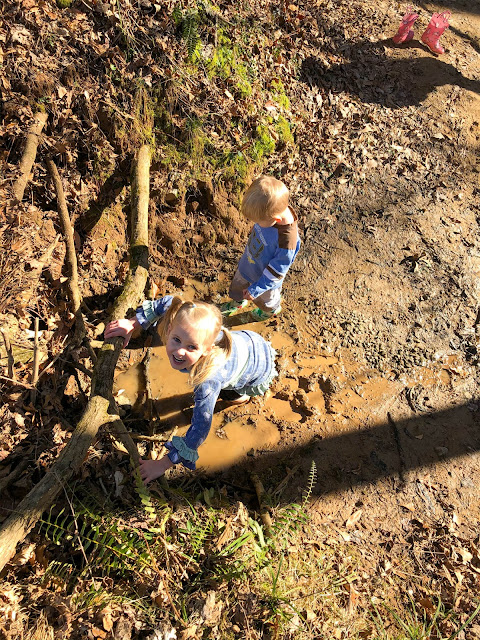 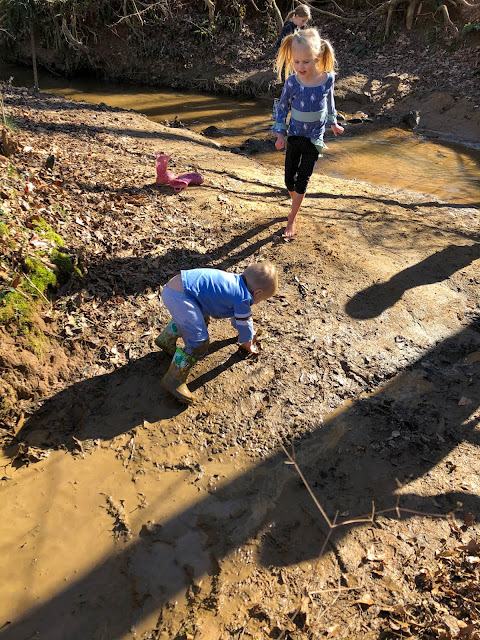 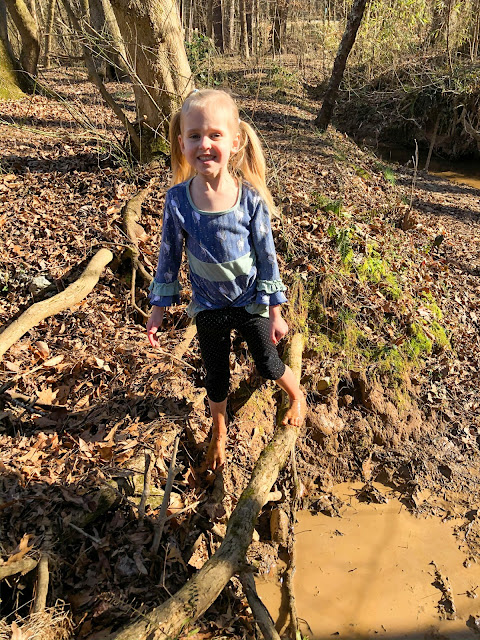 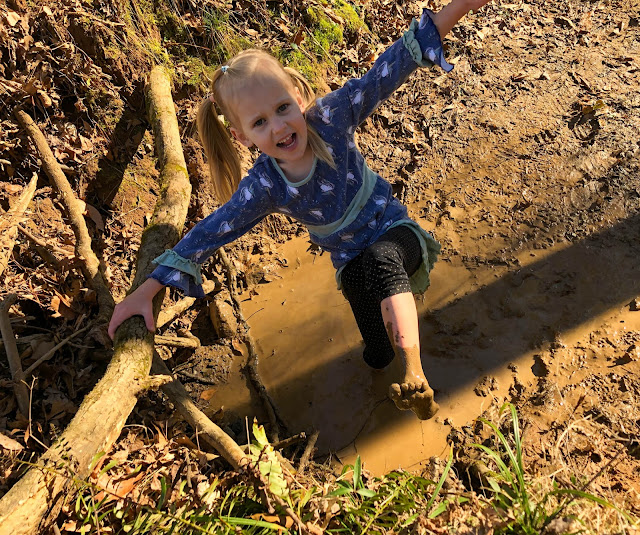 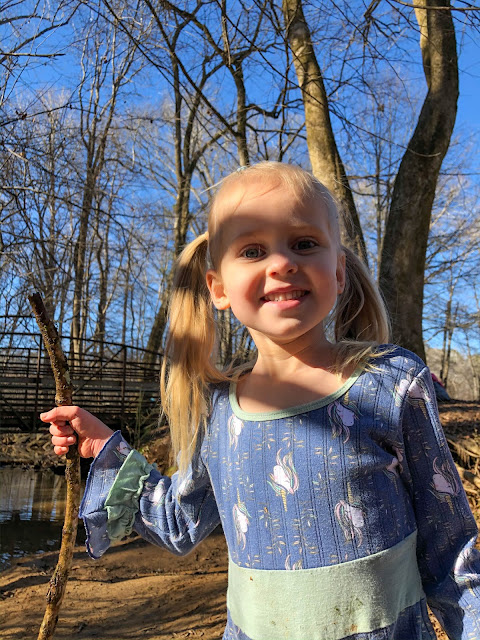 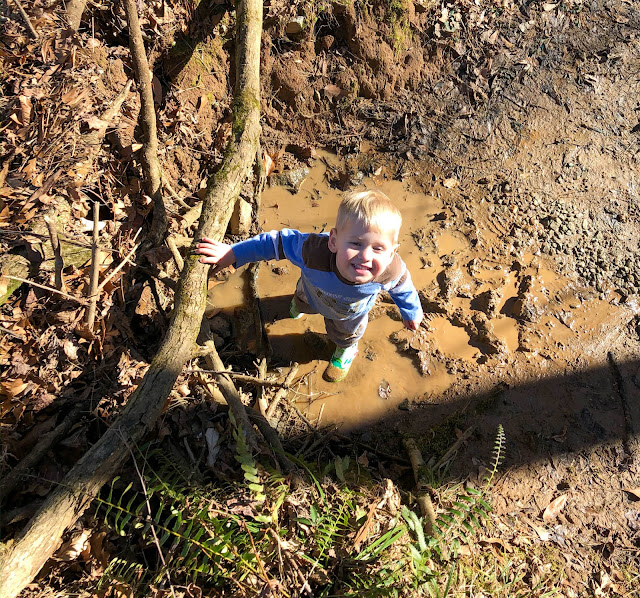 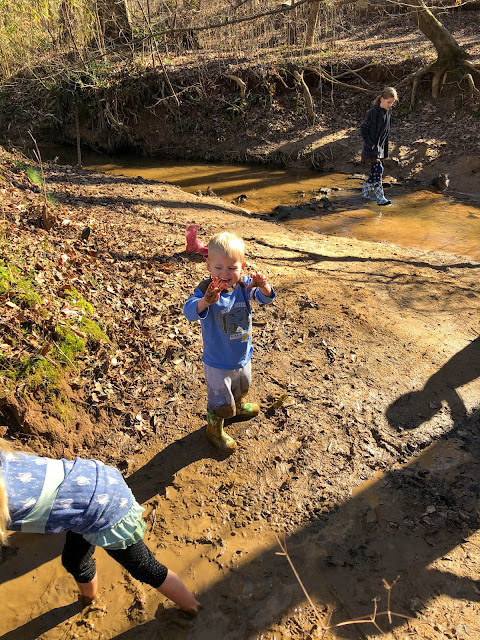 Though, I mean, who could blame him. The mud hole was a popular place this afternoon! 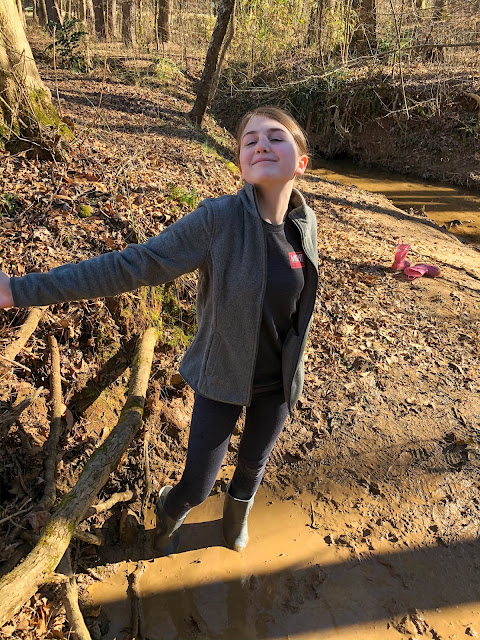 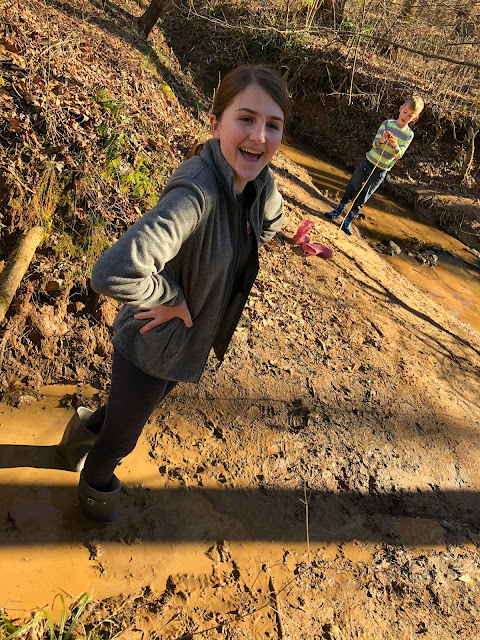 It was good to get out some stomping and splashing out of our systems. 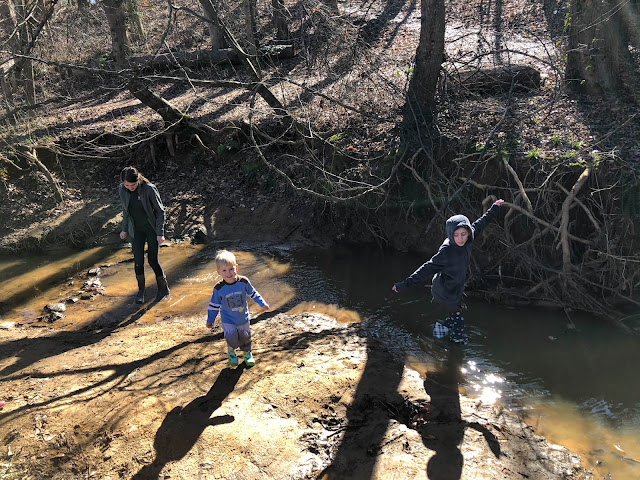 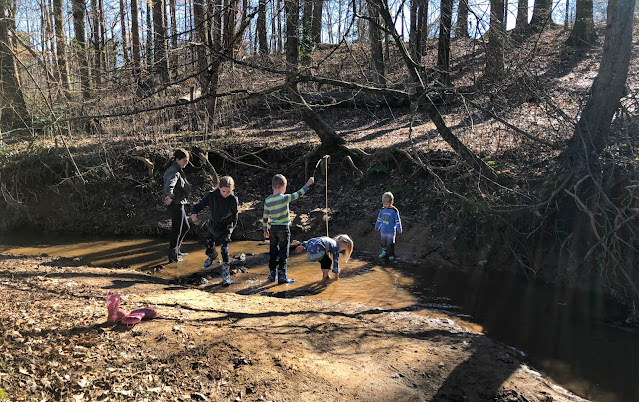 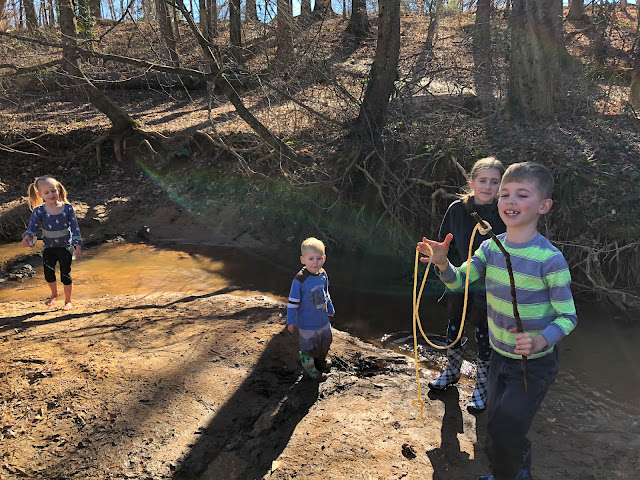 Here are a few last pictures of the little ones (I honestly don't know how they lasted in the water as long as they did; it was freezing). 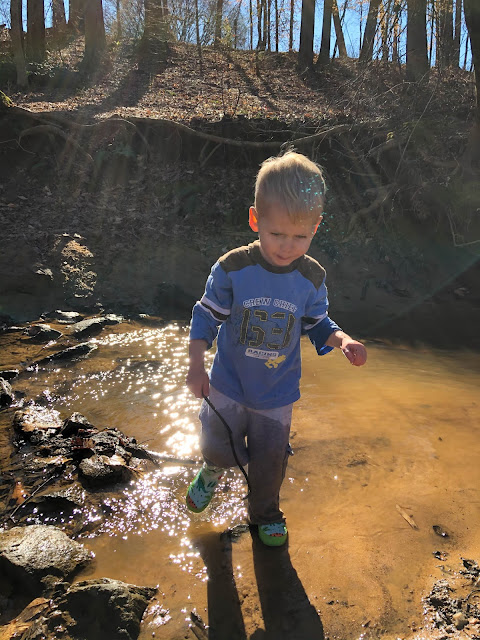 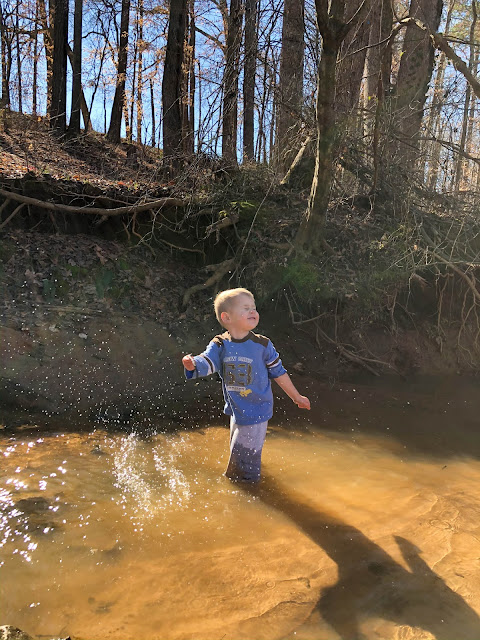 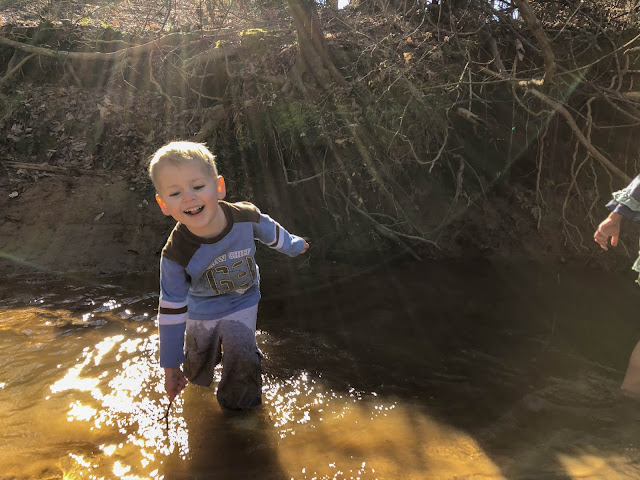 They paced in front of me singing "Row, Row, Row Your Boat" at least a billion times, pulling themselves along with their little stick-oars. 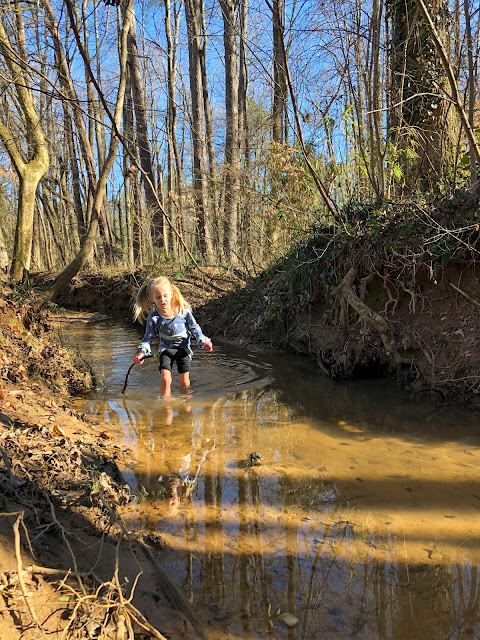 And here are the big kids showing me a big gully they'd found (whereas the banks in the area we were in where somewhat easy, this particular area had quite the cliff to climb): 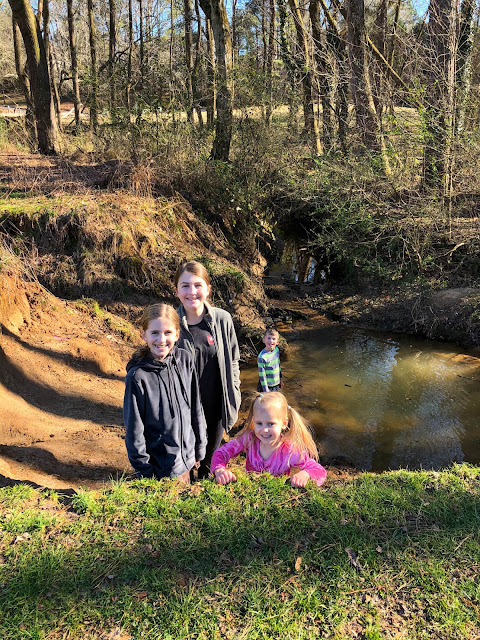 How do rain boots feel like such a luxury when I know I wouldn't hesitate to equip my children with snow boots (which in my mind are essential)? We have two whole bins of winter stuff sitting in our storage room (because I wasn't sure whether I should bring it or not; when I asked the then-Relief Society president of our Peachtree Corners ward (laughably, we aren't in that ward anymore (it doesn't even exist) and she's not the Relief Society president anymore) what I should do—give it away up in Utah where people might need it, or bring it down south with us—she said to just bring it with us because "it gets cold here, too." But honestly, I should have left it behind because we've hardly needed anything more than cheap-o knit gloves)! But somehow rain boots feel like a luxury item when they're probably more essential than all that winter stuff we have.
They'll be good for yard work—from the ordinary things like raking leaves and gardening to the not-so-ordinary things like digging trenches in the torrential wake of an autumn hurricane—in addition to muddy excursions, so I think they'll prove themselves very useful.
Plus they'll keep our shoes looking nicer longer...maybe...if my kids can remember to stay out of mud puddles with their nice shoes on...
(The title of this post, by the way, is a shout out to the Laurie Berkner band. My kids love her music! I think this version isn't the version we usually listen to, but it's still good).