We rang in 2021 pretty much like we've rung in every other year—somewhat quietly at home, with games, and treats, and midnight Martinelli's. Our game of choice for the first half of the evening was Mexican Train, which is a game I thought Zoë might want to play but she chose to draw pictures with Alexander. Those two love drawing so much that they were always eager for us to play another round so they could draw more pictures. 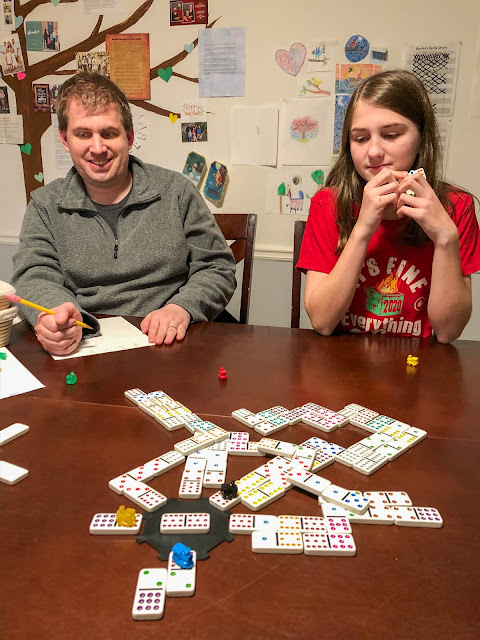 I had to take a picture of this round because Benjamin made the Mexican train angle towards Rachel rather than...what was the other option, Rachel? Himself, I guess. Anyway, she got all annoyed and huffed and puffed and rolled her eyes and then re-routed the train. So since I wasn't playing on my train at all (I'm the blue train; Miriam is yellow), I started curving the Mexican train (black) towards Rachel with a vengeance. Meanwhile, Andrew made his train turn sharply to encroach upon her territory as well. So Rachel gave up trying to protect her territory and made her train bridge over both the Mexican train and Benjamin's train. 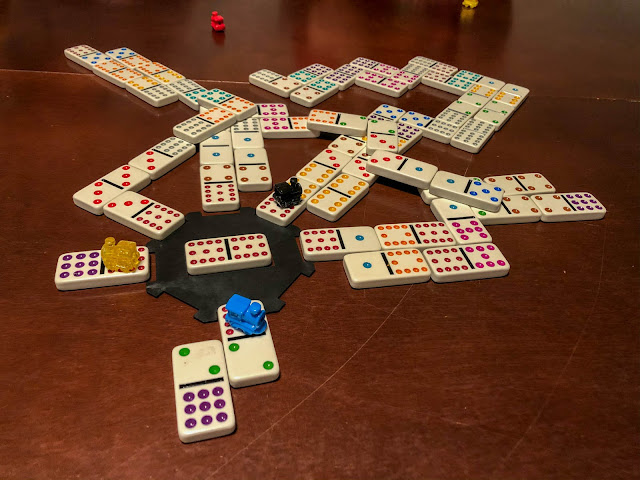 Not that we're at all vindictive over here.
After we played a few rounds of Mexican train, Zoë and Alexander kept the party hopping along. They had expectations and wanted to make sure we could fit everything in before "midnight." We managed to meet their expectations well before midnight but, as we like to say over here, they have no concept of time so it didn't matter.
Just yesterday Zoë rejoined me at the kitchen table for an activity after she'd gone to the washroom and she said, "Sorry I took so long. I just washed my hands for 21 minutes. Just kidding. I have no concept of time, so...could have been any amount of time."
We might use that phrase a little too often. But, anyway, it's true. They have no idea what time it is ever, but they knew they wanted cookies and fireworks and to say "Cheers!" before bed, all mostly very doable things.
Here they are with cookies: 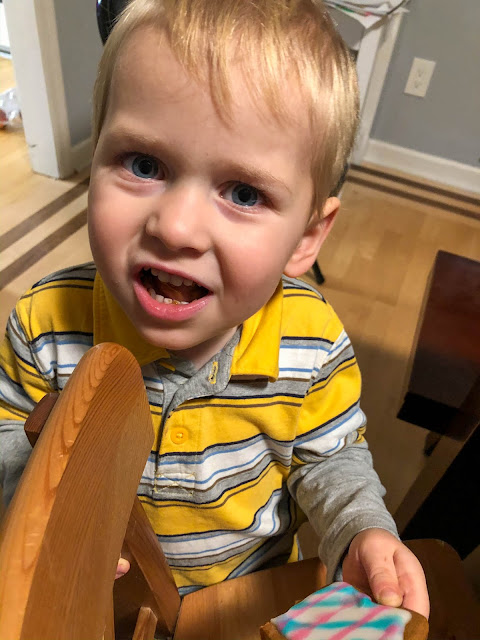 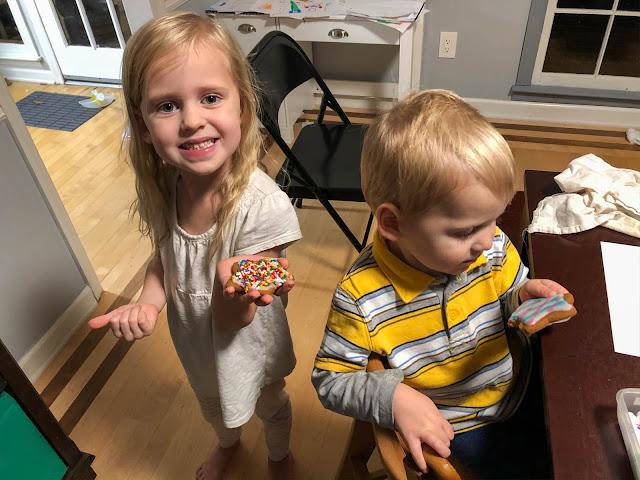 Rachel made them, of course. I don't know where the picture is of the lovely display platter she put together, but here's a sampling of her work: 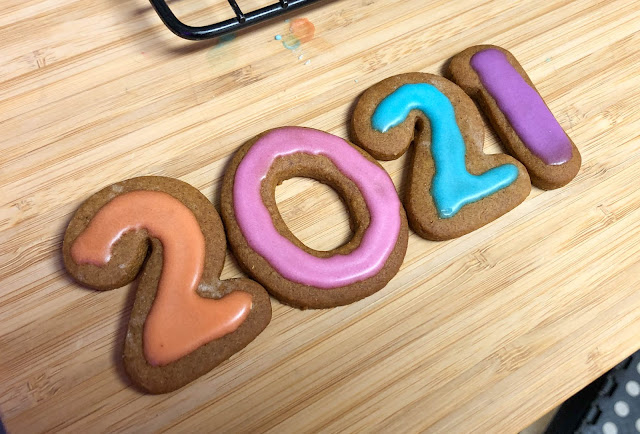 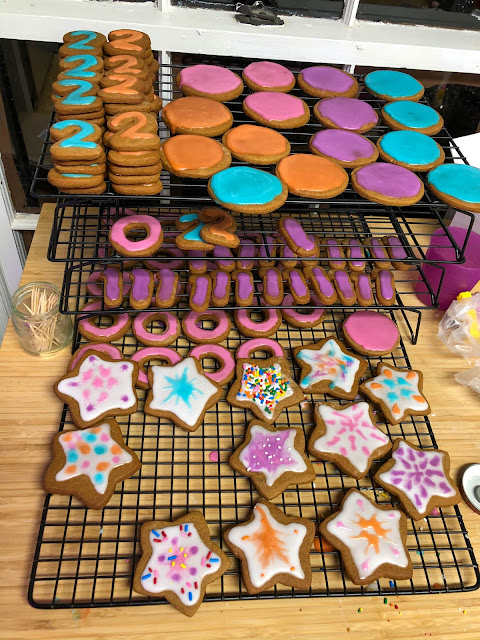 And here we are breaking into a 8:00 bottle of Martinelli's: 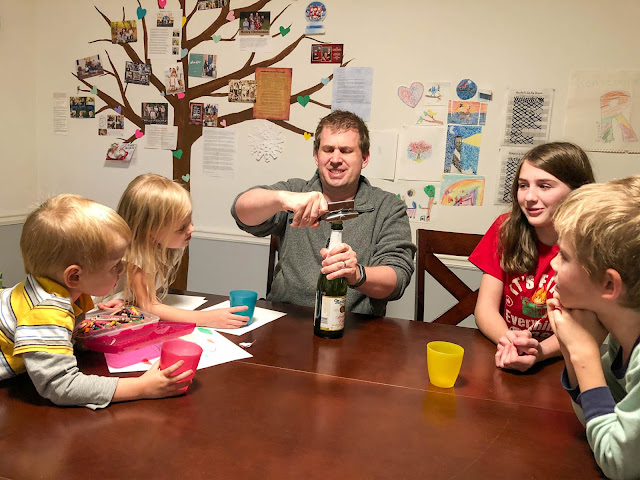 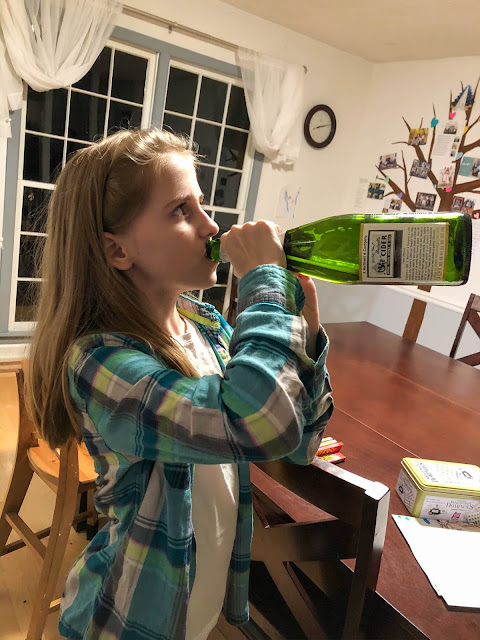 The fireworks portion of the evening was a little more difficult. It was kind of a drizzly evening but we could hear fireworks going off in the not-so-distant distance and see the clouds light up every now and again. The kids swore one of our neighbours was out doing fireworks, so although I was skeptical of this (since the last time this particular neighbour they had in mind let off fireworks, he knocked on all the doors and invited everyone to com watch/warned everyone that he intended to do so) I went out on a fireworks scouting walk with the kids.
A New Year's walk is actually fairly traditional for us, but it was drizzling, as I mentioned, so not everyone wanted to go, and those of us who did go didn't find the source of the fireworks. So we returned home to do sparklers. 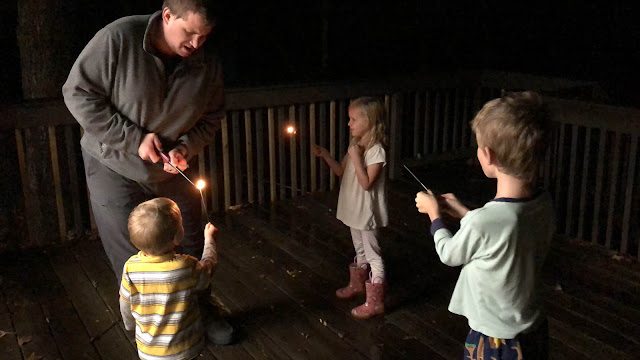 The kids are one-part fascinated by and one-part terrified of sparklers. And I can't blame them for that. 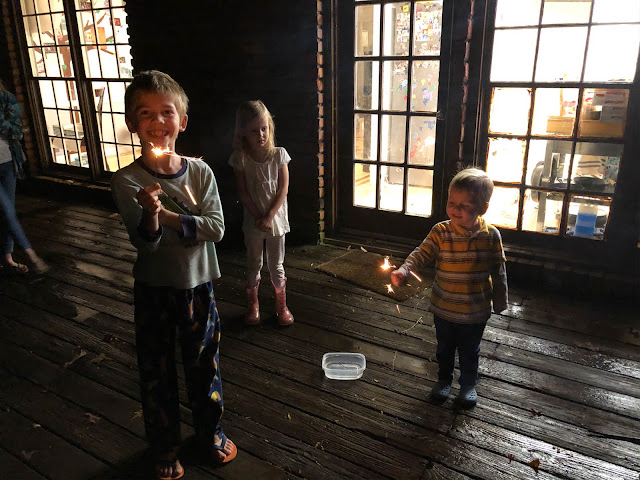 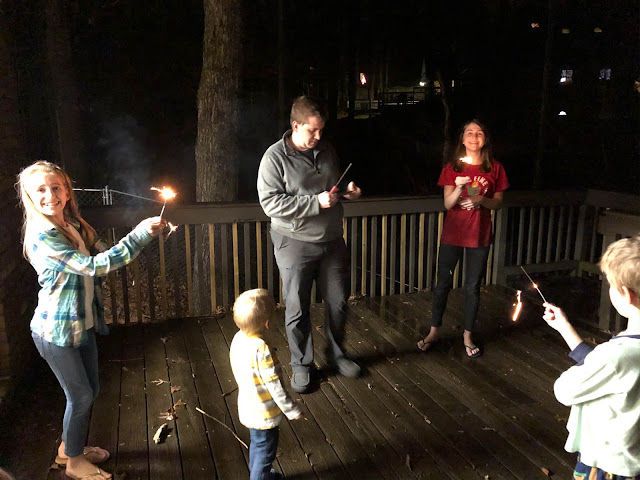 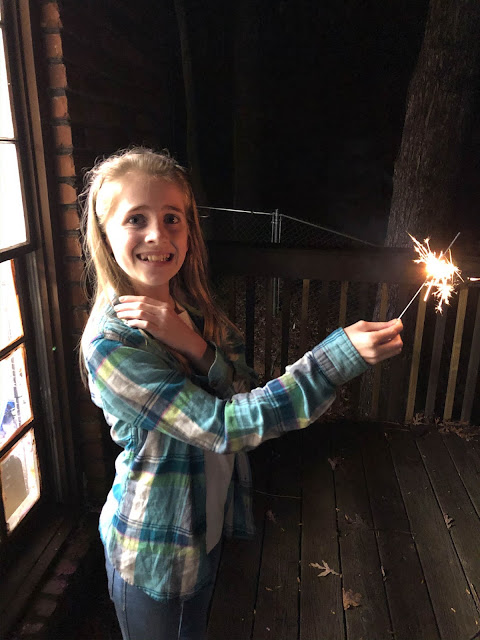 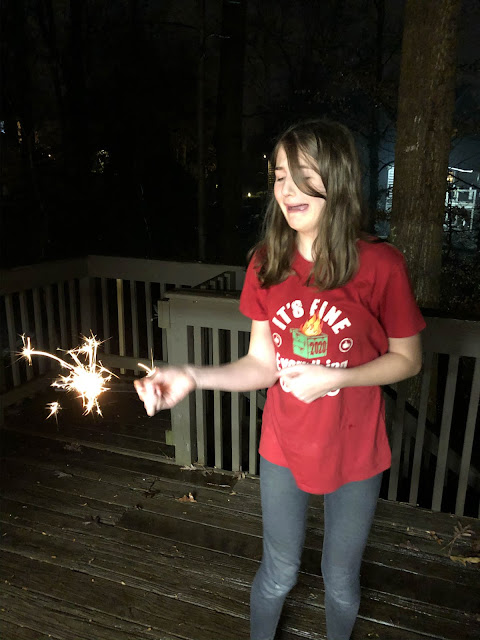 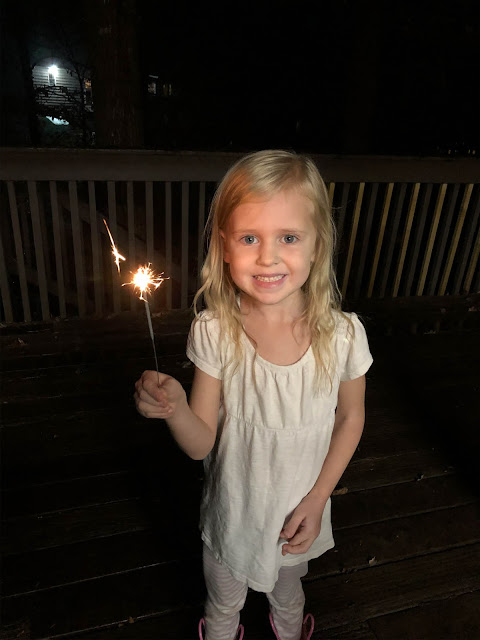 Zoë recently learned about crossing one's fingers for luck so when her sparkler started getting too close to her fingers for comfort, Zoë would quickly cross her fingers (and hold her breath for good measure) to keep stray flames from licking her fingers. It was pretty cute. 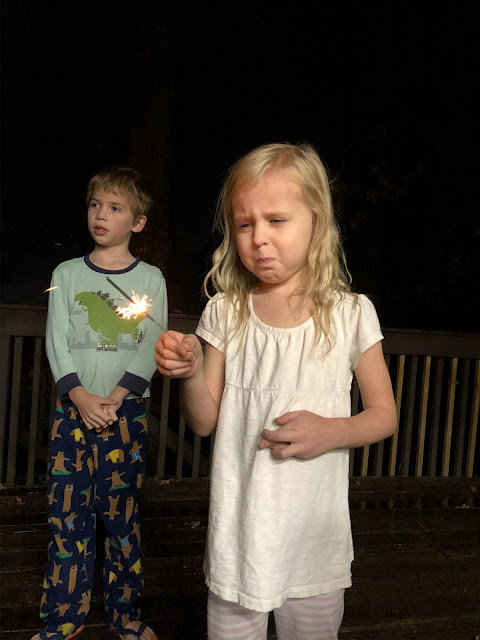 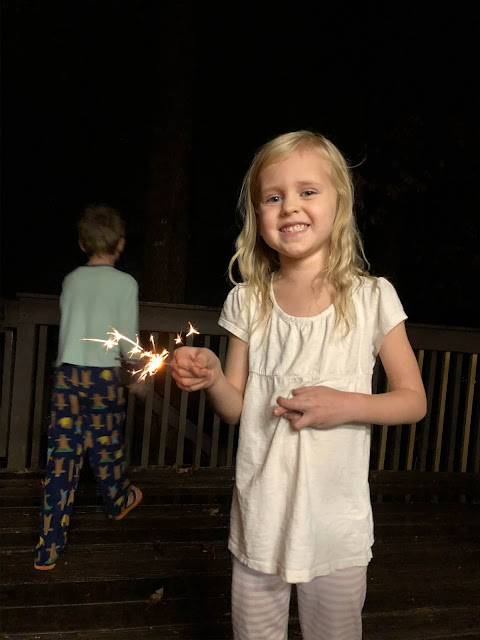 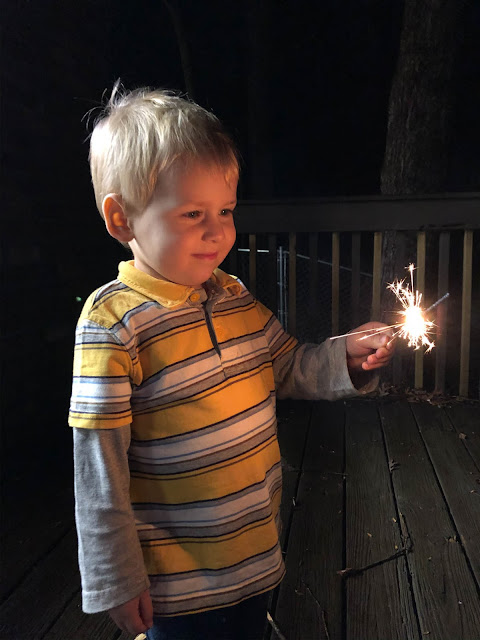 Daddy lit the last two sparklers but no one wanted to hold them, so he showed the kids how to be brave with them, waving them about in the air. I think he spelled Zoë's name for her, though I didn't quite catch the letter formations with the camera. 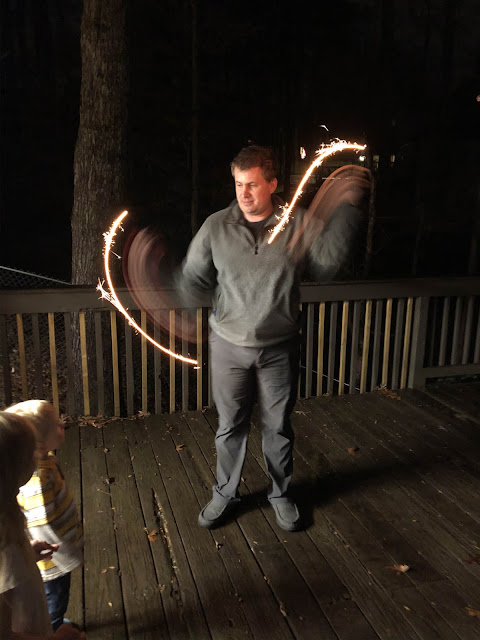 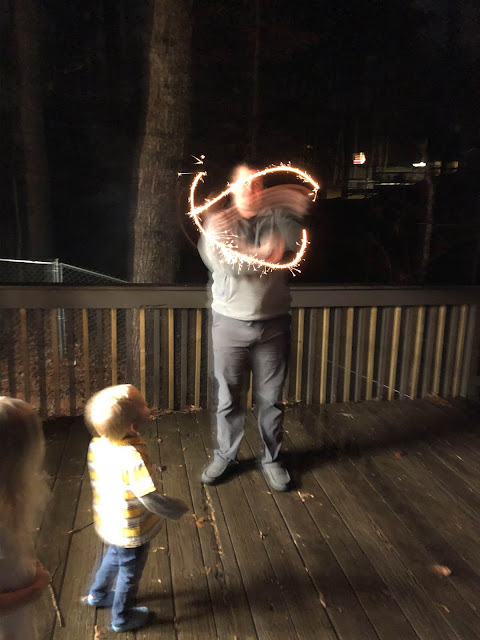 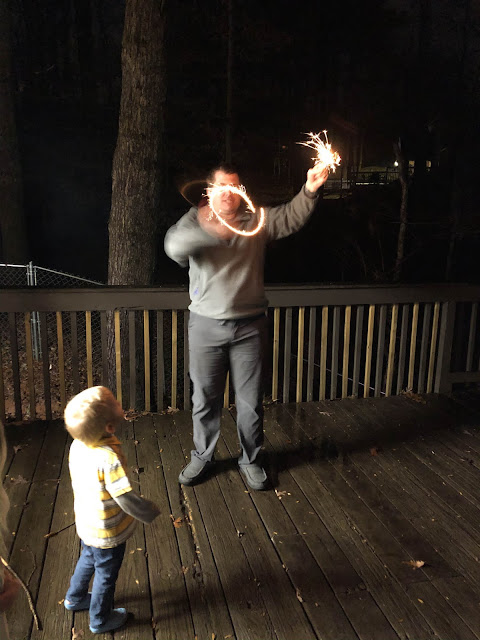 After sparklers we had scriptures and prayer and sent the two little ones off to bed. They didn't take too long to fall asleep, though they were bothered by the sound of the fireworks quite a bit. 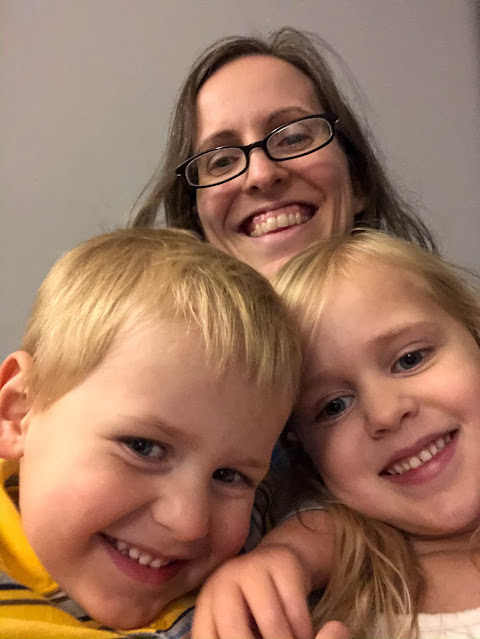 After they were asleep we played Hand and Foot. I expected Benjamin would want to play but he chose to sit by himself and watch Clone Wars, so it was just Daddy and Rachel and Miriam and me. I totally skunked everyone (though we had a rematch on New Year's Day and Rachel won). It was a very enjoyable evening.
Alexander woke up right before the stroke of midnight (by our count) because some rather enthusiastic neighbours set off their fireworks about a minute early and the sudden increase in noise frightened him awake, so here he is on my lap at midnight: 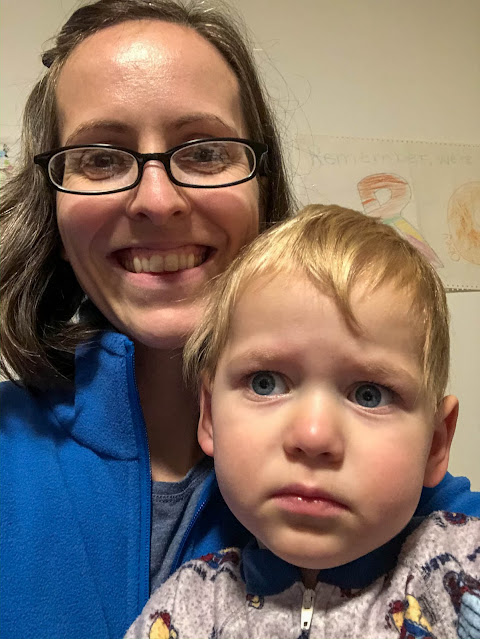 And here is everyone else preparing to toast the New Year with the midnight bottle of Martinelli's: 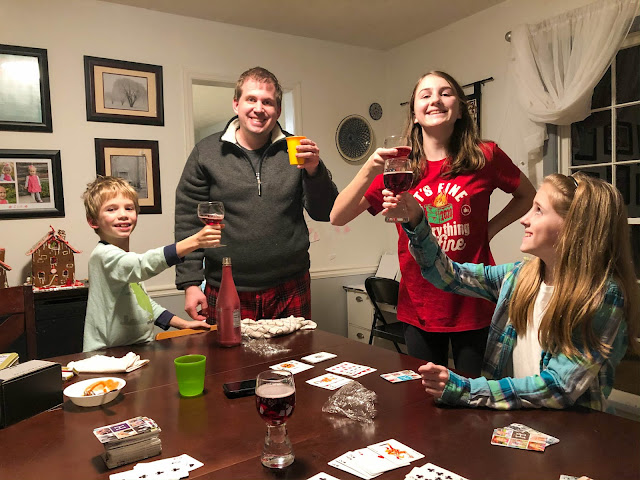 Midnight caught us in the middle of the third round of Hand and Foot, we sent Benjamin to bed and let the girls stay up to finish. Alexander sat on my lap for the rest of the round.
On New Year's Day when we hit an afternoon lull—all the little kids were playing in the basement—and we sat down to play the final round of the game. Alexander wandered upstairs while we were playing, crawled onto my lap and said, "Oh. We're playing this game again?"
It's true that we've played it quite a bit this Christmas break, but as far as I know he'd only ever observed us playing it those two times.
We had a lovely, quiet holiday. Here's to the New Year!
Posted by Nancy at 12:48 AM