Christmas Eve somehow ended up being a busy day in spite of not really having much to do. The little kids were all so excited they could hardly contain themselves, which made for some interesting personality dynamics (one talked nonstop the whole day (Benjamin), one got really aggressive (Zoë), and one kept running into things and getting hurt (Alexander)). Despite their often conflicting personalities, they kept each other entertained for most of the day.

Here they are having a pretend Christmas Eve feast: 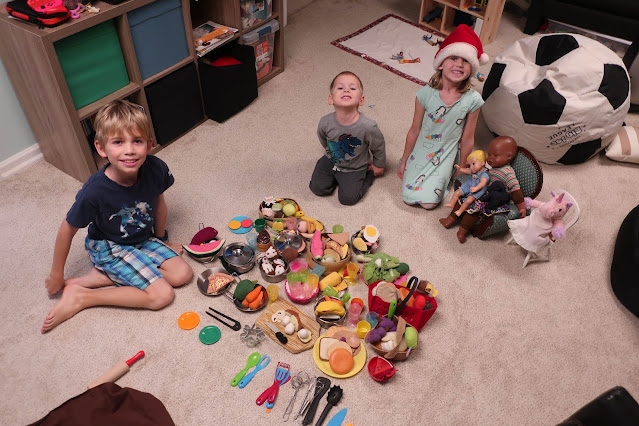 They played outside for a while on our new wall (we got a retaining wall in our front yard, by the way) and I did eventually manage to make cookies with them (Rachel did most of the holiday baking this year) and somehow to the day just slipped away. Zoë and Alexander spent the whole day asking if it was time to put out cookies for Santa. I spent the whole day telling them it was not.

Those two concocted some pretty wild theories about Santa from all the books and movies we've consumed over the past few weeks. For example, here's a little conversation Zoë and Rachel had...

Zoë was showing off some "toys" the kids had made out of things from the recycling bin and told Rachel, "We're going to leave these toys out for Santa because—the poor thing!—he never gets to play with any toys! He just gives them all away."

Zoë just about went ballistic. "YOU DARE SAY THAT ABOUT THE PATRON SAINT OF CHILDREN!!!?!?!?!?!?"

"He's not old. He's dead. It is his spirit that goes around each Christmas.

Here Alexander jumped in to say, "You know—like that movie with the villain? It's true!"

"That could be literally any movie," Rachel pointed out, but Alexander evidently did not care to elaborate.

"The Christmas Carol," Zoë said. "The one with the three spirits."

"Oh, I see. I was thinking about Klaus. So Santa must be the Ghost of Christmas Present, then..."

Zoë shot her a withering look.

Rachel threw her hands up in the air. "Sorry..."

"So, how do you know all this stuff about Santa?" Rachel asked.

Later she brought Rachel a stack of books to look through so that she could learn a thing or two about Santa. Today someone maligned Santa Claus and Zoë again said, "You dare say that about the patron saint of children?!" and then tacked on, "And sailors!"

Anyway, we had latkes for dinner. That probably took quite a bit of the day. I wouldn't know. Andrew made them with the kids while I took a nap with Phoebe. Speaking of Phoebe, here are far too many pictures of her in her adorable Christmas outfit: 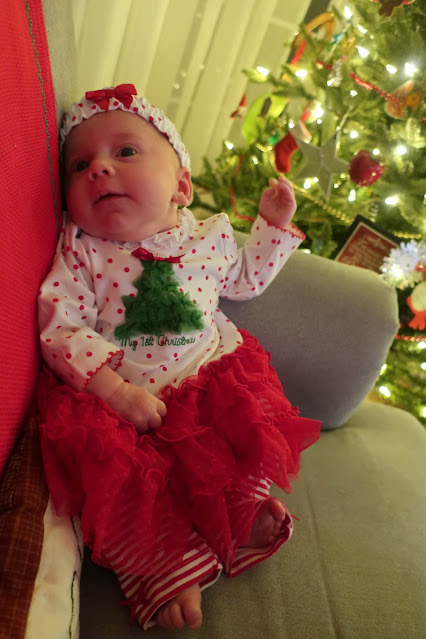 Our dear friend Linda Rich (from our D2 ward) sent it to us (along with a few other sweet outfits). It's still a little big for Phoebe, but she looked darling anyway (and we couldn't really wait to wear it since it proclaims that it's her first Christmas and it's much tinier than the outfit I'd ordered online (and reluctantly returned)—that outfit was big enough to fit Alexander even though the tags said newborn)).

She was actually a little scary to perch on the couch like this: 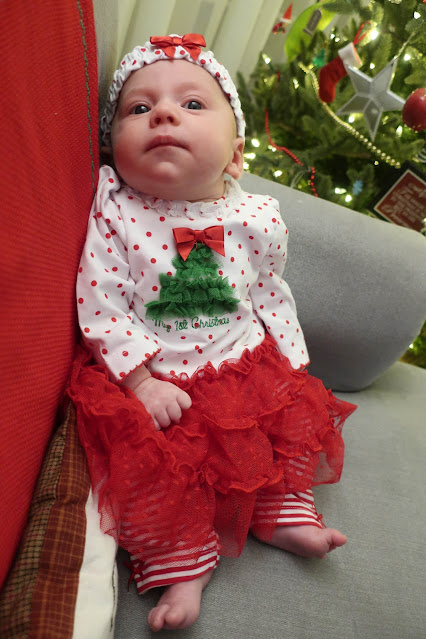 Because she didn't want to be there at all (she hates not being held by humans) and kept throwing herself forward (which is really hard work): 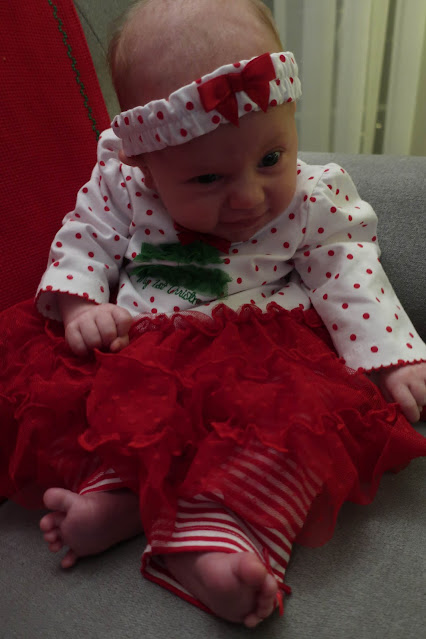 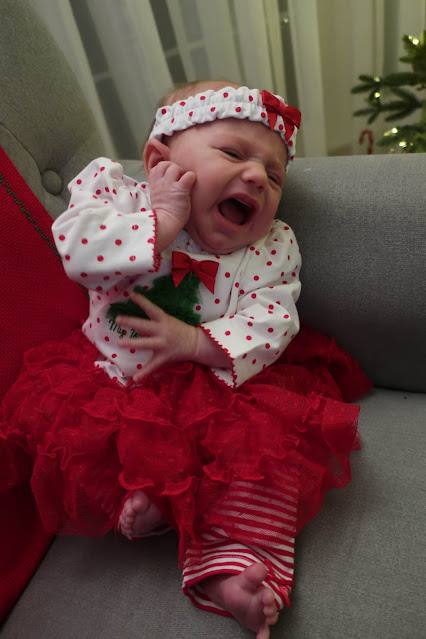 She did eventually settle down for a few pictures. She must have realized that she had no actual plan for what she'd do if she managed to get off the couch and decided she should just chill out and enjoy the view. 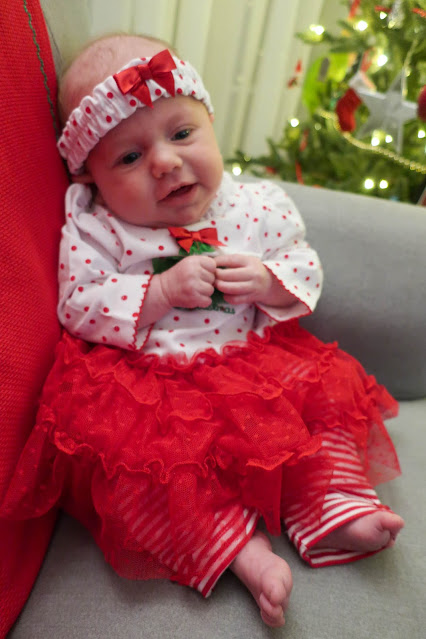 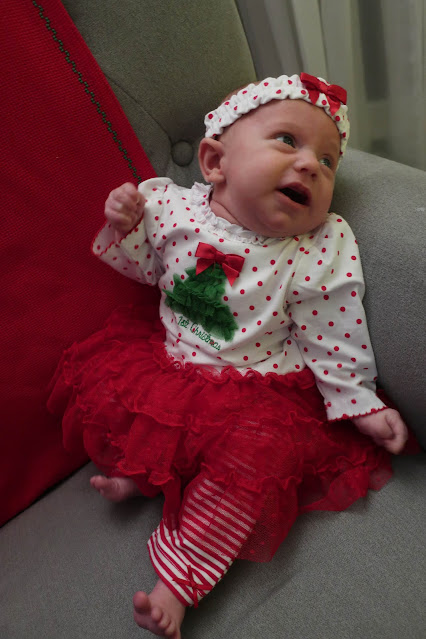 We got pyjamas for the kids. This hasn't really been an overt tradition at our house until last year and this year and, honestly, that makes sense. We never leave the house and my kids would happily live in pyjamas. I don't know what it is about pyjamas that makes them better than clothes...especially when my kids have "comfy" clothes (leggings and t-shirts and things). But...it is what it is. They really like pyjamas. 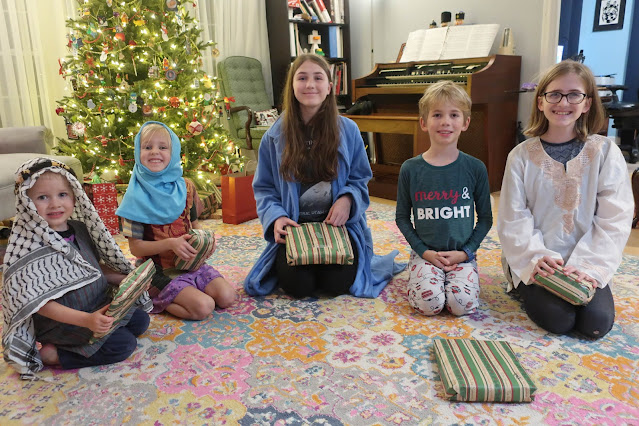 I still chuckle (sadly) when I remember how Rachel declared she was going to live in pyjamas until the pandemic was over. Ha! We were so naive back then. Now here we are, old pros at navigating a global pandemic (from our couch, in our pyjamas)... 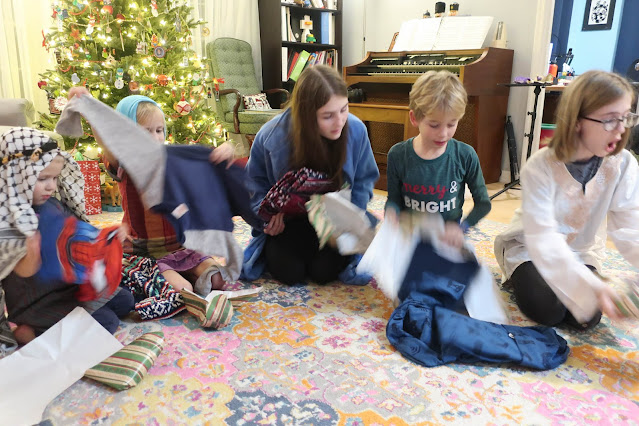 They were all rather pleased:

They were also excited to act out the nativity (with a live baby): 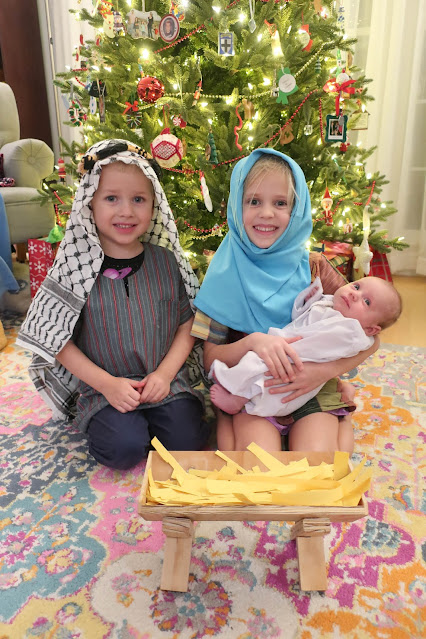 Phoebe was actually wide awake—and rather grumpy!—the whole time, which made things a little difficult for Mary, who, of course, was played by Zoë. Alexander was a little sensitive about these details. When I suggested that "Joseph" could put his arm around "Mary" he glared at me and said, "I'm still Alexander. You can just call me Alexander, okay?" 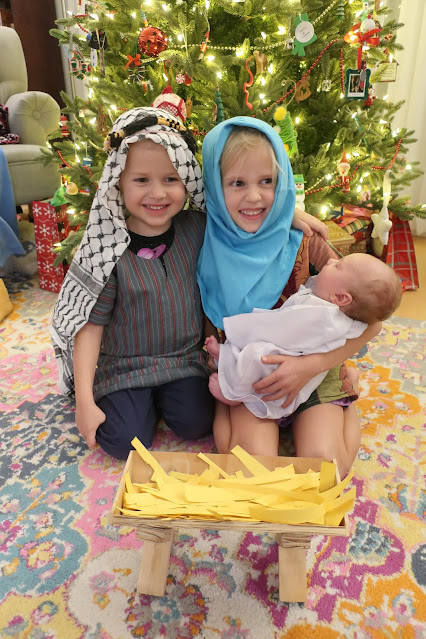 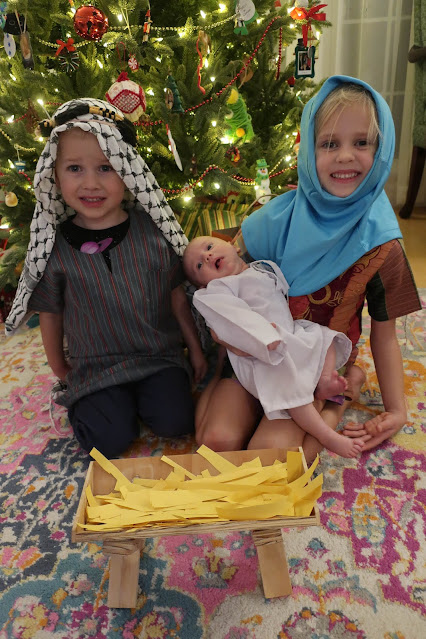 Miriam reprised her role as the angel: 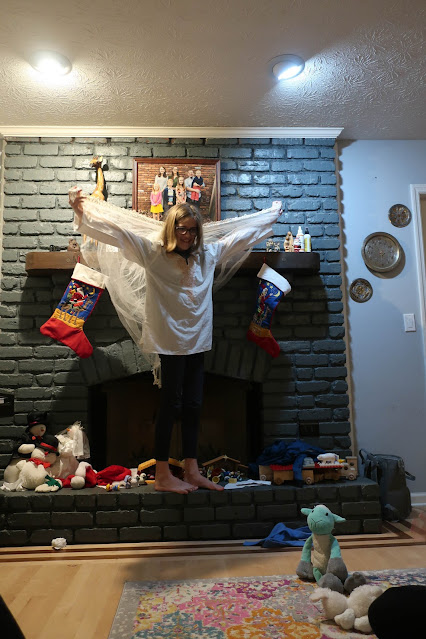 The shepherds did an excellent job of acting sore afraid: 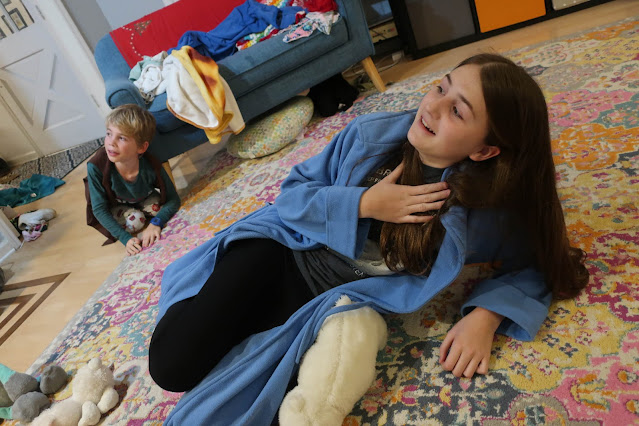 Here they are approaching the stable in Judea long ago: 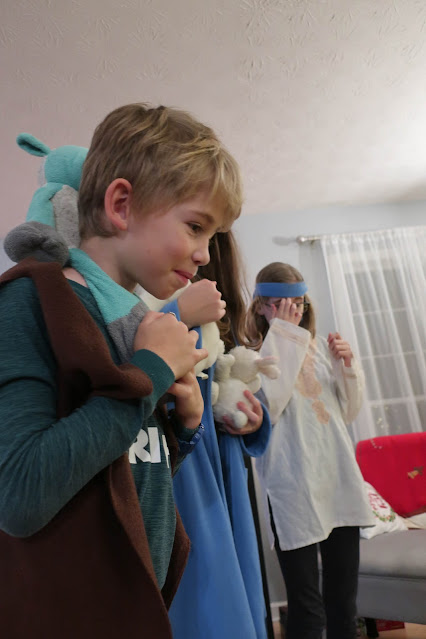 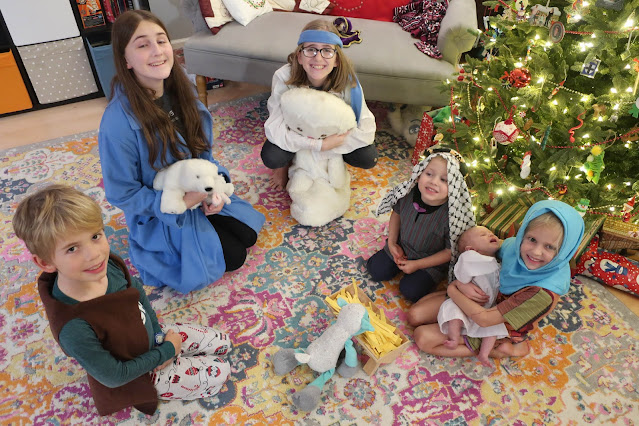 And, of course, later the wisemen came. Benjamin erroneously believed the Wise Men were actually assassins who were seeking the Baby Jesus to murder him but somehow dropped their weapons along the way so then didn't end up murdering him and "departed another way." So I was glad that we could iron out the details of the story—the Wise Men had been watching for a sign for the Saviour's birth, they followed the star, King Herod wanted the baby killed but he didn't tell the Wise Men that. He simply asked them to report back to him after they'd found the baby so that he could dispatch someone to kill him. But once they found the baby they were warned to depart without returning to King Herod.

No assassins in this story. Here are the Wise Men delivering their gifts: 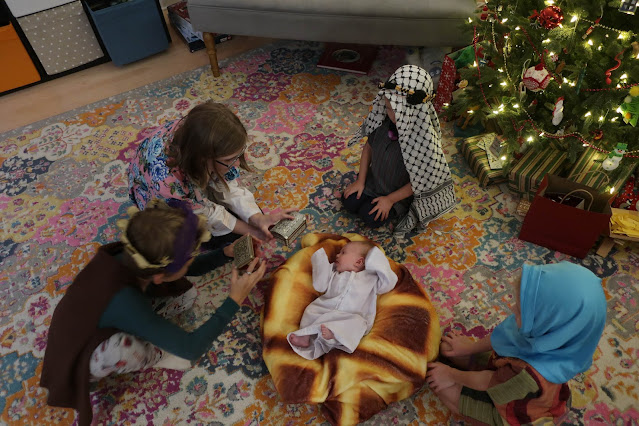 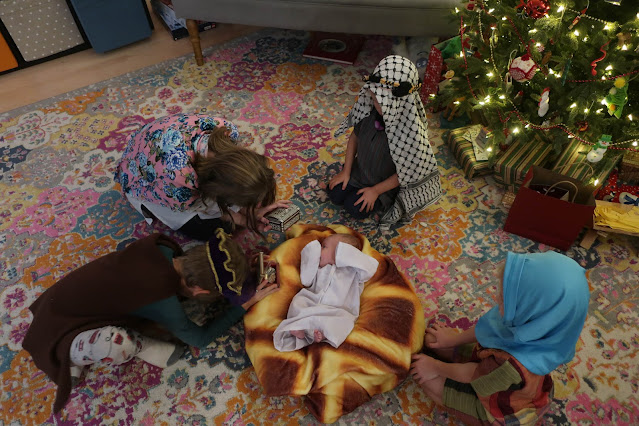 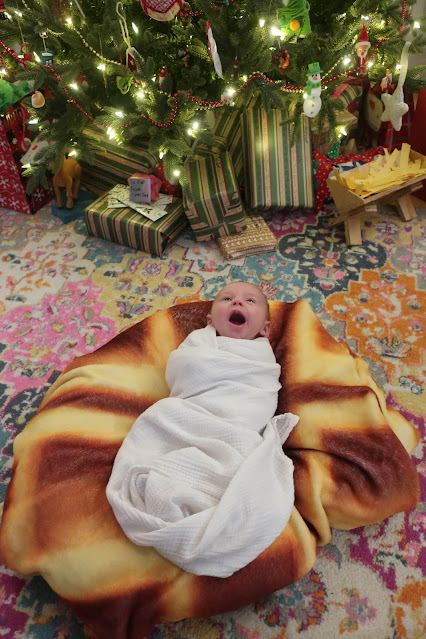 We sang a few carols together, snapped a few pictures, and then sent the little kids to bed...after leaving out milk and cookies and carrots, of course. 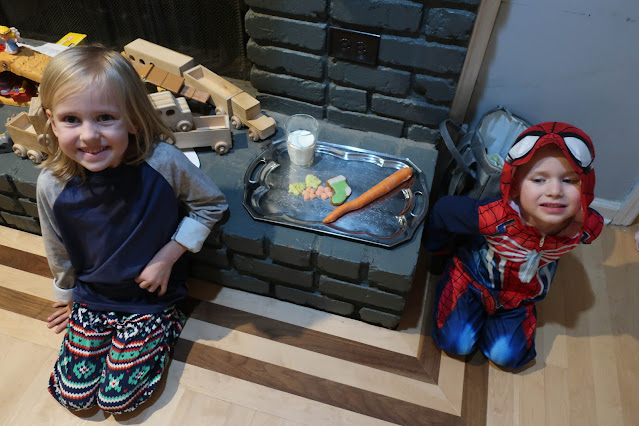 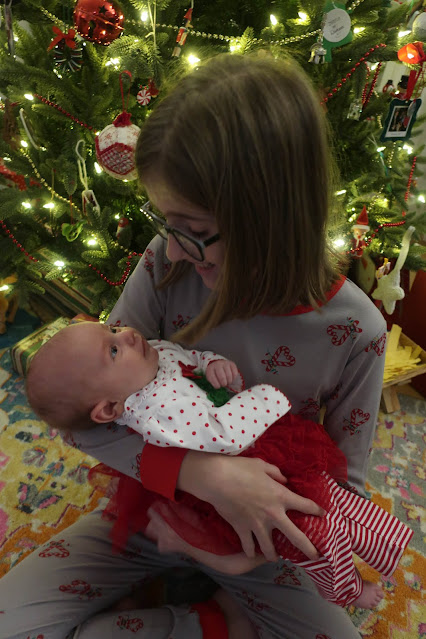 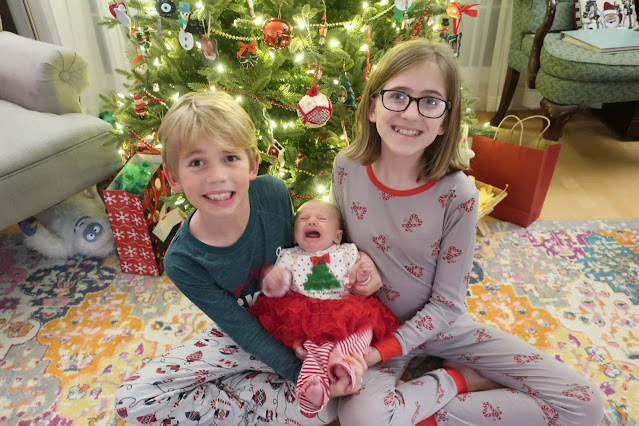 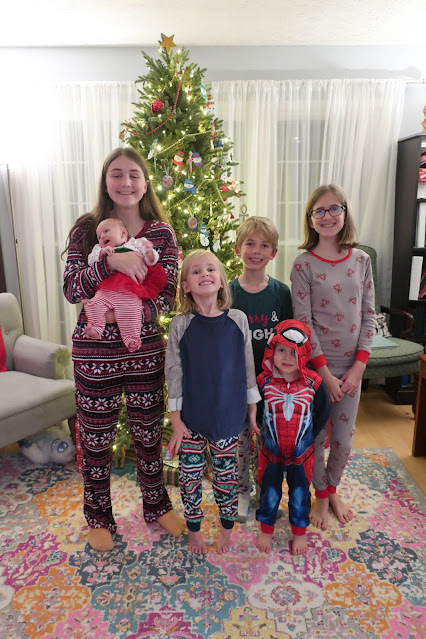 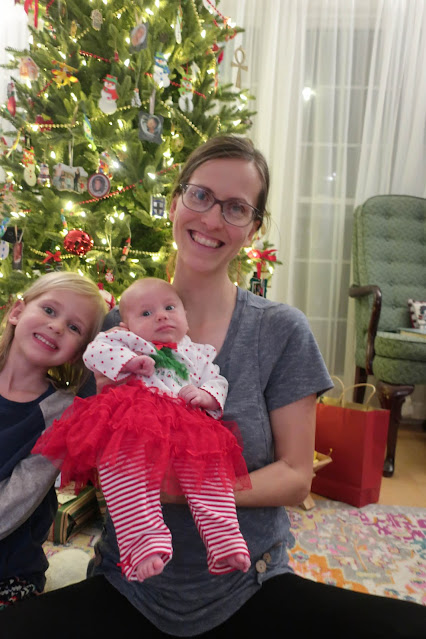 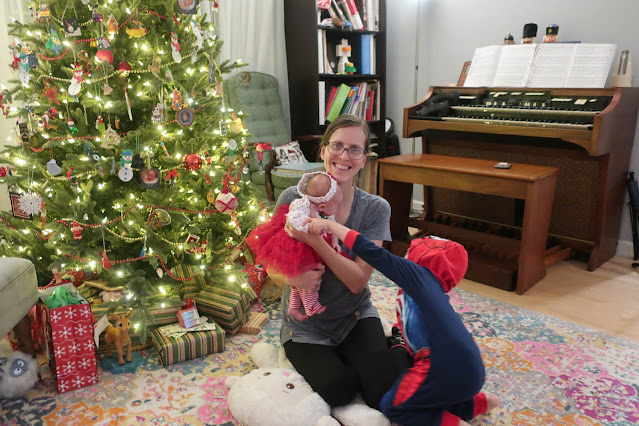 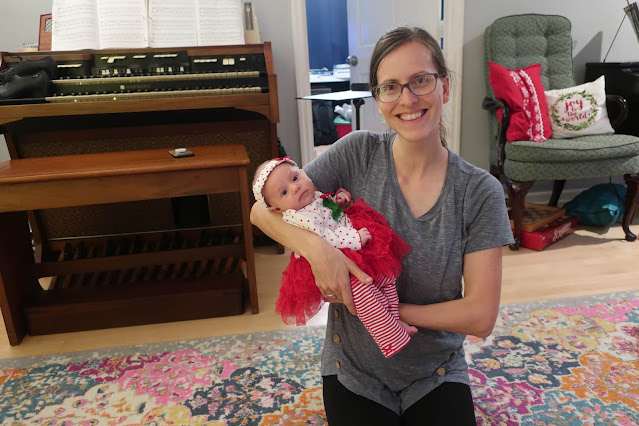 We didn't get around to doing everything we wanted to do, thanks largely in part to this sweet thing: 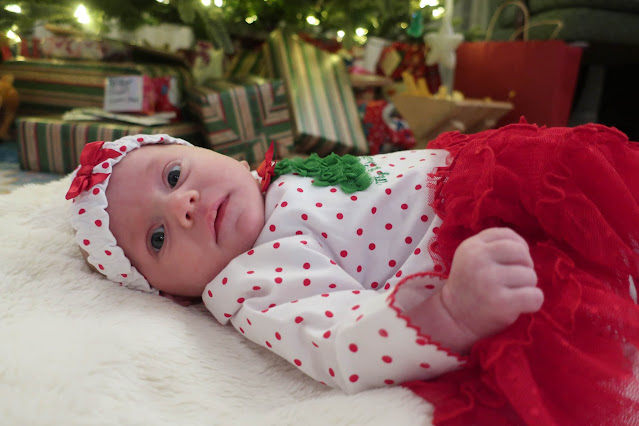 But that's okay because she made Christmas feel magical in its own way (mostly just by making me cry at the drop of a hat because she's so beautiful and perfect and definitely our last one and how did Mary travel that far just to give birth in a stable and...).

We didn't, for example, find time to go Christmas-light-looking. Rachel suggested that we could, but Andrew reminded her that Christmas Eve gets really busy with all sorts of traditions.

"Yeah!" Alexander interjected. "We can just take the baby in her baby seat. This can still work!"

"...so we might have to not do everything this year."

The children didn't think that was a great idea.

"I'll tell you what," Andrew said. 'We can walk to the crazy Christmas house after dinner."

That felt fair to everyone, so that's what we did...only we were rather disappointed because the crazy Christmas house didn't have any lights up at all. In ordinary times I might not worry about that but in present times I have to wonder if they're okay...

Fortunately there were several houses with fun holiday displays along the way so the kids weren't remotely disappointed. And there's something a little exhilarating about taking a brisk stroll in the cold night air.

Ordinarily we also watch It's a Wonderful Life on Christmas Eve as well, but that's another thing we had to give up on this year. It simply was too late to start a movie by the time we were ready to start one. So instead we sent the little kids to bed downstairs for the sibling sleepover (Rachel and Miriam turned their room into a winter wonderland, with paper snowflakes dripping from their ceiling and Yule logs crackling on the computer screen). Then we played a quick game (quicker than It's a Wonderful Life) with the big kids (including Benjamin).

And that was Christmas Eve. Pretty low key over here. Yet somehow also busy...