To resolve yesterday's stories about footprints all over my floors, I offer this picture: 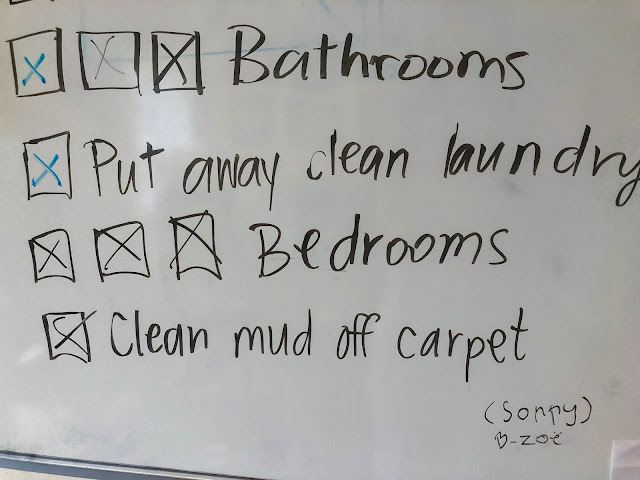 We had a long list of chores to do today (longer than what is shown here) and included among those was cleaning the mud off the carpet (a task we didn't quite get around to yesterday).

Funny enough, Andrew was the one to sleep in this morning. I figured he was pretty worn out from how hard he'd worked on the yard the day before, so we just didn't wake him up. But I made the list of chores and began leading the kids through the chores. When Andrew got up, however, he almost immediately called the kids together for a family meeting.

"Here's the plan," he said. "We need to do some chores today—we're focusing on bedrooms and..."

"You stopped us from cleaning our bedrooms to have this meeting," the kids told him.

"Yup," I said. "I have a list on the whiteboard. We've already been knocking things off."

Soon he sent me off to have a nap with Phoebe while he finished leading the kids through the rest of the chores. When I woke up everything on the list had been crossed off and...Zoë had left that sweet little note of apology in the corner of the board.

She's a lovely child (even if she leaves footprints all over my house).

We went for a walk soon after Phoebe and I woke up. The big girls took Phoebe and the little kids off on their own, so Andrew and I were left to walk together (which is fine because that's about the only time we're ever alone these days).

"I know we said we'd have perogies for dinner for New Year's," I said. "But I think we'll maybe do, like, a New Year's Day dinner and tonight we can just do all the snacky things we planned like little smokies and a vegetable tray and..."

"That ground has been covered," Andrew told me. "We planned it all out while you were napping."

Meanwhile, up ahead of us, the kids were on their own walk, having their own conversations.

I'd tucked my phone into the stroller with Phoebe when the kids decided they'd go off without us...for "just in case" (but also because I didn't have any pockets and didn't want to carry it the whole way and had been planning on pushing the stroller myself).

When I got home Miriam rushed to meet me and said, "Thing I learned: pram is short for perambulator and not prambulance!"

Their "just in case" moment, as it turns out, was looking up the meaning of "pram."

We've played a lot of games the past couple of weeks. The other night we played UNO with the kids, which is a game everyone (except Phoebe) can play...but our family is so big we might need to start using two decks because when we finish dealing there aren't a lot of cards left in the draw pile.

Anyway, I think Rachel won the first round and Zoë just melted down. She was furious and sad and way too emotional. We were trying to talk her out of her funk so we could play another round and she sobbed, "But I was planning on winning!"

"We were all planning on winning," someone pointed out to her. "That's how games work!"