That one time Zoë walked into a garbage can

Yesterday was garbage day, but it was also a beautiful day, so I took the little kids for a walk while their big sisters stayed at home to work on some projects. That's when we really stopped to examine this tree, which we know is an oak tree because we've seen it when it's leafed out. But there aren't any leaves on it right now and we were just so curious about this lump of greenery in its branches.

After determining that it was mistletoe, we had a lovely discussion about kinds of symbiosis, since mistletoe is a parasite. Zoë was afraid the mistletoe had flat out murdered this tree, but then we reminded her about the whole deciduous vs. evergreen distinction. This tree is very much alive (though the mistletoe is acting as a parasite, parasites don't always kill their hosts). 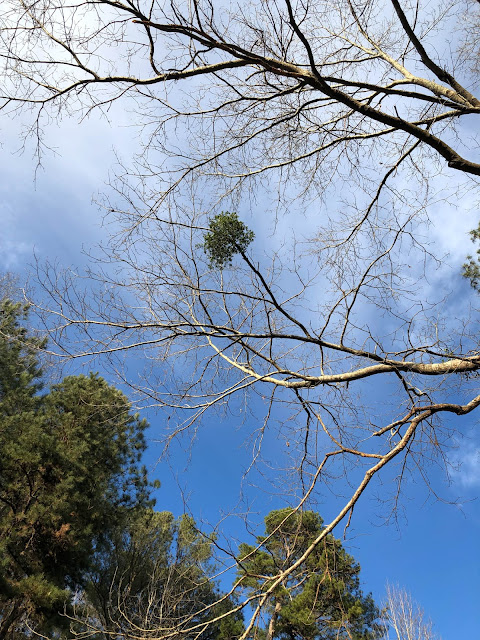 We stopped underneath it to offer Phoebe's sweet, kissable cheeks some kisses: 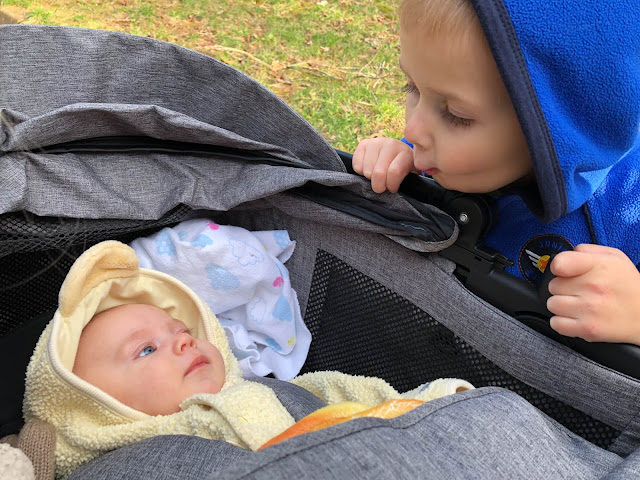 We turned the corner onto a busier street, where the garbage cans were lined up for trash collection. Because it's a rather busy thoroughfare, the garbage cans were sitting on the little strip of grass between the road and the sidewalk, and because this is Georgia, the little strip of grass isn't quite wide enough for a garbage can to sit on (other places I've lived have a much wider strip of grass; at least as wide as a sidewalk typically is) so the garbage cans were taking up some of the sidewalk.
Initially this was fine. My children tend to run helter-skelter while we're walking, so having to dodge garbage cans was right up their alley, so to speak. But then our direction shifted so that we were walking directly into the late-afternoon sun, which was blindingly bright.
As wonderful as sunshine is, I sometimes wonder about that invention—here's a source of heat and light for you; it's necessary for life on your planet, but don't sit out in it too long because it will cook you; also...don't look at it or you'll go blind.
Like, whose idea was that?
Anyway, we were having a hard time seeing where we were going because the sun was just being so sunny! I was squinting and trying to push the stroller with one hand while shielding my eyes with the other hand and I just figured that the ambulatory* children were taking care of themselves.
Zoë was walking right beside me and we were forging our way forward into the blinding light when suddenly—BAM!—Zoë was no longer beside me!
She had crashed headlong into a garbage can, giving herself a lovely little black eye (a very little black eye; just some slight bruising and a little cut). Poor little thing! 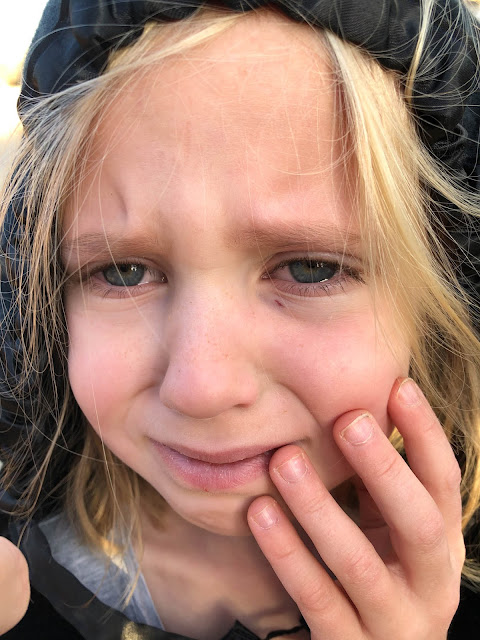 Benjamin and I had trouble trying to be sympathetic without laughing about it...because the whole situation was rather humorous...but we also knew that she was physically hurt as well as embarrassed...so in that sense the situation was very, very serious.
Today on our walk all the kids were helping Zoë feel better by telling her about all the dumb stuff they've run into over the years: mailboxes, parked vehicles...
For me, it was a chainlink fence (I was running alongside my friend at recess one day and she had a clear path while I was headed straight for a stretch of fence; never saw it coming). Laughing at everyone else's mishaps made her feel a lot more comfortable with her own.
We all do dumb stuff!
* Did I blog about how Miriam thought "pram" was short for "prambulance" when really it's short for perambulator? Same root word, so nothing to be embarrassed about really, but prambulance is just such a funny word!
Posted by Nancy at 12:48 AM