Thursday and tree climbing and things

I promised myself I would write about last Thursday, which was a very good day. It would have made sense to write about that last Thursday or even this Thursday, but here we are on Saturday.
Last Wednesday night Phoebe chose to stay up very late and I stayed up with her because Thursdays are Andrew's long days on campus. He's gone before the sun is up and doesn't get home until around 11:00 pm. So he can't very well be up with the baby all night. But even though my duties are more home-based and my schedule is a little more flexible, that doesn't mean that staying up half the night with the baby isn't exhausting.
Phoebe and I went to bed around 4:00 in the morning, when she'd finally tuckered herself out, and I was surprised when we woke up to the sun streaming through the window at 9:00 am (a lovely sleep-in).
Still tired, I dragged myself out of bed with Phoebe and we went to check on the kids.
They had quite the surprise for us! All three little kids were engaged in their school work. They raced to show me their math lessons, all of which were executed beautifully. They'd all had breakfast. The dishwasher had been emptied. The floors were being swept. They'd been practicing the piano...
It was amazing! Such a treat!
Not every day is like that, but Benjamin (in particular) has been working on being more mindful of his daily to-do lists and making sure his work is done well.
Here's a seemingly boring shot of his math work from the other day: 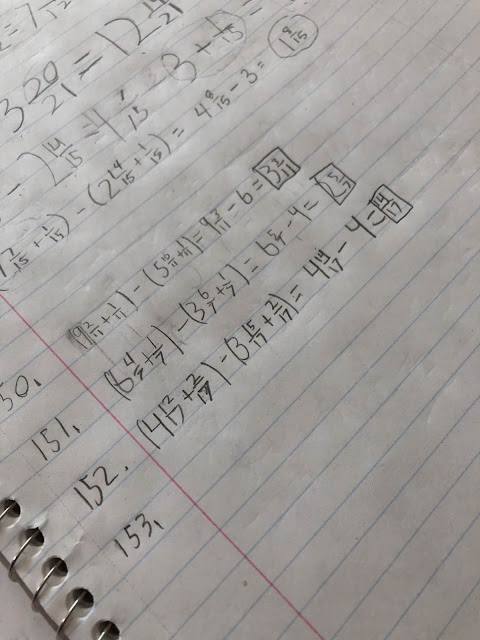 Boring...but proud...because he was doing the work and showing his work, and because of that he was getting correct answers. This is a huge thing for him. I feel like younger grades tend to push the idea that you should be able to do all your work in your head—answer quick, no fingers! And that's great for simple addition, subtraction, and multiplication questions. But it's less great when you're working on multi-step problems. I've been hounding this boy to write down his thinking for ages and he's finally understanding why!
(Even if he ends up with the wrong answer, it saves us time when we go through things and notice where he made a mistake or wrote something down wrong or whatever).
Anyway, that was last week. This week the kids didn't surprise me by waking up and moving through their daily lists on their own one single day, but they were pretty cooperative most days and we got all of our work done. It's also been beautiful outside so we spent quite a lot of time at the playground this week.
The kids are obsessed with climbing trees lately, including this one in the yard that really is not fit for climbing. The poor branches are so spindly; they aren't designed to hold children and yet...there are multiple children in this tree: 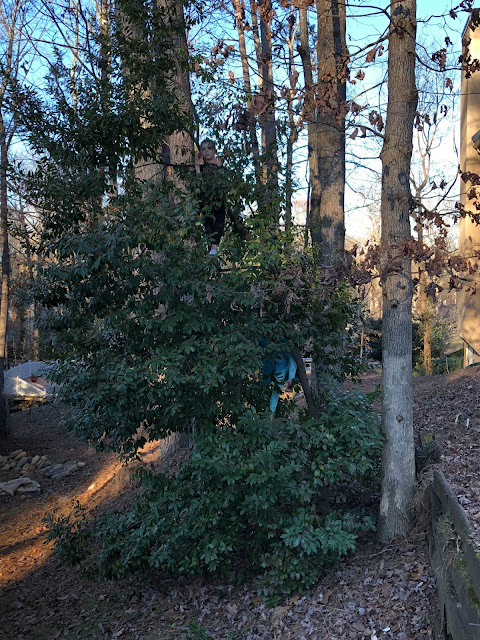 Zoë fell out of it one day, hitting just about every branch on the way down (and scraping up her chin), so we're hoping it wasn't the stupid tree. Perhaps it was the brilliant tree or the beautiful tree or the kindness tree or something like that.
Anyway, here are the kids climbing some recently-pruned crape myrtles at the park: 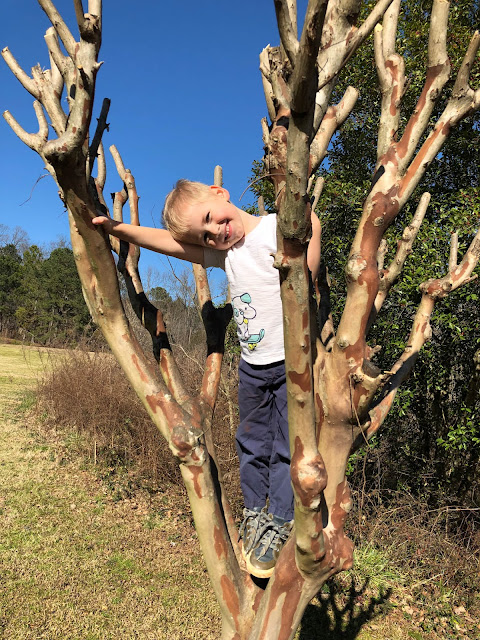 Alexander had it easy because I gave him a boost. Zoë and Benjamin had to figure it out on their own: 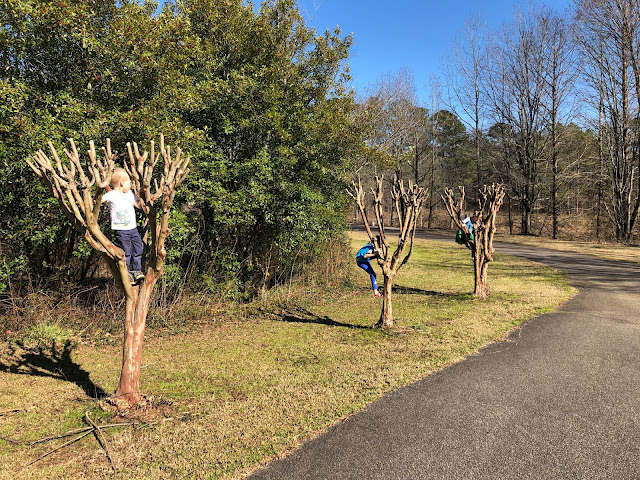 Here's Zoë up in her tree: 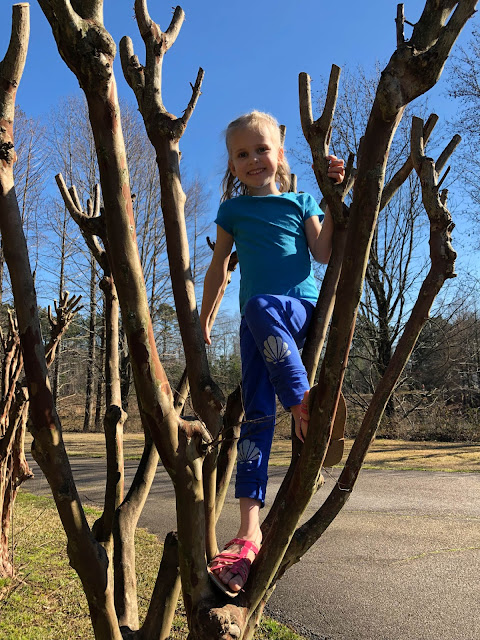 And here are all three of those kids—Alexander, Zoë, and Benjamin—up in their trees, looking like a scene straight out of The Sound of Music: 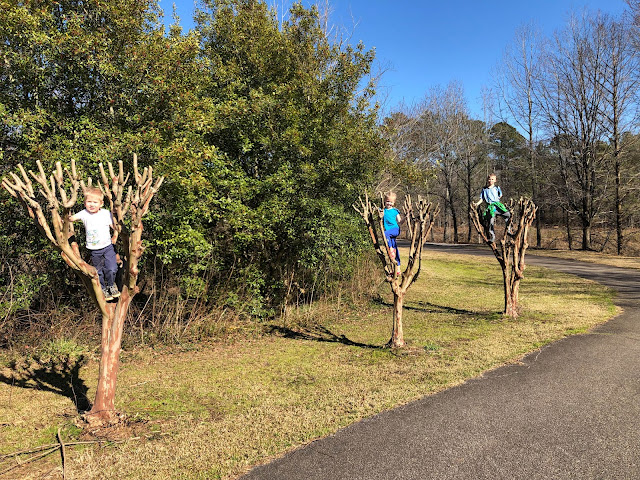 Zoë and Alexander were quite the pair with her chin all scraped up from falling out of the tree and the big cut over Alexander's eye. 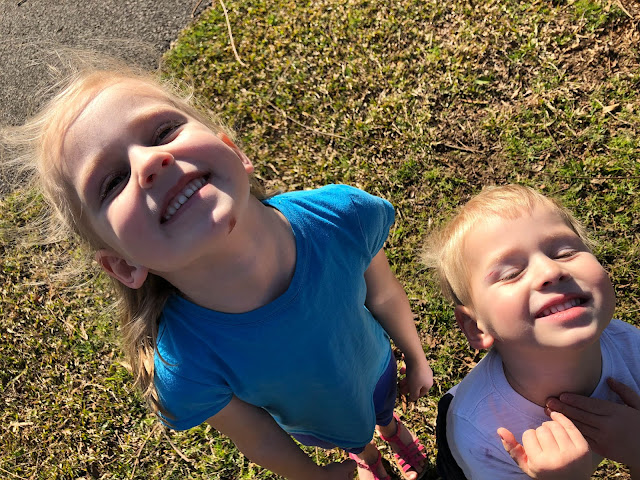 I believe this particular day at the park was a Wednesday. I had been in a meeting that morning and had left the kids a list of things to accomplish while I was in my meeting. One of the things was for Zoë to sweep the floor.
She used to be in charge of emptying the dishwasher but begged and pleaded to be put in the big-kid chore rotation, so we did. And it's been fairly miserable because she's young enough to not be all that helpful yet. Having her be in charge of dishes meant that...she wasn't actually in charge of dishes. Having her in charge of scooping the cat's litter box meant that...another person would have to help her.
Recently she asked if she could simply be assigned sweeping because that was something she could do and I've never been more grateful to take a child out of the chore rotation!
So she's permanently on floors now, Alexander is permanently in charge of emptying the dishwasher, and the oldest three cycle through the more grown-up chores.
Anyway, all that is to say that I often end up sweeping the floor a second (or a third) time after Zoë is finished, and sometimes it gets neglected altogether. So I put "sweep the floor" on Zoë's list of things to accomplish while I was in my meeting.
This is a tricky job because in order to sweep the floor well you have to pick everything up off the floor, so she was in the middle of tidying up the entry way and had pulled out one of the shoe bins so she could put shoes in it...and then had picked up the shoe bin and was making her way over to the closet so she could put the bin back...when Alexander came running around the corner and ran smack into the shoe bin.
I heard the screaming from behind my closed door, but it soon stopped so I figured everything was taken care of.
When I came downstairs after my meeting, I was quite alarmed to see Alexander with a gnarly black eye.
"What happened here?!" I gasped.
"What do you mean?" Andrew asked.
"Alexander's eye..."
"What do you mean?"
"He's got a big gash* over his eye..."
"What?!"
"Didn't you hear him screaming?"
"I did and I said, 'Be quiet! Mom's in a meeting.'"
"You didn't check on the screaming?"
"He stopped screaming so I figured everything was fine."
It doesn't look so bad in this picture (by the late afternoon), but when I first saw him it was quite an angry welt.
* I said gash, but his skin didn't quite break open, so it was really just a bump.
Anyway, those two were quite the pair. And after playing outside for something like five hours, they went inside looking (and smelling) like wild, outside children. Andrew saw Zoë, with leaves sticking in her hair, and all her million scrapes from falling out of the tree, and dirt on her clothes, etc., and he said, "Wow! You look...neat."
And then Alexander came inside looking very much the same and Andrew said, "You also look...just...great."
Haha! They were very much in need of a shower!
Lastly, here are some pictures of Phoebe trying out the swing at the park. 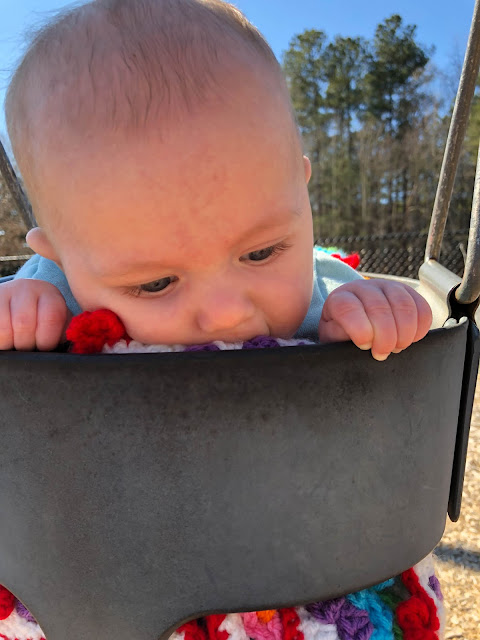 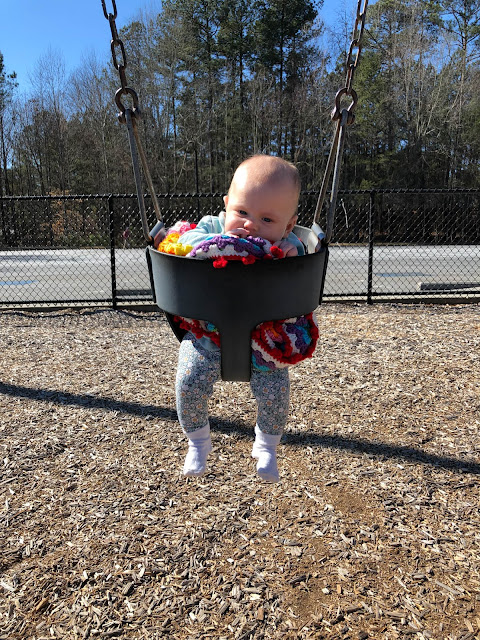 She was rather aggressively chewing on her blanket and when she realized it wasn't going to give her milk no matter how hard she sucked at it she got really angry. 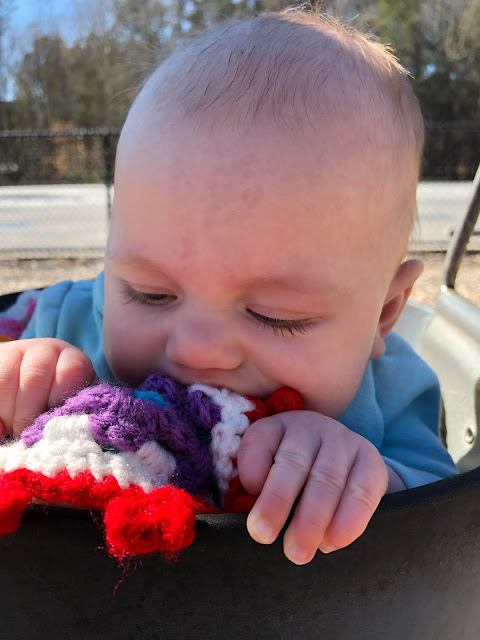 And then she nursed and fell asleep. She slept on the picnic blanket. 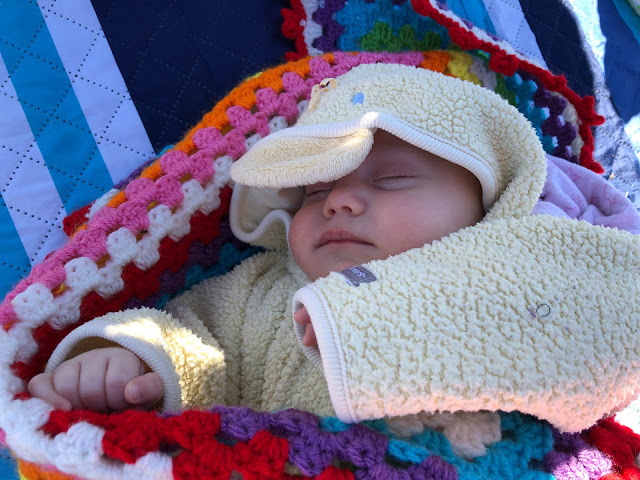 And she slept in the stroller... 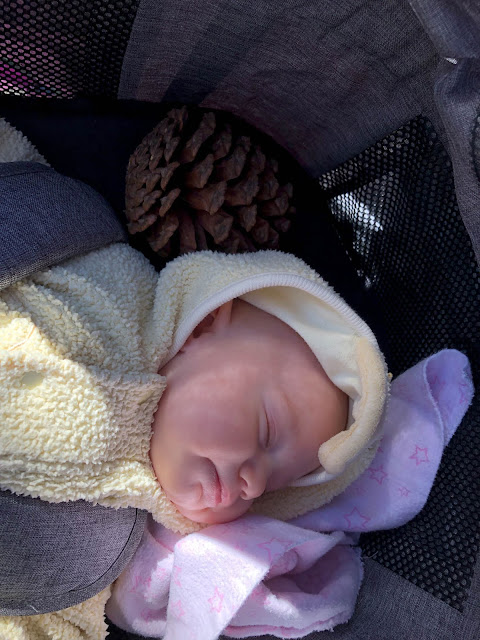 ...and she slept all the way home, and she slept when I transferred her into the house, so I took a little nap with her. And then she woke up to eat and fell asleep again. And then she was pretty much just ready for bed.
"Why is she so tired?" I asked Andrew. "Like, the other kids were running around like hooligans all afternoon. They climbed trees, they did laps around the pond, they played in the sand, they rolled down the hill... Phoebe just...got held...did a little swinging...and then slept. How is she so worn out?!"
"Well, it's a rough out there. The wind blew on her. The sun shone on her. That's a lot when you're little."
And, really, I suppose it is.
Like, for example, with COVID and so many things being indoors—virtual schooling and so forth—more children are being diagnosed with near-sightedness. Something about being outside is beneficial to how the brain learns to use light and distance for vision (as far as I understand these papers I've read) and when kids miss out on that they end up with vision problems. And, I mean, no judgement here—I'm super blind! I'm just saying that although physically the afternoon shouldn't have been taxing for Phoebe, perhaps it was developmentally taxing with all that sun and wind and stuff.
Posted by Nancy at 11:36 PM