Today I was a great mom...for Zoë

I think I'm typically a pretty okay mom, perhaps even the okayest mom. When you're a mom to this many little people (and perhaps no matter how many little people), it's tricky to be a really good mom all of the time to everybody because everybody—including me—has different needs/desires and it's impossible to meet those needs/desires for everyone all the time.

And that's okay because I don't think everyone needs their every whim to be fulfilled.

But, today I was an excellent mom for Zoë, and that felt good.

It started in the morning when all the "upstairs" kids ended up in my room while Phoebe and I got ready for the day. They filtered in one by one while I was changing her diaper and then because she was so entertained by seeing her siblings and they were so thrilled to be entertaining them, we just hung out in my room for a while, making towers out of the "baby cars" Alexander "passed on" to Phoebe because he decided they're too babyish for him.

And because Phoebe was so interested in these car towers, I took a few moments to actually do Zoë's hair. I can't remember when I last really did her hair, but I'm certain it's been at least a couple of months. I carefully brushed it and braided it for her and she liked that because she likes to feel fancy and it had been a long time since she has had fancy hair.

Zoë was particularly thrilled that she and Phoebe's pyjamas matched! Their pyjamas had not matched at bedtime last night but due to a particularly wet'n'wild night with Phoebe (necessitating a wardrobe change), they did match in the morning.

Here's Zoë spending some time with Phoebe on her play mat after she cruised through her math lesson (and while I helped Benjamin with his math lesson): 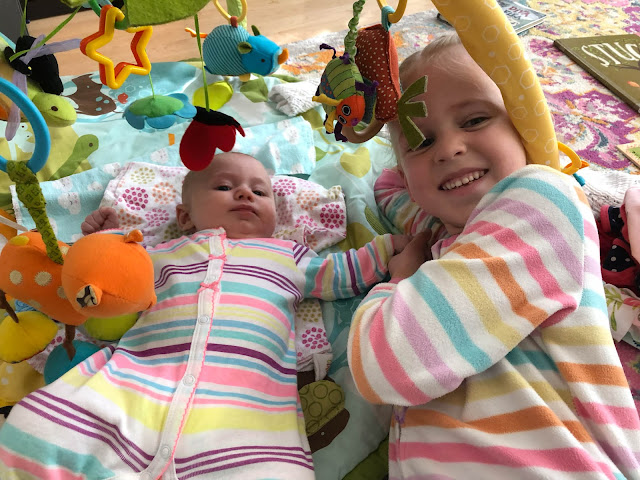 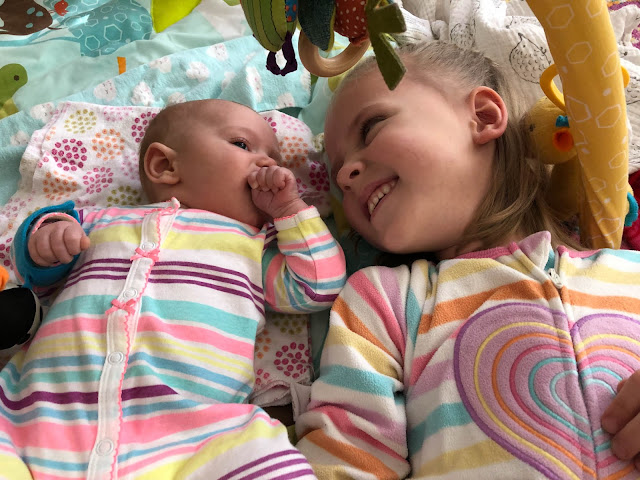 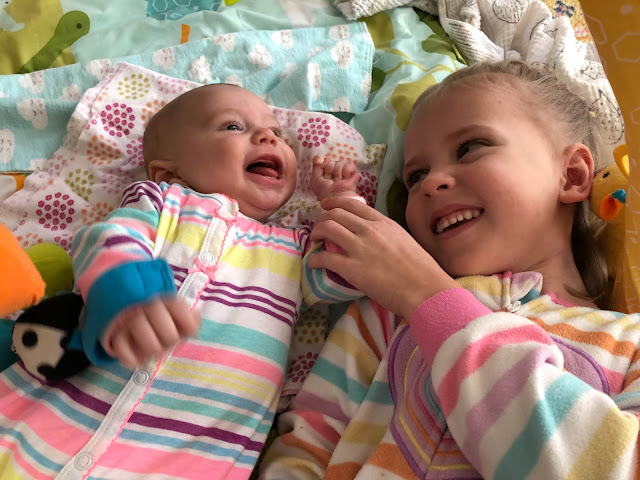 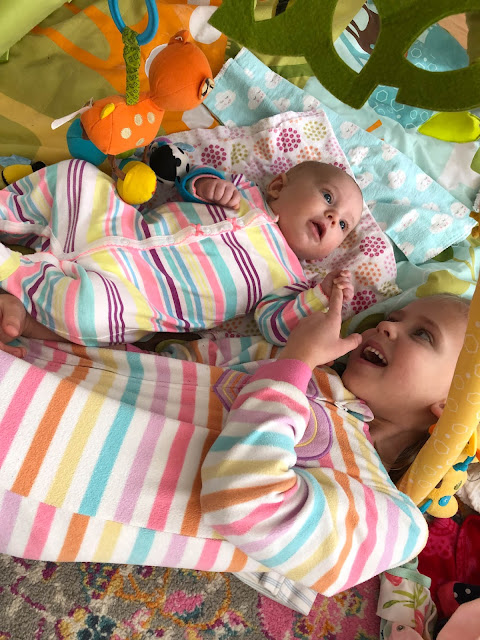 Phoebe fell asleep while I was talking on the phone with...someone...I'm not sure who it was. I spent a lot of time on the phone this morning. My sister Abra and I talked for a long time, which was lovely, and then my nephew Deklan and his fiance Holly phoned up soon after. It was nice to get to talk with them, as well. Holly has a daughter Zoë's age, so we're planning on having these girls to be penpals. 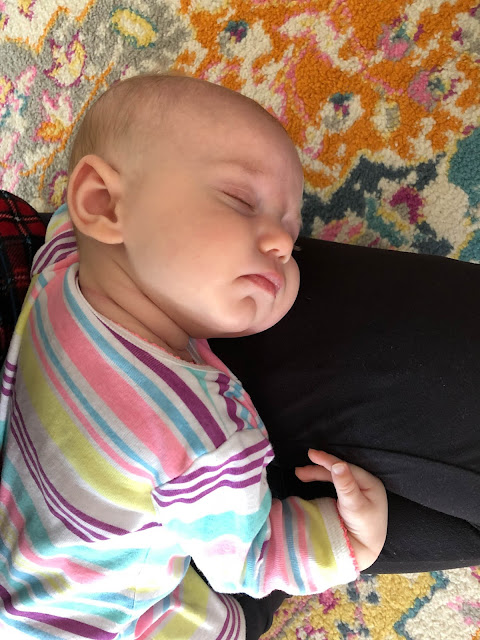 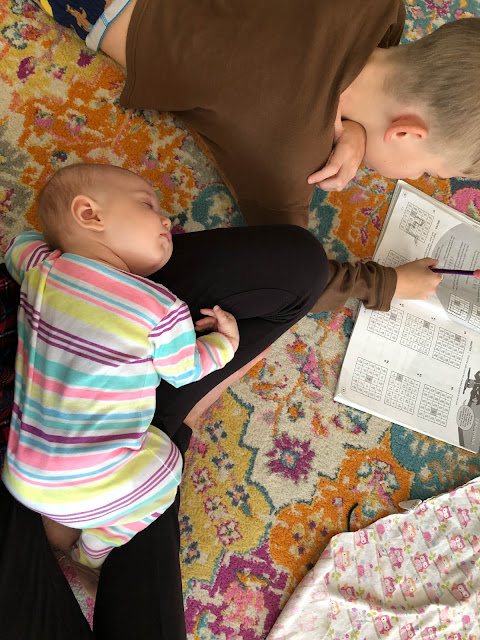 The kids all ate leftovers for lunch while I finished up my second phone call of the morning, and then it was time for me to have lunch. Phoebe was still sleeping so I transferred her over to Zoë (who loves, loves, loves to snuggle sleeping Phoebe) while I got some lunch for myself. 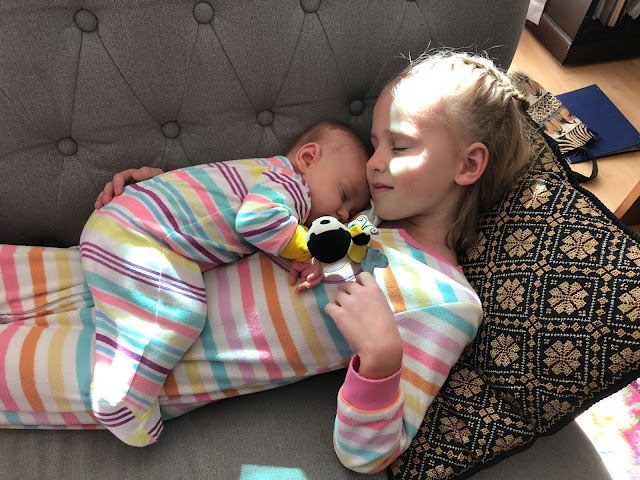 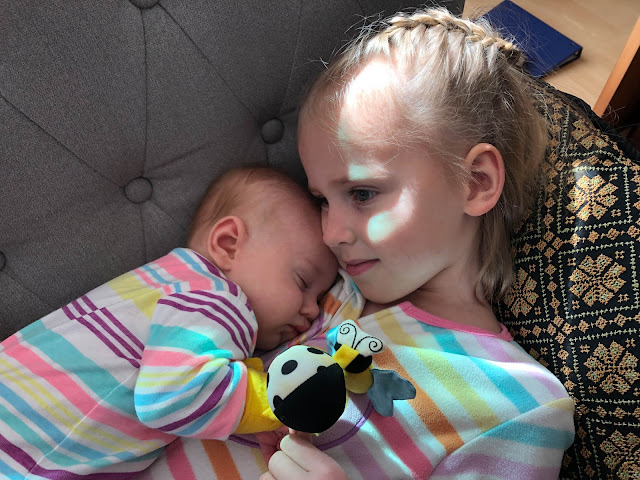 Zoë thought it would be funny if Phoebe was still asleep on her when Daddy came home from work (he gets home early on Tuesdays) and then she could trick him into thinking Phoebe had disappeared because she was so well camouflaged. 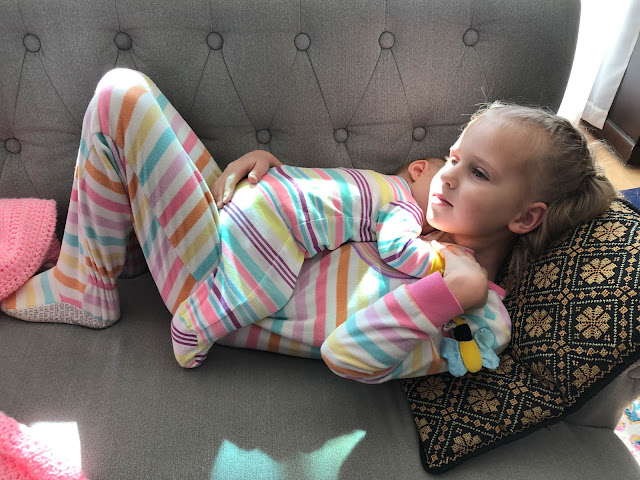 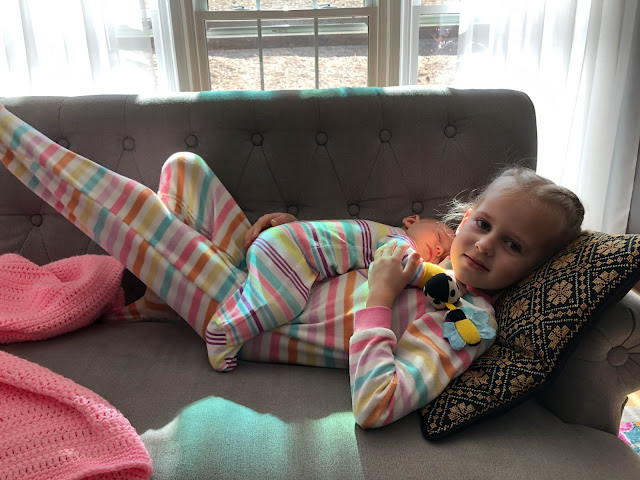 That plan didn't pan out, however, because Phoebe woke up mere minutes before Andrew arrived home and was squawking quite loudly by the time he walked in the door, so her location was pretty obvious. 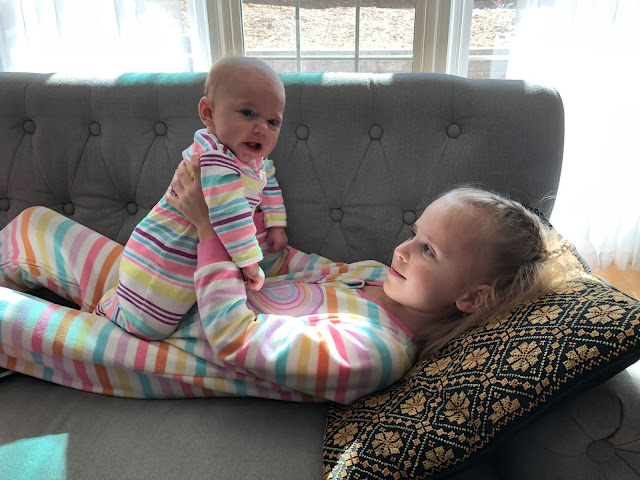 When we finally convinced Zoë to get dressed so she could play outside, she emerged from her bedroom dressed head to toe in pink. Alexander quickly went to his room to dress head to toe in blue so they would match. He was hoping they could wear their matching shoes (they're each on a pair of white runners right now, both hand-me-downs from Miriam's cheer days), but Zoë decided to wear her pink sandals (with pink socks) instead, so Alexander put on his blue shoes. 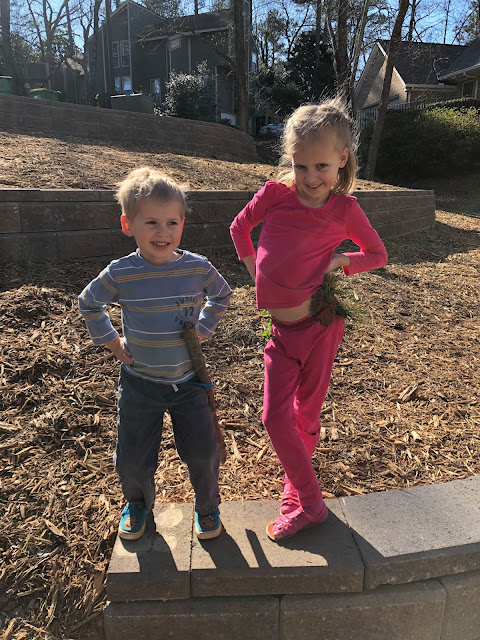 They both have headbands around their waists, with stick-swords and magical herbs tucked in for safe-keeping. They were quite the sight!
Zoë really enjoyed our walk today. Yesterday's walk was a little rough (more on that later), but today we stopped under the mistletoe and Miriam gave Zoë a kiss on the cheek, which made her feel important. Stopping by the mistletoe might become a tradition (we have weird walk traditions—like tickle bushes, for one thing, and the fact that we name our walks (such as "The Hobbit Walk," which is a "there and back again" walk, "The Loop," which is...not the same as The Hobbit Walk, and so forth (in North Carolina, our walks were designated by the number of speed bumps we'd hit on our walk)), so adding a little mistletoe kiss is right up our alley). 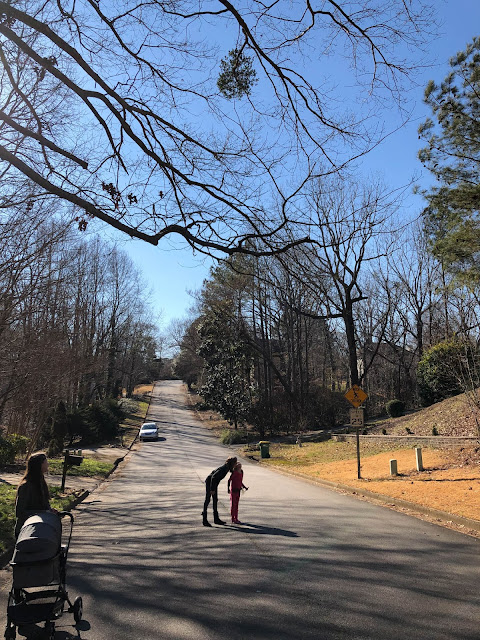 When we got home I bravely engaged in cookie baking with Zoë. She's been asking to make peanut butter cookies for weeks. Technically, she's been asking Rachel about peanut butter cookies for weeks, but Rachel has given her the runaround. She's told her, "On Saturday..." for the past three Saturdays and when Zoë asked her about it again today Rachel said something about how "intense" Zoë was, which made Zoë cry (even though...she can sometimes be intense...but more on that later).
Anyway, clearly making cookies with Zoë wasn't at the top of Rachel's priority list and, honestly, that's fair. Cooking with children requires an entirely separate skillset from...just cooking. And Zoë is my child. So...I made peanut butter cookies with Zoë this afternoon.
Here she is stamping the cookies with a beautiful flower stamp (the fork-squishing method is fun, but the pretty flower stamping method is more fancy, and this is Zoë we're talking about): 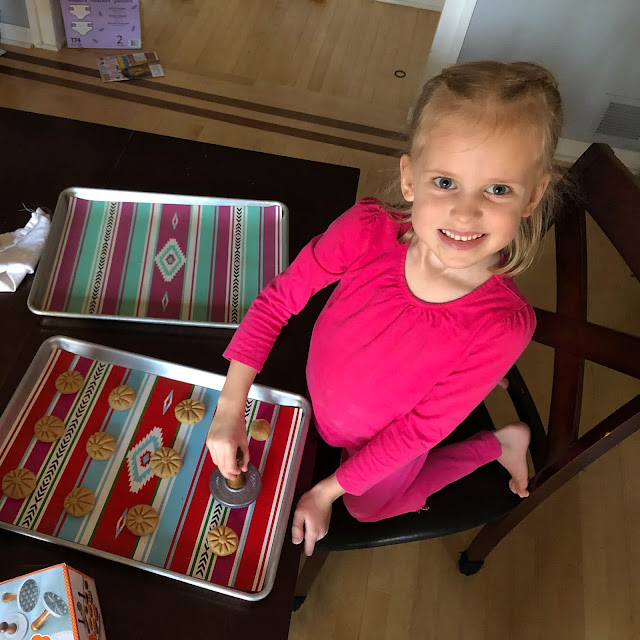 She was a wonderful helper—measuring, mixing, and cleaning up messes! Here she is taking some hot cookies off the cookie sheet: 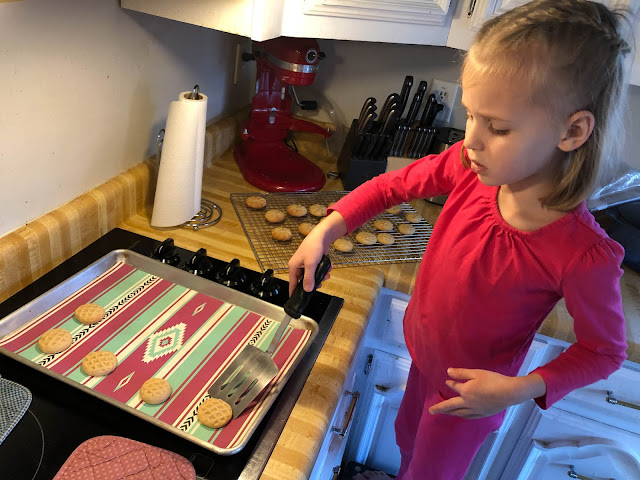 And here's a close up of her beautiful (and yummy) cookies: 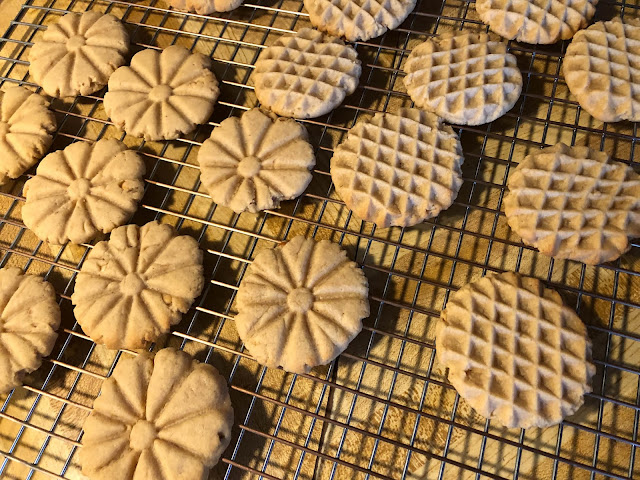 When we were finished, Phoebe and I escaped for a late afternoon nap while Miriam made dinner. We had rice, pot stickers, and green beans in honour of Lunar New Year. Then Andrew took the big girls off to mutual and the little kids and I cleaned up from dinner and then went downstairs to play Lego.
Andrew got a little light box to photograph various projects since we're always trying to take decent pictures of things but the lighting is always abominable. Benjamin wanted to try it out, so I helped him set it up and he took a billion pictures of his Lego creations (so I wasn't a terrible mom to everyone else while I was being an excellent mom for Zoë). 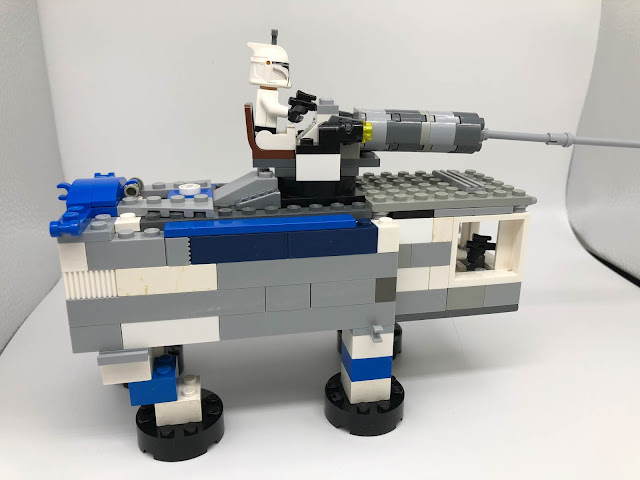 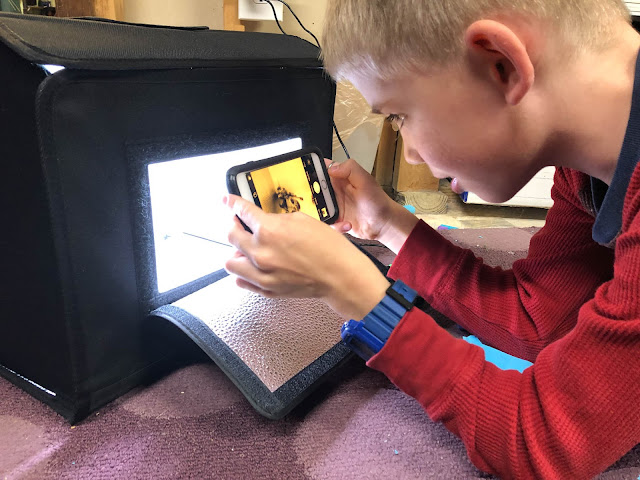 Here's a little house Zoë was working on (she dropped it on her way to the light box and then had to quickly (and tearfully) reconstruct it before we took this picture): 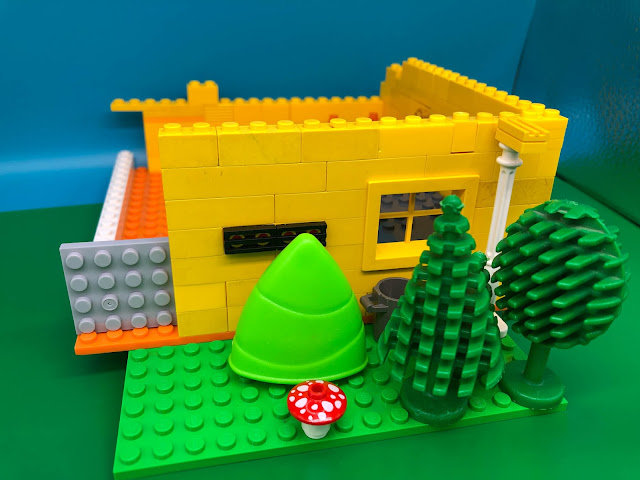 Phoebe seemed quite interested in the Lego room; she doesn't usually spend a lot of time hanging out down there (mostly because she's a baby and Lego isn't very fun (and is a little bit dangerous) for babies): 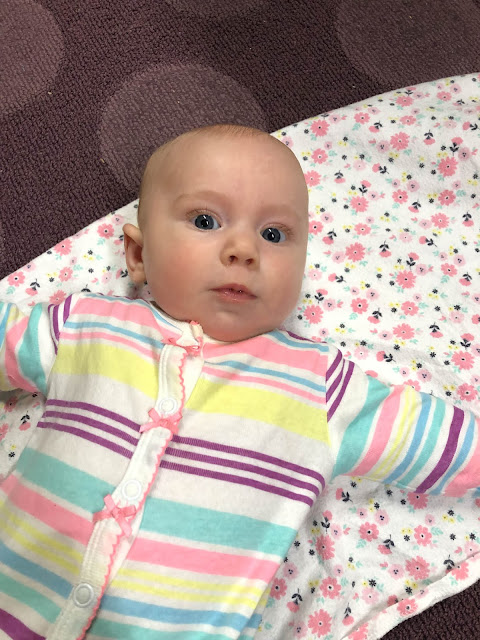 I'll zoom out a bit so you can see what the Lego room really looks like (complete chaos): 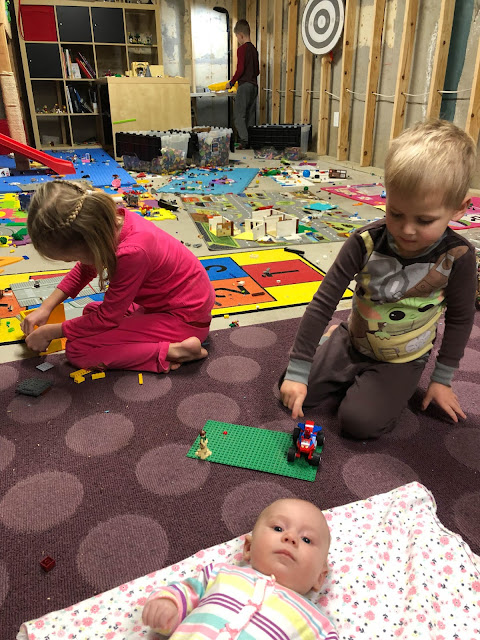 We ended the evening by reading some stories upstairs before the big girls got home from their activity. 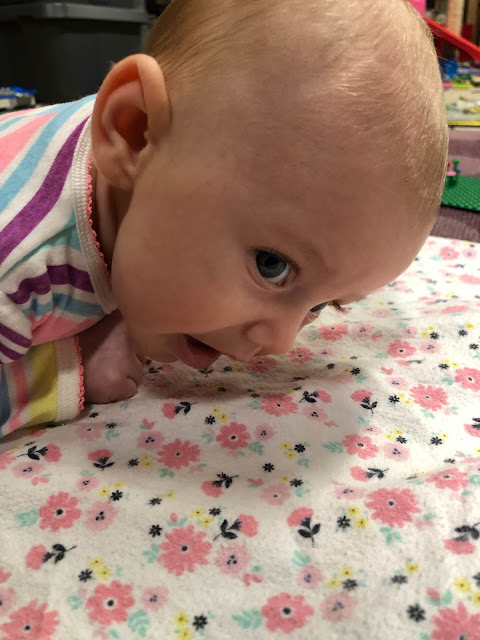 So maybe my standards for what constitutes a great mom are a little low (especially right now; I just had a baby), but today I did Zoë's hair and we baked cookies together and...that was pretty great.
It reminds me about how just before the pandemic shut down our world, I had the brilliant idea that Andrew and I should start "dating" our kids, instituting a little more one-on-one time with them. We had thought of it before, but time and money were both such highly regulated resources before we moved to Georgia. Time is still a limited resource, but our money situation is a bit improved now that we have an actual job. Our real hang up has been the pandemic.
But, spending even just those few moments baking cookies with Zoë was rather sweet (just like taking the time to do linocuts with Benjamin last month was wonderful), so I think we'll explore this one-on-one idea more.
Posted by Nancy at 12:23 AM