Monday was Valentine's Day and we went all out at our house. We started the day with homemade doughnuts (baked in a cast iron form), which I had completely forgotten we'd planned to do until I smelled them baking in the morning. Andrew got up and did that.
While we were eating our doughnuts, Andrew brought out all the gifts we got.
As the pandemic inches toward its two-year anniversary, I've been feeling a little itchy for experiences, so I did a little retail therapy. Deep down inside, I know the kids are fine. But I also want them to experience...things...so we provided some experiences for them for Valentine's Day.
Phoebe actually provided her own new experience and rolled from her back to her front for the first time, which I found rather surprising because she's just barely 3 months old and has shown no inclination for...anything. I mean, I understand that babies are little blobs at first but, like, all Phoebe likes to do is eat and sleep...so what's she doing rolling over? And like...how? I mean, when Rachel did it, I understood because that girl was born determined to grow up. She held her head up the whole way home from the hospital, and she just smacked of determination from birth. She was going to roll and crawl and walk and run!
Phoebe? Well, Phoebe isn't like that. She's content.
Did she scream the whole entire day today? Yes, she did. But usually she's just...content.
She likes cuddles, eating, and napping. That's it, although she is starting to make up a few little games. For example, Rachel's been trying to convince her to give out high-fives since we brought Phoebe home from the hospital. Phoebe does not understand the concept of high-fives. She doesn't know she has arms, constantly punches herself in the face (and cries about it), and is only now understanding how to grasp things (and, quite recently, to bat at her toys). But the girl doesn't grasp the concept of high-fives.
She's three months old, though, so...she's got time to figure that out.
Anyway, the other day, Rachel offered her hand for a high five and Phoebe leaned forward and rested her face in Rachel's palm.
And that's her new game: face high fives.
When she's in the mood to play, she'll smash her face into people's hands if they offer her a high five.
Anyway, here's a picture of Phoebe all flipped over to her stomach (and upset that she's pinning her own arm down): 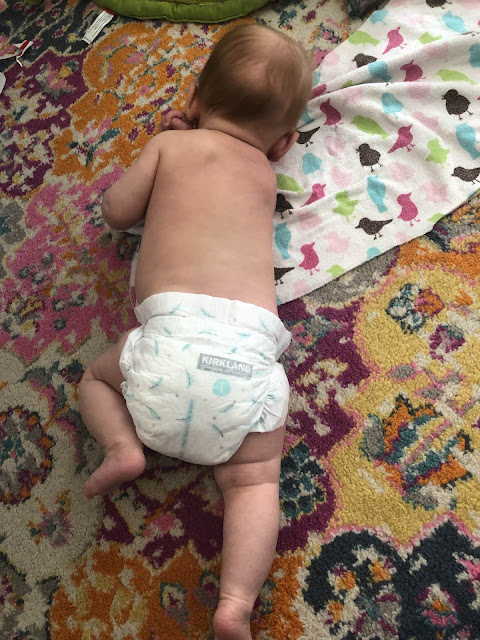 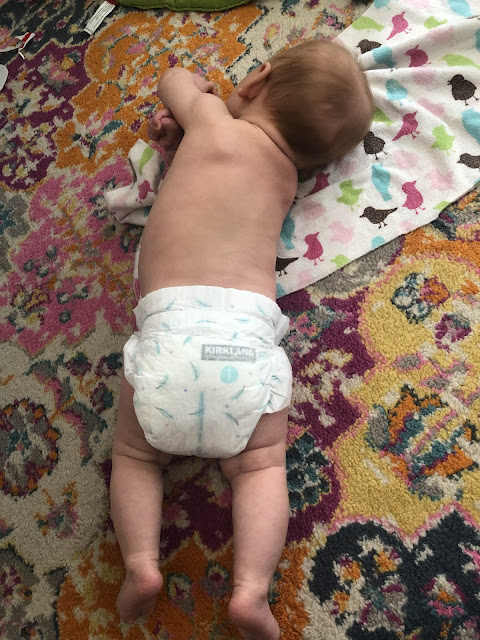 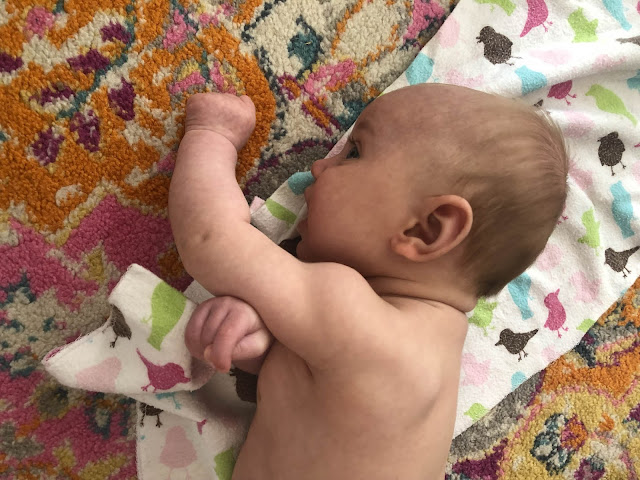 I was right beside her and I missed the whole thing!
The kids and I were all doing schoolwork on our tummies (Zoë was working on her social studies project, Benjamin was doing math, and I was helping Alexander with a reading lesson) because desks are for wimps, and I'd placed Phoebe on her back beside me. On her back because she hates tummy time, so if we aren't entertaining her during tummy time chances are high she's just going to get angry.
But then she started getting angry on her back, anyway, so I looked over and there she was, stuck on her tummy, silly baby!
I freed her arm so she could get a few minutes of good tummy time in: 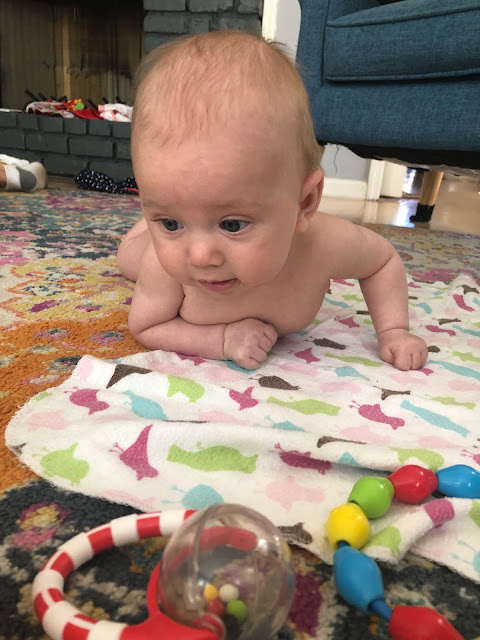 (She didn't roll over once today. She just screamed. The whole day.)
But we were talking about Valentine presents, weren't we?
For Zoë and Alexander, I found this cute no-sew fleece pillowcase craft that came with—get this!—an owl and a unicorn in the same set. What are the odds?! So after they were finished with their schoolwork, I helped them make pillows for their beds. 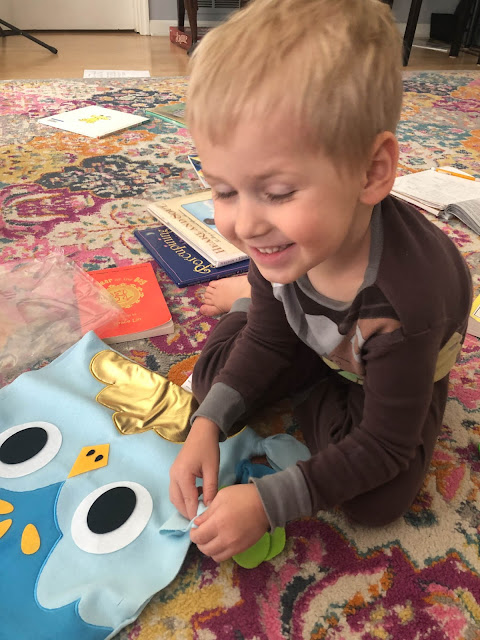 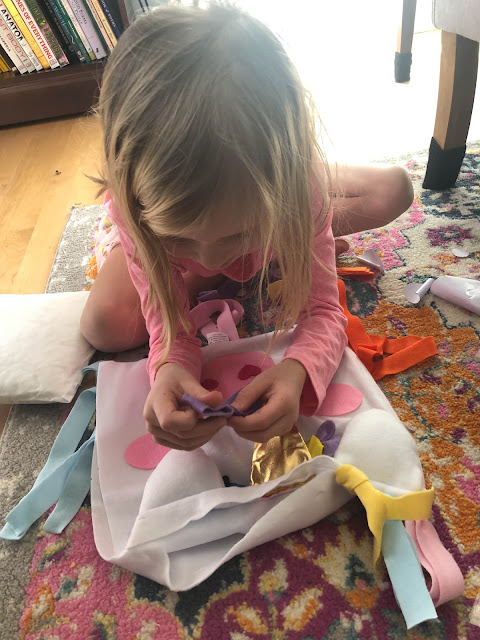 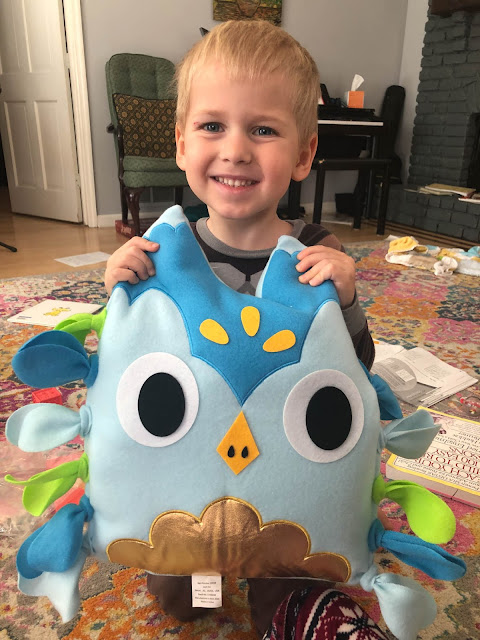 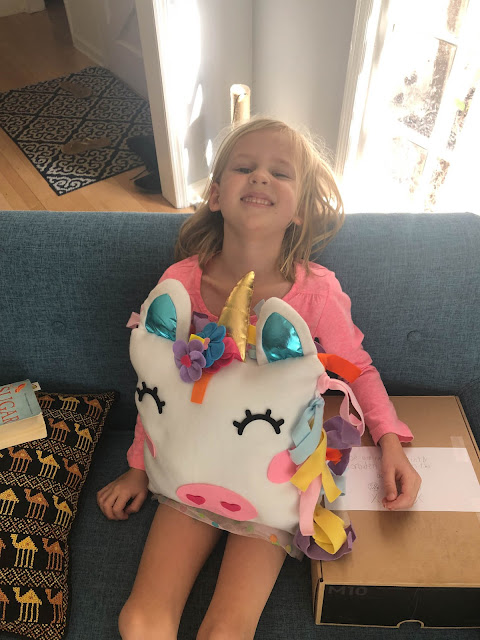 Benjamin has been begging to learn how to whittle, so I picked out a whittling set for him. It came with a hunk of wood that is shaped somewhat like a spoon, and which he's supposed to turn into a spoon. I know nothing about whittling, so he's been watching a lot of YouTube videos about it. The kit also came with a pair of cut-resistant gloves.
Here he is following the rules that came with his kit: sitting down, away from people, wearing his safety gloves, cutting away from himself, etc. 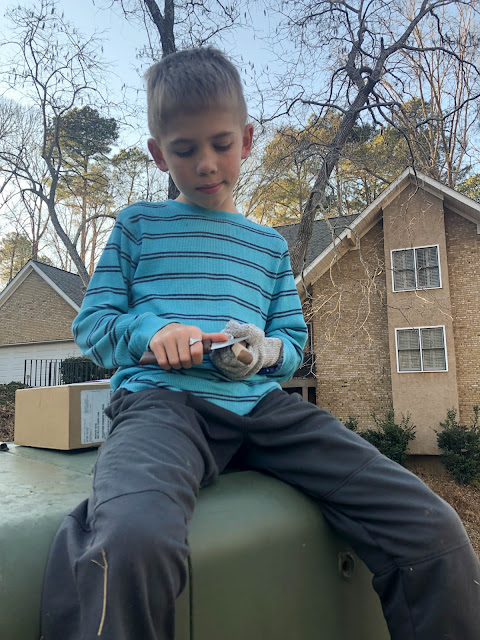 He's also been rather strict about requiring adult supervision, so Phoebe and I went outside to sit with him while he worked on his spoon handle: 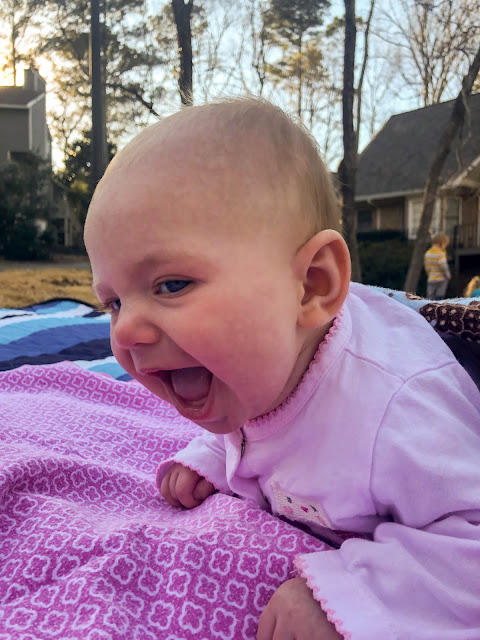 Miriam expressed an interest in soap making, so we picked out a soap making kit for her. Interestingly, we're reading Sugar (by Jewell Parker Rhodes) right now and we had just red the chapter about soap making (last Thursday), which suddenly sounded ridiculously dangerous to me. How early humans survived, I will never understand.
How did they come up with soap? We'll just soak these ashes until an extremely caustic substance is formed, boil that up with some animal fat, and use the solution to clean ourselves with!
Sounds logical.
Anyway, I was worried about whether or not our soap-making adventure would include handling lye, but it's a glycerin-based kit so there was no lye involved (glycerin is a byproduct of soap making...I think). We also checked the ingredients in our soap to see if they used a lye based (and they do...otherwise they wouldn't be soap). We went down quite the rabbit hole researching soap making and Miriam was thrilled when she opened her gift.
She and her siblings burned through that kit in one afternoon. They made soap for just about everybody on the cul-de-sac and they've never been so willing to take a bath! Alexander used the sugar scrub Miriam made (she looked up several recipes to try) and then walked around the house making everyone smell his skin and feel how soft the soap made it.
We were stumped on a gift for Rachel, so we ended up getting her an "impulse sealer," which is just a fancy little...hot thing?...that seals plastic bags. So the kids had fun packaging the soaps in the plastic gift bags that came with the soap making kit and then sealing them with the impulse sealer.
It made for a wonderfully fun Valentine's Day afternoon!
Zoë was assigned the lesson for Family Night. She chose a number of scriptures about love and made a matching game for us to play. She was quite proud of her lesson, even though she didn't get a match until the very end of the game. When she saw that it was her turn and there was only one match left she started to get pouty, but then realized that meant she'd definitely get a match and gave me an impish little eyebrow waggle before taking her turn. 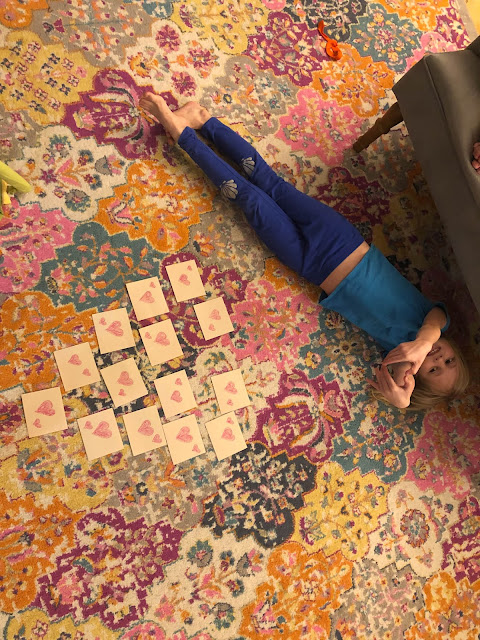 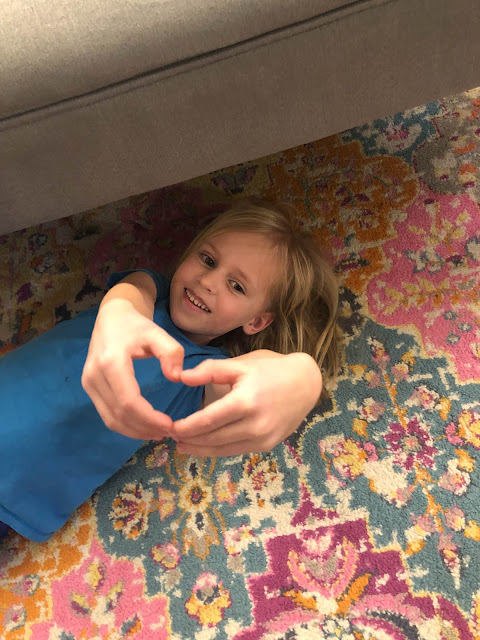 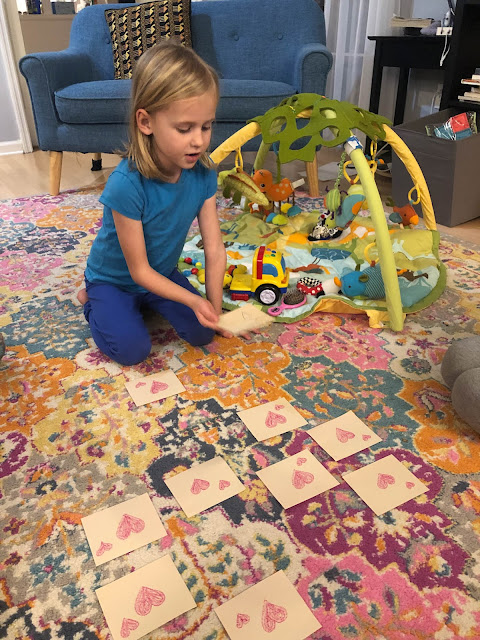 Rachel, of course, made some Valentine's Day treats (for Valentine's Day and to celebrate Grandma's 4th birthday in heaven). Here's the little cake she made especially for me (everyone else got chocolate cupcakes): 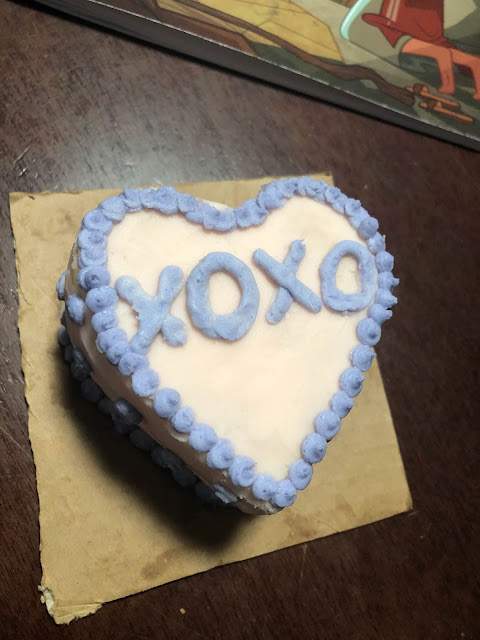 Rachel's other Valentine gift was that she finally finished her dual-enrollment English 101 course (with a 97% A). We're very proud of the hard work she put in (even though she found the course incredibly boring). She's been looking at BYU Independent Study courses; they're a bit pricier than the ASU course she just finished, but it looks like ASU moved the majority of their courses onto a strict 8-week schedule rather than a flexible 1-year self-paced style they offered for many courses last year. We'll see what she ends up doing.
Lastly, Andrew surprised me with some fun new bowls that came in my favourite colour!
If you've been wondering what my favourite colour is, I'm sure you'll be pleased when I reveal it below because I hardly ever reveal my favourite colour (if I did, all the other colours might feel bad).
My favourite colour is...this: 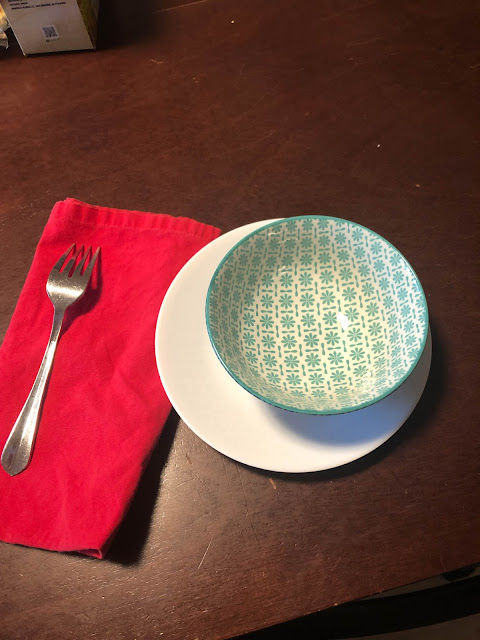 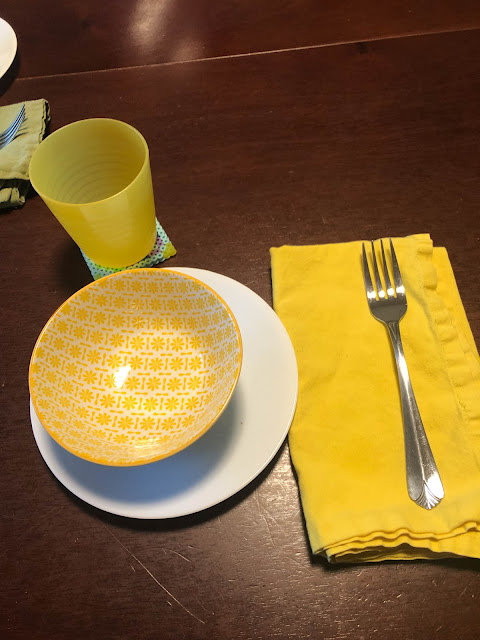 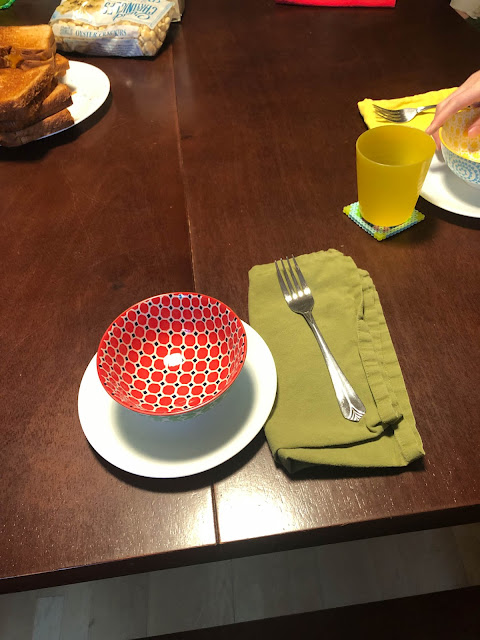 Or...any colour.
My favourite colour is whatever strikes my fancy.
These bowls each have a different colour/pattern on the inside and outside. I didn't take great pictures, but you can kind of see the outside of the yellow bowl in the picture above—it has a blue outside. My friend Tamsin has the same set and once upon a time (several years ago now) we had ice cream in these bowls when we were over at her house and I may have gushed over them a little because they're just so fun.
Andrew made a mental note of that and surprised me with them on Monday. They're perfect for me because I don't have to commit to a pattern or colour (see also: my area rug in the pictures above) and can choose whatever bowl is calling out to me.
We had tomato soup for dinner this evening so we could use the bowls and all the kids agreed that the soup tasted much better in these whimsical dishes.
Unfortunately for Andrew, I am not an astute gift giver, so he picked out his own Valentine's Day gift.
Posted by Nancy at 1:24 AM