All she wants for Christmas 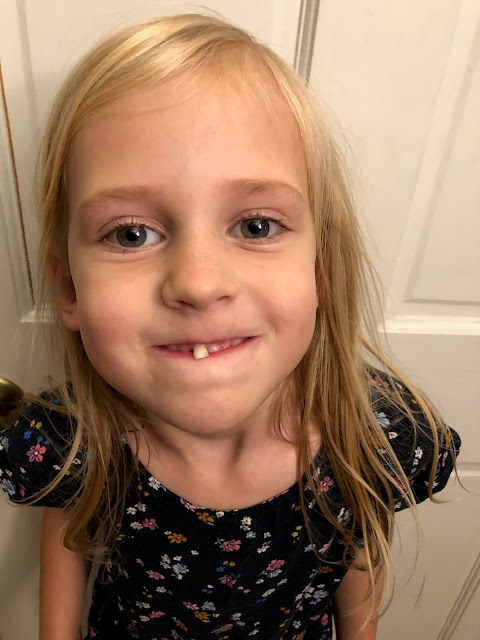 Zoë has been working and working at her wiggly tooth lately. Her hands were constantly in her mouth, which was really skeeving everybody out, and she would come up to me about a million times a day to ask me to "check" to see if it was loose enough for Daddy to pull.

Andrew is the tooth-yanker around these parts. I'm more of a wait-until-it-falls-out-on-its-own kind of a person. Zoë may be that kind of person as well, but she wanted that tooth out and she knew she couldn't pull it herself, so she kept asking Andrew to do it. But then it would hurt because it was never "ready."

On Sunday night she came to me and I got a kleenex out so I could grip the tooth to test its "ripeness" and it popped right out in my hand. *gag!* *shudder* *gag!*

I don't recall ever pulling anyone else's tooth out before (as I mentioned, I am more of a wait-until-it-falls-out-on-its-own kind of a person) and it was not pleasant.

Zoë was happy, though.

Andrew was confused, exclaiming, "You cut your own umbilical cord but pulling a tooth is too much ick for you?!"

With great dedication, Zoë put the tooth on her little nightstand, ready for the tooth fairy to find it. 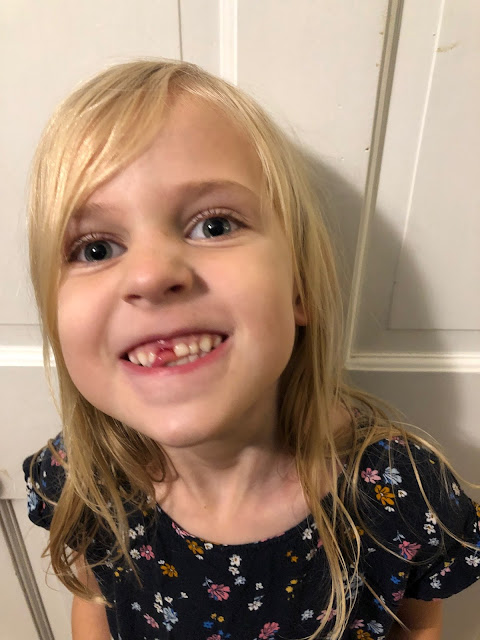 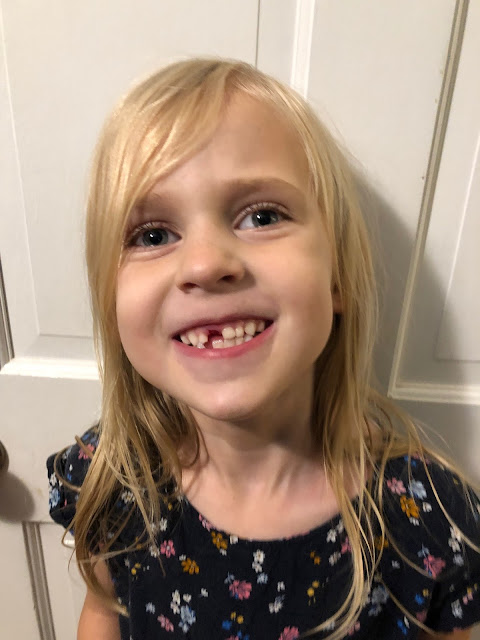 Unfortunately for her, Phoebe had a really rough night and we plum forgot to give her any cash you know the tooth fairy can't come into your room when your little sister is awake! That would never do, for the tooth fairy is a very secretive creature. Or so she told Zoë in a note when she left her a dollar the next evening (when Phoebe had a much better night).
Personally, I think getting a whole dollar per tooth sends some pretty serious Rich Kid vibes, but Zoë felt like the tooth fairy is skimping out on her and should reconsider her rates, given inflation. So I told her to be grateful because I think the most I ever got was a quarter.
I'm just about precisely 30 years older than Zoë, and if I was getting a quarter for my teeth 30 years ago, Zoë should only be getting two quarters (with inflation factored in). So a dollar is twice as much as I got as a kid! Andrew claims he got a dollar per tooth growing up, though, so if we look at it that way she's getting half as much as he got as a kid.
I think a dollar is a pretty good amount of money to exchange for a lousy little baby tooth (my friend gives her kids $20 per tooth, which frankly feels like a ginormous rip off for the parents tooth fairy). Have you seen how tiny those things are?!
Phoebe suddenly has five teeth (three on the top, two on the bottom) and they look so humongous in her mouth. It's hard to believe that those itty-bitty baby teeth are what have carried Zoë through her life to this point...because they really do look so tiny in Zoë's mouth compared to Phoebe's mouth.

Anyway, teeth. The most high maintenance bones in existence!
Posted by Nancy at 11:19 PM