Kind of like how in Alberta your four seasons are almost winter, winter, still winter, and road construction, here in Egypt we have almost summer, summer, still summer, and bug free.

I’m rather fond of the season without bugs. We still have mosquitoes, that’s true, but at least we were able to stop battling flies and cockroaches and ants for a few months. I knew the seasons were changing on Wednesday when we went to Maadi House and Rachel was fighting off the “bees” (read: flies) the whole time. They were swarming her face and she kept whining about them getting into her eyes. I don’t blame her for whining. They were really annoying.

And then…when I was making dinner last night I noticed a cockroach on the fridge. It was about the size of the fingernail on my pinkie finger. I made Andrew come in and kill it and then we went around and plugged up all the drains in the house because it doesn’t matter how clean you keep your house, they will still get in. 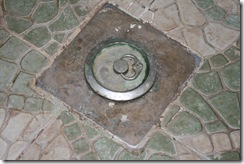 We have these nifty little drains on our bathroom floors that open up to expose the drainage pipes that carry out our waste water, raw sewage, etc. Cockroaches live in these pipes. These pipes are connected to our toilet, bathtub, and sinks. If the cockroaches really want to get into our apartment, which they often do, all they need to do is climb up the pipes.

During “summer” and “still summer” we were absolute vigilantes about covering our drains to avoid another cockroach infestation. We waxed prideful during our “bug free” season and slacked off in our drain covering habits. Thus the reason I saw that nasty little cockroach on our refrigerator.

Her favorite thing to do is to take it off. That is my least favorite thing to do because it happens to be where all the cockroaches, especially the ones too big to climb through the other drains, await their opportunity to enter our apartment. Beside that, it’s really nasty down inside that hole, even without the ever-present cockroaches. 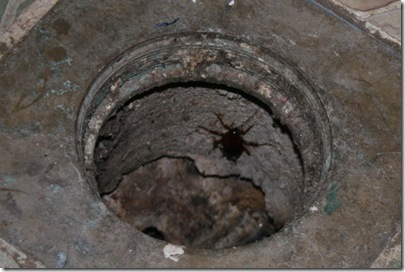 This is a cockroach that we noticed last night when I asked Andrew to fix the lid so that Rachel would have a harder time taking it off. So gross.

He took off the lid, yelped, and slammed it back on again.

“There’s a huge cockroach down there.” He said, solemnly replacing the lid.

My human thirst for first-hand knowledge got the better of me.

“Show me,” I demanded, climbing into the bathtub just in case it was quick enough to crawl through the hole and…I don’t know…attack me. Somehow the bathtub seemed to be a safer place.

He slowly revealed the cockroach for me and, although it was still big enough to gape at, it wasn’t big enough to absolutely scar me for life. I’ve already been scarred by a cockroach in that drain and this little guy didn’t even come close in size.

When we first moved into our apartment we were battling both ants and cockroaches, constantly, and were still trying to get our house clean enough to be livable. It seems to me that instead of cleaning when you move out (as is customary in America…at least, it’s what I’ve always done) you clean when you move in here.

So, I was mopping the floors and mopping the floors, trying to get rid of the Cairo dust (it’s impossible…ever since Phyllis, who has lived here basically her whole married life, mentioned having dirt in her sheets we’ve decided that getting away from the sand and grime of the city and desert is virtually impossible). I was dumping the mop bucket down the handy little drain on our bathroom floor because that was easier than lifting it over the balcony railing.

One time I lifted the lid to dump yet another bucket of filthy water down the drain and saw the biggest cockroach I had ever seen. It was probably 2 or 3 times the size of the cockroach we found last night. It was huge! Probably a good 2 inches long, and fat.

I gasped (because I’m not a screamer) and aimed my bucket so the water would fall on the cockroach. I had hoped it would wash the cockroach away, but the cockroach stood its ground.

So I slammed the lid back down, screwed it on, and haven’t touched the lid since…at least, not until a few days ago when Rachel discovered how to take it off. Now I find myself constantly adjusting it to make sure it’s fully sealed. And it gives me the heebie-jeebies every time.

I still don’t know what I think they’re going to do to me, but the memory of having them crawling around my fridge and dropping on my head while I’m searching for ketchup is enough to make me sick to my stomach.

Also, the fact that I’ve lived with roaches long enough to be able to have roach flashbacks. Ugh…

As a side note, I have a theory that the cockroaches play an integral part in Cairo’s sewer system. If we got rid of all the cockroaches, I have a feeling that the sewers would be backed up all the time. They can eat their way through anything and can, likewise, survive almost anything. They are probably what keeps our running water running. Isn’t that a pleasant thought?