To see the senorita…

…With flowers in her hair! 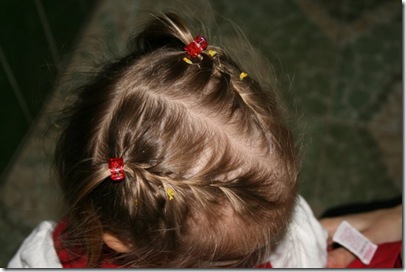 Rachel has sat still long enough the past two days that I’ve been able to do French braids, which is kind of exciting, I think. The mere fact that she is able to sit still and entertain herself for that long while I tug at her hair opens up a world of possibilities.

She was so cute at church today…after she stopped screaming “MY!!!” during sacrament meeting, that is. Everything was “hers” today and she was quite vocal about it. I think she was trying to make up, volume-wise, for all the other children that were gone. Half our branch was absent today.

The Penrods were there, though, which was nice, because it meant that Rachel didn’t have to be alone in nursery. She’s really excited about nursery lately and today even told us so.

“Noo-see!” she yelled after the closing prayer of sacrament meeting, “GO! Noo-see! My! Noo-see! Yay!”

It also means that after church when I was visiting teaching Simmone, Rachel could go out in the yard and play with the Penrod children, which she did. All by herself.

Mairyn decorated Rachel’s braids with flowers that the children picked from…somewhere. And when I was walking down the stairs, I saw them all outside, sitting in a circle, playing nicely together.

Or maybe I was happy because Spencer said that they often come to the church to let their kids run around in the yard. We were like,

He was like, “Oh, yeah. We do it all the time. Let them exercise their God-given right, as Americans, to have a yard to play in.”

We very well may find ourselves exercising that right more often.

Rachel wanted to go home with the Penrods when it was time to go home. We sure are going to miss them when they’re gone! Especially since both Sam and Loei will be leaving nursery as well. And Finn’s family is moving away. Who will Rachel play with?

My only consolation so far is that I know of one family with 7 kids that will (probably, hopefully) be moving here this summer. They have a 1 year-old. And the Houses just moved in. Their youngest is 4, but she adores Rachel and plays very nicely with her.

Those are my Friday afternoon ramblings. I don’t think I’ve had a coherent thought all day, so why should my blog post flow?