We’ve been working on numbers recently. Part of the reason for that is because Rachel discovered, at the bottom of her book bin, a book called Numbers. I don’t want to give away the storyline or anything, but basically it starts with 1. Then you count different animals on each page…2, 3, 4…and so on until you get to 10. The ending has a bit of a twist to it though, because you might think that the story will just end on 10, but it doesn’t. The very last page has a picture very similar to what is on the front cover (it very well may be identical) and the last thing you count is “many.” Total unexpected, complete surprise ending.

Sorry if I spoiled anything for you.

Because the story line can get a little dull when Rachel wants to read the book 20 times in a row, I switch things up for us and count in different languages. Just to keep things interesting. We do Russian, French, German, Italian, Spanish, Japanese, and, of course, Arabic. Perhaps even a few others that I can’t think of right now.

Not that I’m bragging. Counting in foreign languages does not entail fluency. As my older sister, Abra, said to my mom when she was about four years old, “Mom, what does ‘eins-zwei-drei-vier-fünf-sechs-sieben-acht-neun-zehn’ mean?”

She completely missed the boat on that one. Sorry, Abra. (She knows now, by the way.) Learning to understand different languages is difficult. Trust me. Arabic makes me want to cry sometimes.

Rachel really likes Arabic, though; she reacts well to it. I suppose that’s because she hears it everyday. She totally knows if someone is speaking Arabic or English. If she’s around English speakers she’ll speak English. If she’s around Arabic speakers she’ll say, “أربعة” (arbah) over and over and over again. Apparently 4 is her favorite number. In Arabic. (In English it is 2).

I got a video of it, but only after she had decided that she was finished playing that game and wanted to climb in the basket herself, which is why she’s so desperately trying to empty it of blocks. (Please ignore my horrible accent and stuffy nose.) 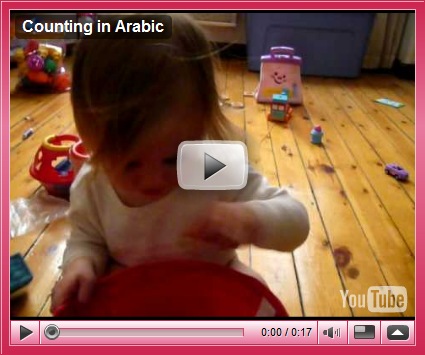 This is really quite amazing to me, from a linguistic point of view.

If I am even just practicing phonemes that I struggle with (like emphatics and glottals) that we don’t have in English, Rachel will start singing أربعة. She knows that those phonemes belong to Arabic, not English.

If she wants to read read any of her Arabic books, she knows they’re Arabic and will bring the book over to me saying أربعة. One of her favorite books right now is First Thousand Words in Arabic. I think it is because there are pictures of so many things. And because it’s so long. It’s often her first choice for a bedtime story, but I always tell her to put it back and choose a shorter book. 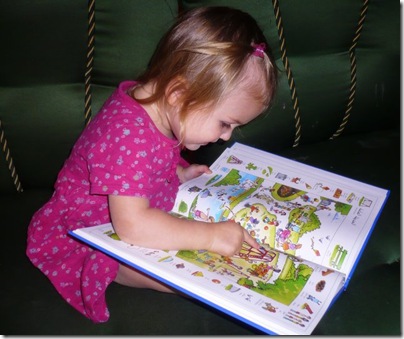 She also enjoys My Arabic Word Book, which is an alphabet book, not a counting book. It starts with alif, which is the first letter of the alphabet, equivalent to A. There is a picture of a rabbit on that page because rabbit, in Arabic, is أرنب (arnab), which begins with alif.

Rachel has this amazing talent of using the same word and/or phoneme to mean several others. For example, “wawa” could mean any of the following: water, wallet, or koala. “Wa” means either wall or walk. So, “walking on a wall under water with a koala carrying a wallet” could be condensed into “wa wa wawa wawa wawa.”

The same thing happens in Arabic. Not only does أربعة (arbah) mean four (and general Arabesque-ness), it is also how she says rabbit.

They’re close, arnab and arbah, so I can see how she would use the same word for both of them. Of course, everything she says in Arabic comes out as arbah right now, but there’s something particular about the way she says ‘four’ and ‘rabbit’ that makes me think she knows she’s doing it right.

Watching her learn how to talk is thrilling.