We now have television

Our only connection to the outside world for the past six months has been the internet, and that has been shoddy, at best, although it’s been a little better lately. We had television for the first month, or so, until it died one day. That wasn’t really a problem for us since we don’t watch television. The only show we regularly watch is The Office and we do that through iTunes because The Office doesn’t show in Egypt.

The first time we wished we had television was for the elections in November. And then the inauguration. And several other important national and world events that we didn’t watch.

Our landlord tried to fix our television so that we could watch the election. He thought it would be important to us to see who won. So he showed up to our apartment at around 10 PM on November 4th, took our television up to the roof, and had us feed some random wires through our open window.

He was up there for hours while we stood guard by our open window, watching out for Templeton (our rat, who has since disappeared) to make sure he didn’t come inside.

We didn’t get to watch the elections; and our landlord didn’t bother trying to fix our television ever again. Although Egyptians live and die by their television screens—and even cardboard houses and squatters in the City of the Dead have satellite dishes—we had to pay our full rent and not have a working television.

Again, it’s basically a non-issue since we don’t really watch television (obviously, since we haven’t had it since we moved to Egypt, basically), but it’s supposed to be included in our rent and sometimes—like when there is a bombing in Cairo—we want to be able to turn on the news so that we know what is going on.

Hatim, our landlord, eventually gave us the number for the satellite guy and left the key to the roof so that we could let the guy up there to fix it. Andrew called him a couple of times, but he never called back. Finally, last Sunday, we got a call from the satellite guy saying that he was on his way. Good thing he made an appointment.

Rachel and I were both napping when the satellite guy arrived and Andrew took him up on the roof. When I woke up, Andrew was still on the roof so I had no idea where he was. The television had been moved, though, so I figured out where he was and decided to make dinner instead of bothering them. I had just put a pot of water on the stove to boil when Andrew came back inside. He was yelling Arabic at someone on the roof, and that man was shouting instructions back at Andrew.

They were throwing wires down from the roof and feeding them through our window, again. At least we didn’t have to worry about Templeton this time, but there were other worries…like the fact that the ends of the wires were completely exposed and had no plug on them. I wondered how we were going to plug in the cord. But I didn’t need to wonder for long. Once Andrew caught the cord he marched over to the outlet and jammed the wires into the socket. 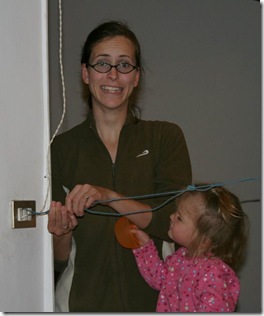 “Do you have power?” he yelled in Arabic and then, having received a positive response, turned to me. “Do you want to just hold these for a minute?”

Of course I do. Of course I want to hold live wires into an electrical socket while our 1.5 year old baby is watching me. It’s setting the perfect example for her, don’t you think?

That “minute” turned into “a few minutes,” which turned into a “where-the-heck-is-he?” I didn’t mind it too much until Rachel announced that she had to go potty and I turned to look at her, which jostled the wires, which caused them to start sparking, which caused me to freak out.

I eventually convinced Rachel that, since she didn’t have any pants on (thank goodness), she could go to the potty by herself, despite all the tugging on me and her many pleas of “Hep me!” and “Mama go!”

She went by herself in the correct place (thank goodness) and then I spent the rest of my time as a “plug” trying to get Rachel to stay away from the sparks, while managing, miraculously, not to get electrocuted, myself. 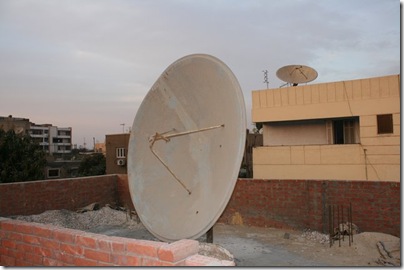 Meanwhile, back on the roof, Andrew was having his first lesson in masonry. Apparently our old satellite was so ancient and rusty and bent that it wouldn’t work anymore, so the satellite guy went out to get a new one.

Our roof is so full of construction materials (bricks, window panes, etc.) and other satellite dishes that it took them a while to decide where to put the new one. The satellite man decided to put it in a spot that looks like will one day end up being someone’s new kitchen. Andrew asked him if that was going to be a problem.

“Oh, no,” he assured Andrew, “This floor won’t be finished for years!”

That is probably true. If you’ve seen the way construction works here, it’s very easy to believe that it could take several years to build a new storey onto a building, as is the case with our building.

We don’t have an elevator so everything is carried up the stairs by a few workers. Bricks are usually delivered between 11 PM and 1 AM, (which is the perfect bedtime lullaby, let me tell you) and then sit there, in front of our main entrance, until around 6 AM when the workers show up to carry them up the stairs. They load piles of brick on old cardboard boxes, heft those onto their shoulders, and trudge up the stairs. The same thing happens with bags up cement mix and piles of sand.

It’s a pretty slow process. Granted, these men carry in one trip what would take me 5 or 6 (or more). But still…it’s a long and slow process. They’ve been doing it the whole time we’ve lived here, and probably before that, too, and there’s not really much to speak of up on the roof that’s been built up.

So it’s probably okay that our new satellite is in someone’s future kitchen. Our old one was in their living room and our neighbours each have one as well. In short, the whole roof is full of satellite dishes. I don’t know what they’re going to do when the time comes to actually finish the little renovation project they have going on.

I think they did a great job. It looks very classy. 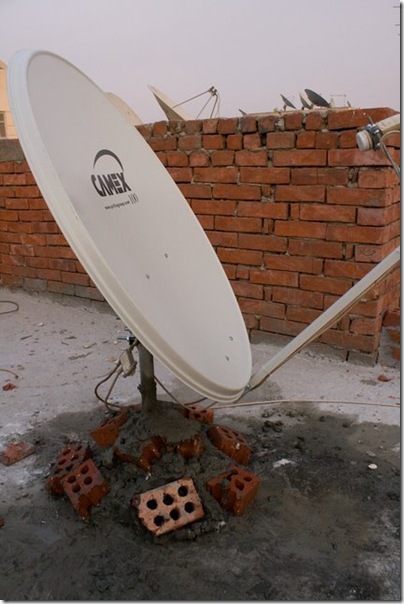 All the other dishes have nice, smoothly shaped cones of cement holding theirs up. Our stand is more 20th century impressionist stand. It really sets us apart from our neighbours. I think they’ll all be jealous.

When I asked Andrew how much this cost he prefaced his answer by telling me that Hatim was going to reimburse us and then said it was 200 LE for the dish and 150 LE for labour (about 62 USD, total).

That’s really not very expensive, I don’t think, but, all things considered, shouldn’t we have gotten at least half of the labour money? After all, I spent the evening holding wires into an electrical socket and Andrew learned how to mix cement. Exactly what did the satellite guy do?