Yesterday was a beautiful day. It was 32 degrees Celsius, which I thought felt just nice. I like things warm. We noticed that the breeze was heating things up instead of cooling things off, like normal breezes do, and we couldn’t help but wonder if this was the beginning of the khamsin.

The khamsin, I suppose, is kind of the equivalent of the monsoon season in India, only instead of rain we get sand because we’re lucky enough to live in the middle of the desert.

Last night things were still rather warm at 1 AM—too warm for a sweater. I know this because we went to the Mason’s last night for cookies and cinnamon bears and to play Settlers of Catan. We ended up staying later than we originally thought we would, which was fine (right, Melissa?) and didn’t get home until around 1 AM.

It was still hot and windy when we were walking home. Quite unseasonably warm for March, really, not that I would know what a seasonable March is like considering this is our first one here, but the change from less-warm to more-warm was quite sudden and drastic.

This very well may mark the beginning of the khamsin, because here is our weather forecast for this evening: 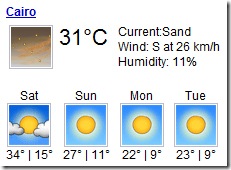 Winds of 26 km/h may not seem very blustery, but consider that the real windstorm happened this morning; this is just the aftermath of the storm.

It was pretty windy when we went out early this afternoon and hot sand was blasting everywhere. We could hardly see the buildings beyond the flyover (from around Metro Market). Rachel kept putting her hands on her hair and yelling,

She really doesn’t like when the wind “gets” her hair. I’m not really sure why because she doesn’t care if it’s messy or not. It’s the principle of the thing, I suppose. It’s her hair, not the wind’s.

Things are supposed to cool off (and settle down) again in the next couple of days, which will be nice. Even though I said that I enjoyed the warm weather, which I did, I’m not sure that I’m completely ready for 90 degree weather in the beginning of March. Because if the weather is 90 degrees in March, what are its plans for April through August?