Yesterday Rachel and I were playing some games online. First we played Pooh’s Playful Kite Flight on Disney Playhouse. Then we played Tigger’s Shadow Shapes. Rachel liked both those games but for some reason the games take a whole lot longer to load at Disney Playhouse than they do on Sesame Street so we headed back over to Sesame Street to play with Elmo.

I kind of like the Sesame Street website because they have a little box called “Parent Tips” in which they put tips for parents, go figure. They change every few minutes while you’re playing juvenile games with a squirmy toddler on your lap, trying to fill the last half hour before Daddy comes home. Sometimes the tips are really lame like, “Elmo’s birthday is February 3rd. He’s an Aquarius.”

Question: How is that a tip?

Some of the tips are actually useful—like how to take the game you’re playing and create other non-computer activities out of it, or how to interact better with your child while you’re playing the game.

Those are the tips that I like because usually when we play the computer together it’s because I’m at my wit’s end and completely out of ideas.

So, we were playing Elmo’s Cloud Game yesterday and a tip popped up that suggested making clouds on paper with cotton balls and I was like, “Brilliant! Why didn’t I think of that?” I should have thought about that because I think every child does that at some point in their life. I know I have. But, as I said, I was at my wit’s end and was simply trying to “make it” until Andrew got home, not be a fun, creative mother.

When we finished playing the game I told Rachel that we were going to make a “real” sky picture, as opposed to one on the computer screen, so that we could show it to Daddy when he got home.

We hunted around the house until I found our bag of cotton, left over from the time Andrew fell off the horse and scraped up his knuckles and arms, some glue, a piece of paper, crayons, and a yellow muffin cup (which is actually the cup between the cups of the foil muffin cups—does anyone know if you can actually use those as liners?). Then we got to work coloring our sky blue.

“We have to color the whole page blue!” I told Rachel, who had the crayon.

“Yeah!” she agreed, very excited, and made a few strokes on the page. Then she shoved the crayon in my hand, “Mama col-col!”

Apparently coloring an entire page blue was an overwhelming task for Rachel, so I took over. It’s times like this when I wish we had construction paper. Then we could just get a blue piece of paper out instead of wasting our time (and crayons) coloring an entire sheet of paper blue. Oh, well. It didn’t take too long.

Rachel added some lovely sunset tones and stuck her sun very low in the sky. I thought that was very fitting. Personally, I usually put my suns in the top right hand corner but she chose to put her sun near her red scribbles. Very creative.

She figured it out eventually and managed to get glue all over her hands, of course. She had a great time. 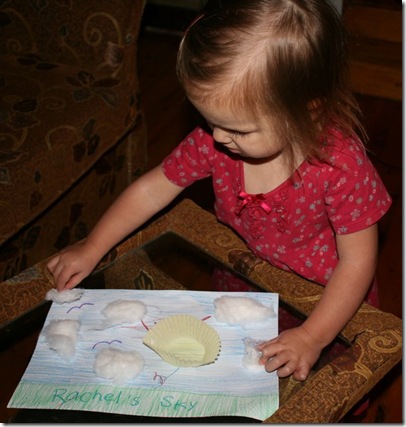 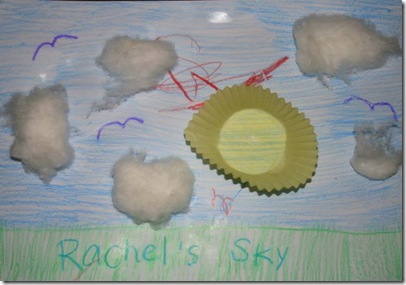