Not wanting to get ripped off, we woke up early in the morning and stood on the corner by our hotel to catch a microbus. It took us a while to figure out how they worked, but eventually we decided they had no predetermined route and when one stopped by us we asked if it would take us all to the Karnak Temple for 5 pounds.

The driver was very willing. Later we learned that was because we had paid him double what the locals were paying. We were sure to only pay 50 quirsh each on the way home.

It was neat to take the microbus, though, because we got to see more of the Valley of the Sphinxes while we were driving. It really does stretch from the Luxor Temple to the Karnak Temple. We know because we saw it. A lot of it isn’t uncovered and/or is destroyed, but it was still really interesting to see. 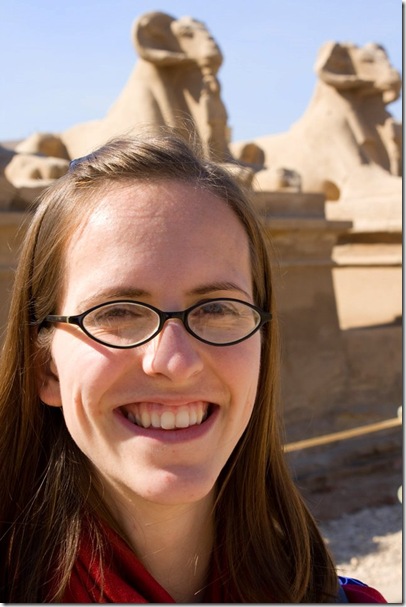 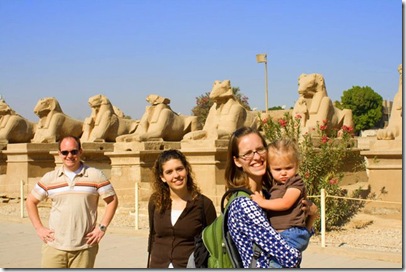 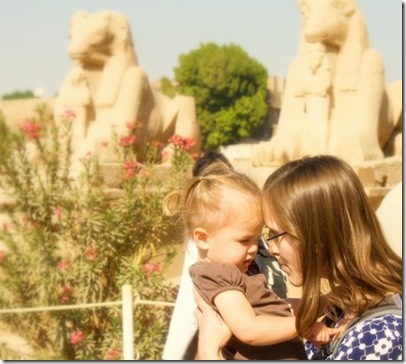 We saved the Karnak Temple for last because we were so impressed with it the first time we went to Luxor. It was the crowned jewel of our trip and we wanted to repeat that this time around as well. Unfortunately, we were less impressed this time around. We’d already seen so many other temples and things that I think we were a bit tired of the same old, same old. Karnak is also one of the more famous sites in Luxor and, therefore, is more expensive and more frequented, which is both unfortunate and fortunate. It’s unfortunate because you “have” to go see it and there are way cooler things to see. It’s fortunate because all the tourists go there, leaving the cooler places (like Madinat Habu) relatively empty. Karnak is always awash with people. 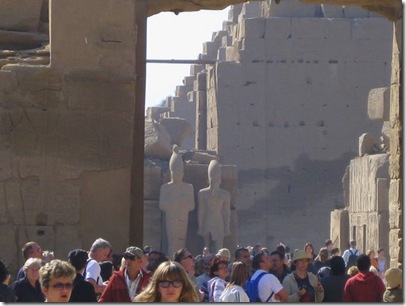 All that aside, it was refreshing, once again, to be back to our old “stomping grounds,” so to speak. We “knew” our way around the complex better than at Madinat Habu so we could more quickly show David and the Schillings the cool sites—at least, the sites deemed so by both Lonely Planet and our previous tour.

We spent a lot of time in the colonnade, which is huge, and made sure to find the Holy of Holies, the sacred water pond, and the good luck scarab. Those, from what we remembered, were basically what we looked at the last time we were here. 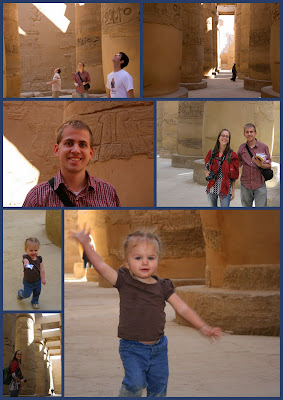 Rachel pretended that she was the tour guide; she was always holding someone’s hand and dragging them along to find more stairs and other exciting things like that. 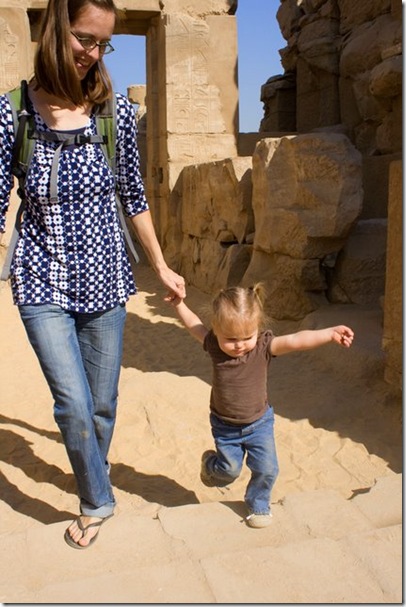 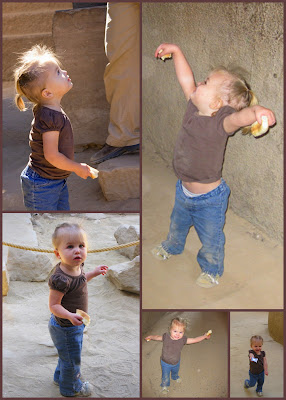 But we all know that, of course, Andrew was the real tour guide and told us everything we needed to know (or at least everything that he knew). When we didn’t know what things were, or when Andrew’s infinite wisdom ran out, we’d listen in on other tour groups… 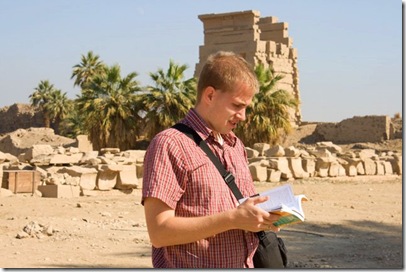 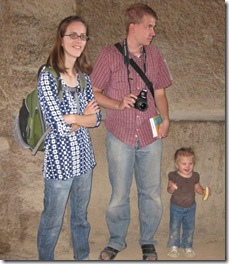 In the Holy of Holies we found a rather interesting tour and tagged along for a bit, somewhat accidentally. Everyone in that group thought Rachel was adorable, and after we ran into them in several chambers they asked us if we wanted to join their tour. We declined, but it was nice of them to offer, even if they were only after more of Rachel’s smiles. 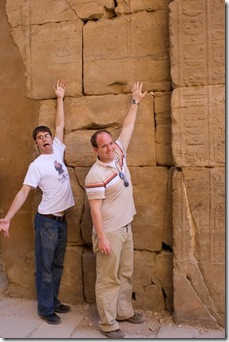 Near the end of our visit we ran into an Italian tour group that was completely blocking the way out. They were all huddled together around their tour guide, listening intently, and oohing and aahing. We couldn’t help but listen in again.

Andrew used his superb Italian skills to tell us that the blue line above David and Josh’s hands in the picture marks as high as the Nile would flood. I don’t know how they managed to use the temple during flood season. My gut instinct is that they probably didn’t use it…because that’s really pretty deep.

We found a statue that was missing a foot and took a picture, in honor of Patrick, who took pictures of his foot in front of famous places when he went to Ghana because I told him to be sure to take pictures of himself in Ghana. Andrew’s foot is relatively small compared to the gargantuan size of the statue’s foot. 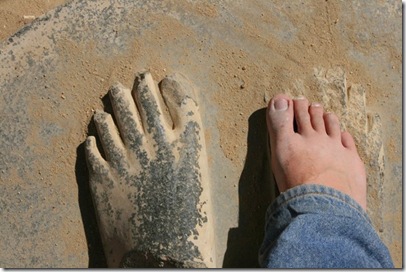 We did some other silly things, like sticking Rachel on top of ancient things, which we never got in trouble for…and pretending to make sacrifices on altars, which we did get in trouble for (which is why David looks so awkward on top of the altar—the guards were yelling at him). The guards are really quite biased over here. If you pay them, you won’t get in trouble. If you have a baby with you they encourage you to stick the baby on things for photo ops. If you’re an American, they’ll get you in trouble hoping that you’ll bribe them away. It’s an interesting (read: broken) system.

I simply can’t think of much else to say right now, and the pictures tell it so much better, so it’s going to be a little picture heavy for a while. 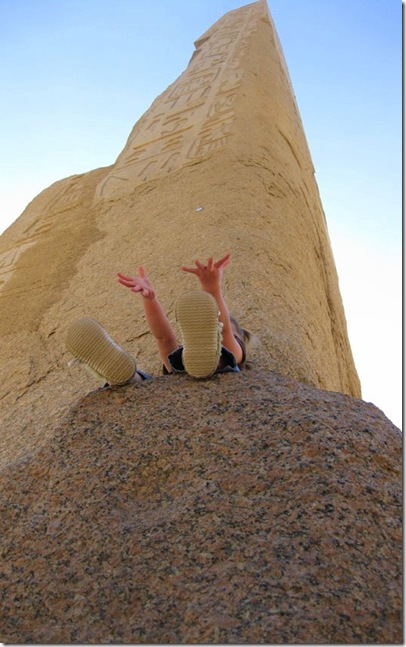 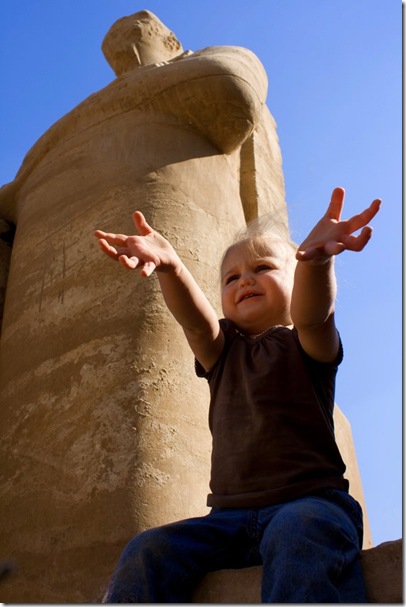 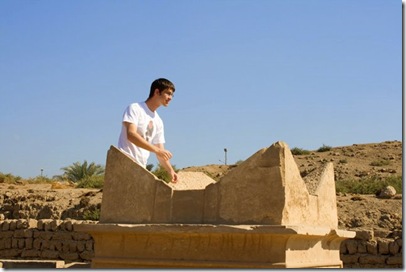 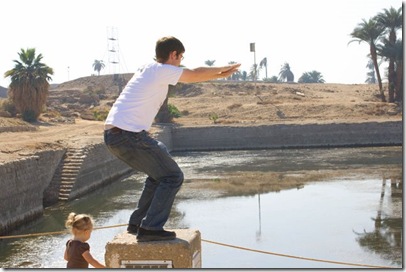 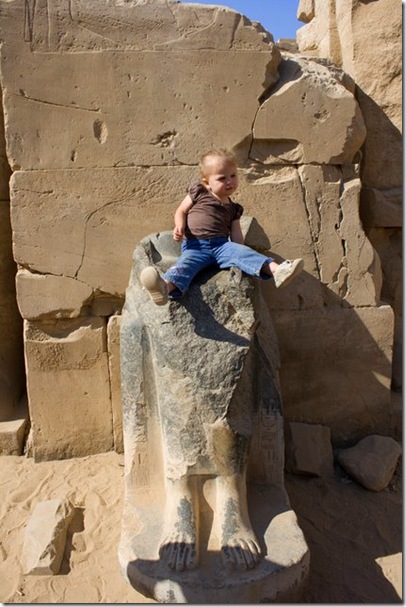 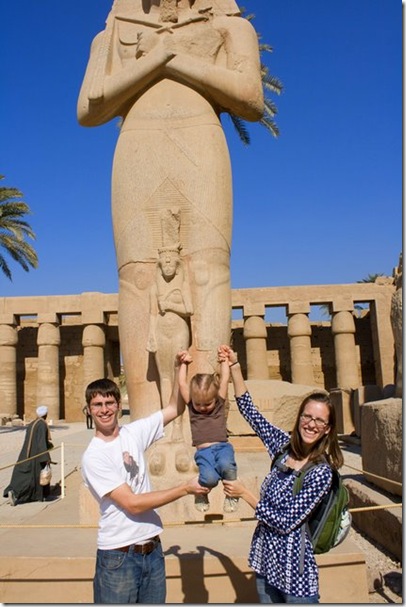 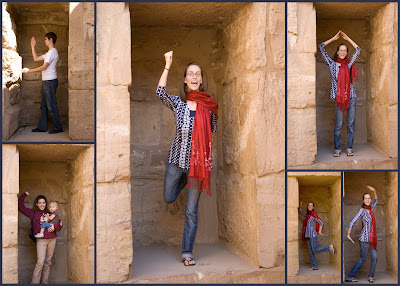 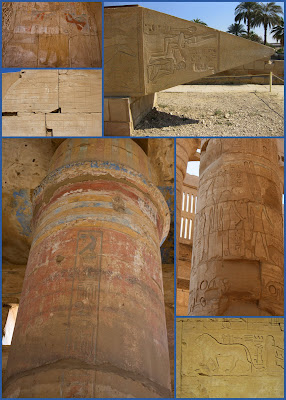 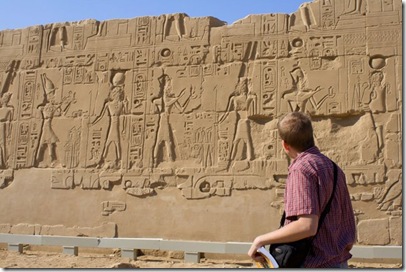 And where else can you walk around a giant scarab statue for good luck? We couldn’t remember if you were supposed to walk around it 4 times or 7 times, so we all did 7 times just to be on the safe side. My favorite part was when some random Russian tourists (без tour guide, без guidebook) showed up, watched us walk around a few times, and joined in. I wonder if they had any idea what they were doing or why. 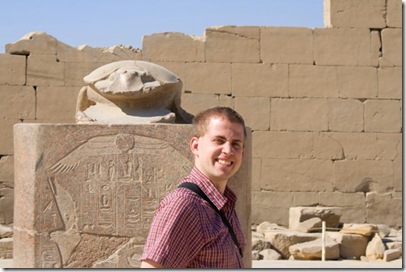 Rachel also invented a new way of walking while we were in Luxor. She holds onto your hand and then bends over until she’s completely parallel to the ground and perpendicular to her legs. And then she’s full speed ahead. We crashed into so many things. It was impossible for either of us to keep our balance very well. 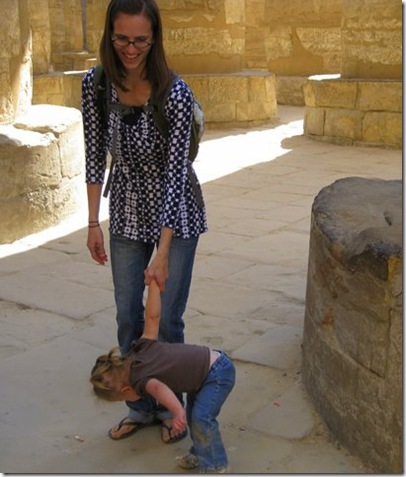 We all had a great time and Uncle David was especially happy that Rachel had finally, finally warmed up to him enough to allow him to pick her up and carry her around a bit. She had a hard time trusting him the first few days he was here. 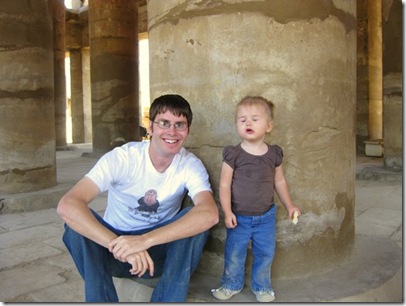 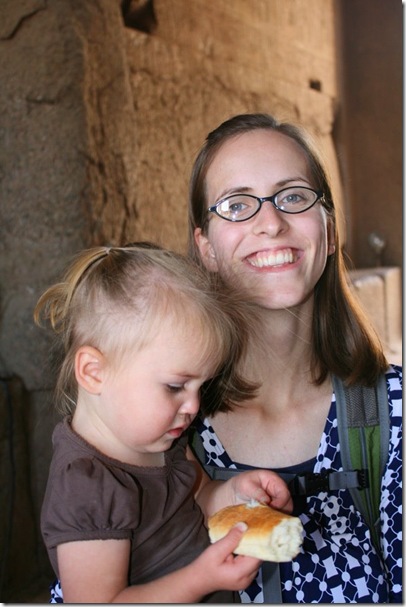 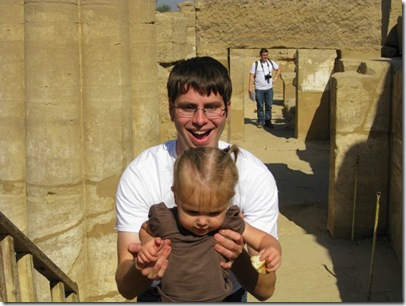 And that, in a nutshell, was our visit to the Karnak Temple. 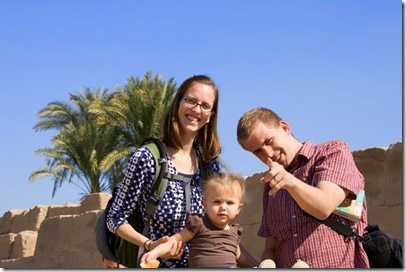