We aimed to leave the house at 1:45 this afternoon but weren’t out the door until just past 2:00 so we were a little late joining our friends at the Maadi House, but most everyone else was late, too, so I didn’t feel too badly about it.

Rachel, for some reason, didn’t play with any of the kids we knew and instead was playing with two little girls that no one knew. That’s fine with me—I think it’s cool that she was brave enough to go off and make new friends.

I had no idea what she was talking about. Pinky Pie is the name of her “My Little Pony”* but I didn’t know who Yellow was. Perhaps the toy bear she had wanted to bring along (but which I made her leave at home because I told her she could only take one toy and she chose Baby Norah). The way she was talking about them, though, didn’t really make sense so I asked her about it.

“My friend at the Maadi House. Pinky is my friend, too. They are nice, but Pinky is nicer.”

Thinking back, the two little girls she had been playing with were both wearing dresses—one of them was in pink and the other was in yellow. Rachel, failing to grasp their names, had made up pseudonyms for them on the spot.

I basically find this hilarious. It reminds me of Bridget’s post “You know, what’s-her-name?”

At dinner Rachel brought up her new friends again.

“So,” she said, using her fingers to draw out a little map on the table for my benefit, “This is me, and this is Pinky, and this is Yellow, and this is the slide. I was standing here and Yellow said, ‘Get out of my way!’ I wasn’t even in her way! That’s why Pinky is nicer than Yellow. But they’re both nice.”

Rachel was still talking about her friends while I was tucking her in for bed. I suppose being torn from the playground prematurely has scarred her for life, but it was a busy afternoon and we had to leave to go tutoring. Since spring break is next week (no, we aren’t going to do anything fun—we’re going to write thesis—thanks for asking) the kids didn’t have much homework so tutoring didn’t take as long as usual. Instead of rushing home to make dinner, we stopped to play at the midan by the church (why, yes, I do allow my children to play in traffic circles…thanks for asking)…and then rushed home to make dinner. Now you know what I do in my spare time: play. It definitely explains why my house always looks the way it does.

Miriam turns five months old tomorrow so I thought I’d take some pictures of her. She’s getting pretty good at sitting up and I tried to take some pictures of her doing so but she wouldn’t have it. It’s much easier to pull up fistfuls of grass while lying on your stomach, as it turns out, and that’s exactly what Miriam wanted to do so there was no way she was going to sit up. 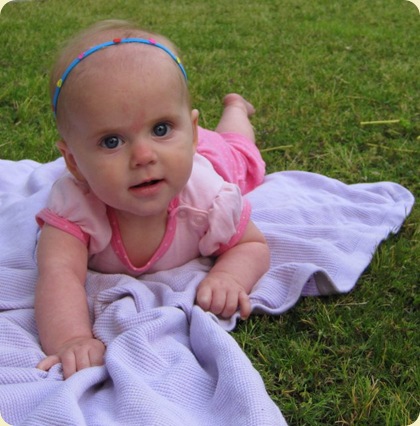 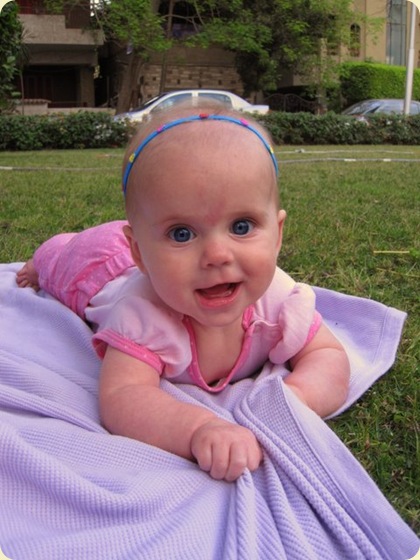 Rachel, on the other hand, was having such a great time running around collecting sticks and rocks and other such things that she couldn’t stand still long enough to take any decent pictures. I did, however, manage to get several good shots of the back of her head or Rachel as a blur of motion. The following shots were taken in the thirty seconds Rachel took to explain how tickly the soft grass was before declaring “I’m going to go find more” and running off. 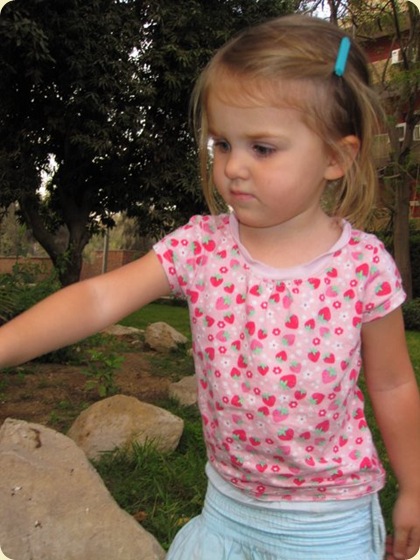 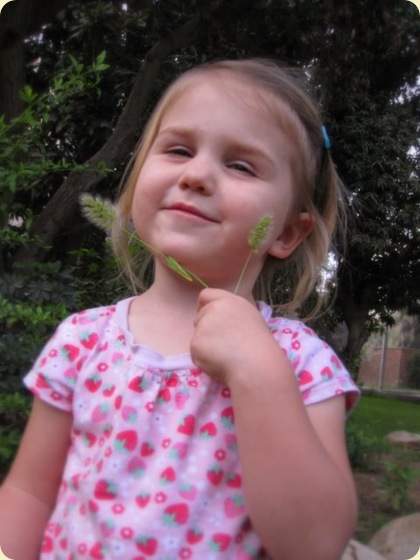 And here’s a few more of Miriam, who is just too cute…and growing up too fast… 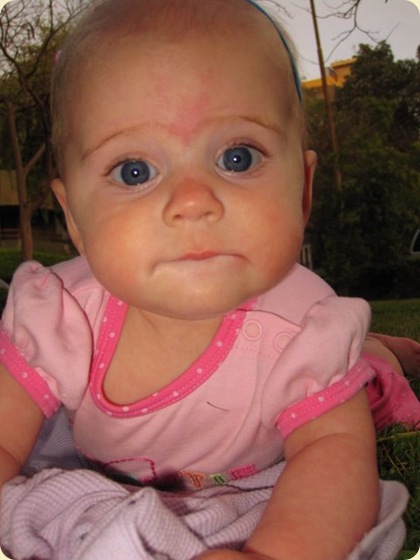 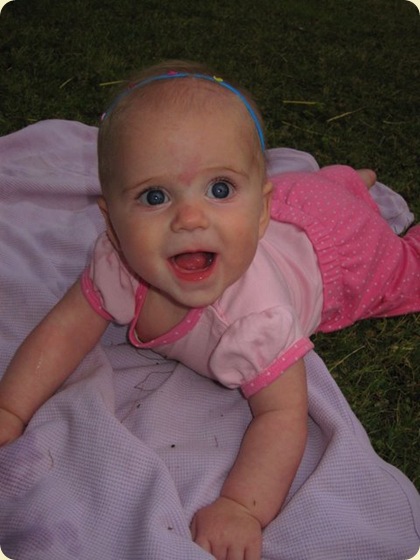 *How in the world am I supposed to use “My Little Pony” in possessive form?