Our first week of cub scouts—our trial week, if you will,—was discussing the food pyramid and healthy eating, exercise habits, and the like. Not only was it easy, but we had the old den leaders holding our hands and showing us the ropes. At the end of the meeting they handed us the manuals and wished us luck.

After a few days I cracked the books open to see what we were supposed to be covering the following week: tools for fixing and building!?

They didn't tell me I'd have to build stuff when I took this job!

Couldn't I just teach the boys to crochet? No? Darn.

What makes things even more difficult is that the requirement isn't "hammer a bunch of boards together in a haphazard fashion and call it art;" it's "make...something useful."

Their first suggestion is a birdhouse. A birdhouse?! You have got to be kidding me. There is no way I would let a living creature set foot in anything I construct. There is also no way I am supervising six boys while they try to properly assemble a birdhouse. Especially not after today.

Last week we decided to take it easy and simply discuss tools, exhibit tools, and practice using a hammer and screw driver. Rachel got out her own toolbox and pretended to work along with us. All the boys were really cute and took turns playing with her and quizzing her on the names of her tools. 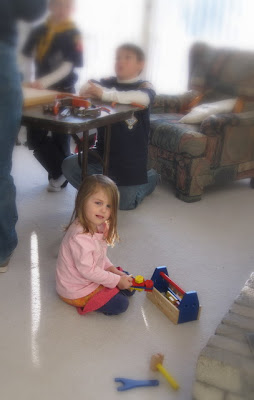 When Andrew asked them what the difference between a nail and a screw was we got the following answer:

That brought some of my building-confidence back. I mean, I may not know a lot about building stuff but I'm also not eight years old. I know nails are smooth and screws are threaded. I know the difference between a flathead screwdriver and a phillips head. And I know a monkey wrench when I see one.*

"That's not a monkey wrench."

"No, it's not. You have to hold monkey wrenches closed with your hands. That's why it's a monkey wrench. My dad said."

"No, sorry. This is a monkey wrench."

"Are you calling my dad a liar?"

Eight-year-olds are know-it-alls. At least, a few of the kids in our group are major know-it-alls. Today one boy professed that where his family was planning to move it was green all year round.

"No way!" the boys protested, "What about winter?"

"Actually," I said, "It really is green there all year round. Even in the winter."

"Well, it still snows," I said, "It just doesn't get cold enough long enough for things to turn brown."

"No. It never snows there. It only rains; there's no snow. Ever."

"Trust me," I said, "I know where you're moving and it snows there upon occasion."

"Oh, it doesn't snow like it does here, but every once in a while it will snow. You'll see."

"No. It only ever rains there. It's like the snow falls but before it touches the ground it turns to rain."

Before I could even try to change the conversation another little boy piped up.

"Why are you even trying to prove her wrong? She's way smarter than you!"

Anyway, today was building day. Earlier in the week I found a (very simple) pattern for bookends online and Karen graciously hunted around in the garage for scrap wood and even cut it up for us because, unlike me, she knows her power tools. Ours ended up being a little narrower than the pattern suggested simply because our plywood scraps were narrower to begin with.

Rachel and I worked on a set of bookends this afternoon and Daddy helped us finish putting them together when he came home from work so that we would have a finished product to show the boys. Not that any of them knew what they were. I'm not kidding: only one boy could tell us what they were (the same little boy who thinks I'm way smart). 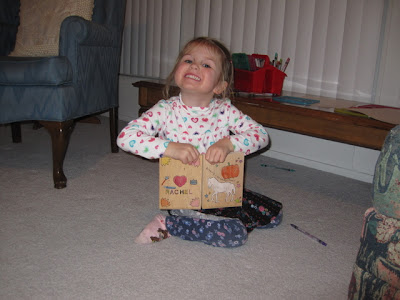 It was a hectic hour, but somehow we got all five boys (and Rachel) to sand their wood and nail their boards together. They decorated them with permanent marker and pencil crayons. We were going to put some sealant on them but it made the ink run so we stopped after trying it once (luckily we only ruined the bottom of someone's piece).

They turned out great and they're fully functional, too. 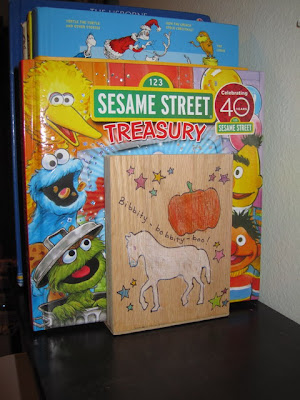 Rachel surprised me by requesting a Cinderella-themed bookend. Grandma let us borrow a bunch of stencils and Rachel noticed that the farmyard sheet had a horse on it and the holiday sheet had a pumpkin on it. She thought if we put them together it would represent Cinderella's carriage. I thought that was pretty creative.
For the other bookend she asked if I would draw Cinderella for her. I graciously declined. Instead we drew a magic wand, a crown, and a heart and wrote "Princess Rachel." That was much easier than trying to draw Cinderella.
The second set she made went missing somewhere. We, sadly, can't find them anywhere. She worked so hard on them: she made a forest scene on one with a fir tree, a bunny, and a squirrel and on the other she made a flower garden with a funky sky full of sun, moon, rain clouds, lightening, and stars. I'm sure they'll turn up eventually because how do you lose bookends? Really, how?
Next week we discuss "making choices." I think cubs will be a little less hectic next week than it was today.
* Okay, so maybe I don't know a monkey wrench when I see one since monkey wrenches are extinct and have since been replaced with adjustable wrenches, which happen to be what I thought monkey wrenches were. That throws a spanner into the works, doesn't it? (Hahaha, I'm so funny!)
Posted by Nancy at 11:04 PM