In keeping with city ordinances we were obligated to bury Lakhi within ten hours of her death. This meant that we had to bury her on Sunday, which is our Sabbath day. We believe in keeping the Sabbath day holy, but this was clearly an ox in the mire situation...or at least a " dead cat in a cardboard box" situation. Instead of pulling an ox out of a pit we were placing our cat into one—it's August and we couldn't very well leave our poor kitty's dead body decaying in the summer heat! Besides, it would have been illegal to not to. So instead of keeping the Sabbath day holy we kept it holey. Very holey. 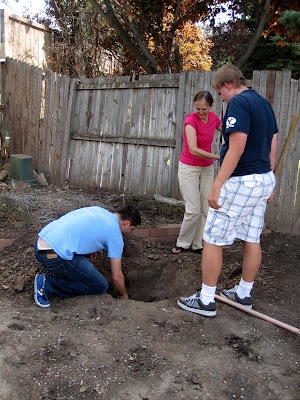 My parents' backyard doesn't have any good places for burial (it's all lawn or garden plots) so we buried Lakhi in our backyard (well, in my in-law's backyard) next to Dukie. We checked with a veterinarian friend, who said the hole needed to be 3 to 4 feet deep. 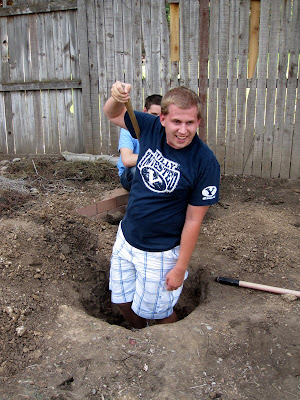 After digging for what felt like hours, we decided that three feet was deep enough. I actually didn't do any of the digging (I was on child-watching and water-bringing duty) but I could see how hard everyone else was working. Andrew and David did most of the work—we only had two shovels to use but found that the pickaxe worked wonders for loosening up the clayey soil. 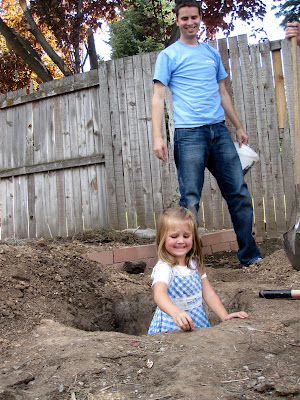 We used the girls as measuring sticks—Rachel is 41 inches, which is approximately 3.5 feet, so after sticking her in the hole we knew we had a ways to go. 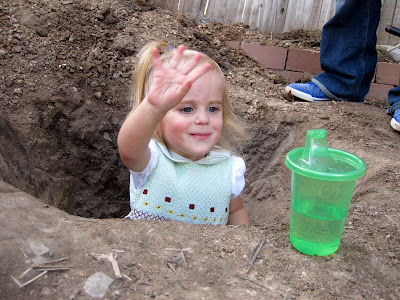 Miriam was pretty comfortable about being in the hole...but it kept getting deeper every time we put her in it and she started to get a little nervous towards the end. 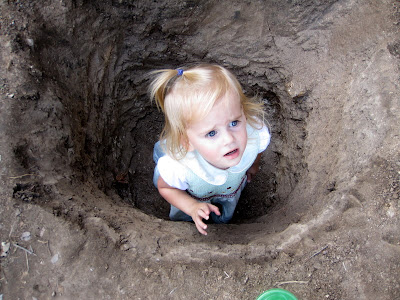 By the time the boys were finished working their hands were covered in blisters. Andrew is still sore from all the jumping and shoveling he did. I've come to the conclusion that if Andrew ever did happen to bury a body in the backyard (something that's been a family joke since his botched polygraph test with the NSA in 2007) I'd definitely know about it. Not only would it take him hours to dig a hole large enough, but he'd be complaining about his shredded hands and sore back for days after. So no worries, NSA interrogator.
Eventually we were able to lay our sweet kitty down to rest. It was a sad (but necessary) moment.
Rachel was pretty sad when I told her that Lakhi had died. She asked a lot of questions about how Lakhi died and I told her that we weren't quite sure but it was rather stormy out the night she died and it was possible that a driver didn't see her and hit her with their car or something.
During sacrament meeting she drew this picture: 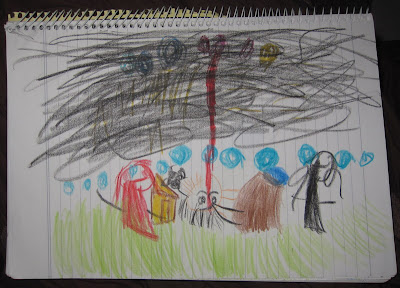 Apparently all Rachel took out of my cause-of-death explanation was "stormy," "hit," and "died." She drew a picture of Lakhi being struck and killed by a bolt of lightning. Josie (in red) and Naanii (in black) are watching from the sidelines.
Oh, boy...
Posted by Nancy at 1:02 AM