Dorothy I and Dorothy II

This morning the girls decided they'd play dress-ups. Rachel chose to dress up as a pioneer so I helped her into her bonnet and buttoned up her dress and she skipped off to the living room to begin playing. Miriam and I dug around in the dress-up box for a while until we found the Sleeping Beauty dress—she hadn't worn it before today but she let out a longing sigh when she pulled it out so I helped her into it and bunched it up in the back and tied it with a hair elastic so it wouldn't fall off. 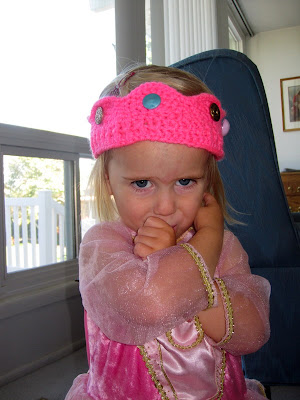 She skipped off to the living room to join Rachel, who threw a fit upon seeing Miriam wearing her dress! I tried explaining to Rachel that it belonged to both of the girls and that if Rachel hadn't chosen to wear it then Miriam was well within her rights to wear it but Rachel wouldn't listen to reason. She stormed off to her bedroom and slammed the door.
A few minutes later she emerged in her Dorothy dress, dragging Toto along behind her. 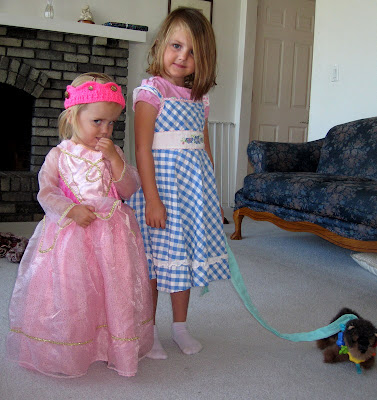 Things were better for a while...but then jealousy set in again. I told Rachel that this was Miriam's first time ever wearing the Sleeping Beauty dress and that Rachel had worn it lots of times—hours, days, weeks worth of times. This was Miriam's time to wear the dress and Rachel would get another turn later.
She raged.
I told her that she was coveting the dress—that Satan was telling her that wearing that dress is the only thing that will make her happy and that wearing that dress was more important than her relationship with her sister, but that Satan is a big liar and what he was telling her simply wasn't true.
She fumed.
I told her that all I wanted to do was have her and her sister stop screaming at each other so that I could scrub the toilets in peace, which is something I never thought I would ever say. (Really—"I just want to scrub the toilets!"—I said that. My wants sure have changed from the time I was four.)
She kept screaming.
I told them both that if they didn't stop fighting over the dress it would be put in the DI bag and I'd have Daddy drop it off when he came home from school/work today. Suddenly neither one of them wanted to wear the dress anymore.
"You can wear it, Miriam. It's okay."
"No! Rachie's turn! Not Mimi's turn!"
"No, Miriam. You wear it."
"No. Rachie. Wear it! Take it off now."
"No, no. Miriam it's your turn! You can wear it all day!"
In the end I suggested that we put the dress back in the dress-up box and let Miriam choose another costume. She chose the Dorothy dress that Rachel got for Christmas last year (which now doesn't even cover her behind). They dug through the box and found a pair of ruby slippers for each of them, dug through the stuffed animals and found puppies for both of them, and then I put the soundtrack to the Wizard of Oz on and they danced around the living room together. 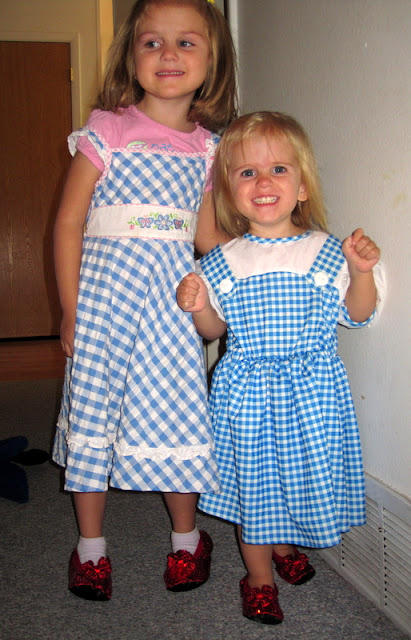 I scrubbed the toilets.
And we all lived happily ever after. The end.
Posted by Nancy at 4:35 PM