Sheesh—I promise we'll stop celebrating Andrew soon. His birthday is officially over after today so I don't think we'll be celebrating any more.
What is this—day 3?
As I already mentioned, my family came over for dinner last night and since we had people over and knew we wouldn't be home tonight we decided to open presents a day early. He opened Rachel's present first—she was so excited she could hardly stand it. She hand-picked his present...from the basket of Easter candy that's been sitting around since...well...Easter. She drew a card and wrote DADDY on it and wrapped up the candy and tied a nice pink ribbon around it. She was so proud. 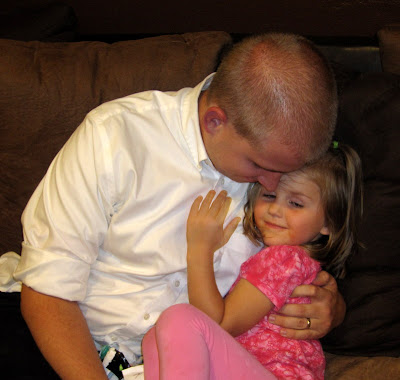 When he opened it he acted really surprised to find old Easter candy inside. I think he really was surprised, actually—he wasn't just acting. Rachel took his surprise for excitement and ran over to him and gave him a big birthday hug.
It was so thoughtful of her to find a gift for him.
The reason she was working so desperately to find a gift was because I made him a gift last week while Miriam was napping one day and Rachel decided that she wanted to make him a gift, too. I told her she had to come up with her own idea because I was busy with my gift at the moment. She tried multiple things but settled on a bag of old candy. Too funny.
I made Andrew a cross stitch of Yoda using some pixel art he showed me a while ago as a pattern. 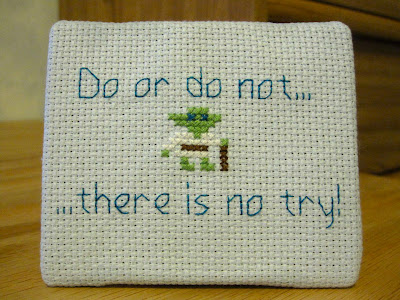 He was really excited to open that gift, too. 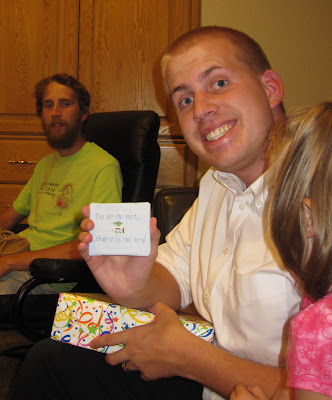 We were also excited for my mom's present—movie tickets and free babysitting!
This morning instead of coming out of their room when they woke up, the girls just played together—they didn't wake me up until 9:30 and it was wonderful. Happy Birthday to me! I mean...Andrew. Happy Birthday to Andrew, who had to leave for school at 7:30 this morning (and didn't even wake me up to say goodbye because he loves me that much—sometimes a good sleep-in is necessary).
We started making Daddy's birthday cake right after breakfast. It was a lot of work and by the end of the process I was going a little bit crazy—I nearly cracked an egg into the garbage can instead of the mixing bowl. I honestly don't know where my brain has been recently—perhaps it's been on a red light. 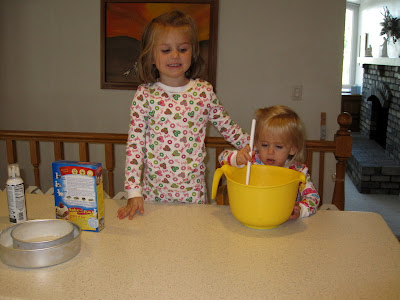 This evening the group Andrew went to Ghana with this summer was having a little reunion so we decided to decorate his cake like the Ghanaian flag. I didn't want to mess with mixing red or black icing so we bought some premixed at the store. The red was easy enough to use (though I had to thin it down a bit) because it came in a tube. The black came in a can like this one (only the can I bought was not nine dollars! So don't buy it on Amazon!) and kind of remind me of easy cheese—it even said on the can that it was easy to use. It was not easy for me to use, though. I had to push so hard to get it to come out that my whole arm would shake—it was like a hose out of control. I had no hope of making a pretty design that way so I ended up glooping it in a pile and then using a toothpick to draw my stars. It was a painstaking process. 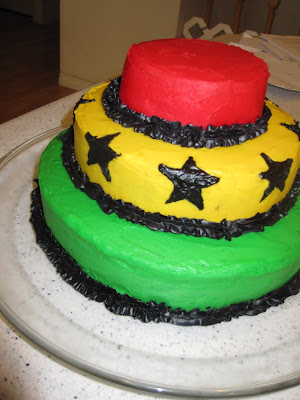 In retrospect I probably should have squirted it all into an icing bag to begin with...but then how would I have stored the left-overs? It turned out alright, anyway, though I suppose it wasn't specifically a Ghana cake. It could have also been any number of the Pan-African-coloured flags—Guinea-Bisasu, São Tomé and Príncipe, or even the flag of the Union of African States. It really was meant to be a tribute to the flag of Ghana, though. 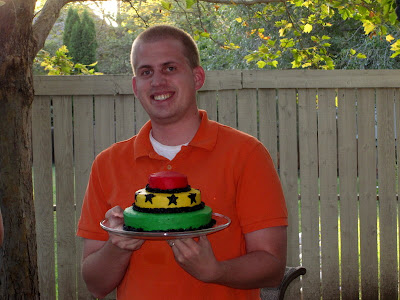 It was fun to get to visit with Andrew's classmates and teachers. And it was especially nice of the Agles to plan such a nice birthday party for Andrew (and host the Ghana reunion, of course)!
We all sang happy birthday to him (the girls and I sang from the pool with a couple other people, where we were hanging out—they have a lap pool in their yard...2 lanes, but still...that's cool!) but we didn't have any candles so it was a little anticlimactic when we finished singing. Andrew was a sport, though, and made sure to blow all over the cake, anyway.
Andrew was especially excited for this party because he found out just before we left—literally just before we left—that he'll be going to Ghana again next year! This time he'll be the TA, which is nice because it means he'll get to be the TA for the prep class next semester, which is nice because he's a TA this semester but that job ends in December. It also means that his way to Ghana is paid, which means that we don't have to come up with the money to send him there this time...which is so, so nice.
What a great birthday!
Posted by Nancy at 12:11 AM