We found a great deal for a brand-new bike in the KSL classifieds. We also found an even greater deal on a used bike. After a moment's deliberation we decided to spring on both bikes. We have a little tricycle that my sister gave Rachel for her birthday last year—but it's missing a part so the front wheel skips a beat every so often when you're pedaling and it makes it rather difficult to ride. We're hoping that a "real" bike will help Rachel be able to ride better and faster. She wants to be able to ride a bike so badly. So far it's been pretty rough. 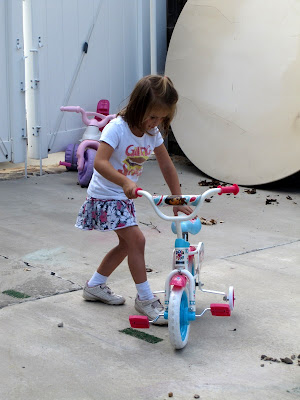 Granted, I haven't let her out of the backyard yet. A longer stretch of sidewalk might do her justice—in the backyard she is always having to turn her bike around the minute she gets any momentum behind her pedaling. 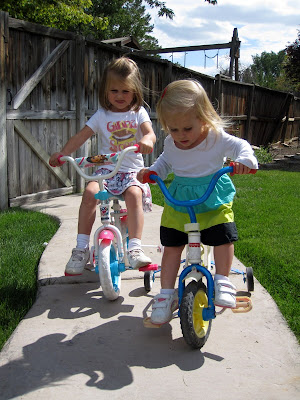 Ordinarily I encourage the use of helmets but since we were in the backyard and there are no cars and it's mostly grass I figured they'd be okay to play around without helmets. Both of them have already scored some skinned knees from tipping their bikes over. How they managed to do that going zero miles per hour is beyond me. 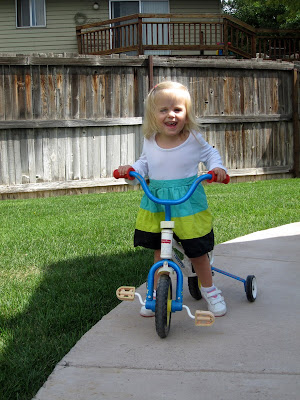 Miriam was a little bummed about having the beat-up bike, but it's slightly smaller than the new bike so it's the one she gets to ride. When she threw a fit about it not being pink I told her she was welcome to ride the tricycle, too—it works just as well for a little one who can't reach the pedals, anyway. After she knew she had a choice between pink tricycle and blue big-girl bike she stuck with the big-girl bike.
She can switch back to the trike at any time, even though Rachel insists that it is still hers.
When we were all sick of riding bikes...and a big rain cloud rolled in...we went inside to play with blocks. 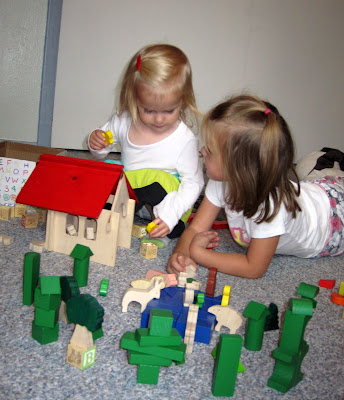 Sometimes we have good days.
Posted by Nancy at 4:23 PM