I took both the girls to see the musical of Little Women today—tickets courtesy of my friend Becky who was in the show (and who did a great job!). My mom and Josie came, too—it's Josie's favourite musical. I was torn for a while about whether or not I should take Miriam with us. She had been complaining about being tired for a while and Andrew said he'd put her to bed but she was devastated at the thought of being left home alone (shades of Amy coming out, I suppose) so I relented and let her tag along. 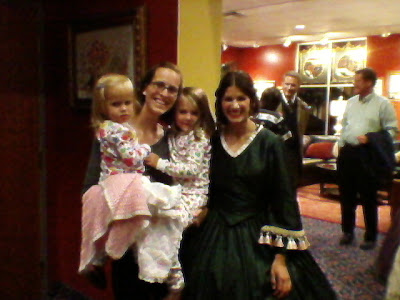 The show was wonderful and the girls behaved themselves pretty well, so that helped me to enjoy it all the more. My favourite scene, I think, was the kite scene, where Jo and Beth are at the beach. They had rigged some kites on wires so that they actually looked like they were flying. And the scene was so touching—I bawled almost the whole way through (and, you know, through the two scenes before that, too). I just love Beth and I always hate it when she dies. It seems no matter how many times I read the book...or watch the movie...or the musical...she always dies. Every single time. It's so frustrating.

My favourite song was Off to Massachusetts, simply because I know that it best, thanks to Josie. But really,  Some Things Are Meant to Be was wonderful, too (and made so much more sense while I could see Jo and Beth flying a kite together), and Small Umbrella In the Rain.


As Rachel said, when I asked her what her favourite part was, "I loved the whole thing!"

She was curious about a few things—what a war is, and if the people we were watching were real people, or just pretend.

"They're real people," I explained, "But they're acting—they're pretending to be the people in the story."

Later, after Jo cuts and sells her hair, Rachel leaned over and said, "I told you she was a real person!"

"Well, if she's just pretending then why did she really cut her hair?"

Also, she was wearing a wig. Un-touché!

The part of the show after intermission was a bit harder for my girls to watch—though it was shorter. I suppose by this time all the March girls had grown up and were not off doing fun things like going to balls and skating and putting on silly plays and such. Instead they were all busy falling in love and getting married, which doesn't seem like much fun when you're two and four (though when you're 24, it is).

Near the very end of the play when Amy's wedding preparations are under way and it's threatening to rain, a clap of thunder rumbled through the theater. Jo was just meeting up with Professor Bhaer, so the audience was waiting with bated breath to hear them declare their love for each other. Miriam, though, wasn't interested in the romance and was busying herself by climbing up and down the stairs in the aisle (yup, I'm that parent). She was so startled by the sudden clap of thunder that she screamed, "NO!" and ran back to sit on my lap.

I heard chuckles from the rows surrounding us so at least her outburst seemed to be taken with good humor.

It was a wonderful show but we didn't get home until 10:45 PM, which made 9:00 AM church a little rough this morning...and the afternoon all the more interesting. But the girls are in bed asleep now and will reboot (hopefully) happily in the morning.
Posted by Nancy at 11:43 PM