Well, we did it. We took our cub scouts to Cabela's. We hit up their aquarium first so that we could identify our five varieties of fish but only got as far as catfish, rainbow trout and bluegill before we were dead in the water. So I grabbed an employee who was wandering through a fishing pole forest to help us out. He was Santa Claus in a fishing vest if I've ever seen one.
He asked what I needed help with.
"I'm here with my cub scouts and we need to identify five types of fish, but I know nothing about fish, so...I'm hoping you can help us with that."
"Well," he said, "You've got your big fish, your little fish, and your medium fish. Then there's your cold water fish and your warm water fish...and that's five, right?"
"Right...but I mean...could you tell us what kind of fish are swimming in the aquarium?"
"Naw, I'm just kidding! Of course I can!"
He then proceeded to name the fish like I name letters of the alphabet. It was rather impressive.
"That's your rainbow trout, your walleye, and your pike. Then you've got your large-mouth bass, your small-mouth bass, your catfish—that there's an albino rainbow trout—and your coho salmon. They turn red in the fall."
"Kind of like leaves," I said.
Sometimes I make stupid comments. I could tell this was one of those times from the look on Santa Claus's face after I said that.
After our angling Santa Claus left, I quizzed the boys on the kinds of fish I could remember. They had been listed and pointed out so fast that I only bothered remembering two other kinds—salmon and walleye—because they were the easiest to identify. That might sound like cheating, but it's not. Remember we already identified three fish on our own. Also, the salmon were pretty obvious...since it's fall and all.
With that requirement out of the way we went on to tour the other animal displays, which, as I've mentioned before, are quite impressive, if not overly dramatic. I mean, how do I warn this deer? 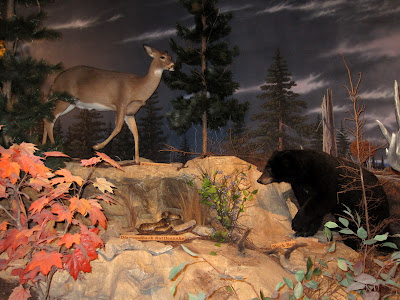 Watch out, deer, there's a bear! Run, quick!
Not that way! Look out—rattle snake!
How about this one? 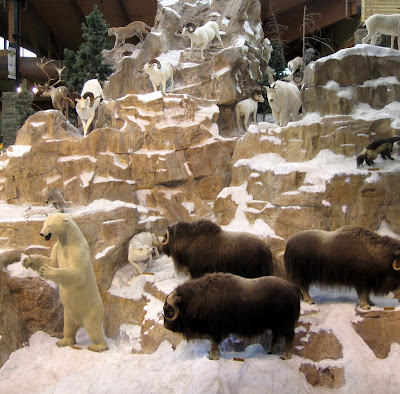 Mountain lions and polar bears and wolves! Oh, my!

And does that little wolf at the bottom really think he's going to take on a whole herd of musk ox...let alone one? Come on.

Yes, there are multiple ways each animal in the display could die at any given moment. It's as if the taxidermists were intent on having the animal die, which is cruel considering the animal is already dead. They even had a hunter in the display, though he, luckily, was animatronic not taxidermic. It was still relatively creepy.
The kids all really liked the displays though, even though the boys just wanted to go off and find the video games. 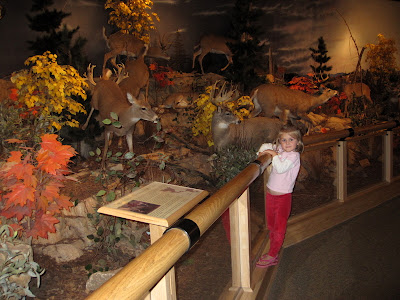 We also discovered their Africa corner—I don't know why we didn't see that last time. 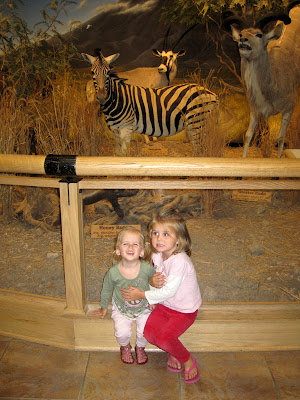 It was, once again, a little dramatic, but that's what makes it fun! I think we saw more action in this still display than our friends in Harare saw at the wildlife preserve near their house. 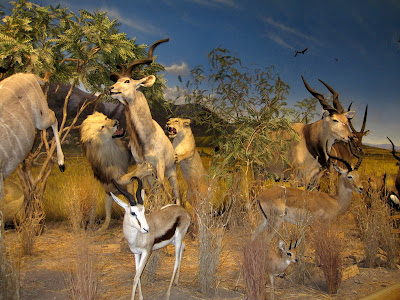 After we'd been there for about forty minutes we told the kids it was time to leave.
"What?!" asked one of our cubs, "We've only been here for like three seconds!" 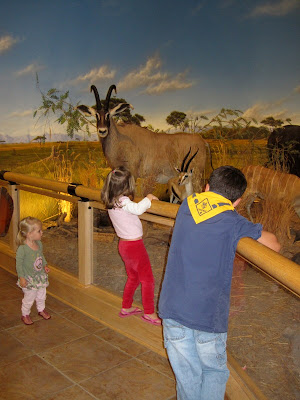 So apparently they enjoyed themselves.
The ride home was a little dicey, even though we had packed snacks to keep the kids happy. I've got my tricks, though, and threatened the boys that whoever touched the other next (we only have two cubs right now) would have to sing Twinkle, Twinkle Little Star for everyone. That got them quiet pretty quick. There's nothing worse than being forced to sing a baby song in front of your peers (or, in this case, peer).
Before we left, Andrew and I put on our scout shirts so that we could look all official and pack-like while we were on our field trip. Miriam noticed that I had an American flag sewn onto my sleeve.
"Flag—mommy's shirt!" she pointed out. Then asked, "Why? Why flag—mommy's shirt?"
We're definitely in trouble—I think the "why" stage has begun.
Also Miriam apparently doesn't know what a preposition is.
Posted by Nancy at 8:44 PM