I can't tell who is up—either Miriam is talking to herself, which is a possibility, or she's talking to Rachel, which means they're both up, which means getting up for school tomorrow is going to be a bear. Also, someone is kicking the wall. Whatever...

So far we've survived a week and a day sans Andrew.

I have a few theories regarding this:

1) We must not have handled last year's trip very well.
2) We are handling this year's trip much better than last year's.
3) This year my children are 2 and 4 instead of 1 and 3, which is better...somehow.
4) Andrew must have been busier than we thought this past semester since the difference between having him "home" and him being on the other side of the world is negligible.

I'm not sure how well we handled last year's abandonment trip. In my memory it wasn't that horrible. However, the only memory of that time that's been surfacing this week is his homecoming—we went to the park minutes after he came home and had a glorious afternoon, all four of us. Last year he missed Easter and Stake Conference and Mother's Day—boom, boom, boom, right in a row! It was also the longest we'd ever been apart since getting married.

This year I went into the trip knowing that I was capable of handling him being gone this long. Also, he was here for Easter and he'll be back in time for Mother's Day so all he missed was Stake Conference.

Besides, we're used to having Andrew away. This past year his schedule has been so awful that we hardly ever saw him, anyway. Having him be halfway around the world hasn't been that much of an adjustment (no offense, Andrew). You mean I don't have my husband around to help put the kids to bed or make dinner or do the dishes or anything. Big deal. The only chore I've picked up is taking the trash out to the curb. (Suddenly I'm remembering why I was so excited for the end of this semester...because it was awful, that's why.)

I'm not sure which factor is contributing the most to our superior coping skills (as compared to last year's) and it might be too early to really judge if we've handled this trip better or not (since it isn't even halfway over yet) but knowing that we are coping helps me believe I can keep coping for the rest of the time Andrew's gone.

Besides, if everyday goes like today we should at least survive. We had several trying moments but a few really beautiful ones helped balance things out perfectly, like when Grandpa asked Miriam what her bib said and she answered, "It says, 'Mom is the best!'" even though it really said 'Mommy's sweetie.' Or when I checked on the girls in the living room and Rachel put her arm around Miriam and said, "You don't have to worry about us, Mom. We are not only sisters; we're best friends." 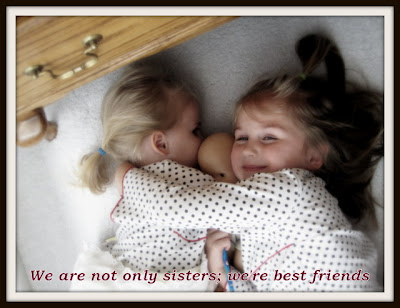 Of course, minutes after this picture was taken Miriam kicked Rachel in the face and everyone ended up in tears.

Oh, I'm sorry. Did that ruin the cute factor for you?

Well, it ruined it for me too. But it was beautiful at the time.

For Family Home Evening we baked Pineapple-Banana bread (I was praying for patience the whole time, believe me) and then took a loaf to one of the women I visit teach because...it's the last day of the month, didn't you know? She's been harder to get in touch with since she's started her new job because she used to be home during the day and now she's not...so she totally threw off our groove. Anyway...

We read from The Friend while we waited for it to bake and called that our lesson and when the bread was finished we walked it over to my visiting teachee's house with me holding the loaf in a hot pad (because it was seriously straight out of the oven) in one hand while dragging Miriam along with my other hand. Rachel skipped along beside us and then (since we were moving so slowly) in front of us until she was out of sight and around the corner.

I heard her scream and then saw her come tearing back around the corner with two little shih tzus right at her heels barking up a storm.

Miriam scrambled up onto my hip and Rachel clambered up the other side.

Picture me 29 weeks pregnant, holding a two-year-old and a four-year-old and a now-squished loaf of pineapple-banana bread, while two little shih tzus bounce around my ankles wanting to play. I'm sure we looked ridiculous. And we didn't move one step forward until our neighbour came out to herd her dogs back inside. Mostly because we couldn't. At least, not without dropping children or stepping on puppies.

We made it to my visiting teachee's house and even though it was almost 8:00 PM and she has a three-year-old I rang her doorbell. She answered and her kitten streaked out the door. Miriam jumped into my arms again but Rachel, who wasn't quite up the stairs when the door opened, simply bolted. We had a nice impromptu visit, anyway, even though I had to cut our conversation short.

"I'm sorry," I said. "I'd love to chat longer but I really have no idea where Rachel went and I should probably go find her..."

So we set up an appointment for next week (which is not the last week of the month; it's the second...go my team) and then Miriam and I struck out to find Rachel, yelling her name and scanning the sidewalks.

She came running down one of the more familiar-to-her cul-de-sacs in our neighbourhood—where her school is and where two of her good friends live.

"Well, I don't really like you just going for a walk without telling me where you're going. It worries me. You're a little young to just disappear like that."

Smartest thing I did all day was have the girls change into their pyjamas before we went on our walk, though. That way when we got home all we had to do was have a piece of bread, brush our teeth, read scriptures, say prayers, sing songs, and go to bed. If we didn't have our pyjamas on already it would have been a lot more difficult to get the ball rolling.

I'm figuring things out. I'm a survivor.
Posted by Nancy at 1:00 AM