On Thursday when Andrew came home it was much too windy to do much of anything outside and we spent most of yesterday running errands (and sending Rachel to school since she skipped school on Thursday to come to the airport) so today was our first day playing outside together.

Reid and Karen's BYU ward had a date night afternoon at Kiwanis park and we crashed it with the girls. The main activity was kickball, using baby pools as bases. While "the big kids" were eating lunch our girls had a heyday in the pools (even though the water was freezing cold, right out of the tap, and it wasn't altogether warm outside yet, either). Karen had said that we wouldn't be swimming so I didn't bring swimsuits for the girls. I also didn't bring extra clothes for them. Because I'm so smart. 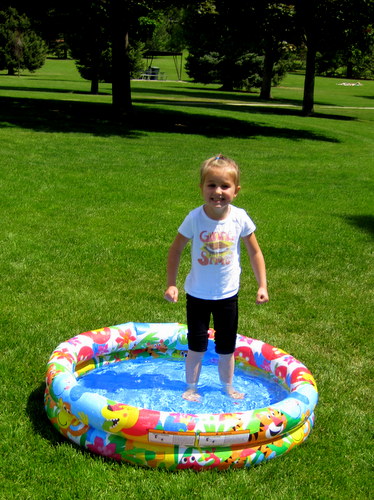 Fortunately, my girls believe in dressing in layers and Rachel had a jumper on over top of her pants and shirt so we took off the jumper and let her soak her pants and shirt. Miriam was wearing an undershirt, a t-shirt, and a skirt (but I had extra underwear and a pair of pants for her in the diaper bag (because I'm so smart (and I'm not even being sarcastic this time))) so we stripped off her t-shirt and let her run around in her skirt and undershirt. 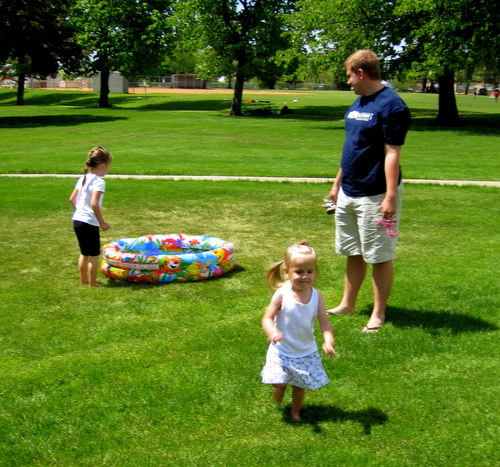 At first they were being relatively careful—stepping in and gently splashing—but they ended up getting drenched. 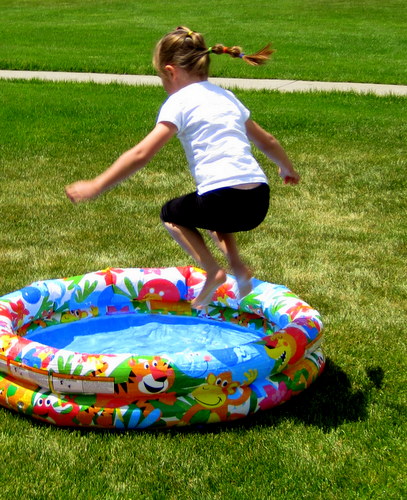 Rachel is much more hydrophilic than Miriam is. 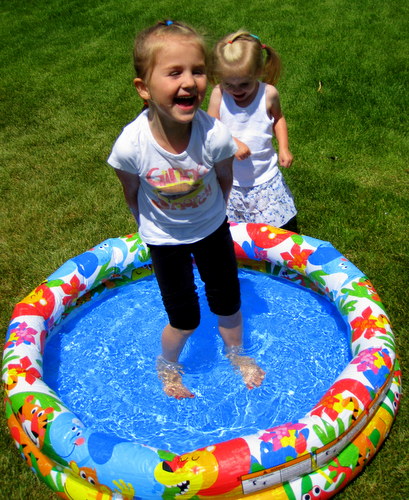 Miriam tried to be brave... 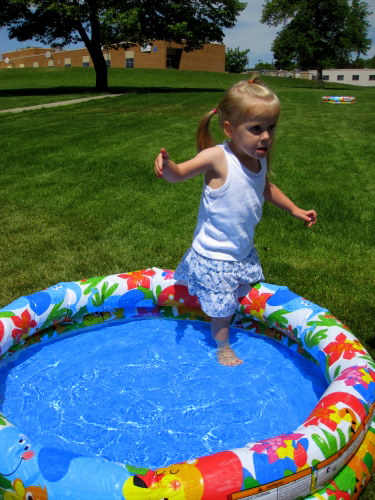 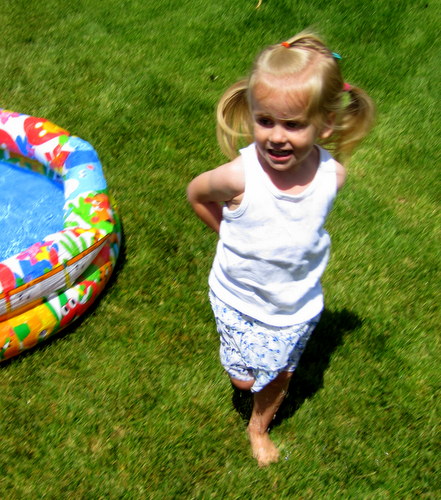 And Rachel did her best to terrorize help Miriam get used to the pool... 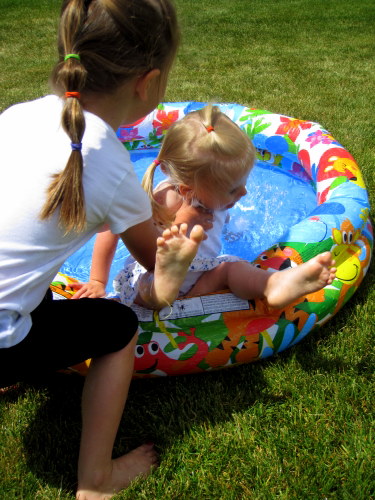 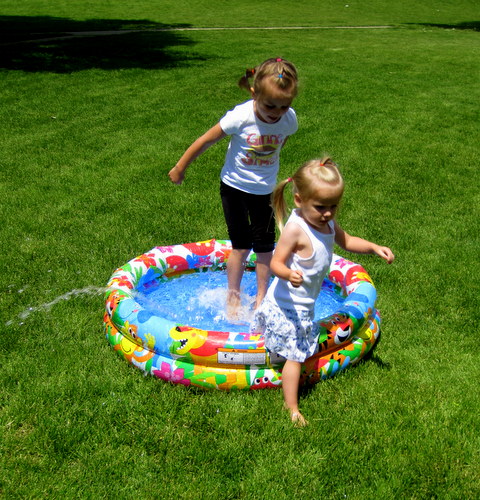 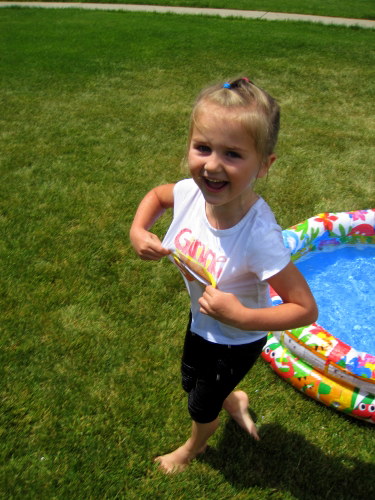 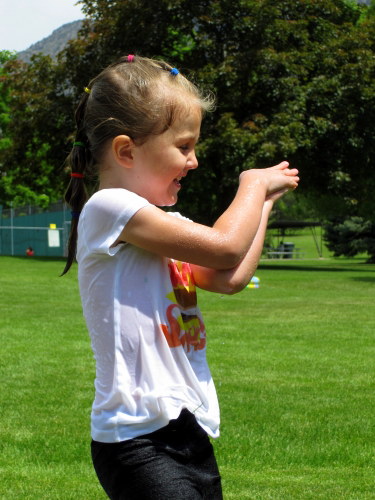 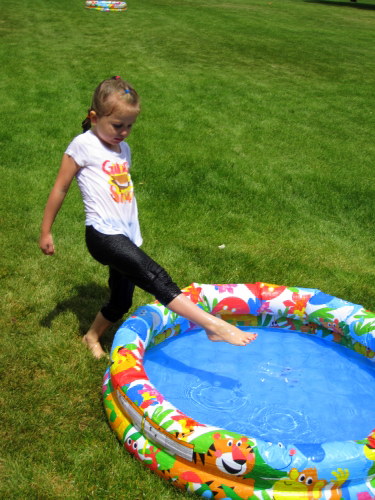 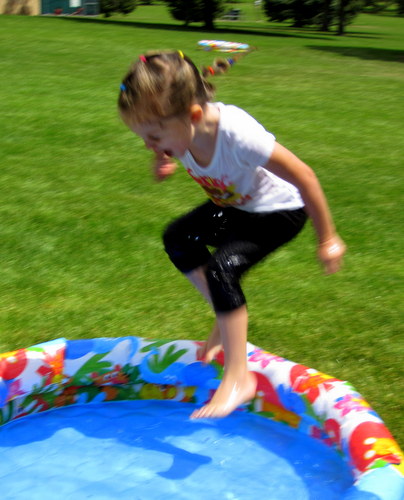 Miriam was able to let her hair down a bit, though I do believe the top half of her stayed mostly dry. 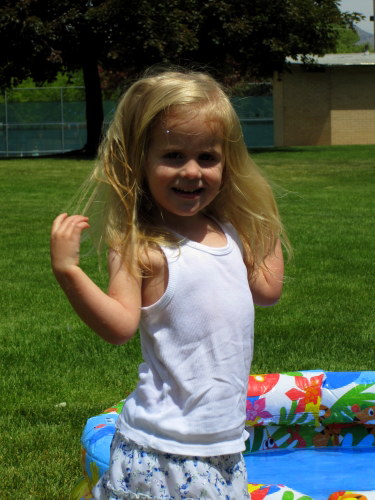 When we were all finished playing, we sat shivering on towels, eating pizza. Then we got dressed in dry things and even though it was just starting to get warm enough that I wouldn't have minded wading in the pool, the girls opted to wear sweaters. They were covered in goosebumps! 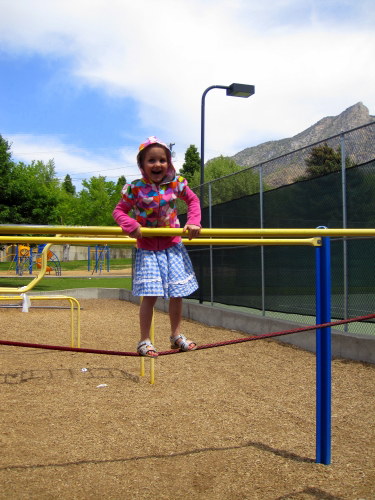 We explored some of the playgrounds for a while before heading home. 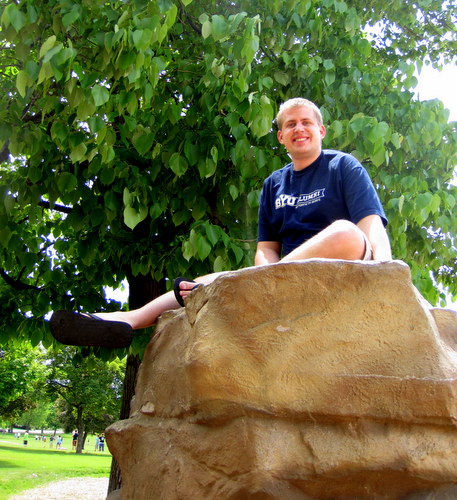 The girls had lots of fun playing with their daddy. 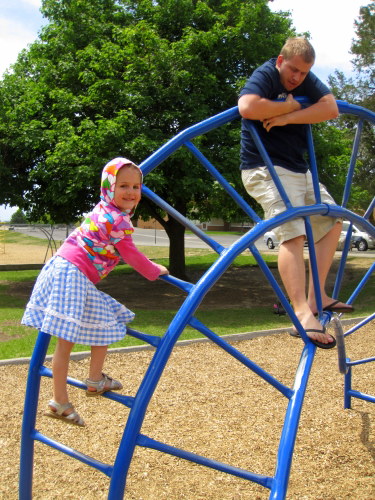 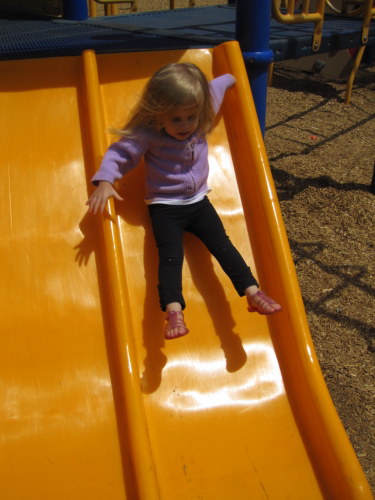 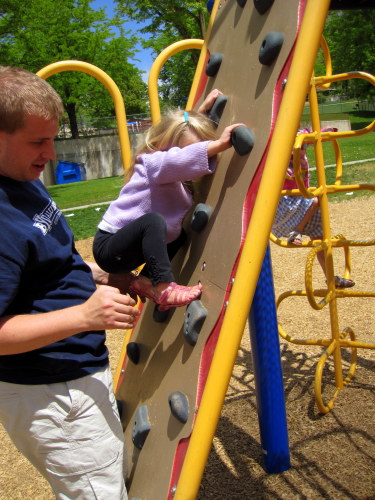 And with each other a bit, too. 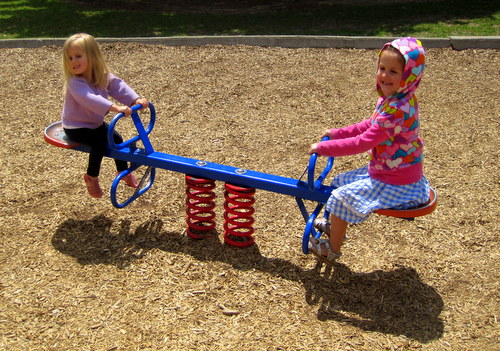 Daddy showed them how to hop-scotch. 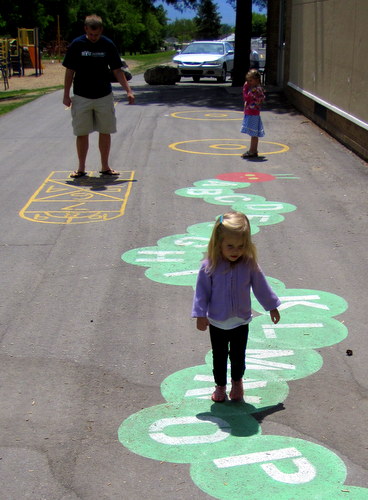 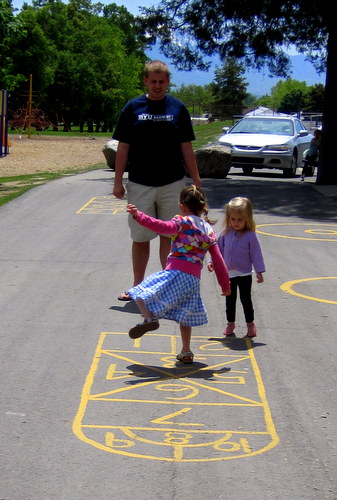 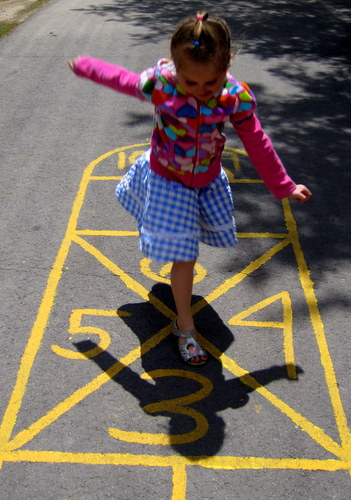 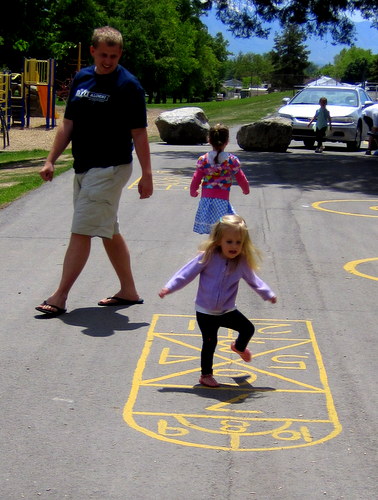 There was this cool rope "spiderweb" that we had fun climbing on. 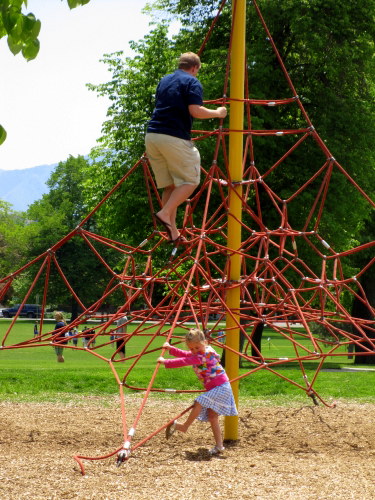 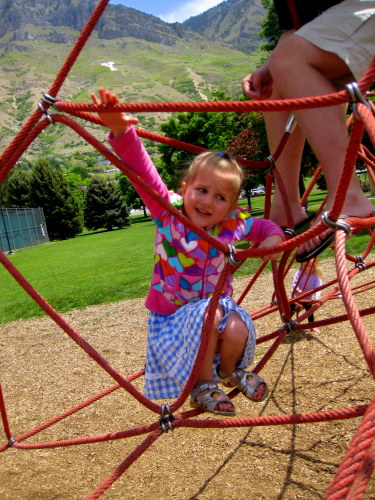 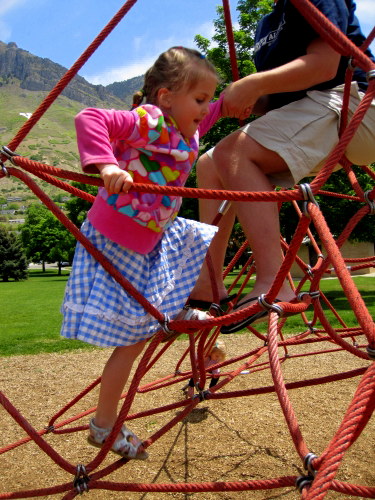 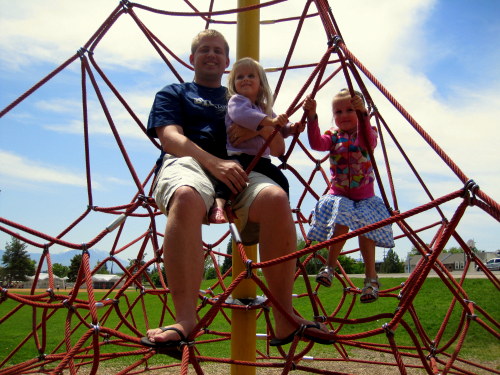 I was there, too. Mostly I took pictures of everybody else. But I did a little bit of playing as well. Rachel now thinks I'm the world's best climber. If only she had met me when I was six—I could climb anything then. Now that I'm thirty weeks pregnant my climbing has slowed down a bit. 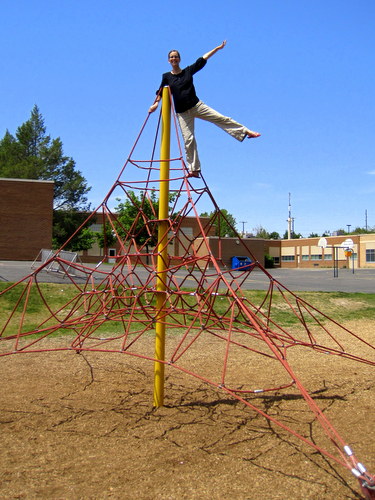 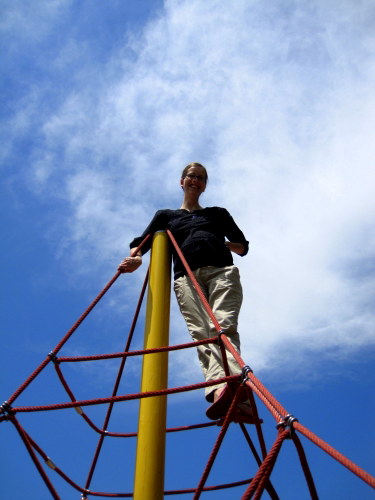 Hopefully these kiddos sleep well tonight because guess what we did when we got home...put the pool back up and let the girls swim in the sunshine some more. With that much sun and water they should be exhausted!
Posted by Nancy at 9:37 PM