What time do you go to the dentist?

"What time are the girls' dentist appointments?" Andrew asked me this morning.

"Yeah, but what time are their appointments?"

"So when are we going to the dentist?"

"Are you sure? Because who actually goes to the dentist at 2:30?"

"Did they change the time of the appointments? You're the one who talked to them on the phone yesterday," I said, wishing that he'd just get to the point.

"Don't you get it? It's like that joke: What time do you go to the dentist?"

Sometimes I can be a little slow. Today is no exception. In fact, today would be the definition of slow. I've been dragging all day. This cold is kicking my trash. So much for exercising daily to use up more glucose with less insulin. Today my pancreas can just do its stinking job (except that we went out to dinner because it's Shayla's birthday and her family was all busy leaving her alone so my blood sugar was a little too high even though I got a black bean and chicken burrito without rice and didn't eat any chips. Sheesh. So later I went on a "diabetes walk" even though what I felt like doing was curling up into a ball and falling asleep. When is this cold going to end?!).

The dentist appointments went surprisingly well. We haven't taken the girls in for a while because the last time I took them in it was just awful. Rachel screamed, needed full-body restraint, and nearly bit the dentist's fingers off. All he did was count her teeth before kicking us out of his office with a clean bill of health and stressing that Rachel should floss her teeth to avoid getting cavities...thus avoiding trips to the dentist.

Rachel certainly took that advice to heart and has been the most dedicated flosser I have ever met in my whole life. She has flossed religiously for two years. She almost cried the first night we were in Grover because I had forgotten to pack floss—fortunately, Grandma had some handy.

"Mom! The dentist said I have to floss everyday! How could you not pack floss?!"

Fear tactics work amazingly well. In the past two years I haven't nagged her about dental hygiene once.

All of her dedication certainly paid off because she is 100% cavity free.

After yesterday's experience at the doctor's office Andrew decided that he'd better come to the dentist appointments with us (just in case we needed some extra muscle) but today's appointments went much better than I expected. Still, I was glad he was there.

The clinic is wonderful—Children's Corner Pediatric Dentistry in Lindon—they were so good with the girls.

Part of the paperwork was a list of adjectives that I was to check off if they described my children:


I think they may have actually read through that list before they even attempted to interact with the girls because they approached them completely differently.

They treated Rachel as a healthy, high strung, friendly, moody, suspicious, active, fearful, defiant, and talkative, temper(-mental...because "temper" isn't really an adjective, is it? But I always feel dumb pointing out mistakes like that on medical (or in this case, dental) forms) child. She just about died when they called her from the waiting room and so they said she could choose a parent to come with her—she chose me. She flipped out about getting x-rays of her teeth but the hygienist was able to sooth her by explaining everything 50 times over. She shook her head when she was asked to climb onto the examination table but I got her up there with relative ease.

Then the hygienist asked if Rachel would rather she clean her teeth with her fancy tools or a regular, ol' toothbrush. Rachel immediately chose the regular, ol' toothbrush and then relaxed a bit when she realized that there were cartoons on the ceiling (each booth had a personal TV). She sat up as soon as the hygienist was finished and demanded to be permitted to spit somewhere, so the hygienist handed her a cup to spit into. She remained sitting until the dentist (Dr. Segura) came and introduced himself and then she unwillingly laid back down so that he could look at her teeth. 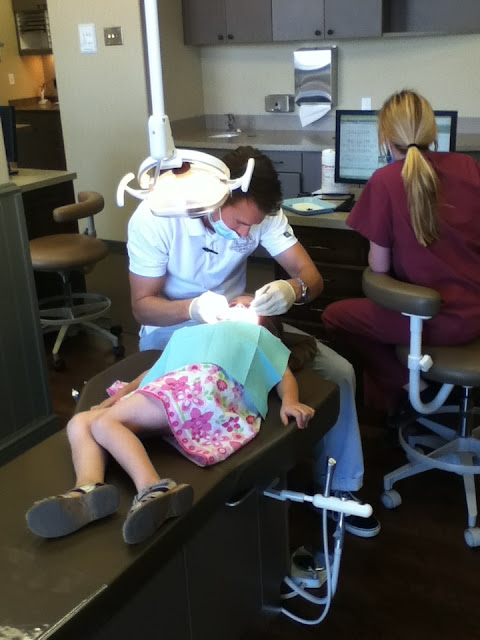 He said they're beautiful and to keep doing what we're doing. Oh, and her frenulum looks fine.

Miriam was treated as a calm, healthy, friendly, cooperative, talkative, (sometimes) fearful child. She marched right in to take her x-rays and when the hygienist asked her if she liked to take pictures said, "Know what? I do like to take pictures but I never took pictures of my teeth before!" She sat calmly through the whole process.


She relaxed right onto the examination table, spread eagle, with some headphones in, and allowed the hygienist to use all her little tools, giggling a bit because it felt funny. She wasn't given the option to decline the tools in favour of a toothbrush. 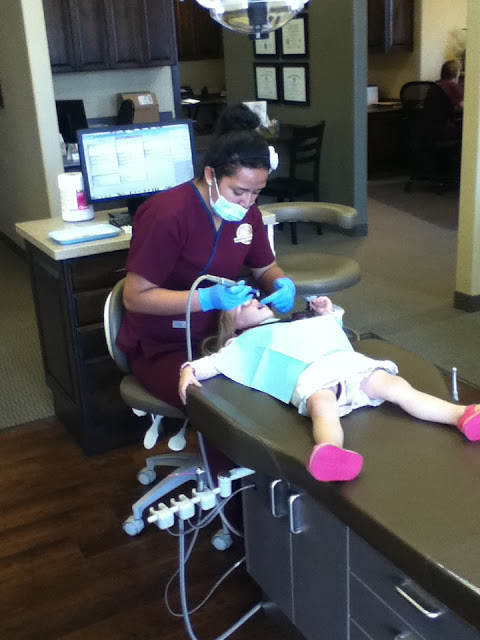 The girls got new toothbrushes and their own toothpaste and floss in addition to getting to select a prize (Rachel chose a pinwheel and Miriam chose a princess sticker).

They tried to get us to make another appointment in six months but, while we'd truthfully love to, we can't...because we're moving. I wish we had found this clinic sooner because it was such a positive experience for the girls (and...they accepted us as new patients even though we're on Medicaid (which is why we haven't been to the dentist in forever because we haven't been able to find anyone who wants Medicaid patients)).

The girls both used their new toothbrushes and toothpaste tonight (but not the floss because they prefer to use the little flossers instead of the tape, which is understandable because they're so much easier to use) and were so excited about it.

Hopefully we'll be able to find as nice a place in North Carolina...
Posted by Nancy at 10:53 PM