Our friends from Egypt—Josh and Carolee—were in town this week. They're due with their first baby just a week after we're due with Benjamin so Carolee's sister threw her a baby shower today. When I got invited I promptly put it on my calendar and then forgot about it...until this morning. 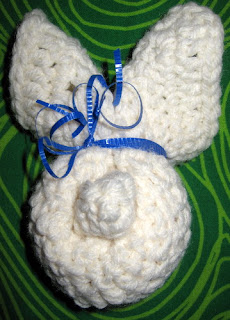 So I quickly made a little baby washcloth and made a "bunny roll" out of it. We wrapped up a package of wet wipes and used the cloth as the "bow." I'm a lame gift-giver, I know. It's even worse for boys than for girls because for girls you can always whip up a few flowers and hot glue them onto barrettes or something. But for boys...I got nothin'.

The shower was fun. It was nice to see Carolee and Josh again and the girls had fun eating and eating and eating. The theme for the shower was "Ships ahoy! It's a boy!" so they had buckets full of popcorn, Swedish fish, and goldfish crackers with shovels for servings spoons. They had decorated an angel food cake as a bouy (with while frosting and strawberry stripes) and had ship-shaped sandwiches. It was all very cute.

We also got to decorate some onesies with some iron-on decals. Miriam chose a fish and Rachel chose a circle. I even let them do the ironing, which they thought was cool. They started to get a little crazy wound-up toward the end so we left to go to the park, but not before snapping a few pictures of us with the Schillings: 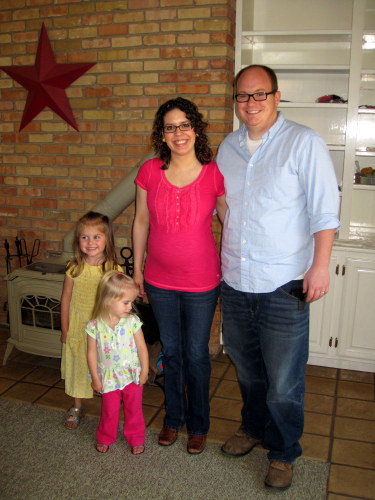 Josh and Carolee used to spend a lot of time at our house (to do their laundry and use our internet...but also because they think we're cool...right, guys?) and even babysat for us a few times when we went out. One time when they were babysitting Josh was holding Rachel on his lap, reading a story to her, and she...wet her pants. Everyone thought it was pretty funny at the time, except for Josh. He thinks it's funny now though... Rachel thought it was hilarious.


And here's a picture of me and Carolee (that I don't really like because my shirt is hanging funny...) with our baby bumps (...and because it's hanging funny you can't even see my baby bump): 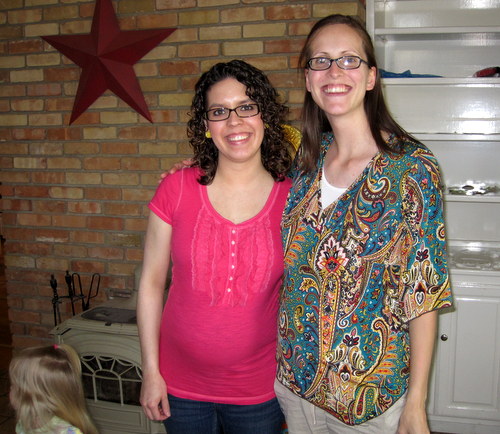 Carolee's sister doesn't live too far from our house so even though Grandma dropped us off and offered to pick us up, we decided to walk home. There's a park about halfway between our houses so we stopped there for a "rest." It was just as far as walking to the park and then home again so it didn't even feel like a long walk at all.

The girls had a ton of fun at the playground overall but poor Miriam had a hard time with a few things and came home with some battle wounds. First she wanted me to help her with the swings but was too impatient and tried to get on by herself (to swing on her stomach). She pitched too far forward, though, and landed right on her head. She cried for a while but got over it soon enough and asked if I'd help her sit on it properly so she could swing for a while (I didn't even notice until tonight when I was giving her a bath that she has a bit of a bruise/bump). 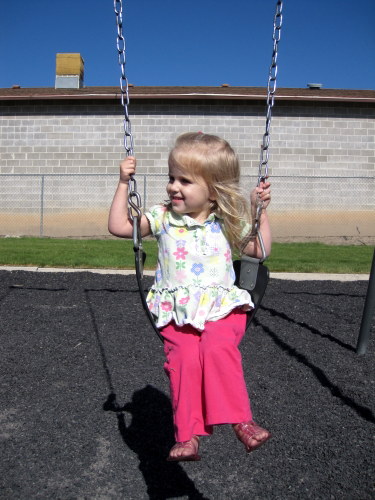 Later, when we were "playing basketball," she got knocked over when the basketball hit her while she was running full-speed ahead and she fell down and scraped her knees. She acted like that was the end of the world...probably because she could examine her wounds and remind herself that she got hurt. She was limping around for the rest of the day but didn't even complain about her head. 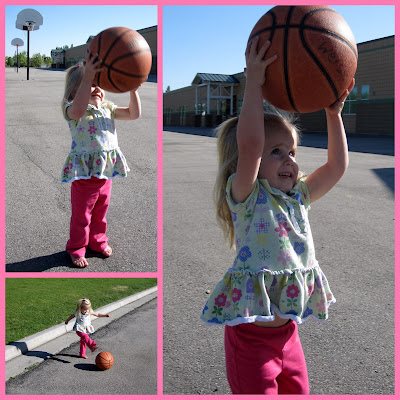 Rachel was determined to do the monkey bars by herself. She never quite succeeded in that goal but was pleased with her effort. She can make it to the second bar before she panics, can do the whole set of monkey bars when I hold onto her with one hand, and isn't afraid to drop down to the ground. 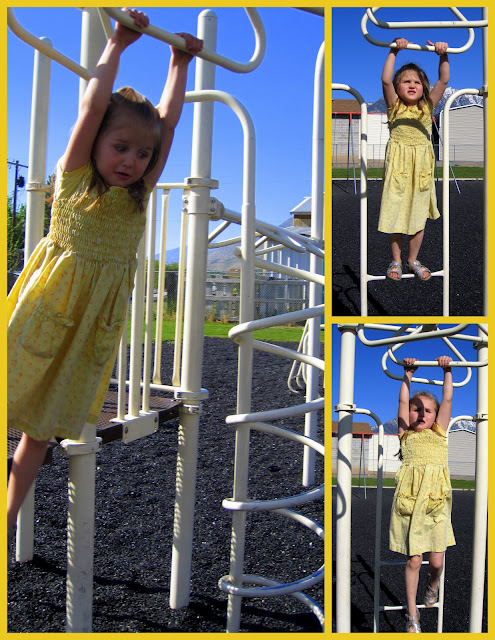 This set of monkey bars is a little high (and rather long) so she wants to try the monkey bars at "Naanii's Park," which are closer to the ground (and have fewer rungs). 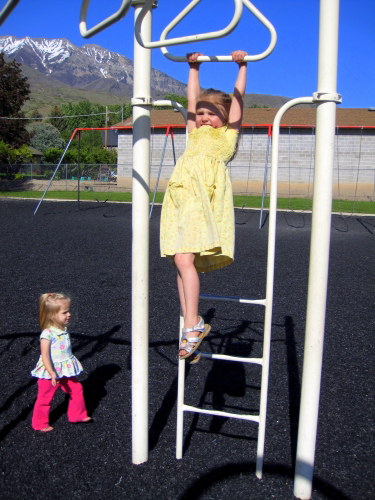 Miriam decided to try the monkey bars, too, but got up to the top of the ladder and then decided that she was much too short (she couldn't even reach the bars until I lifted her onto my shoulders). 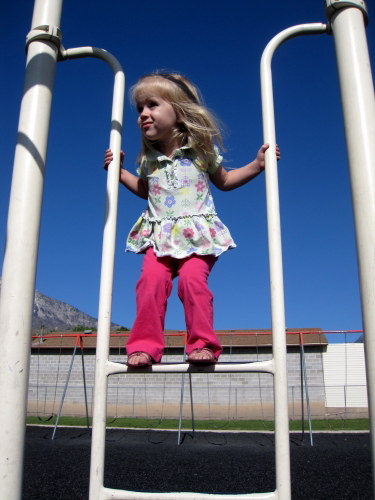 Rachel tried shooting hoops, too. Her method involved jumping and throwing at the same time (to make the ball go higher). She can actually get the ball pretty high up there...we're going to work on aim later. 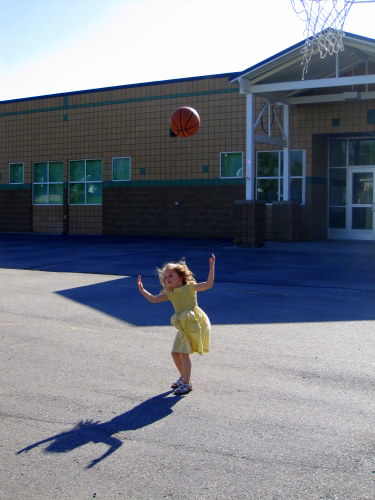 Mostly she just tossed the ball into the sky and then dodged it as it came back down.

We were at the park a lot longer than I intended to stay and the only reason I was able to convince the girls to leave was because Miriam was screaming in the stroller about her knee. Miriam was actually quite easy to convince at this point; it was Rachel I had to urge on.

(I just caught Andrew online before he went to bed (at 6:00/midnight) and said, "I can never get these girls to leave the playground!" and he said, "It's okay; it's good for them." And I think he's probably right but sometimes I'm like, "Dudes—dinner is not going to make itself! Can we just go home already?!" You know, like...today? That's how I was today.) 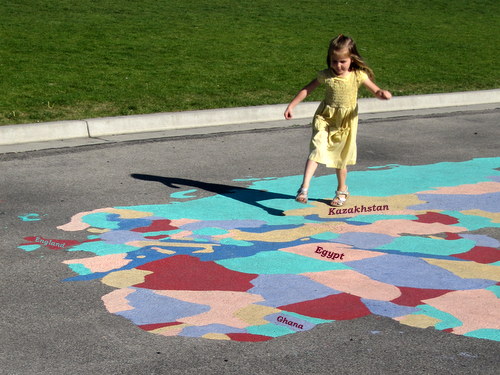 When we got home and had Miriam's knee all fixed up (with a Zoe bandaid this time—remind me to buy some more Sesame Street bandaids sometime because we're running low...while Miriam seems to be having more and more bandaid-worthy accidents. Coincidence? I think not.) the girls decided to play pioneers. Rachel wants to be "one of those people who, like, acts out pioneers stories like at Nauvoo or in Legacy" when she grows up. And Miriam's skirt isn't really that short; she just insists on wearing it that way—she's one of those immodest pioneers: 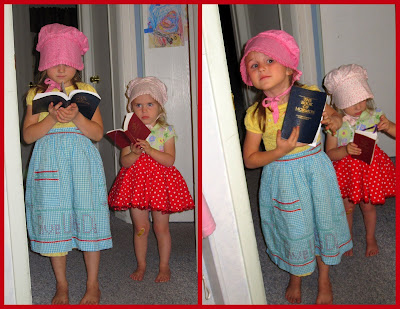 The girls sat around the house "reading" from The Book of Mormon. Miriam told Grandma, "And it came to pass that the Brother of Jared moved into a castle!" And Rachel said, "Well, mine doesn't say that!"

It's possible that I gave the girls a bath at 7:30 after throwing a frozen pizza into the oven...so we didn't eat dinner until around 8:00. But that only might have happened.

Then we might have read stories, including one called The Middle Child Blues, which made me a little nervous to have this third child because I just realized for the first time that our family will be big enough to have a middle child and...I don't know...it worried me for some reason. Because what if this baby comes and we neglect the other two beyond repair? Or what if this baby comes and we just can't love it like we loved the other two?

They're ridiculous questions, really, but the book was kind of a downer. At the end Rachel said, "Well, when Benjamin comes, at least I'll still be the oldest! Miriam—you're going to be the middle child. I'm sorry."

Miriam's too cute to forget about so I think she'll do just fine as the middle child.

And Rachel will always be the oldest (energetic, spunky, sweet) child, so she'll be just fine, too.

And we'll of course have enough love for Benjamin because love cannot be divided; it always multiplies—so he'll be just fine, too.