Today was a wonderfully relaxing day for me. Miriam and I walked Rachel to school in the morning and then came home to write a quick message to Andrew. Just when I sent the message he came online, which was rather surprising considering it was only around 9:30 in the morning (which would be about 3:30 PM in Ghana). They had just arrived at their hotel and he was setting up his room and decided to hop on the computer to see if we were on. And we were.

He took us on a little walk from his bed, out the door, to the beach. His room seriously opens up right onto the beach, complete with palm trees and breaking waves. It's beautiful.

We spent some time chatting and making silly faces (because it's impossible to have a Skype call without at least one silly face when you're Skyping with children): 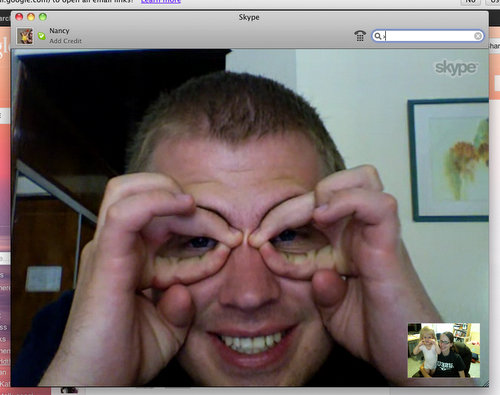 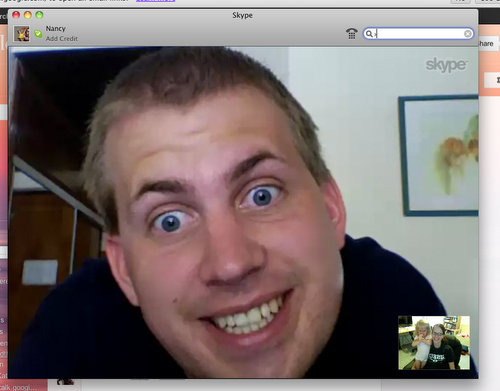 We let him go after a while so that he could go enjoy the beach with his co-travelers and so that we could get ready to go to playgroup. Grandma, though, suggested to Miriam that she go on a shopping trip with Grandma and that sounded like more fun to Miriam than playgroup today so off she went.

I spent the morning working on my mom's dissertation and neglecting the basket of clean laundry that needs to be folded and put away. I can't believe I'm saying this but after just two weeks after Andrew's finished his degree I'm already excited to have another project to work on. Maybe it's because I really just want an excuse to ignore the laundry but I enjoy having papers to edit. I'm just glad my mom waited until after he'd graduated to send me her dissertation because those last couple of weeks he was in school were kind of crazy.

When it was time to pick up Rachel I walked over to the school to get her but then Grandma surprised us by showing up at the exact same time. She gave us a ride home, we unloaded the groceries, had lunch, and then I put Miriam down for a nap and Rachel went to Salt Lake with Grandma to pick up some files for Grandma's job.

I spent some more time working on my mom's dissertation and then tried to take a nap but couldn't fall asleep (weird, I know). Miriam was ready to get up by the time I was ready to quit trying to fall asleep, anyway, so we both got up and found that Andrew was chatting to us to tell us that he was back from dinner and that we could Skype him at any time (since Rachel has been so desperate to Skype him and she was absent for this morning's call).

She walked in the door just as I was typing to tell him that Rachel wasn't home. So then we chatted with Andrew again. Rachel was a little sad that it was dark outside because she wanted to see the beach, too, but she had a fun time chatting with her daddy (making all sorts of plans for when he gets home). 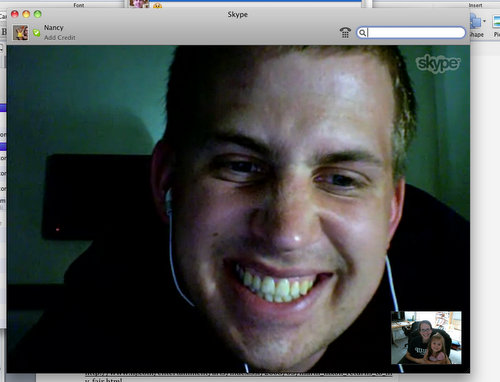 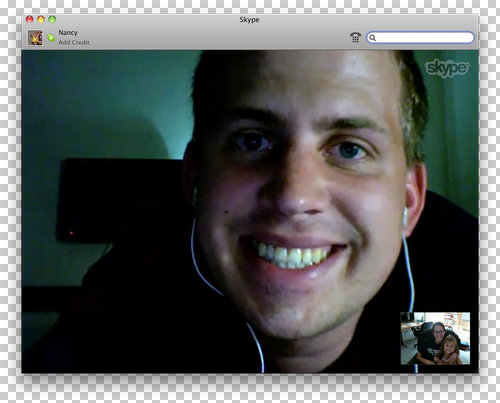 I'm sure he'll be very happy that we learned how to take screenshots today. I'm glad he'll be at this hotel for a while because they have the best internet connection in the world. Or at least in Ghana. Our call didn't drop once! It was amazing, especially considering that the idea of getting on Skype where Andrew was yesterday was a joke; we didn't even try.

After chatting with Daddy we got dinner into the oven and then played outside while it baked. Our neighbours have a maple tree of sorts and so our yard is covered with maple keys, which my children call helicopters but which are actually called samaras (who knew? ...not me). According to Wikipedia, "one tree can release hundreds of thousands of seeds at a time." Our yard is certainly evidence of that. 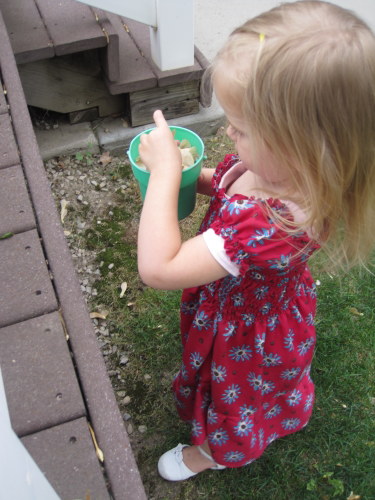 The girls each had a bucket that they filled with samaras—at first we had one bucket and we counted all the way to 100 before we gave up counting (but continued collecting). Eventually we had to get another bucket to fill as well. We must have picked up hundreds and there were still uncountable numbers of samaras nestling in the grass and resting on the deck.

When our buckets were all the way full we dumped them out from as high as we could get before racing around to collect them again. It was fairly entertaining. 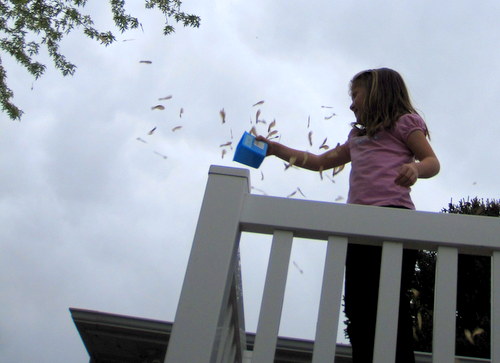 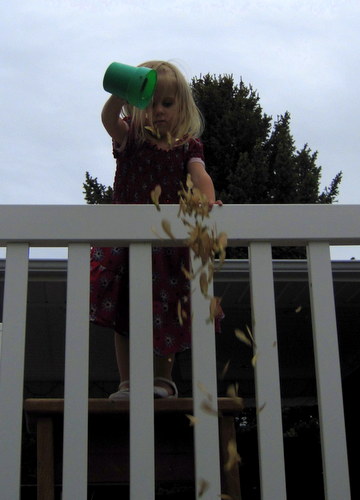